Day
10
of our trip around the world

Things to know about Barbados

Barbados is an island in the Caribbean and part of the Lesser Antilles. The island now has a population of about 280,000 and the capital is Bridgetown, home to a third of the population. Until 1966, Barbados was a British colony, so the official language is still English today. The highest mountain on the island is Mount Hillaby, which is 336 metres high. Barbados is sometimes referred to as the “land of flying fish” because you see them very often around the island and they are also the national dish. Barbados has a mild, tropical climate. The fact that it is not so hot is due to the constantly blowing winds. From the beginning of June to the end of November, the island is in the catchment area of the Atlantic hurricanes. The most famous sights include The Animal Flower Cave, Mount Gay Rum Refinery, Farley Hill National Park, Cherry Tree Hill, Morgan Lewis Mill Windmill, Turners Hall Woods Gardens, Harrison’s Cave and the capital Bridgetown.

The cruise ships dock at the Bridgetown cruise terminal in the southwest of the island. The harbour area is left by the harbour building, which is home to numerous shops as well as a tourist information office. From the harbour building, a 1.5 km long footpath (Princess Alice Hwy), some of which runs directly along the shore, leads to the city and to The city centre of Bridgetown.

A catamaran trip to Barbados

Since today was Christmas and we wanted to do something special, we have already booked a catamaran trip via Elegance Barbados Cruises from home. It is important to book in good time, especially in the high-season excursions in Barbados. Many of the tours we requested for the 24.12. were already booked out weeks in advance. We chose this excursion because it offers, among other things, the possibility to swim with turtles. 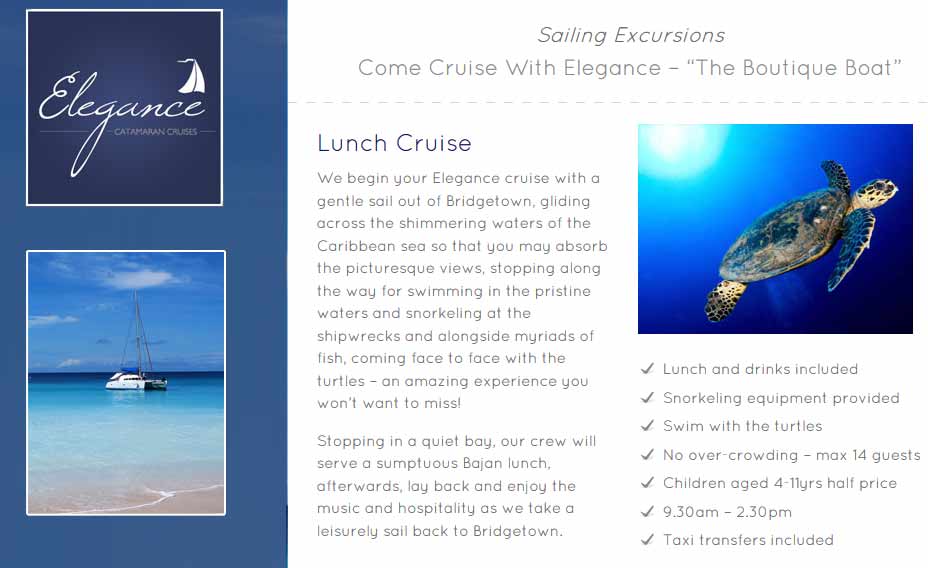 We were picked up by taxi with two other Carnival guests at 9.45am in front of the harbour and taken to Bridgetown Marina. Nine other guests were already on board, so that we could start right away.

Swimming with turtles at Pepples Beach

We had already reached our first stop of the catamaran cruise after 15 minutes: Pepples Beach in Carlisle Bay. Here was the spot to swim with turtles. So snorkel and mask up and down into the water, which was warm and very clear. And it didn’t take long for the first turtles to swam around us 🙂 Not so tingling we found that our guides fed the turtles again and again. The turtles were excited to get some of the food, because they seemed almost aggressive and hectic. But seeing the turtles so close was of course still a great experience!

Here is a little video of swimming with the turtles in Barbados:

The next snorkel spot was again only a short distance away. There were 3 different wrecks. It was the first time wreck snorkeling for us – which is quite nice, but did not knock us off the stool. When diving, this probably works a lot more, because you can go deeper and thus be at a height with the wreck.

Our next stop was on the west coast of Barbados. A 45-minute drive was ahead of us, where we could sunbathe and relax on the deck. Really weird to think about Christmas at 30 degrees in such moments. Arriving at the destination (Sandy Lane Bay), we anchored not far from a beach and a hotel where Rihanna probably has an apartment and the night costs just over 1500. We couldn’t really understand why we went there. The beach was nice, but rather commercial and nothing special for the Caribbean. We then had lunch on the ship and were able to go for a swim – snorkelling was not allowed due to jet ski traffic. We were the only two who got off board for a few minutes and swam to the beach. Everyone else has stayed on deck.

Our conclusion about the catamaran cruise in Barbados

As a conclusion, we can say that such a catamaran ride is of course something great – the Caribbean, the sun, the great colors of the sea… but the whole thing also has its proud price, at a price of 100 per per tonne. The highlight of the trip was definitely snorkeling with the turtles. The drive along the west coast to Sandy Lane Bay (where you couldn’t see or do anything special) we rather boring. On a next visit to Barbados we would rather explore the island independently by taxi or bus. Overall it was a nice Catamaran trip, but we would have liked a better selection of the sailed spots.

After the tour we went back to the marina of Bridgetown, from which we walked a bit through downtown Bridgetown to the Carnival to take some impressions of the capital. At the Cruise Terminal we had free internet for the first time since the beginning of the cruise, which we immediately used to send a few Christmas greetings. By the way, the internet at Carnival costs 0.75 US dollars… per minute! No comment…

Just before 5 p.m. we were back on the ship. Since today is the 24th of December, the crew of the Carnival has really put a lot of effort into conjuring up a Christmas atmosphere on the ship. There was a Christmas show, Christmas carols were sung and in the end they even let it snow in the lobby. On this special evening, we decided to visit the a la carte restaurant and let our Christmas Eve end comfortably with a bottle of wine and a delicious 3-course menu. In this sense: Feliz navidad 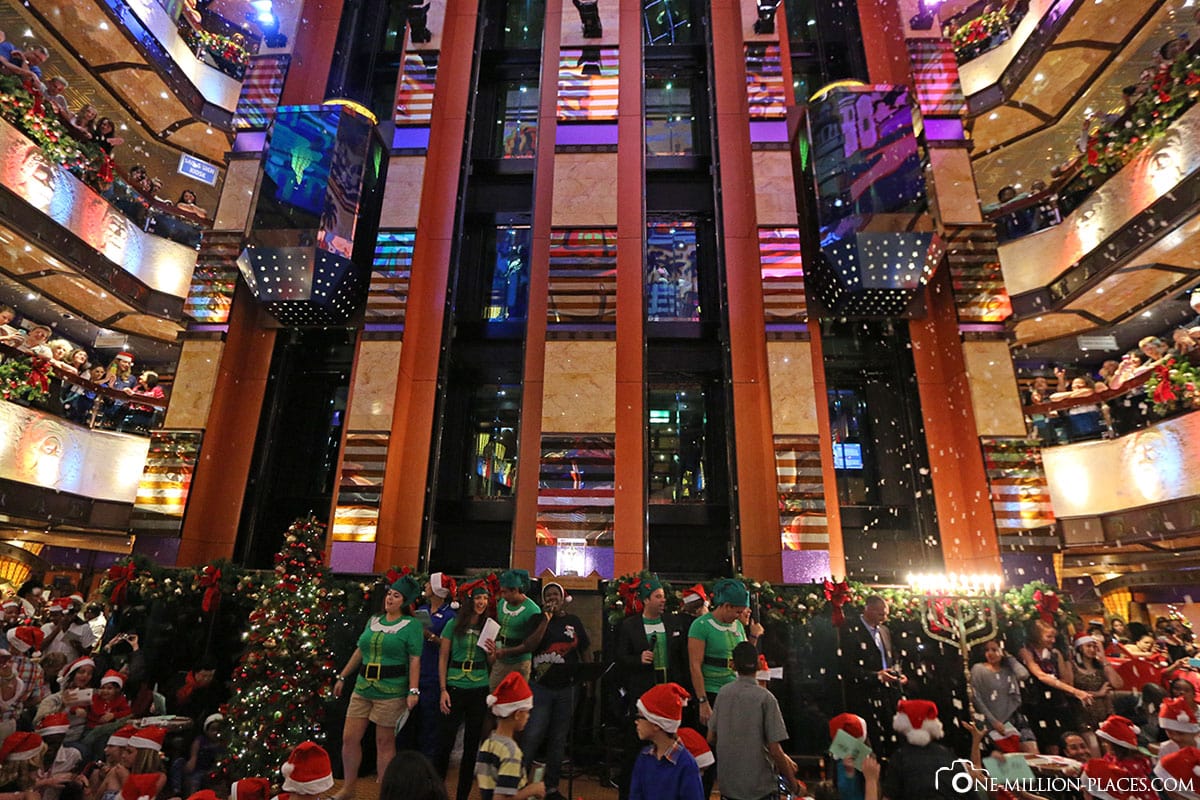 All travelogues from our Southern Caribbean Cruise

The Carnival Valor of the shipping company Carnival Cruise Lines has a capacity of almost 3,000 passengers and over 1,000 crew members. The ship, built in 2004, is 290 metres long, 35 metres wide and belongs to the so-called "Conquest Class". The Carnival Valor is a classic cruise ship that offers a wide range of entertainment. There is a huge theatre, a casino, numerous bars, a disco, a karaoke bar, sauna, jacuzzi, steam bath, a fitness centre with jogging track, two pools and several restaurants. Our route led us for 7 days through the southern Caribbean with stops in Puerto Rico, Saint Thomas, Barbados, St. Lucia. St. Kitts and St. Martin.