After exploring yosemite national park from the east via the Tioga Pass yesterday, we went from our Hotel in Mariposa to the south entrance of the park today first to the giant sequoias of Mariposa Grove.

The easiest access is Mariposa Grove near the south entrance of the park, off Wawona Road (Highway 41). At the Mariposa Grove Welcome Plaza visitor centre there is a large parking area for about 300 cars and motorhomes. From here you can use the free shuttle bus to the entrance of Mariposa Grove. Shuttle services will depart from 8 a.m. and run approximately every 10 minutes until 5 p.m.; in summer even until 8 p.m. Outside these hours, you can even drive your own car to Mariposa Grove; normally, this access is only accessible for buses. This is very convenient for winter time, as there is no shuttle service available at this time.

Things to know about the Giant Sequoias

Giant sequoias are native to the western slopes of the Sierra Nevada at altitudes between 1,350 and 2,500 meters. Since the giant sequoias in the natural distribution area are an endangered species, they are now mostly protected – as here in Yosemite National Park. Through breeding, the giant sequoia is spread worldwide outside its Californian homeland, for example as a park tree in western and central Europe.

Giant sequoias can reach heights of up to 95 metres and trunks with a diameter of up to 17 metres. Giant sequoias don’t grow quite as high as the coastal sequoias we saw in the Muir Woods near San Francisco. For this, they reach larger trunk diameters and are therefore among the most massive trees in the world.

The oldest giant sequoias are over 2,500, perhaps up to 3,900 years old. This makes giant sequoias among the oldest living organisms on earth. On the basis of their tree rings, which can be evaluated via a drill core, the age can be determined very well. The bark of the giant sequoia is fibrous, furrowed and can be 90 cm thick at the base of the column trunk. The bark provides the tree with considerable protection against fire damage. The leaves are evergreen, 3-6 mm long and spiral lyrical on the shoots.

Yosemite National Park: What to know & the Tioga Pass

Our tour of Mariposa Grove

In order to feel the thickness of the giant sequoias up close, you should definitely take a walk through mariposa grove.

A map of the hiking trails

There are different lengths of hiking trails through Mariposa Grove, from very short circular trails that last no more than 15 minutes, to longer hikes that can take half a day. On the side of Yosemite National Park you will find a beautiful mapin which all hiking trails within Mariposa Grove are marked. We chose the 3.2 kilometer long Grizzly Giant Loop Trail, for which we took about 1 hour, including the photo stops. 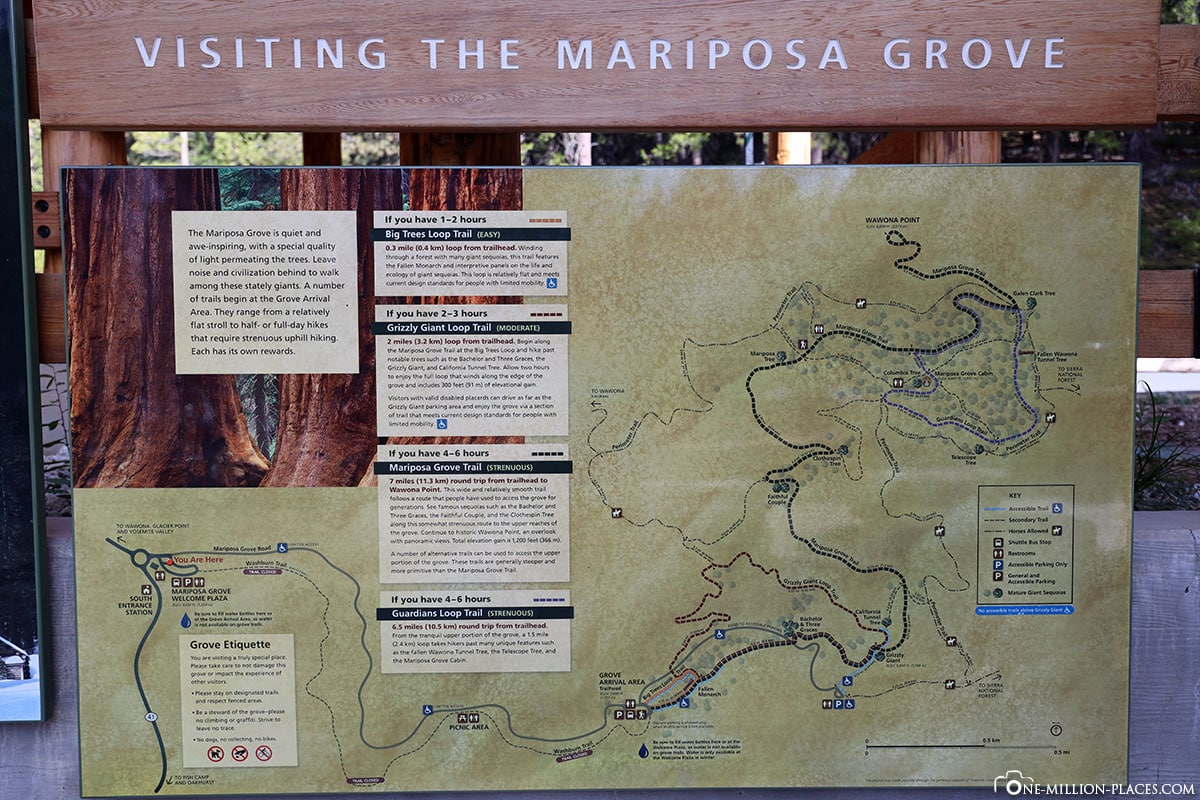 A map of hiking trails at Mariposa Grove

The first highlight on the trail is certainly the Fallen Monarch, which fell over here more than three hundred years ago and looks impressive. Since giant sequoias are resistant to rot, the Fallen Monarch is still very well preserved today.

Also impressive is the group of four trees named Bachelor & Three Graces, three of which grow very close together, and a fourth a little further away. Because the roots of the trees are so intertwined, one suspects that if one of them fell, he would probably take the others with him. It’s unbelievable how tiny you feel when you stand at the foot of such a tree 😉

The Grizzly Giant is the oldest tree and highlight at Mariposa Grove at 2,700 years old. With a volume of 963 m3, it is the second largest tree in Mariposa Grove and, according to Wikipedia, the 25th largest giant sequoia in the world living today.

The passage way through the California Tunnel Tree was opened in 1895 to allow horse-drawn carriages to pass through the tree. Of course, this was also a good measure from a marketing point of view, because with the help of this attraction you could already attract more visitors to the park. The California Tunnel Tree is currently the only living giant sequoia with a tunnel, after the disappearance of the Wawona Tunnel Tree in 1969 and the fall of the Pioneer Cabin Tree in 2017.

During our hour-long walk through Mariposa Grove, we saw other beautiful giant sequoias. And in the middle of all the huge trees you can sometimes see a little grey squirrel 🙂