After visiting the ghost town of Bodie in the morning, we set off for Yosemite National Park at around 12 o’clock. The eastern entrance of the park at Tioga Pass is only about an hour away from Bodie. On the way there we made a short stop at Mono Lake.

A short stop at Mono Lake

Mono Lake is a lake of soda,i.e. it is very alkaline and at the same time very salty. It is one of the oldest lakes in North America at an age of at least 760,000 years. Since 1941, drinking water has been discharged from the lake’s catchment area into a 520 km long water pipe of the Los Angeles Aqueduct, which supplies the city of Los Angeles.

A panoramic view of Mono Lake

Mono Lake has no natural drain, but only loses water due to evaporation. For this reason, many minerals accumulated in the lake, which were added via inflowing water. As a result, the salinity in the lake increased and the water became increasingly alkaline. The lake contains about 258 million tons of saltdissolved in the water. Due to the lowering of the water level, numerous submerged limestone formations were visible on the shore, which today shape the overall picture of the lake and are partly responsible for its fame and the many visitors.

Since the lake has a high pH, all animals and plants have to adapt to these harsh environmental conditions. Therefore, there are only a few adapted species here, but they occur in a high number of individuals. For example, no fish can live in Mono Lake. In the deep water areas there is phytoplankton, from which the crustaceans feed. As we stood on the shore of the lake, we immediately noticed the many black flies lying on the shore like a large black carpet. These are the so-called salt flies, which also feed on the phytoplankton.

The lake looks kind of surreal when you’re on the shore. Everywhere you can see slag cones and lime tuff formations that are reflected in the water – in between, however, thousands of salt flies romp. We only made a short stop here, took some photos and then drove on again. Shortly before the junction leads to Yosemite National Park, there is an information centre above the lake on the 395 federal road, where you can get an overview of the ecological significance of the lake and the history of the surrounding area.

Things to know about the Yosemite National Park

Yosemite National Park is a national park in the western Sierra Nevada of central California.

Yosemite was a central part of the development of the national park idea. The area of the present park was the first to be officially planned as a park by the U.S. government. The park was created in 1864 on the basis of California law and was created by Congress in 1890 as a larger national park that encompassed the valley and surrounding mountains and forests and paved the way for the national park system. The park was declared a UNESCO World Heritage Site in 1984 and is internationally known for its granite rocks, waterfalls, clear streams, huge sequoias, lakes, mountains, meadows, glaciers and biodiversity. Nearly 95 of the park are designated as wilderness. In the park you can experience a difference in altitude from 648 meters to 3,997 meters and drive through five main vegetation zones.

On average, about 4 million people visit Yosemite National Park each year; in 2016, there were even more than 5 million visitors for the first time. Most of them spend most of their time in Yosemite Valley.

Yosemite National Park is open 24 hours a day, 365 days a year, and no reservations are required for the visit. However, the Hetch Hetchy entrance station is only open in daylight and some roads such as the Tioaga Pass are closed from November to May/June due to weather conditions (e.g. snow).

For a normal car you pay 35 US dollars entrance fee. However, this ticket is also valid for 7 days and you can go out and in as many times as you want. If you visit Yosemite National Park a lot, an Annual Pass is worth an annual pass for 70 US dollars. If you want to visit other national parks in the U.S., you can buy an “America the Beautiful- National Parks and Federal Recreational Lands” pass for only 80 US dollars and thus also have one year free admission to the cooperating national parks.

In the USA, there are always several days per year on which admission to the national parks is free. In 2019, for example, there are four such dates: January 21 (Martin Luther King Jr. Day), April 20 (First Day of National Park Week), September 28 (National Public Lands Day) and November 11 (Veterans Day)

A map of Yosemite National Park 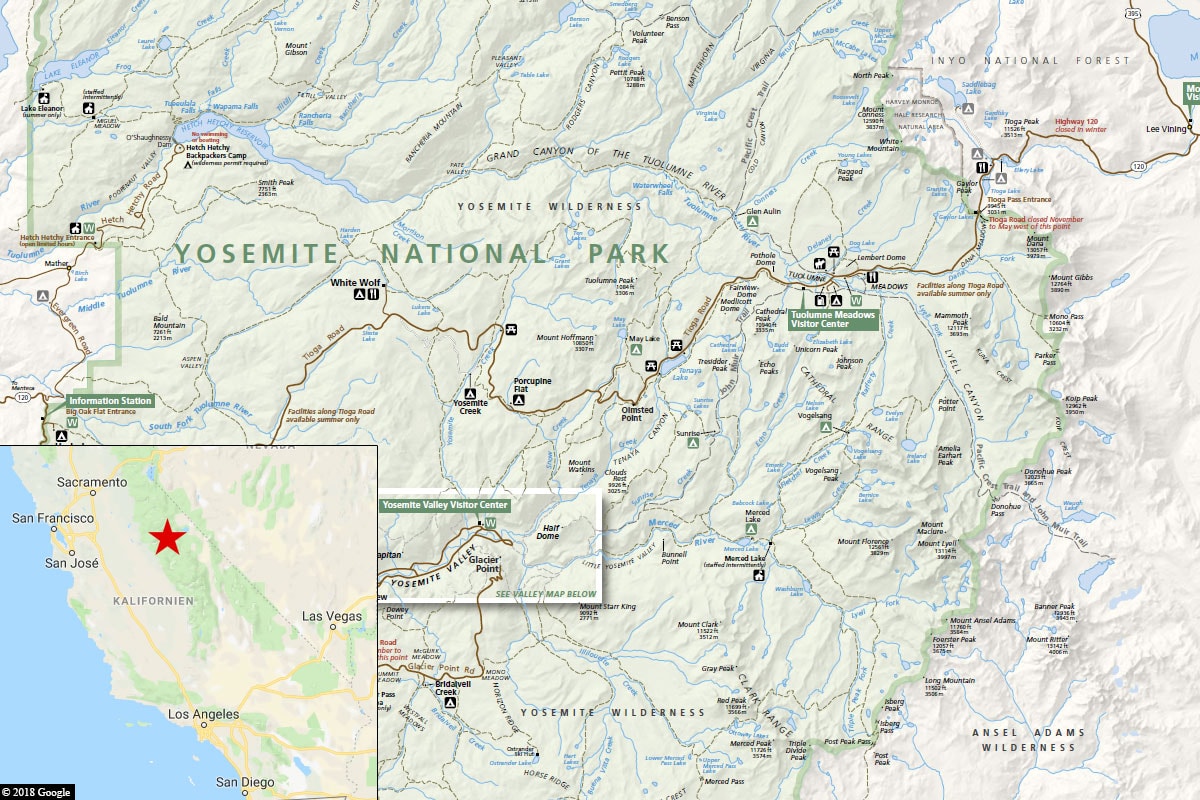 A map of Yosemite National Park in California

Accommodation within Yosemite National Aprk is limited. There are really very few hotels, such as The Majestic Yosemite Hotel, Yosemite Valley Lodge, The Redwoods In Yosemite or Wawona Lodge. For these hotels you have to reach deep into your pocket (several hundred dollars per night), especially in the high season from April to September. In addition, there are 13 campsites in the park. Half of the campsites have to be reserved in advance and the others have the “first-come, first-served” rule.

Of course, an overnight stay in the park has the advantage of saving yourself the long way out and into the park. But if 15 to 60 minutes of extra driving doesn’t matter, you will also find good accommodation for good value for money on the edge of the park (e.g. in El Portal) and a little further away (e.g. in Mariposa, Mammoth Lakes or Oakhurst). For example, we stayed in Mariposa because we didn’t want to pay as much and we didn’t mind the extra kilometres.

The most famous sights

These are the most visited attractions in Yosemite National Park:

(1) Yosemite Valley: Yosemite Valley is world famous for its impressive waterfalls, steep cliff faces and unusual rock formations that can be reached via many beautiful hiking trails.

(2) Glacier Point Road: The road leads to Glacier Point, a viewpoint with stunning views of Yosemite Valley, Half Dome and the Yosemite Highlands.

(3) Wawona and Mariposa Grove: The Mariposa Grove of giant sequoias is located 36 miles south of Yosemite Valley and about two miles from the park’s entrance to the south. The nearby Pioneer Yosemite History Center in Wawona is a collection of historic buildings associated with the people and events that have shaped the city.

(4) Crane Flat and Tuolumne Grove: Crane Flat is about 10 miles from Yosemite Valley and offers beautiful walks. In Tuolumne Grove you can also see giant sequoias, but they are smaller than the slightly more familiar ones in Mariposa Grove.

(5) Tuolumne Meadows and Tioga Road: Tioga Road offers a 39-mile scenic drive past forests, meadows, lakes, granite rocks and through the highlands of the Sierra Nevada.

To the west of the pass is Tioga Road, where you will always find beautiful viewpoints with fantastic views of the surrounding area. The Tioga Pass is closed in winter due to high snow masses. Depending on the weather conditions, it will be open from May/June and will be closed from October/November. We were here at the end of October and were really lucky with the weather. At times we could even walk around here in a T-shirt… of snow was not visible far and wide 🙂

Lembert Dome is a 240-metre-high granite dome formation near Tuolumne Meadows, north of Tioga Road. Climbers and hikers can reach the top of the dome directly from the car park via a short, steep path. You will be rewarded with a spectacular view of tuolumne Meadows and the surrounding peaks.

Tenaya Lake is an alpine lake located at an altitude of 2,484 meters and is a popular lake for water activities.

At Olmsted Point you should definitely stop, because from here you have a beautiful view of the national park and the surrounding mountain peaks.

The Half Dome Viewpoint on Big Oak Flat Road

If you drive along the Big Oak Flat Road towards Yosemite Valley, there is a beautiful viewpoint on the right side of the road, from which you have a great view of the Half Dome.

Our hotel in Mariposa

Since the accommodation in the national park was too expensive for us, we booked accommodation outside yosemite national park. So we still had to drive out of the park for about 45 minutes to get to our hotel. But we didn’t mind, because the price difference was already considerable.

We had booked a room at the Quality Inn Yosemite Valley Gateway in Mariposa for two days and were very pleased with our choice. The parking was right outside the room door, it was clean and breakfast was also included in the price of 85 € per night. 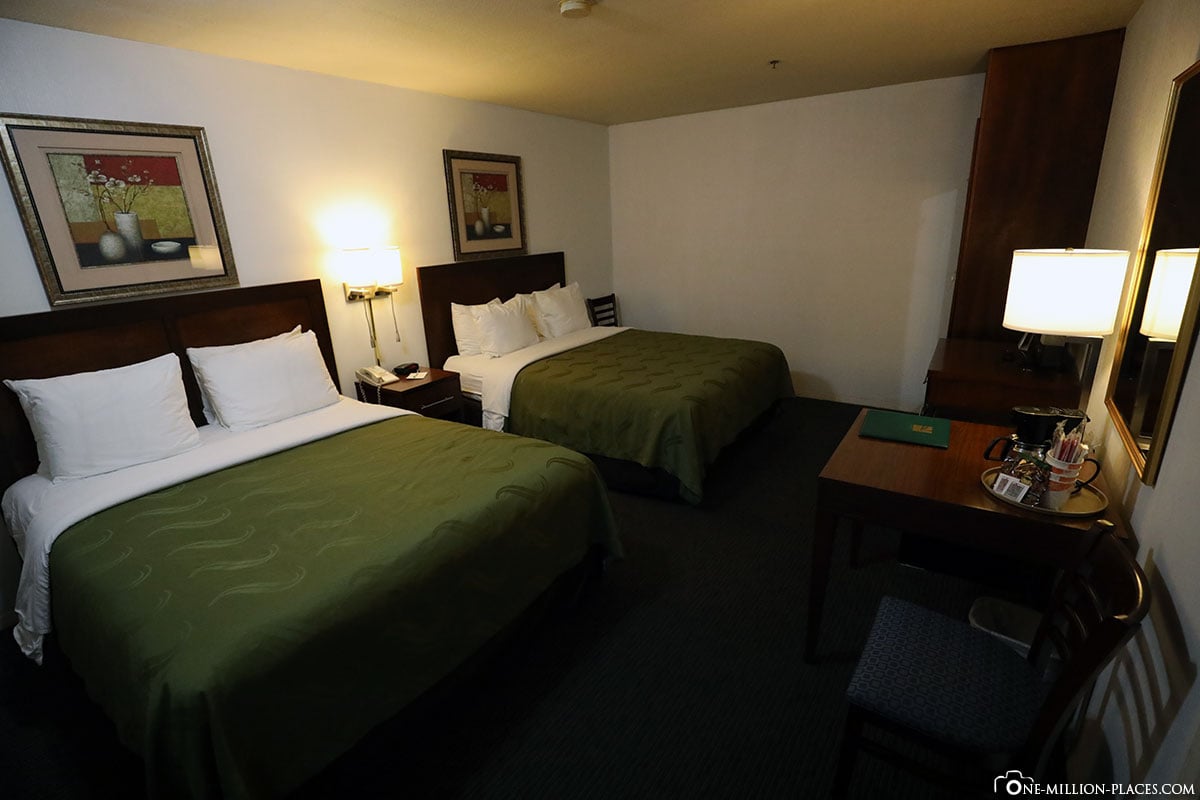