Not only the city of San Francisco has a lot to offer, but also a little away from the city you can experience and look at a lot. Our excursion today took us to the Muir WoodsBiosphere Reserve, which is located north of San Francisco.

The Muir Woods National Monument – or simply “The Muir Woods” – is an area that protects the last living specimens of the coastal sequoia that covered many Northern California coastal valleys before the 19th century. The coastal sequoia is one of the highest tree species on earth. In the Muir Woods area, which covers an area of 2.1 km2, some of the trees are almost 1,000 years old and rise up to 79 metres straight into the sky. 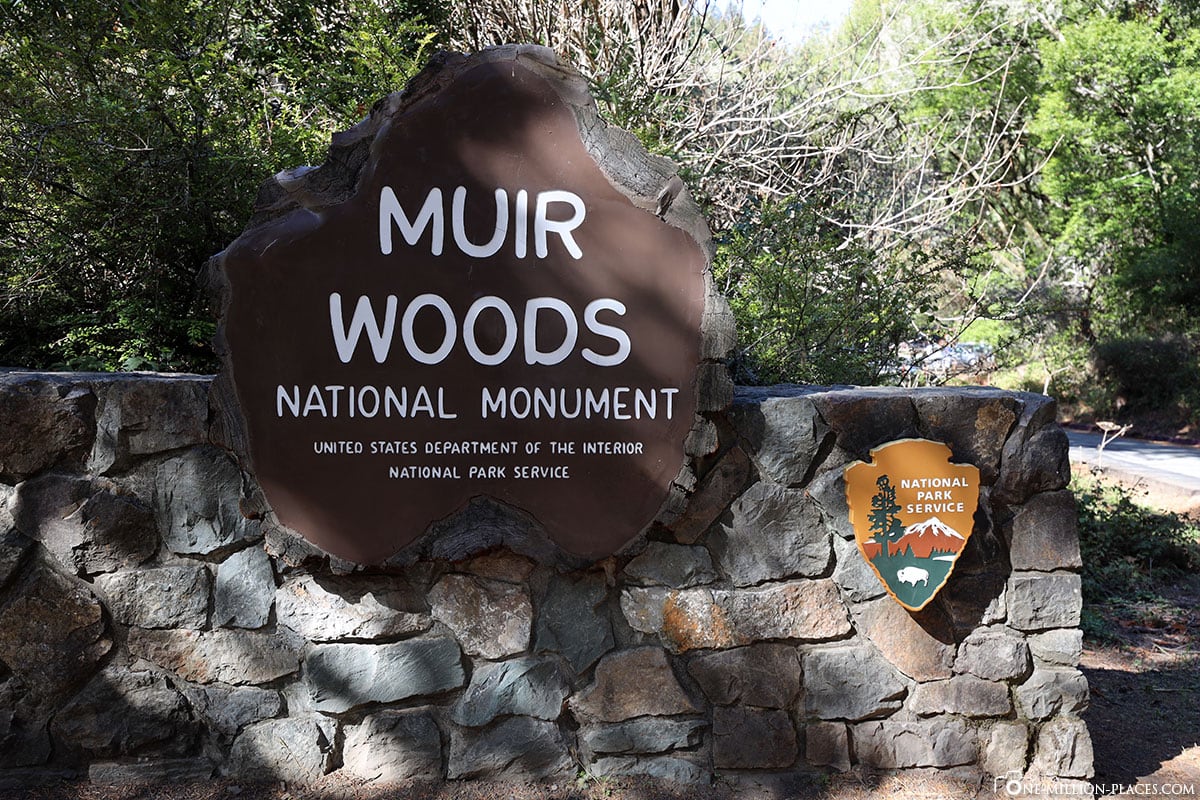 The history of the National Park

In 1905, local businessman William Kent and his wife Elizabeth Thacher Kent privately bought land in the area to save the last trees of this species from felling. They transferred 120 hectares of the area to the Federal Government for a purpose in order to ensure the protection of the trees permanently. In 1908, the area was founded by President Theodore Roosevelt and declared a national monument. The Muir Woods, at the request of William Kent, still bear the name of the conservationist and naturalist John Muir.

The Muir Woods, like other parts of San Francisco, are part of the Golden Gate National Recreation Area and are managed by the National Park Service. In 1988, UNESCO declared this recreational area and other adjacent protected areas a biosphere reserve. Today, the Muir Woods provide a home for 380 different plant and animal species, including 27 species of mammals, 50 birds, 12 reptiles and 5 amphibians. Between the huge trees flows Redwood Creek, home to the silver salmon and rainbow trout.

Every year, more than 1.1 million guests visit this special forest.

Where are the Muir Woods? 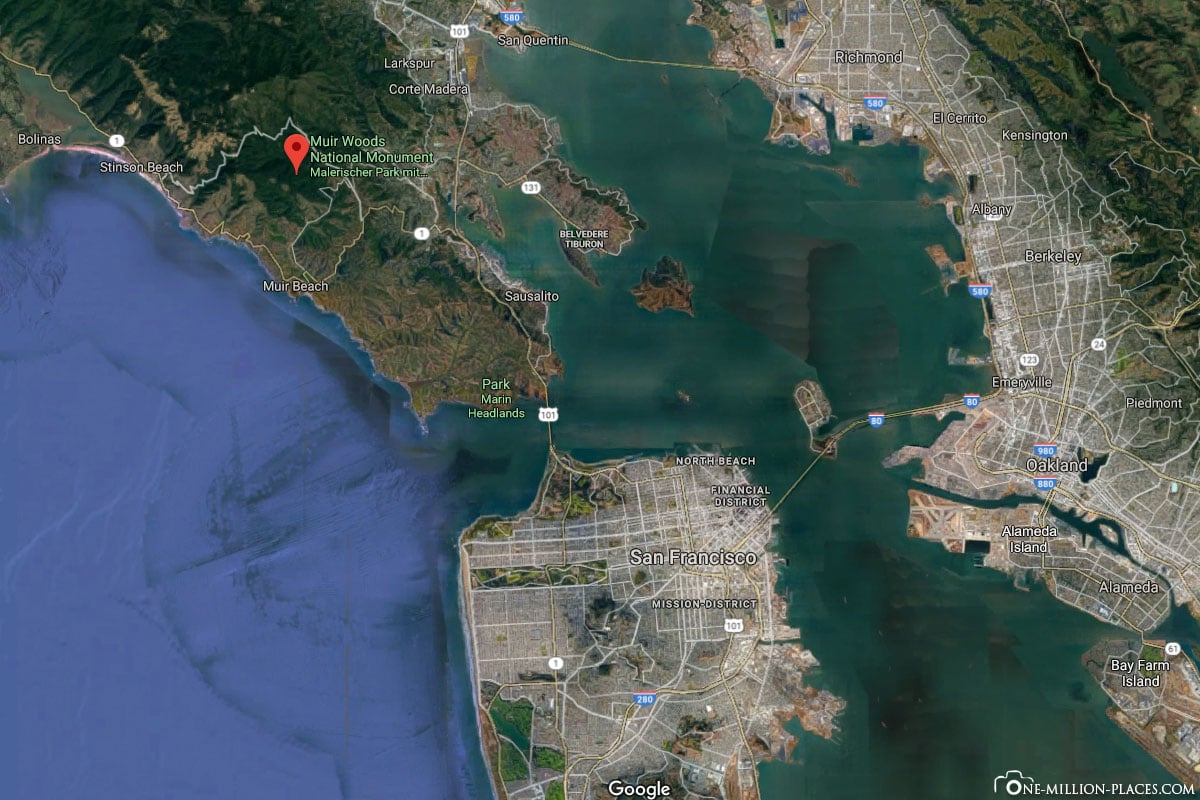 The location of Muir Woods north of San Francisco

Per person, the entrance fee is 10 USD. If you own an “America the Beautiful – The National Parks and Federal Recreation Lands Pass“, you can also enter the park for free. Alternatively, you can buy the pass here for 80 USD. The pass provides one-year access to more than 2,000 national parks and forests, nature reserves and historic sites in the country. There is usually free admission to US national parks on certain days of the year, such as Martin Luther King Day (21 January) or Veterans Day (11/11). It is best to go to the side of the corresponding parks and inform yourself there on a daily basis.

How to get from San Francisco to The Muir Woods?

From San Francisco, many paths lead to the Muir Woods:

With your own car or car rental

The most flexible way to travel by car is probably the most flexible. However, it should be noted here that there are only about 230 parking spaces for private vehicles. In addition, an impromptu visit to Muir Woods has not been possible since 2018. These must be reserved in advance on gomuirwoods.com’s website gomuirwoods.com and cannot be purchased on site. When making reservations, you must already set a specific time to be issued for a time window of 30 minutes. The parking spaces are within walking distance of the parking entrance – depending on the location of the parking lot, it takes shorter or longer. For a parking reservation you currently pay 8 USD per car.

You can also get to Muir Woods by public transport. Simply take one of the ferries or one of the Marin Transit buses to get to the stops of the Muir Wood shuttle buses (Pohono Street Park & Ride car park, Sausalito Ferry Terminal and Marin City Hub). However, it is important to note that the shuttle does not run every day, but only on all weekends and public holidays. In addition, the Shuttle from Sausalito and Marin City also operates on weekdays during the summer peak season. The exact times are best informed on the page gomuirwoods.com. On the same page you can also buy the tickets for the shuttle, which you also have to reserve in advance. A return ticket costs USD 3 per person.

There are other bus connections from San Francisco to the Muir Woods, but we have read that these are not so easy and can take over 2 hours.

With a tour operator

With a tour operator, a trip to the Muir Woods is probably the most comfortable, because you are dropped off right in front of the park entrance and don’t have to worry about anything else. We had decided on a tour with Big Bus, which costs 65 USD per person including admission.

Our tour to the Muir Woods started on time at 9 am at the Big Bus Tours Visitor Center in Fisherman’s Wharf. From here we drove about 45 minutes to the Muir Woods, but in between we also made a short photo spot of 10 minutes at the Golden Gate Bridge Vista Point.

Our bus driver kept telling interesting facts about San Francisco, so the trip was also very entertaining. Upon arrival at the park entrance we got our tickets and were able to move individually through the Muir Woods for about 1.5 hours. Afterwards we went back to the city. In total, the tour lasted about 3.5 hours.

Things to know about the coastal sequoias

The Muir Woods are known for the coastal sequoiasthat live here. Trees of this tree species can reach heights of up to 115 meters, making them the highest specimens of trees currently living on Earth. In the Muir Woods they are not quite as high; the tallest tree here is nevertheless a stately 79 meters high and several hundred years (up to over 1,000 years) old. Insanely impressive when you imagine what these trees have already experienced.

The coastal sequoia is one of the best timbers due to its exceptional dimensions, durability, strife and technical characteristics. For this reason, these trees were also very heavily cut down in the past. In the shade of these trees, other tree species also grow in the Muir Woods: Douglas pines, the Californian nut, the American redlet, the Californian laurel, the Oregan maple, the stone fruit oak, the Californian horse chestnut, the apple berry and the strawberry tree.

The coastal sequoia is native to coastal areas of Northern California and southern Oregon. The largest occurrences of coastal sequoias are currently in Redwood National Park and Humboldt Redwoods State Park.

Our tour in the Muir Woods

We had about 1.5 hours for our individual walk through the Muir Woods. Here you will find various maps in which the different tours in the Muir Woods are drawn. We decided on the longest round-up, because we wanted to run everything. Of course, there are also endless other hiking trails, for which it takes several hours to days.

Since we were here one morning in the middle of the week, the park was not so insanely full of tourists. Of course there was something going on, but you also had sections where there was no human being and we could take beautiful photos in peace. Since there is hardly any sun on the way, it was very fresh at first – but you got used to it quickly. Part of the path leads through elevated plank paths, which are supposed to protect the sensitive root structure of the trees.

What was always beautiful was the play between light and shadow. Individual rays of the sun have tried to make their way through the trees and then beamed beautifully into the forest. Otherwise, we have actually looked up all the time to understand the size of the trees 😉

For the entire route, which is indicated in the map with 2 miles and 1.5 hours of hiking, it took us about 75 minutes.