Our fourth stop on our celestyal cruise cruise in the Aegean Sea today was the island’s capital Heraklion (Iraqlio), which is located on the north coast of Crete. Today we had a great programme on our agenda: a beautiful mix of history, culture and sightseeing. In a small bus with just six other guests we left the port of Heraklion at 8.30 in the morning to the palace of Knossos.

Things to know about Crete

Crete is the largest island of Greece and after Sicily, Sardinia, Cyprus and Corsica the fifth largest island in the Mediterranean. The island has a population of over 620,000 people and, together with Rhodes, Kos and Corfu, is one of the most popular destinations in Greece.

The island has a rather elongated shape and stretches from east to west over 260 km. At its widest point, the island is up to 60 km long and narrows to up to 12 kilometres in other places. The 1,066 km long coastline offers fine sandy beaches, emerald bays, lagoons and dunes. In addition, the island is characterized by a mountain range of more than 2,400 meters high (Psiloritis massif or Ida mountains), which runs from west to east. The highest peak of the massif is called Psiloritis or Timios Stavros at 2,456 meters. 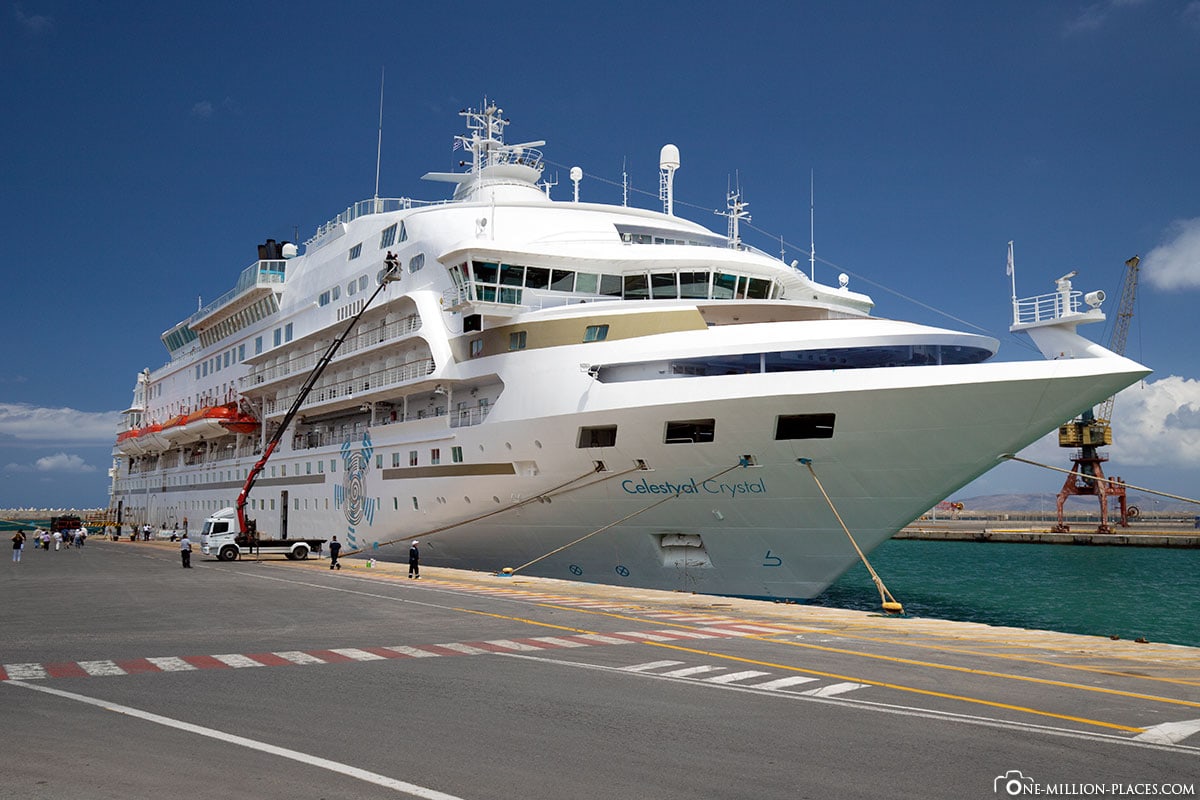 Our cruise ship Celestyal Crystal in the port of Heralklion

Minoan culture is considered to be the earliest European high culture, the centre of which is Crete. From here, the culture spread throughout the Aegean Mediterranean. The Minoans invented the first European characters and built the first streets of Europe as well as palaces, water systems and a large fleet. Through a flourishing trade with ancient Egypt and the Middle East, they were able to afford this prosperity.

The Minoan period stretched from 2800 to 900 BC and is divided into four temporal sections: 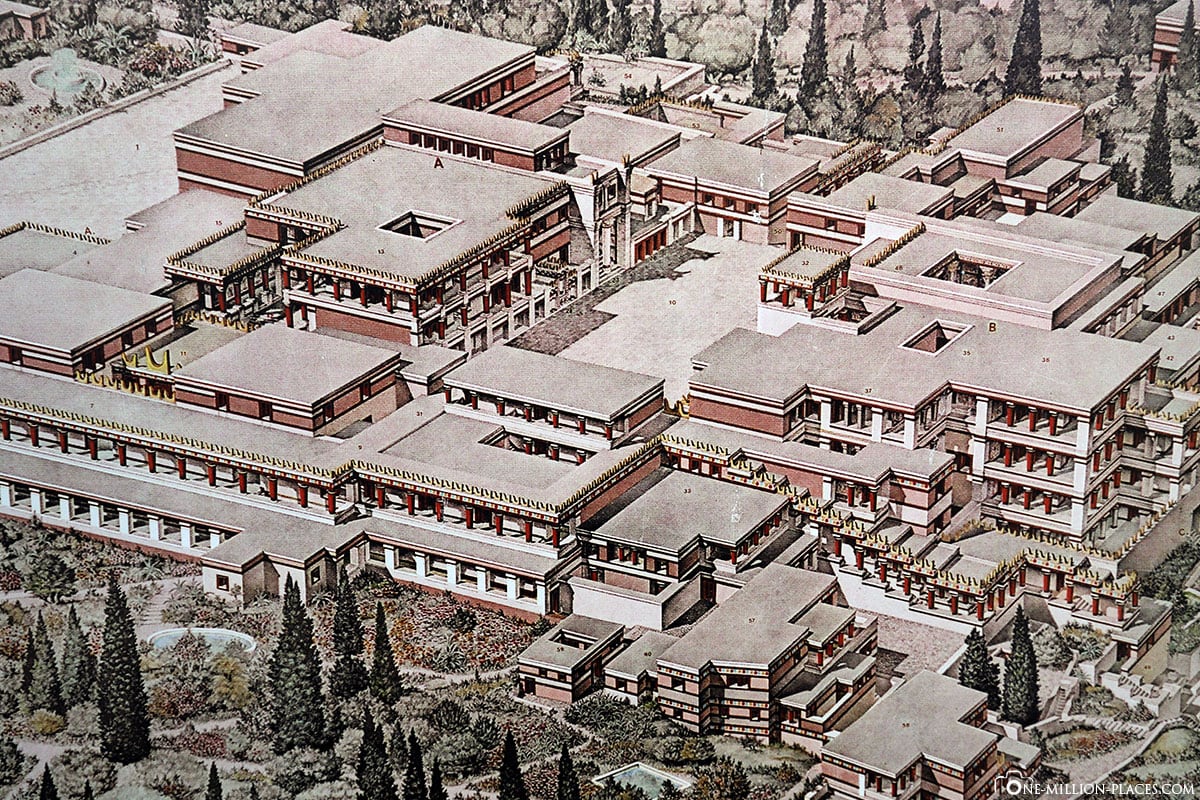 Drawing of a reconstruction of the palace of Knossos

The Palace of Knossos

Our first port of call today was the archaeological site of Knossos, which is only a 20 minute drive from the port and is considered to be the most important archaeological site in Crete. The bus parking lot was packed within minutes and large grapes of tourists have already formed in front of the entrance of the site. Since our group was very small, we could always scurry past the larger groups quite well, so that we still had enough space to look at the excavations. The normal entrance fee for the Palace of Knossos is currently 15 Euros (as of May 2018). If you also want to visit the Archaeological Museum in Heraklion, a combined ticket is worthwhile, because you pay only 1 euro more and can visit both sites.

The ancient city of Knossos was already settled in very early epochs. The first traces of Anatolian immigrants were probably already in the 7th millennium BC. The city is best known for the palace of Knossos, the largest Minoan palace in Crete. The palace was built between 2100 and 1800 BC on the site of the first settlement. The palace was destroyed by a severe earthquake between about 1750 and 1700 BC, but was quickly rebuilt on the old foundations. Knossos developed into a leading Cretan city-state at that time and became a religious and political center of the island. Around 1400 BC, the last palace of Knossos was destroyed by fire, as were many other Cretan settlements. The palace was abandoned after the destruction, but the city of Knossos remained settled even after the destruction.

Since its discovery at the end of the 19th century, the palace has also become known worldwide. The exploration of the palace and the corresponding excavations were led by the British archaeologist Sir Arthur Evans, who had previously bought the property, as he suspected the ruins of the palace here. The ruins of a magnificent palace with many frescoes came to light. Evans had large financial resources, so he began to rebuild the palace of Knossos. This also earned him much criticism from other archaeologists, because Evans had some parts of the ruins reconstructed into buildings that he thought were originally, i.e. he created buildings that corresponded more to his imagination than to history. Evans’ ambition was to give visitors an idea of what the Palace might have looked like in the past. In order to ensure the longevity of the reconstructions and to preserve the rooms before weathering and decay, he used concrete as a building material.

The last palace of Knossos consisted of an ensemble of buildings with up to 1,300 rooms and was built around a rectangular central courtyard. In the courtyard, narrow corridors, elaborate stairwells and galleries met, which were not laid out in any fixed arrangement. There were countless stairs and ramps as well as doors and passageways that could connect the rooms by means of movable interior walls.

Most tour groups have flocked to the Throne Room, one of the highlights of the palace. An alabaster throne was found during the excavations, which gave the hall its name. At the northwestern edge of the complex you can still see a stairway, which might have been a theater for up to 500 people in the past. If you walk across the excavation site, you should bring enough imagination to see the former splendor of the palace from the isolated ruins.

The reconstructed north entrance of the palace of Knossos

Our most beautiful photo motif on the entire palace grounds was the reconstructed north entrance on the palace grounds. Of course, you never really know if the entrance might have looked like this, but we were still impressed by the building. Especially in the great weather, the colors have shone very nicely. 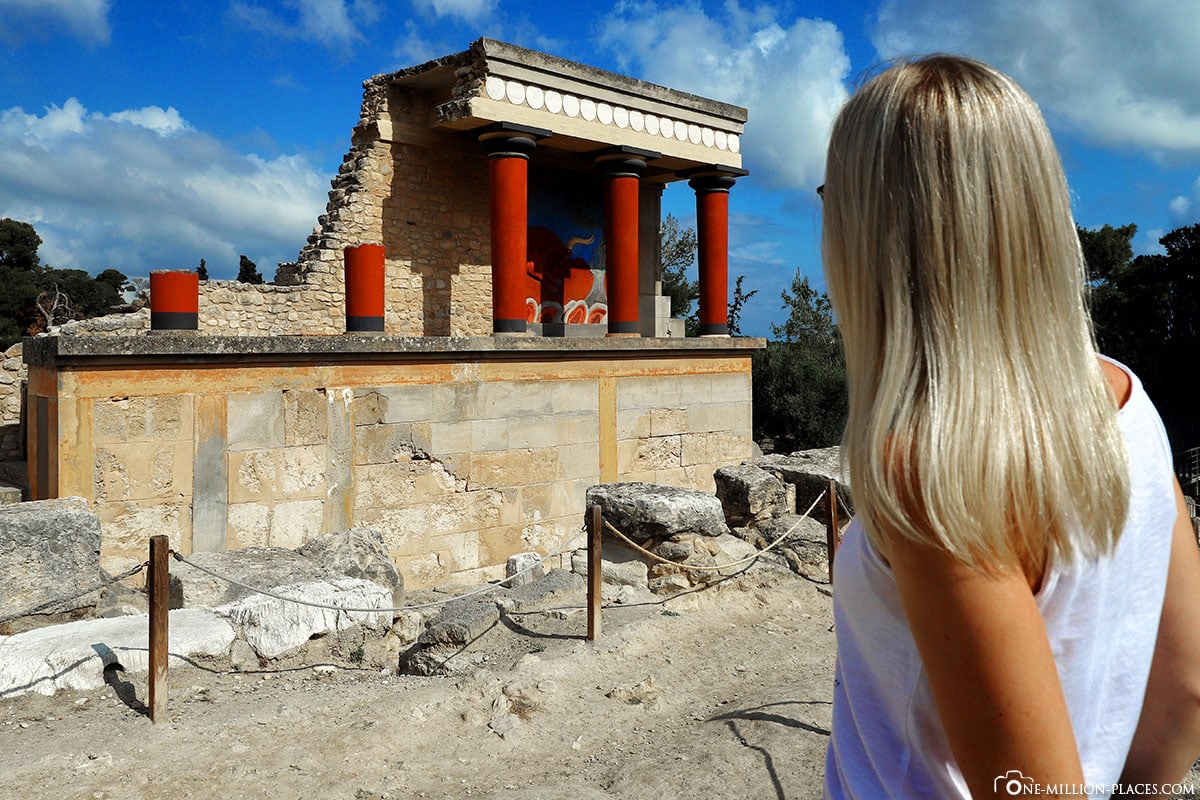 Reconstructed north entrance of the Palace of Knossos

The Archaeological Museum in Iraklio (Heraklion)

Our next stop was the Archaeological Museum in Iraklio (Heraklion), one of the largest and most important museums in Greece. In the 20 rooms you will find countless artifacts from all periods of Cretan history, including a unique Minoan collection. Among the most important exhibits is the discus of Phaistos, the bull-head rhyton, the little snake goddess and the Golden Bee pendant of Malia.

There are several Starbucks stores in Crete and a cup of 🙂

The Starbucks Island Cup of Crete