After Mykonos today the island of Milos was the second stop of our cruise with Celestyal Cruises. Our ship was the only cruise ship on the day, so the flow of tourists was limited. With the tender boat we went from the ship, which was located on Reede, to the port of Adamas. From here we started our bus tour to the highlights of the island.

The island of Milos

Milos is a Greek island with just 5,000 inhabitants, located on the southwestern edge of the Cyclades. The shape of the island is a bit reminiscent of a horseshoe with a natural bay inside. Milos is not one of the more well-known islands of the Cyclades and therefore it is not as crowded here as on Mykonos or Santorini. And yet the island is worth a trip. 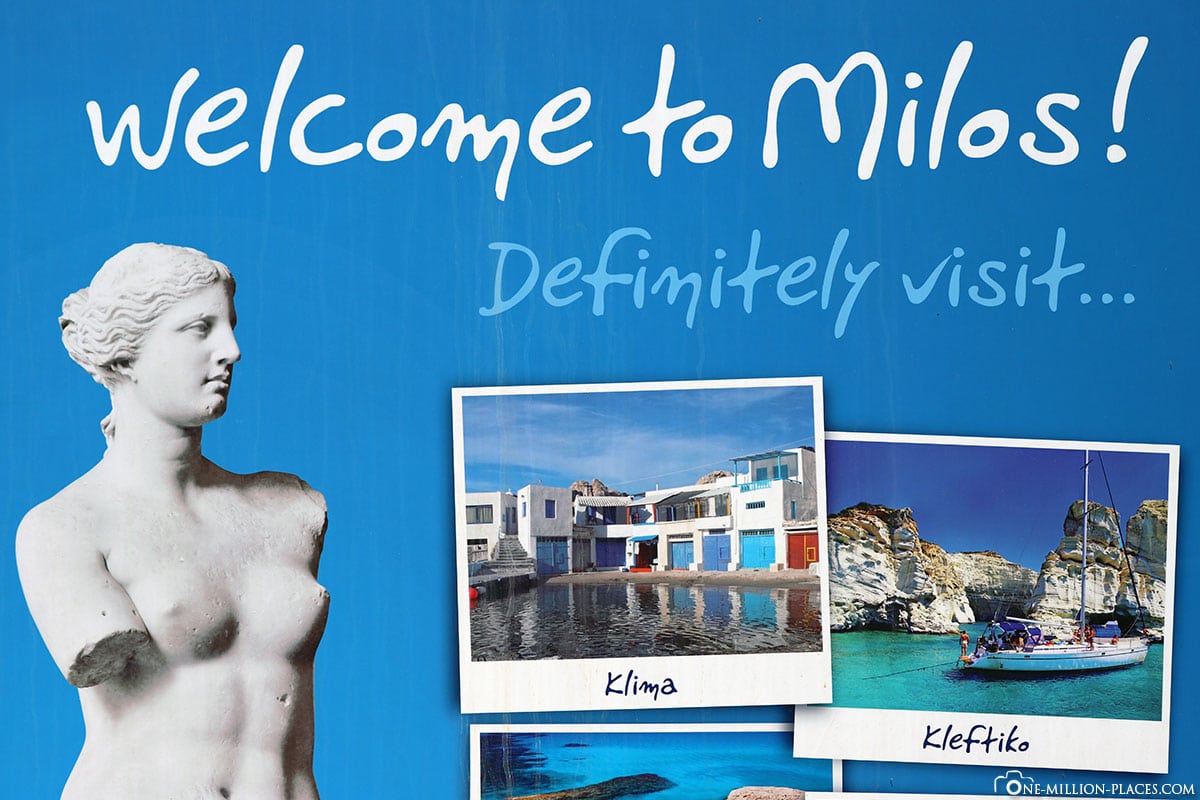 Welcome to the island of Milos

The Mining Museum on Milos

The first stop on our island tour today was the Milos Mining Museum, an award-winning mining museum. Our tour guide told us with enthusiasm about the (mining) history of the island, which is of volcanic origin. On the ground floor there are a whole series of photographs, paintings, maps and tools on display that give an insight into the mining history and activity of Milos. In the premises on the 1st floor various minerals are presented, which are found on Milos. The volcanic soil of the island was and is rich in minerals, which provide the island with a good source of income. Today, the main minerals mined on Milos are bentonite, perlite, puzzolane, pebbles, kaolin and small amounts of baryte. Some samples of materials can also be seen in the museum. In addition, an extensive collection of obsidians can be seen in the museum. This volcanic glass is formed when liquid lava meets cold water and immediately cools down. We found it particularly interesting to see the illustration of a volcanic eruption on which one sees the different layers of the earth and chambers.

Our next stop on the island was Papafragas Beach, which is actually rather a large cave, which was worked out from the rock. A small, lateral path leads directly down the cave wall to a small strip of sand. The turquoise and crystalkare water looks very tempting here.

On the other side of the gravel parking lot is the archaeological site of the ancient city of Phylakopi. From the parking lot you can see the remaining ruins of a wall. The rest of the city’s ruins are now under the sea surface. In the adjacent archaeological museum you can also visit various objects, such as pots and statues.

The highlight of today’s tour was definitely Sarakiniko, a landscape that we look like from another world: wind and water have brought the white volcanic rock into quirky and fascinating shapes that reminds a bit of a lunar landscape. The white rocks enclose a beautiful bay with crystal clear, blue-green water. In order to be able to take really nice photos here, you should come here very early in the morning – once for better light and secondly there are no tourists on site. Unfortunately, we were here at lunchtime; not necessarily the most ideal time for good photos. 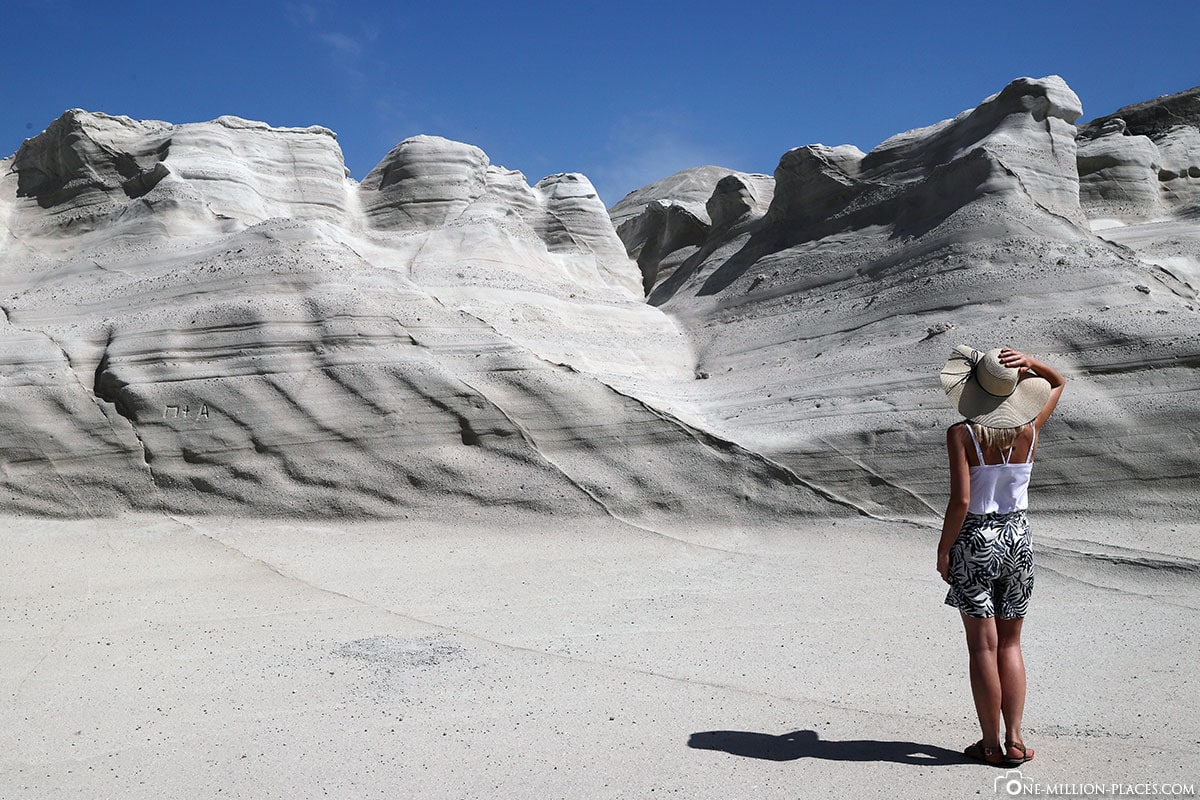 The moonscape Sarakiniko on Milos

The Venus of Milo

The island of Milos is famous for the statue of Aphrodite (also called “Venus of Milo”) which was found in April 1820 by a Greek farmer near the ruins of a Roman theatre on Milos. The 2.02 metre high marble statue depicting the goddess Aphrodite was built at the end of the 2nd century BC and is now on display at the Louvre Museum in Paris. Near the site there are still the remains of an ancient Roman theatre,which was built in the 3rd century BC by the inhabitants of the city of Klima. After a destruction, the theatre was rebuilt at a later date and attracted about 7,000 spectators. Some remains of this can still be seen today. There are even regular music events here.

The capital Plaka on Milos

Our journey took us to Plaka, a classic Cycladic village and today’s capital of the island of Milos. The small village is perched 250 metres above the Aegean Sea. We had a bit of time to walk through the cobbled streets; past white stone houses and colourful bougainvillea flowers. Here you will find small traditional shops, restaurants and cafés. From the marble courtyard of the Cathedral Panagia Korfiatissa you have a beautiful view of the bay of Milos. Above the city there are still remains of a Venetian castle from the 13th century – but unfortunately we could not visit them anymore due to time constraints.

Our last stop for today was a visit to a local shop called Kivotos ton Gefseon, which is located in the village of Pollonia. The products are made here according to traditional recipes without preservatives and are handmade to 100. Of course we were allowed to taste some of the homemade things.

With the tender boat we went from the port in Adamantas back to our ship Celestyal Crystal. The day was very varied and we saw a lot. But the view of the map revealed to us afterwards that we only saw a small fraction of the whole island and actually only stayed in the north of the island. We would have liked to have seen more from the island if time had allowed. 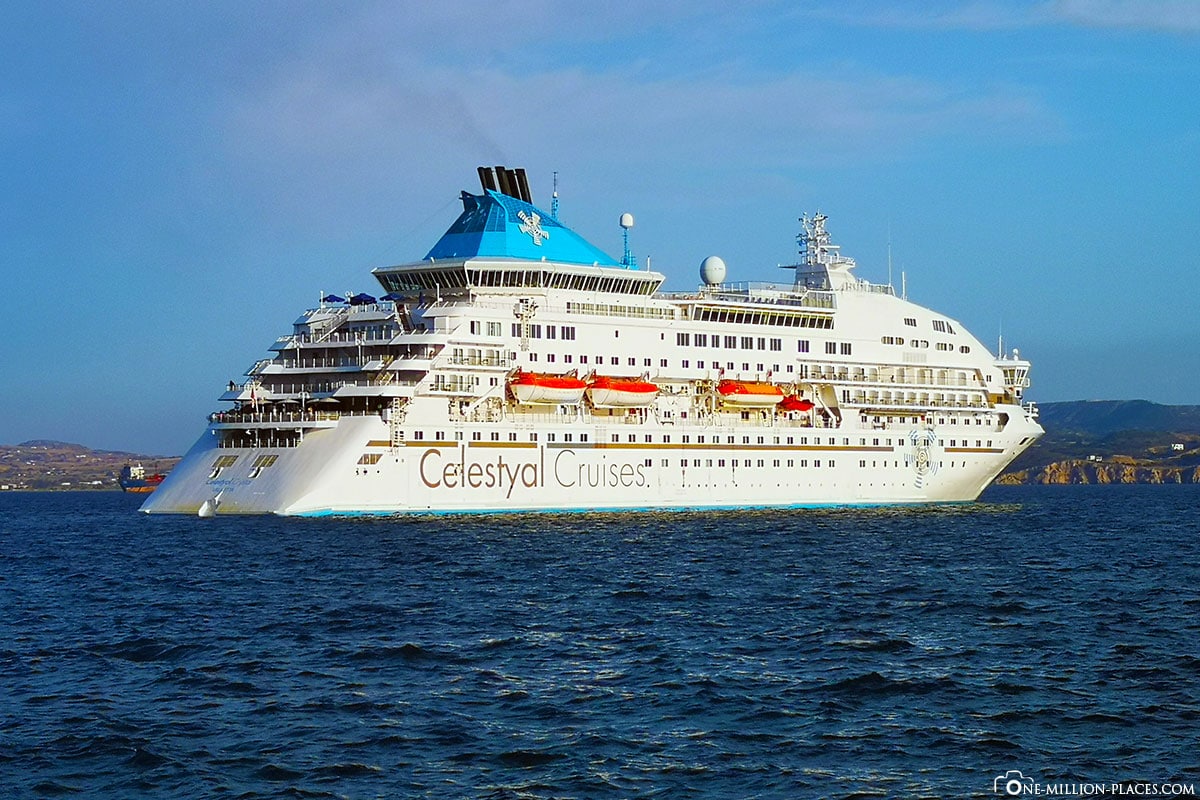 The Celestyal Crystal in front of Milos