After we swam with dolphins on the west coast this morning, our tour went on to the east coast of Mauritius. From here we went as part of the tour “Roman’s Eastcoastdream” with the speedboat en the coast to the island of Ile aux Cerfs and at the end there was again the opportunity to snorkel in the Blue Bay.

Today’s tour is a combination offer that Roman Duda offers every Tuesday. The full day tour then consists of (1) swimming with dolphins and (2) then an east coast boat tour. The tour costs 6,500 rupees per person incl. Transfer from/to the hotel (approx. 170 EUR).

Roman Duda came to Mauritius many years ago as an enthusiastic scuba diver and then built a diving center there. He now lives with his Mauritian wife and daughter in the north of Mauritius. He has various tours in the program, from private island tours to swimming with dolphins to boat tours. All tours of Roman and its cooperation partners are insured according to the legal requirements. Furthermore, Roman has all the necessary certificates and permits to offer these tourist activities. There are many providers who do not have this and still offer such tours for tourists. Most of the time, these are agencies that offer the tours more cost-effectively. You should be careful with whom you book such tours. If you would like to book a tour with Roman, you can contact him here.

Our boat tour along the east coast of Mauritius

Transfer & start of the tour in the Blue Bay

Since Roman had a private tour in parallel to our tour today, we were placed in the care of his employees after the dolphin swimming. Our driver took us from Tamarin Bay on the west coast to Blue Bay on the east coast of Mauritius. Here our boat including the English-speaking skipper Jeff was already waiting for us. After a short welcome, we roared at a decent pace and floated almost above the water, which glistened in a variety of shades of blue.

In order to be able to quench the thirst in the hot weather, there were free, chilled drinks on the boat, such as water, cola and beer.

The route of the tour

The boat tour lasted about 6 hours and took us first from the Blue Bay to an old shipwreck on the outer reef and then on past the protected island of Ile aux Aigrettes. The first stop was on the island of Ile aux Fouquets for about 20 minutes to visit the old lighthouse. Dannach continued the journey to the great waterfall of the Grand River South East. The last part of the route was the island of Ile aux Cerfs. Here we had lunch in the southern part of the island before continuing to the beautiful sandbanks in the northern part of the island. Here we could relax on the beach for about 1 hour and explore the island before returning to the Blue Bay by speedboat. The last part of the Eastcoastdream tour included a short trip by glass bottom boat and a snorkeling stop at Blue Bay Marine Park.

The first stop by boat was after only a few minutes at the shipwreck of the Dalblair at Pointe D’Esny, whose remains still protrude from the water today. The Dalbair was a 1.5 tonne steel ship that left Cardiff in November 1901 with a coal load bound for Mauritius. On February 4, 1902, it reached the southeastern seas of Mauritius, but was surprised by an unforeseen cyclone and a related weather change. Eventually, the ship was at the mercy of strong winds, hitting the reef at Pointe D’Esny. Some of the crew was still able to save themselves; for some crew members, however, any rescue was too late. Unfortunately we couldn’t get really close to the wreck with our boat due to the low water depth and the currents or wave movements.

After we drove for a while on the water, we passed the Ile aux Aigrettes (“Island of the Silver Heron”) and made a short stop here in front of the island so that Jeff could tell us a lot about the island. Since 1965, the Coral Island has been a nature reserve,which has been managed by the Mauritian Wildlife Foundation since 1985. The 26-hectare Ile aux Aigrettes is located about 1 kilometre southeast of Mauritius and serves to protect and breed certain endemic and endangered animal and plant species in Mauritius. On the island there are some signposted paths and discovery trails, where you can observe the Aldabra giant tortoises and the Telfair-Skink, among others. It should only be noted that you are not allowed to enter the island without prior registration.

The old lighthouse on the island of Ile aux Fouquets

On the Ile aux Fouquets there is a lighthouse built in 1864, which was supposed to guide ships that had arrived safely into the port of Mahébourg. Therefore, the island is often referred to as Lighthouse Island. After the port operation in Mahébourg was stopped by the British and it was moved to Port Louis, the lighthouse was abandoned and fell into disrepair over time.

We stopped right in front of the island and were able to walk to the island to take a closer look at it. As soon as we had set the first foot on the island, it started to rain like crazy. But fortunately, such showers are usually only of short duration, so that 10 minutes later there was already the most beautiful sunshine. We took a short lap around the old lighthouse and at one point let our drone go up. It was a bit of a joke because the wind was very strong, but it was still able to keep up well in the air for a few minutes. The bird’s-eye view is always beautiful, isn’t it?

The waterfall on the Grand River South East

Around 11.45 a.m. we entered an inlet, which was already heavily frequented by tourist boats. This stop is included in most day trips that go to the Ile aux Cerfs – that’s why there was so much going on here.

When we crossed the river, we felt a bit like Borneo when we had a boat trip there a few years ago on the Kinabatangan River and suddenly the elephants came out of the jungle. Here on the Grand River South East (GRSE) in Mauritius, the shore has also grown beautifully and it is incredibly green. There are no elephants here, but monkeys that have seized an old ship.

The highlight at the end of the inlet is the GRSE waterfall,where the 34 km long Grand River South East flows into the sea. Huge masses of water flow down the rocks and mix with the salty water of the sea. Our skipper tried to get really close to the waterfall and fight against the current. And that worked really well, because we could feel the spray up close here.

Lunch on the beach

So slowly our stomach snarled and we were already looking forward to lunch and were very excited where we will take it. For this we went to the southern tip of the Ile aux Cerfs. On a small stretch of beach Jeff left us out of the boat and we were warmly welcomed by our cook. She then showed us our place for our lunch. And that was really surprising – a table for us 6, lovingly decorated and overlooking the beach and the crystal clear water. Fantastically beautiful!

As a starter there was freshly fried tuna and herb salad, as a main course chicken and lobster and as dessert fried banana. Everything freshly prepared and made from local products – super tasty 🙂

Relaxing on the island of Ile aux Cerfs

From our lunch beach we drove around 1.30 p.m. to the main beach of the island of Ile aux Cerfs. When we arrived at the small port of the island, we quickly realized that the island is the tourist hotspot par excellence. One catamaran lined up next and the island was full of tourists. This is not entirely surprising, because the Ile aux Cerfs is known for its beautiful white sandy beaches and the turquoise blue water. We tried to quickly move away from the crowded places and looked for a quieter spot where we could hold our feet a little bit in the water and let our drone rise.

On the 1.2 kilometer long and 600 meters wide island there is also an 18-hole golf course and plenty of water activities, such as parasailing. If you like it a little quieter, you can enjoy a fresh, cool drink at the most beautiful bar in Mauritius 🙂 After about an hour on the island we all met again at our boat and went back to Blue Bay.

Our drone pictures of the island of Ile aux Cerfs

Here we have some of our drone shots from the beautiful island of Ile aux Cerfs in Mauritius.

A glass-bottom boat trip & snorkeling in the Blue Bay

After we arrived back at Blue Bay, our skipper Jeff dropped us off and we boarded a glass bottom boat right next door. With this we drove a few meters and were able to snorkel for about 30 minutes in the Blue Bay Marine Park. We got the equipment from our guide so that it could start right away. But disillusionment quickly spread with us, because unfortunately there was not much to see here. Maybe we’re a bit spoiled by all our worldwide dives and snorkeling trips, but the underwater world in the Blue Bay didn’t really inspire us. And the bay is considered the most beautiful spot for snorkelling in Mauritius. The most exciting were the many Damselfic ones that were all around our boat. Around 3.45 p.m. we were back on the shore and an hour later in our hotel. It was a wonderful day, which was very varied and eventful. 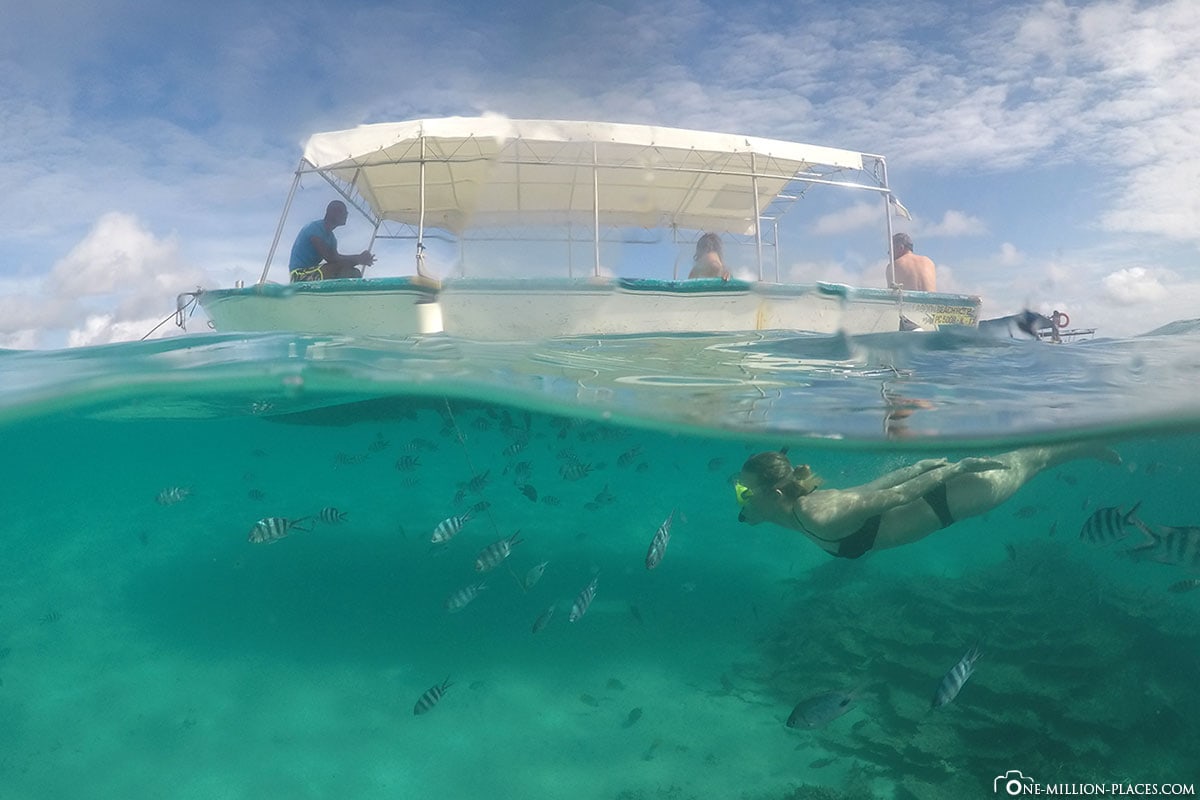 Diving in the Blue Bay

Our video of today’s day tour

Here you can get some impressions of our tour “Swimming with Dolphins” in Tamarin Bay and the subsequent boat tour “Eastcoastdream” along the east coast of Mauritius: