It is one of the most striking mountains in Mauritius and offers a dreamlike backdrop on the Le Morne peninsula: the 556-metre-high Le Morne Brabant mountain. We no longer know who of us both came up with the idea of going to this mountain. But we know one thing: even if it was super exhausting – it was definitely worth it. Every single step.

Place of fate of the slaves

Mauritius has a very varied history, including slavery. In 1639, the first slaves from Madagascar came to the island to work on the sugar cane and tobacco plantations. Also in the following century, when the trade with the French began, numerous other slaves from other parts of Africa but also from India were brought to the island. Before slavery was abolished under British rule in 1835, Mount Le Morne Brabant became a refuge for runaway slaves. The mountain offered them a good hiding place, due to its steep cliffs, its isolated location and its forest, so that they build small settlements on the summit and in the caves of the mountain slopes.

On February 1, 1835, the day slavery officially ended, the army was sent to the mountain to tell the slaves that they were now freed. The slaves, however, thought that they would be brought back and, out of sheer desperation, preferred to plunge themselves to death. Since this tragedy, February 1st has been celebrated in the Creole Society in Mauritius as a holiday for the end of slavery. 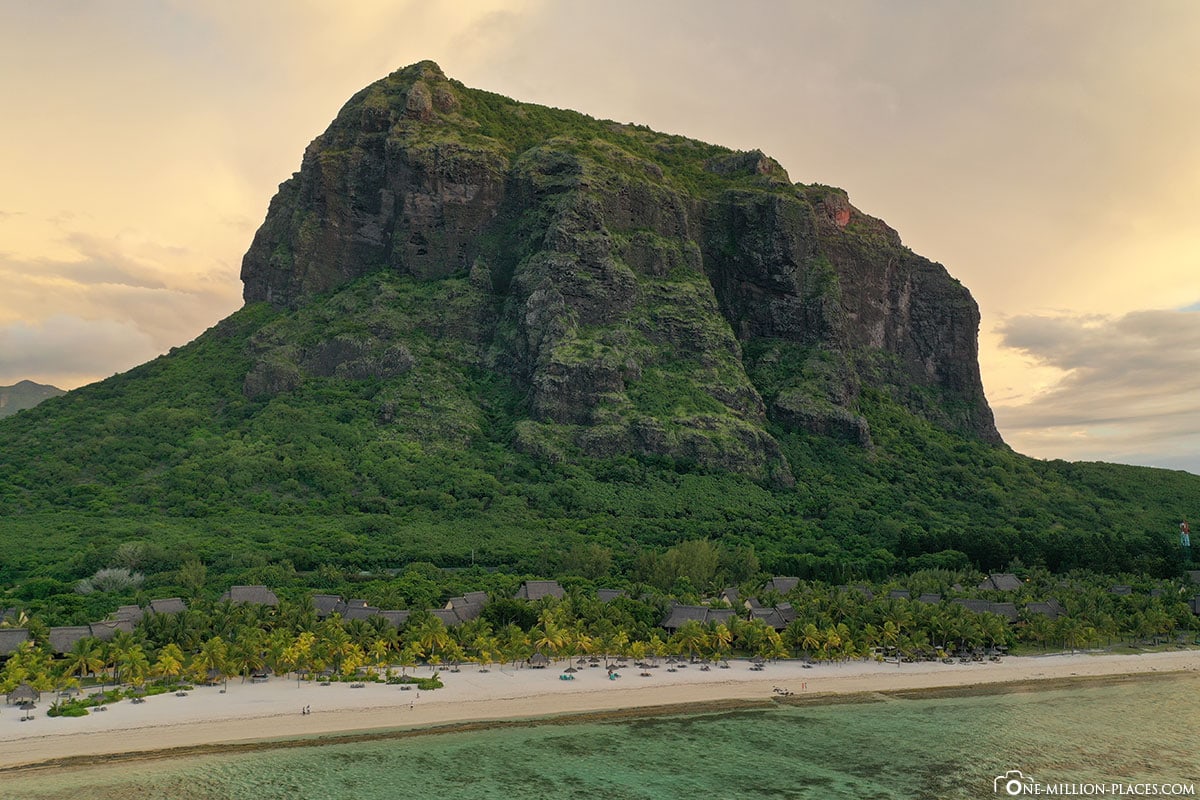 The view of Le Morne Brabant from Hotel Dinarobin Beachcomber

A guided tour or hiking yourself without a guide?

In preparation for our hike, we often stumbled on the Internet to the question of whether you absolutely need a guide if you want to climb the mountain or whether it is even illegal to walk the way alone without a local guide. We have also inquired on the spot again and it is the case that it is not illegal to go the way alone. It is still recommended to take a guide, as he knows the paths better and can better estimate risks. But in principle it is up to everyone to decide whether they want to take a guide or not.

We decided to go the way without a guide and were happy about this decision in hindsight, because in this way we were able to determine our own pace and allow ourselves time.

Shortly before 6 a.m. we set off from our Hotel Dinarobin Beachcomber Golf Resort & Spa on our way to the foot of the mountain. From the Le Morne peninsula there are two ways to get to the starting point of the hiking trail. Both are not paved roads, but gravel roads. The best way to take the route is to turn off the B9. You can park directly at the entrance gate free of charge. By the time we arrived, there was another car.

The official opening hours are from 7 a.m. to 4 p.m. in the afternoon. But you can also walk le Morne outside of these times. Entrance to the grounds of Le Morne Brabant and its ascent is free of charge. However, the land on which the mountain stands has been privately owned for centuries. But the mountain itself, we have at least understood it, is in the hands of the state.

The 3.5 kilometre long hiking trail to the summit cross

At the starting point of the hiking trail there is a large sign that prepares you for the upcoming path: 3.5 kilometers long is the hiking trail upwards. Another hint that one climbs the mountain at your own risk confirms once again that the ascent will not be easy. We had already read this on various pages on the Internet before, but we wanted to at least try it.

Since we were there before the official opening time, the large entrance gate was still closed. But to the left of the gate there is a narrow gapthrough which you can pass through without any problems. The regular opening hours are primarily for safety. Because as soon as the gate is opened, a book is also laid out, in which one registers with his name at the start of the hike and then carries out again when you come back. In this way, it is possible to understand who is on the mountain and who may not have returned and needs help.

Update (02/2020): We have read that this narrow gap at the entrance unfortunately no longer exists and therefore it is probably no longer possible to enter the premises before the official opening hours.

The easy part of the hike to the South West Viewpoint

Around 6.15 a.m. we started. Step by step through the forest. It was quickly noticed that the slope is increasing and the air is getting warmer. The first section is going relatively well and is still simple. Again and again we had beautiful views of the surroundings, the coast and the sunrise.

After about 45 minutes we arrived at a small rest ingenuity, where we took a short drinking break. We were still alone on the road, we only heard voices from afar from time to time and suspect that it was the people from the car that was already standing in the parking lot down in front of us. Before we went further, we read through the warning sign that stands at the small resting place. Here it was pointed out once again that it can be very dangerous from here on, as the slope increases strongly. We were aware of this, so it went straight on for us.

The difficult part of the hike to the summit cross

The next few meters led us on a very narrow path through many bushes until we arrived at an iron, green gate that was open. A few meters further on, however, the path quickly turned into a very stony path and became increasingly steeper. In the end we had to climb up some mountain walls almost vertically. Caution is required here, as there is often no firm support. By now a small group with a guide had overtaken us, but we didn’t mind.

We just kept going at our pace and then at some point we made it: we were at the summit cross!!! How cool 🙂 Incidentally, the summit cross is not the highest point of the mountain. In the past you could probably climb a little further to the right tip of Le Morne. However, as this is far too dangerous, it is no longer possible.

The panorama from up here is the purest madness! The sun already had a good warmth and glittered on the water, which showed itself in different shades of blue. A light wind blew around our nose. How incredibly beautiful. One had a very nice view of the reef edge and could see exactly where the famous “underwater waterfall” is located at the southern tip of the peninsula. Even if you can’t really see this one from here.

We certainly sat here for 30 minutes, took photos and just enjoyed the peace and quiet. In the end, we were even up here alone. A great moment.

After that we got ready for the descent, because unfortunately it was not so easy and brought us to our limits.

Even in the morning at 9 o’clock it is incredibly hot and the sun burns mercilessly. As a result, the granite stones heat up extremely. Since you have to climb a lot in the upper part and hold on well, this can also become unpleasant quite quickly and make the descent difficult. In addition, in the heat, the forces can eventually subside. You should always consider and be very careful where you go, as everything is very stony and steep. We have also met people who have not quite walked to the summit cross. And that’s not bad at all, because of course you already have insanely great viewpoints before!

After we had survived the most difficult part of the way back (a steep long rock face just in front of the green gate) and arrived again at the resting place, we realized that we had nothing left to drink. Luckily we met a very nice older couple from South Africa, who gave us some water, so that we could master the rest of the way without any problems.

On our way back, several people met us who still had the ascent ahead of them. In other words, these people did not start until around 10 a.m. or 11 a.m., which we think is far too late. The sun is already so intense at the time (almost 35 degrees here) that the hike becomes much more strenuous than in the early morning hours. After a 7 kilometer long hike and a few hours later we arrived again at the parking lot at the foot of the mountain and could not believe our luck. We had actually made it and were really proud of ourselves 🙂

The video of our hike

Here is a short video of our hike to the mountain Le Morne:

Our tips for hiking on the mountain Le Morne Brabant

So that you are well prepared for the hike, here are some helpful tips:

– Put on sturdy hiking boots! Sneakers or even sandals are absolutely not suitable for the ascent.
– You can easily make the ascent on your own! A guide is of course always recommended, also to learn about the island of Mauritius.
– Think of sunscreen! The sun is already very intense in the morning. We had up to 35 degrees in February.
– Drink a lot and take enough drinks with you! We only had 2.5 litres with us, which was far too little. It should be at least 2 litres per person.
– Starts early! Even if the gate doesn’t open until 7 a.m., you can start the ascent earlier. All the later, the heat becomes more unbearable.
– Watch out for the weather! If it rained in the morning or could it still rain during your hike, we would not recommend the ascent!
– Photographed a lot! The views on the ascent and on the summit are unique and should definitely be captured with the camera.
– Take snacks with you! We had bought small bananas in the supermarket the day before, which were great to get a little energy boost in between.

All in all, we can say that a hike to the mountain Le Morne Brabant is definitely worthwhile. It’s exhausting, but you get a magnificent view over the Peninsula Le Morne, the south coast of Mauritius and the turquoise shimmering ocean with its offshore coral reefs 🙂