Today we have visited two of the most famous sights of Mauritius: the Seven Colored Earth and the Chamarel Waterfall. Both are easily accessible by car, taxi or various tour operators.

From our Hotel Dinarobin Beachcomber Golf Resort & Spa, located on the Le Morne peninsula, we drove from the B9 road in Case Noyale to the b104 road towards Chamarel. Here we go up the mountain in many serpentines. Just before reaching the village of Chamarel, on the right side of Chamarel View Point, there is a small observation deck from which you have a magnificent view over the south-western coast of Mauritius.

Parking is very difficult here, as there are no parking spaces. That’s why, like all other cars and buses, we parked directly down the road down the street, turned on the warning flasher and took some photos from the viewing platform. The view is really nice and it is definitely worth stopping here for a short 🙂

From the road B104 in Chamarel you can already see a sign showing you the way to the entrance to the Seven Coloured Earth Geopark. At the entrance of the Geopark there is a small cash register where you can buy your ticket. Depending on what you want to see in the Geopark, the entrance fees are different. Since we only wanted to see the Seven Colored Earth and the Chamarel Waterfalls, we paid 250 rupees per person (about 7 euros). After the cash register begins a road that runs through the geopark. At the edge there are always signposts with distances to the individual sights. 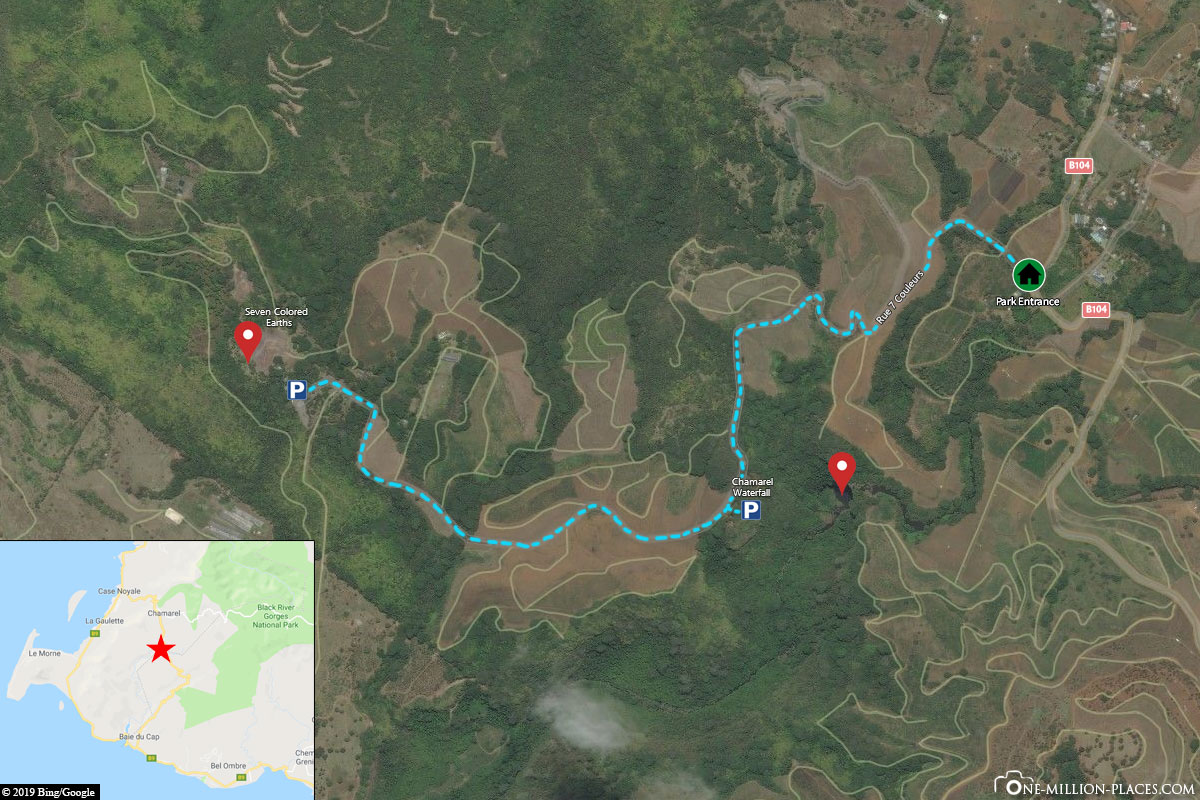 The first to get to the viewpoint for the Chamarel waterfall, which, like the village of the same name, is named after the French officer Charles Antoine de Chazal de Chamarel, who once lived in this part of the island. From the parking lot you have the possibility to see the waterfall from two different viewing platforms. The first is on the same level as the parking lot and a second platform is located on the right side of the parking lot and can be reached by stairs. From the upper platform you have a slightly more beautiful view of the Chamarel waterfall, which with a height of about 100 meters is the highest single-level waterfall in Mauritius. It is fed by three different streams that flow into the Saint Denis River. The waterfall overlooks the rocky outcrop of a basalt cliff and plunges over a rocky edge into the depths before flowing down a 6 km long canyon to the Baie du Cap.

Even if you can only see the waterfall from a far distance, we were really impressed by the falling water masses of this twin waterfall. We would have liked to have had our drone go up here, but unfortunately there was a warning sign that it was not allowed to use drones here.

There is also a hiking trail that leads to the foot of the waterfall. For the hike you have to take about 3 hours, but in return you will certainly be welcomed with a great backdrop.

From the waterfall we drove about 5 minutes further the road to the natural phenomenon Seven Colored Earth. Also here there is a parking lot, which was unfortunately very crowded when we arrived by car. It was afternoon and accordingly there were many of the tourist taxis known in Mauritius, but also smaller coaches. But we only had to wait a short time and then found a gap. From the parking lot you walk past a cash register, where you have to show your entrance ticket again. There is also a large sign indicating that drones are also prohibitedhere on the site. This is understandable, of course, because you want to protect the area with crashing drones, but still a pity, because we had our drone in our luggage and would have liked to take some pictures from a bird’s eye view. As you continue along the way, you will automatically arrive at the café, where there is an observation deck. From here we had a beautiful panoramic view of the seven-coloured earth, which is located in the middle of a lush green forest and unfolded like a rainbow-coloured sand dune in front of us.

Red, Brown, Purple, Green, Blue, Purple and Yellow. These are the seven colours of the sight of the same name in Chamarel.

But why does the earth have these colors here? The earth owes its colours to a geological peculiarity. The colours are the result of the conversion of basalt lava into clay minerals. Due to wind and weather, all water-soluble components have been washed out, leaving only the reddish-black iron oxide and the bluish-violet-green-blue aluminium oxide. Since these two components can also mix, the seven different colors are arranged in different layers. With the name “Seven Colored Earth” one might think that this is an earth or sand, but in fact the seven-colored earth is a lava rock.

Around the hilly terrain there is a path from which you can observe this natural phenomenon. On the other hand, it is forbidden to enter the hills, as one wants to avoid wear and tear and mixing of the individual colors. On the opposite side of the café there is another viewing platform from which you can look at the colored earth from a different perspective. As a rule, the colors of the earth come out especially well after it has rained and when the sun shines again. Otherwise, the sunlight in the morning or in the late afternoon offers a good prerequisite for beautiful photos. We were here in the afternoon so we saw the Seven-colored Earth in a good light.

Even if this place is of course a bit touristy, we really liked the seven-colored earth and also impressed a bit. This may also be because we have never seen anything like it anywhere else. So often there are no such areas with colorful earths or rocks in the world, but nevertheless such a phenomenon is still found in Peru (Rainbow Mountain), Argentina (Cerro de los Siete Colores, Purmamarca) or in China (Zhangye-Danxia-Geopark). We put the places directly on our bucket list 😉

The small enclosure for the giant tortoises

On the site of the Seven-colored Earth there is also a fenced enclosure, in which there are several Aldabra giant tortoises, which originate from the Seychelles and are the second largest turtle species in the world. These animals can grow up to 150 years old, reach a body length of up to 1 meter and achieve a body weight of up to 250 kilograms. The oldest giant tortoise of the park is believed to have died at the age of 250. Madness!

In total, it took us about 2.5 hours for the Viewpoint, the Waterfall and the Seven-Colored Earth and find that it is a sight in Mauritius that should not be missed 🙂