After visiting the Seven Colored Earth and the Chamaral Waterfall the day before, our little road trip in the southwest of the island went even further, because we wanted to visit the Black River Gorges National Park, the Grand Bassin and the well-known hairpin curve Macondé.

Our current route took us by car from our Hotel Dinarobin Beachcomber Golf Resort & Spa from the Le Morne Peninsula a bit along the coast to the north to Case Noyale, then on the B104 to Chamarel. From here, the B103 (Plaine Champagne Road) winds up in many serpentines until you finally drive into the Black River Gorges National Park. From there we continued to the Grand Bassin and from there back on the B102 to the south. The last stretch we drove along the south coast of Mauritius along the B9 to Le Morne. Overall a beautiful circuit of just over 70 kilometers. 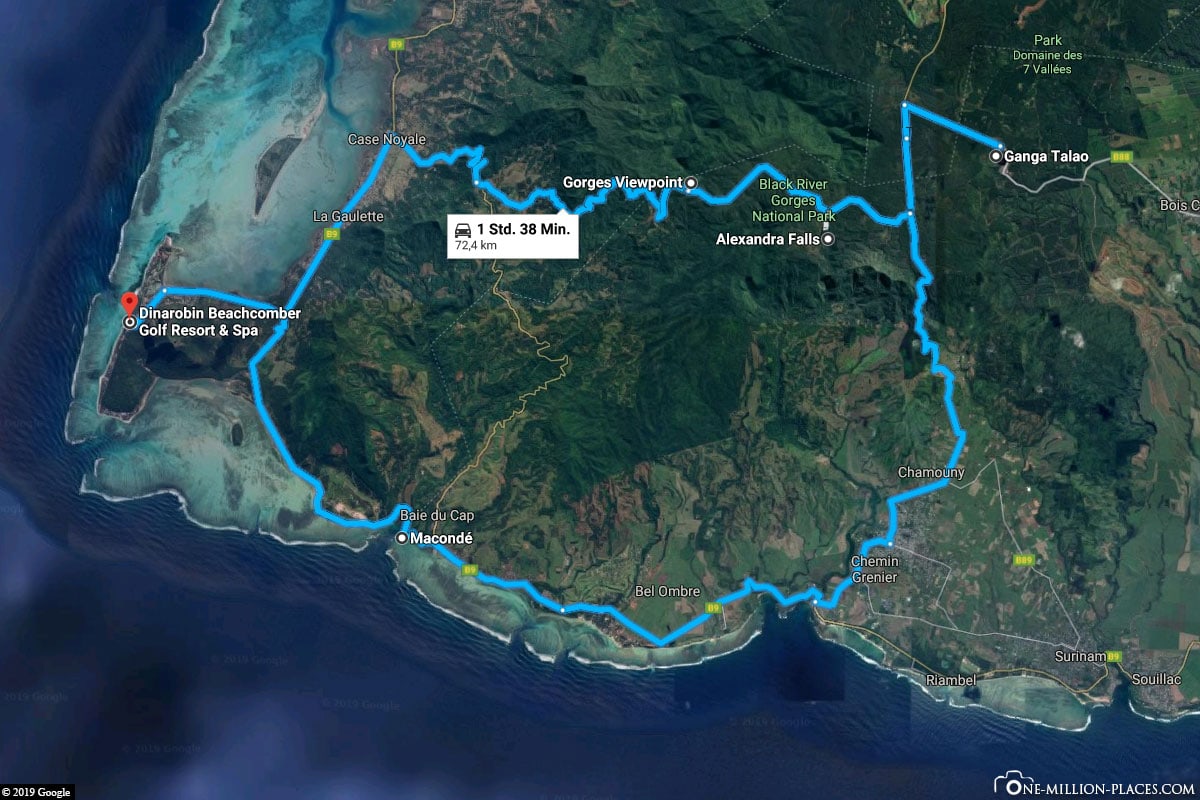 Our round trip through the south of Mauritius

We noticed that Mauritius is a very green island on the way from the airport to the hotel. On the island you will find a very lush vegetation, which is really juicy-green. This is not entirely surprising, as it often rains here, albeit only briefly.

The National Park’s worth of things to know

The national park is named after the river “Riviére Noire” (German: Black River), which rises in the park and flows into the Indian Ocean in the village of Grand Riviére Noire. Due to the large number of endemic flora and fauna, the park has been declared a national park since 1994. It is also on the list of proposals for inclusion on the UNESCO World Heritage List. More than half of the 311 endemic plant species and endemic birds of Mauritius are present in the park. These include, for example, the Mauritius falcon, the rose dove, the Mauritius parakeet, the Mauritius caterpillar catcher, the Mauritius spectacle-bird and many others.

The best way to explore the national park is through the 60-kilometre-long network of hiking trails that winds through the park. There are different routes with different levels, so there is a suitable route for everyone. Admission to the National Park is free. 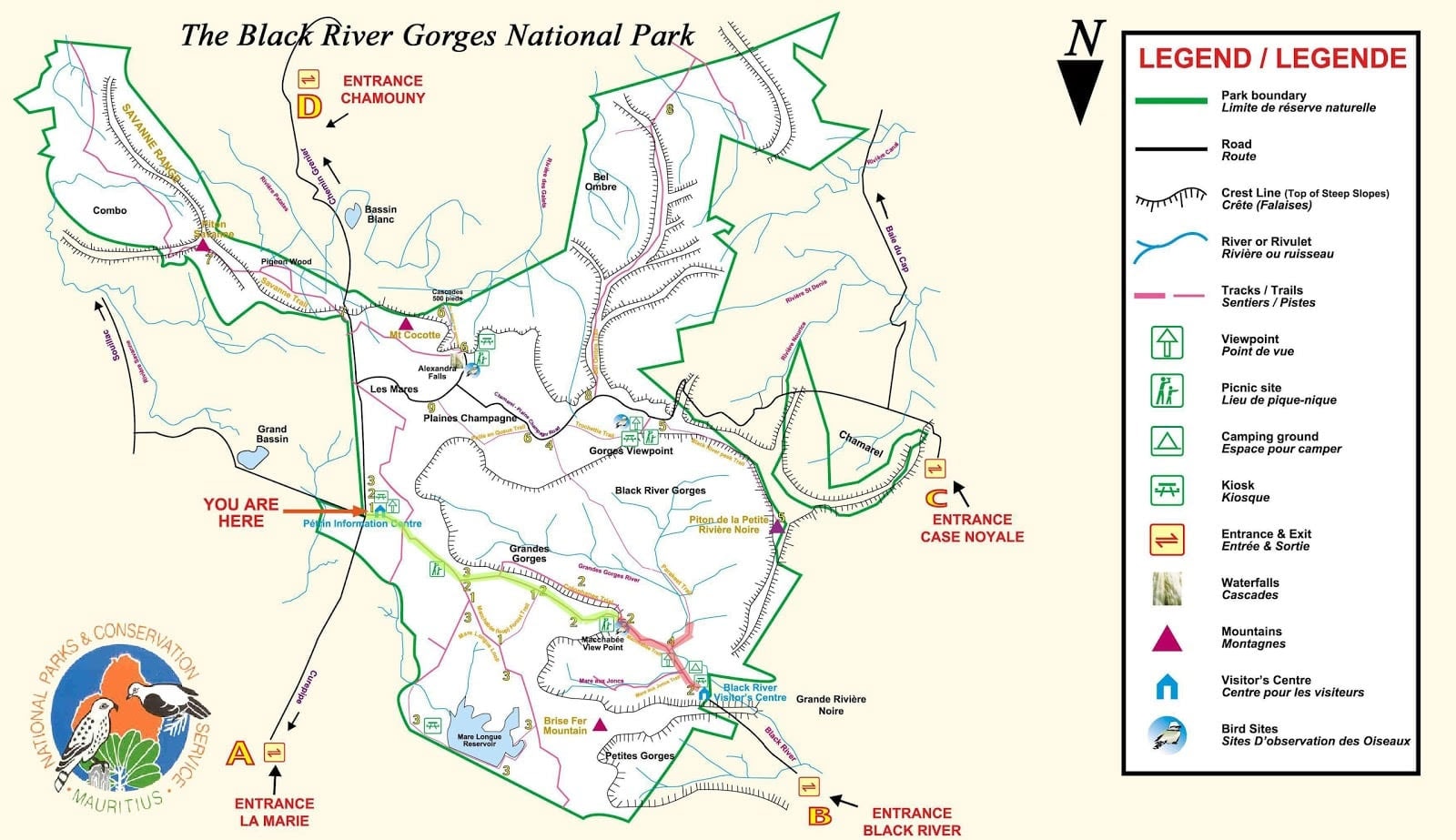 There are some parking options directly on the street. From here you pass a number of souvenir stalls, where locals sell local products but of course also plenty of plunder. A few meters further on is the lookout point. From here we had a super beautiful view to the coast, to the wooded valley, but also to the surrounding mountains, such as the Piton de la Rivice Noire. On the right, a waterfall can be seen from the viewpoint, which plunges into the depths.

While we took our photos on the observation deck and enjoyed the spectacular view, we were absolutely terrified when suddenly a macaque monkey sat in front of us, which had sneaked in very quietly. Suddenly the beautiful view was a total side issue and we paid our full attention to the monkey, who posed for a few photos in front of the great backdrop. You might think that he does this here more often 😉 A few minutes later, two other monkeys arrived, but they were gone as quickly as they were. What an experience. 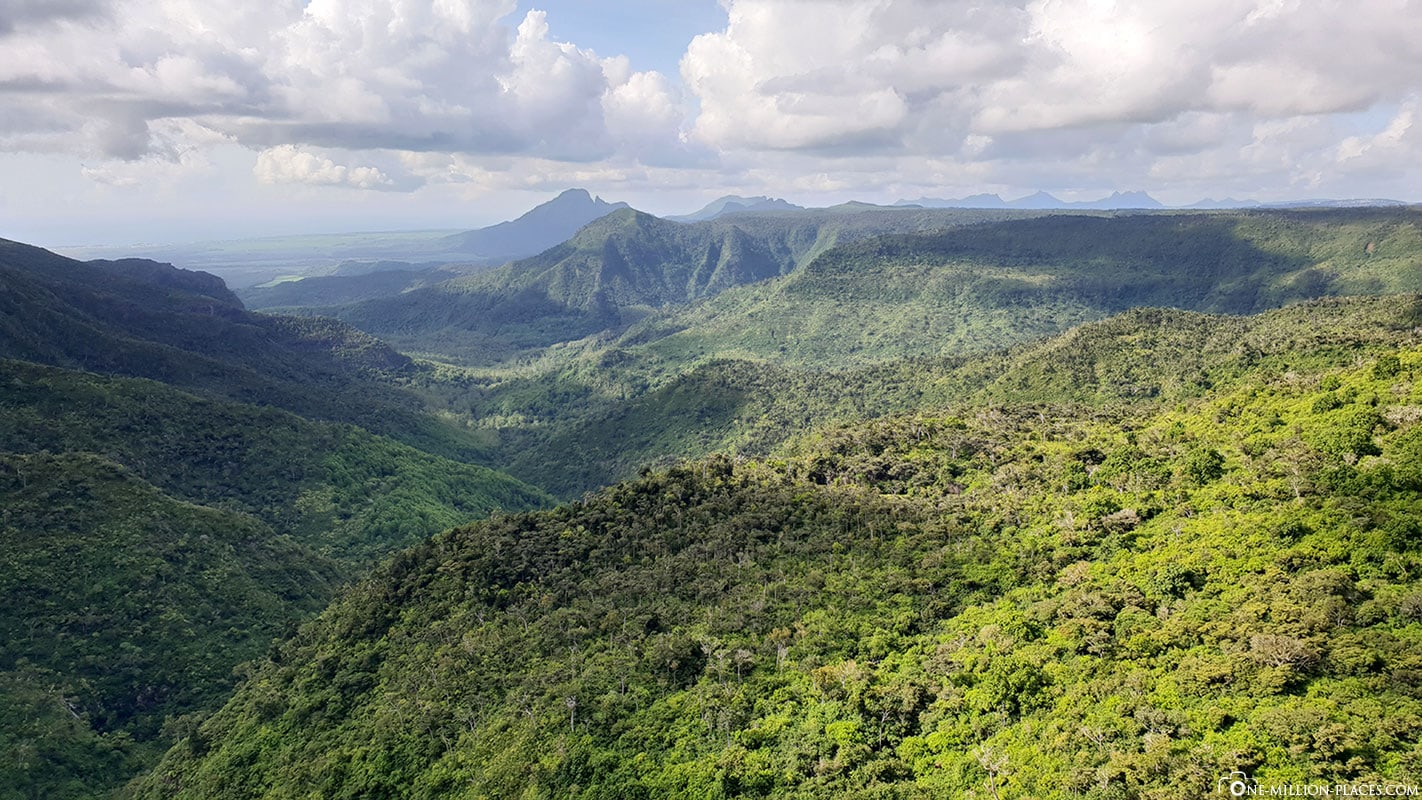 View of the National Park from Gorges View Point

Alexandra Falls is only about 5 minutes from theviewpoint. There are also plenty of parking spaces and also some stalls, but there were no more dealers here. In total, only two other cars were here. After a short walk you will reach a viewpoint from which you can take a mini view of the waterfall. But a lot has not actually been seen here, so we then quickly moved on again. 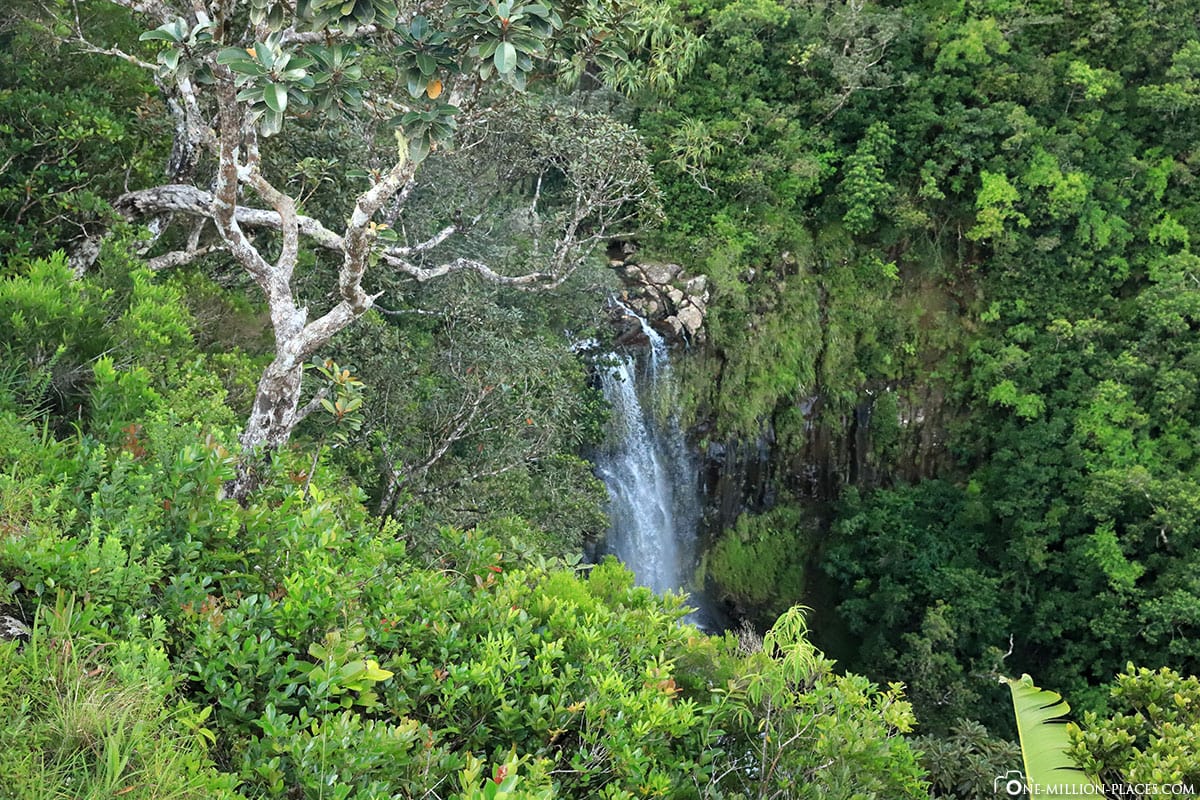 From Alexandra Falls, you can reach Ganga Talao (also called Grand Bassin) within about 7 minutes by car, where the most sacred Hindu pilgrimage site in Mauritius is located at an altitude of 550 meters above sea level. According to legend, the lake is said to be connected to the sacred river Ganges in India.

Hinduism is the most widespread religion in Mauritius. About 48 of the population belong to this religion. The second largest religion on the island is Christianity (33), followed by the Muslims (17), the Baha’i (1) and the Buddhists (1). The majority of Hindus and Muslims are descended from the Indian workers who were brought to the island by the British earlier to work on the sugar cane plantations.

When you drive into the village, there is a huge statue of the godsright on both sides of the street. On the right you can admire a 33 meter high statue of the god Shiva and on the left a statue of the goddess Durga Maa Bhavani, also 33 meters high. We then drove a bit through the village and parked in a parking lot on the edge of the Grand Bassin. On foot we walked down to the lake. On the shores of the crater lake are some statues of Hindu gods as well as smaller temples. We have seen many families who have made plates of offerings here. But at the same time there were again many monkeys on the way, who had emptied the plates with the offerings so quickly that one could hardly react. They sat quite comfortably a few meters away and tasted the fruit they had just stolen.

The lake is said to have a depth of 18 meters and provides a habitat for fish and eels. Fishing is forbidden here, however, due to the religious significance of the place.

During Maha Shivaratri, a festival that celebrates the god Shiva, tens of thousands of Hindus make barefoot pilgrimage across the island to this sacred lake. The festival must have taken place shortly after our visit here, as many tents and pavilions have already been erected around the lake. During the festival, which usually takes place in February/March, about 450,000 people make a pilgrimage to the Grand Bassin.

The hairpin curve Macondé at the Baie du Cap

From the Grand Bassin we continued on the b102 road southwards until we were back on the coast. From here we always went along the water back to our Hotel Dinarobin on the Le Morne peninsula.

We made a short stopover at probably the most spectacular curve of the whole of Mauritius: a hairpin bend called Macondé. We were even lucky and were the only ones, so we had time to take photos and look at the crystal clear water. Although you are right by the sea, today it was almost windless. This was a good opportunity to unpack our drone DJI Mavic 2 Pro to take some nice shots from the curve from the air. Also a very nice perspective, right?