A well-known attraction in Mauritius is the Botanical Garden in Pamplemousses, which we visited today. The garden is home to a wide variety of tropical plants, many of which are native.

The Botanical Garden in Pamplemousses

The Sir Seewoosagur Ramgoolam Botanical Garden is located about 8 kilometers north of the island’s capital Port Louis in Pamplemousses. The park is named after former Prime Minister and Governor-General Sir Seewoosagur Ramgoolam, who brought Mauritius to independence on 12 March 1968 after more than 150 years of British rule. In addition to the Botanical Garden, the international airport is named after him.

The Botanical Garden covers an area of 37 hectares and is the oldest botanical garden in the southern hemisphere. In 1736, the French governor Mahé de Labourdonnais decided to build his estate around the present main gate and to grow the first spices here. Many years later, in 1767, the French director Pierre Poivre introduced vegetables, fruits, flowers and spices from all over the world. With these exotic plants he designed the garden and laid it out as it can still be seen today. Five years later, he sold the park to the royal government and returned to France. The garden was further developed, many more plants and flowers were planted. Today, more than 600 different plant species are found here, including 85 different palm species that have been brought here from different parts of the world.

The best way to reach the Botanical Garden is via the B18 and M2 roads. There is plenty of parking on the grounds of the garden, which is free of charge.

There are also – as almost everywhere in Mauritius – two different entrance fees: a cheaper entrance fee for locals (25 rupees; about 0.70 euros) and the more expensive fare for tourists (200 rupee; about 5 euros). On Sundays and public holidays, admission is even free, but only for locals. 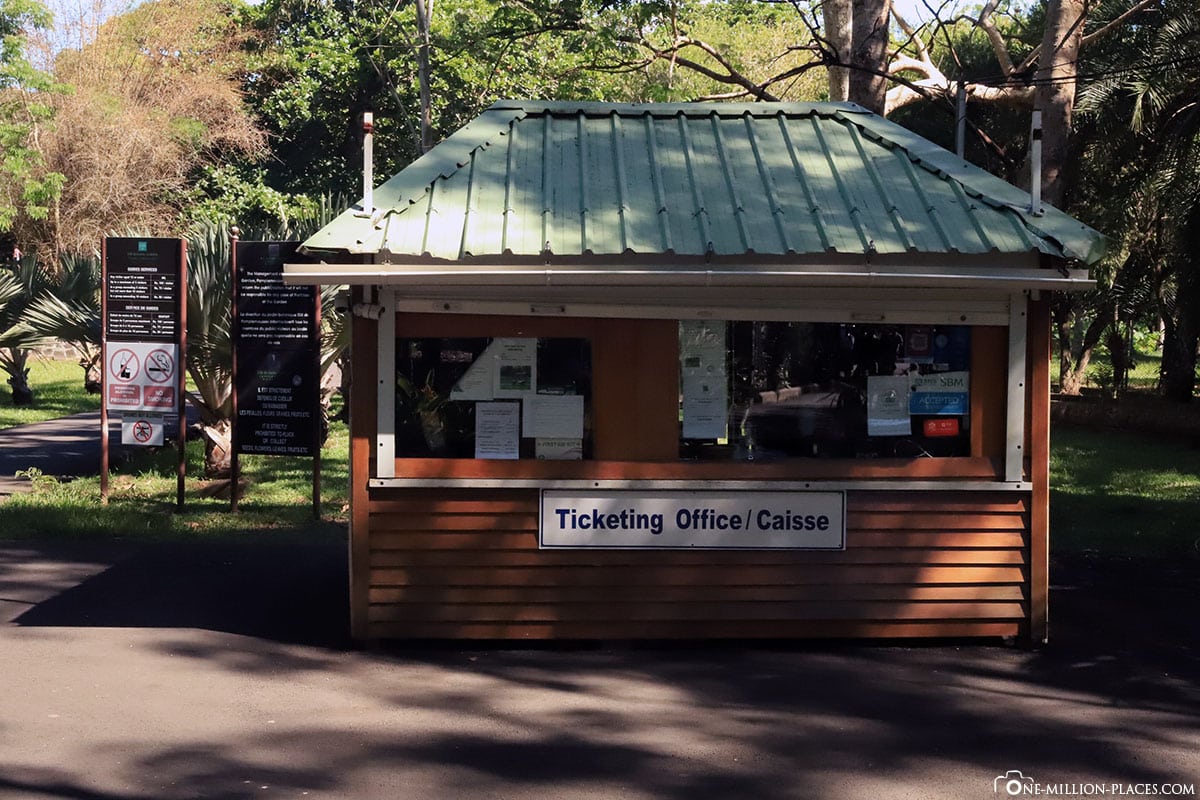 The entrance to the Botanical Garden

Guided tours with a guide

At the entrance of the Botanical Garden there are some tourist guides who offer guided tours of the park for little money and show one of the most important spots. But since we wanted to go through the garden at our pace and there was also an overview map at the checkout, we did not take a guide.

Here you can see an overview map of the park. At first glance, it looks very large and expansive, but is still very easy to explore on foot.

A map of the Botanical Garden in Mauritius

Highlights in the Botanical Garden

Right at the beginning of the park there is an enclosure for giant tortoises and deer. Since it was very hot, almost all the turtles lay under their dwelling, which protected them from the sun. The deer have also been lying in the shade and rested. Overall, we didn’t like the enclosures because they were relatively loveless and not appealing.

Opposite the two animal enclosures is the Grand Bassin, which has three small islands. On the north and south sides there is a pavilion in which there are seating areas. 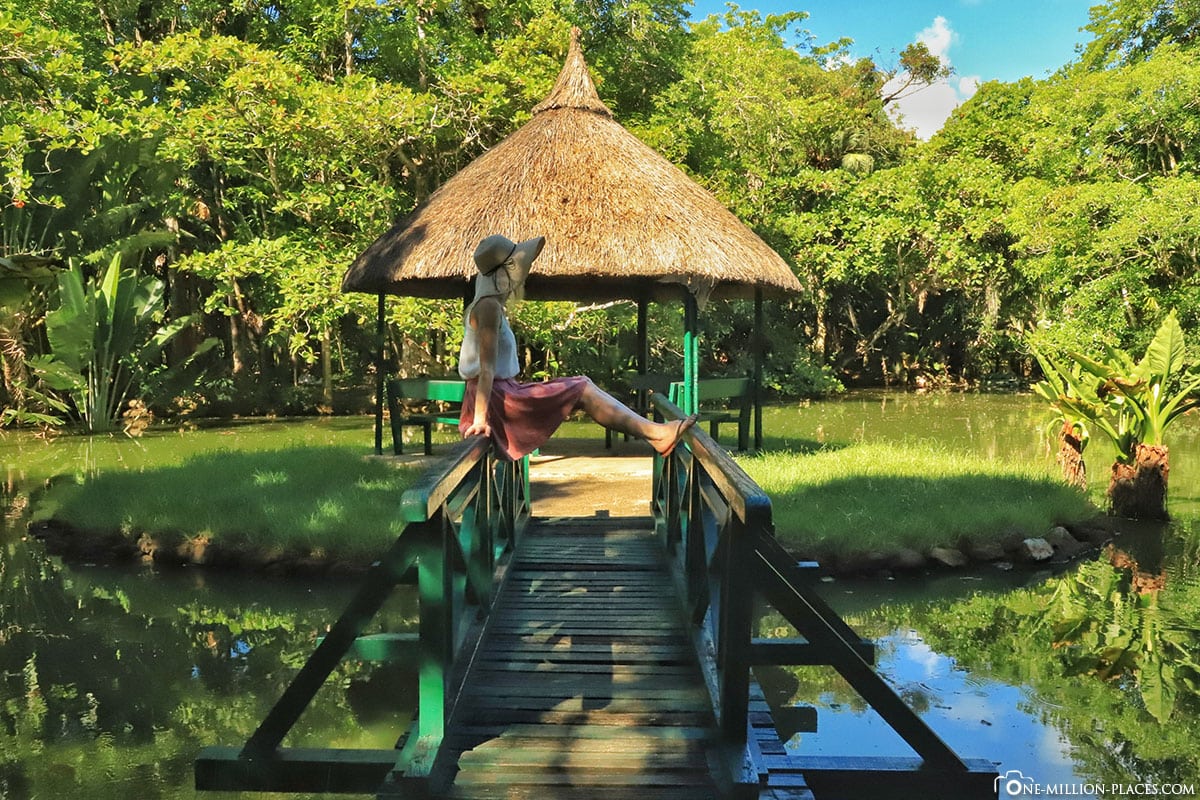 The Grand Bassin with the Pavilion

The highlight in the botanical garden is definitely the pond with the giant water lilies,which impressed us very much. At the end of the 1930s, this rectangular pond was created for the Amazon giant water lilies (Victoria amazonica).

The Amazon giant sea lily originates from the Amazon region in Guayana, Brazil and Bolivia. Their leaves can become very large and swim on the water surface. The flower of the giant water lilies only opens on two consecutive days: on the first day, the flower is white and attracts beetles. While the beetles sit in the flower and enjoy the sweet nectar, the flower closes. The next day, the color of the flower has changed from white to pink, it reopens and the beetle is released and can fly to a new, white flower. How fascinating such natural spectacles are again and again! 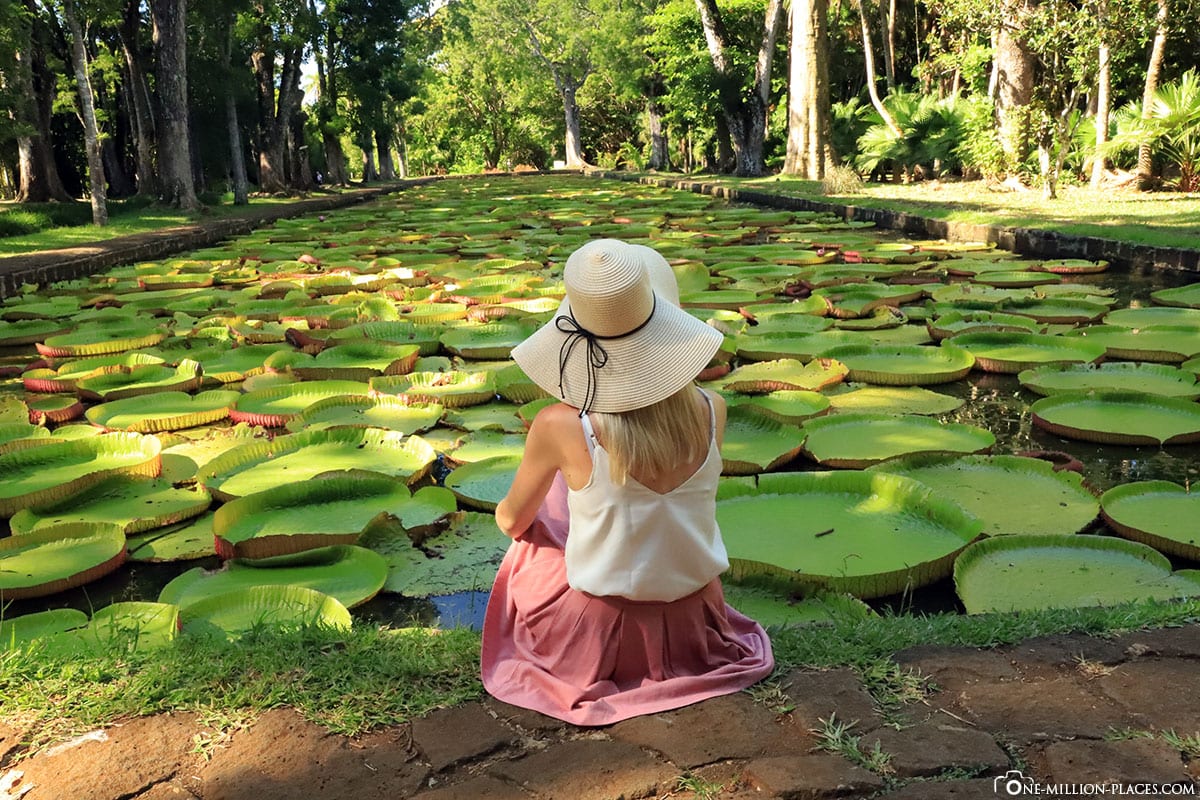 The large water lily pond in the Botanical Garden

In the immediate vicinity of the giant water lilies is the Lotus Pond, which houses the Indian Lotus Flower (Nelumbo nucifera). Half the lake is filled with countless long-stemmed lotus flowers, some of which have also bloomed. On one of the leaves we tried out the lotus effect with drinking water and filmed in slow motion with our mobile phone. Here you can really see the typical Abperl effect really perfectly. Very impressive!

Our last stop in the Botanical Garden was the Chateau Mon Plaisir. The two-storey colonial house was built in 1823 and is now a listed building. In its many years of use, it served as a residence for various people, e.g. the directors of the park. In 1995, the building was extensively renovated and converted into a museum.

More impressions of the Botanical Garden

Here are some more impressions of the Botanical Garden in Mauritius: