In preparation for the ITB in Berlin, we took a look at our Berlin pictures and found out that we have not yet written a post about the Spreepark, which we visited in October 2013. We would like to make up for this at this point 🙂

The history of the Spreepark in Berlin

Spreepark Berlin im Plänterwald was an amusement park in the Treptow-Köpenick district of Berlin. We took the S8 from the Ostkreuz in the direction of Gründau to the station Plänterwald and walked again about 15-20 minutes from here. If you have time, you can make a short detour to Treptower Park to the Soviet Memorial.

The Spreepark was opened in 1969 under the name Kulturpark Plänterwald in GDR times and reached visitor numbers of up to 1.7 million annually. After the reunification, the park was modernised and redesigned by the new tenant family Witte – a family of traditional showmen from Hamburg. Unfortunately, this did not bring the hoped-for boom. The number of visitors fell sharply from 1999 onwards – most recently only about 400,000 visitors came to the park each year. The Spreepark went bankrupt and the closure followed in 2002.

Since then, the site has been neglected.

A very interesting story is how things went with the Witte family of showmen: After the insolvency of their Spreepark, the family fled with six rides to Lima, Peru, in order to build a new amusement park there. Unfortunately, luck was not on their side; they went bust again. And so the family wanted to return to Germany in 2003 with some rides. Unfortunately, the family’s father, Norbert Witte, was hired as a drug courier, hid 167 kilograms of cocaine in a ride and was caught. The father is arrested immediately after his return in Berlin and is jailed for a total of 4.5 years. His son, Marcel Witte, on the other hand, ended up in a Peruvian prison for a total of 20 years.

In February 2014, the Land of Berlin acquired the inheritance law at Spreepark from the insolvent Spreepark GmbH. Two years later, Grün Berlin GmbH took over the abandoned park in the Plänterwald. The site is to be reopened at some point; Various plans are currently being made for this.

Tours through the Spreepark

Between 2009 and 2014, you could take guided tours of the Spreepark grounds – mostly on weekends. It has been the only way to visit the “remains” of this mystical, hidden place.

In October 2013 we had the opportunity to take part in a two-hour tour. We had organized tickets online; the price was 15 euros per person. The history of the park told us and the 50 or so other visitors the daughter of the former owner, Sabrina Witte. She left no detail and even the drug story came to the table. Her mother was still the tenant of the site at the time. Together with her, they offered regular tours and maintained a café and a snack cart to finance the repair of remedial rides. We were particularly fascinated by the contrast between the old, rusted, partly broken and rotten rides and the green, feral nature,which gradually reclaims everything. Simply great photo motifs!

On April 27, 2014, the last guided tour of the old Spreepark took place. After that, there were only guided tours outside the park. From time to time, the park was used as a backdrop for movies or music videos.

The Ferris wheel in the Plänterwald

The most striking landmark of the park is the 45-metre-high Ferris wheel,which is already visible from afar and towers high above the trees. Even in the best years of the amusement park, a former 40-metre high Ferris wheel was the main attraction. In 36 gondolas 216 people had space and could enjoy the view over Berlin from above. In 1989, on the occasion of the 40th anniversary of the GDR, a new Ferris wheel was erected, which replaced the old and towered over the height by 5 metres.

In 1995, the large white water course “Grand Canyon” was opened in the Spreepark. At the new attraction, visitors could rush from a 14 meter high hill into the depth. Today you can only see parts of the white water course. The yellow boats are at the entrance/exit point, the tracks are rusted and the roadway has become a single mossy tub.

In 1992, Spreepark bought the roller coaster from the bankrupt French theme park “Mirapolis”. After the railway was rebuilt in Berlin, visitors were able to race through the park in the roller coaster at a speed of 45 km/h. Today, many parts of the route are covered by trees and shrubs. One of the most beautiful photo motifs of the Spreeblitz is the Dragon Gate – a tunnel entrance through which the roller coaster has passed. 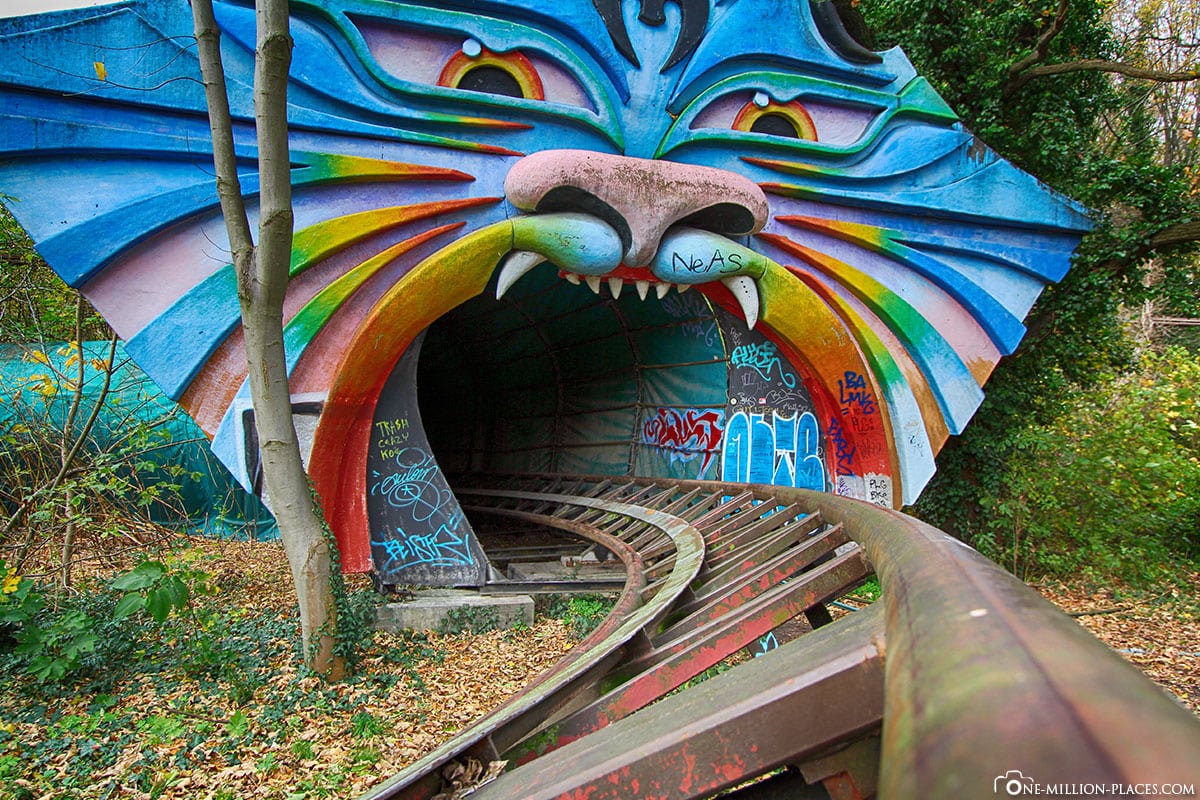 The Dragon’s Mouth at the Spreeblitz

Other attractions in the Spreepark

In the Spreepark there were countless attractions at that time – when the amusement park was still open. Only a few of them remain. The rest was sold or scrapped after the closure. Some other rides that we were able to visit in October 2013 were later burned down during a major fire in August 2014.

For example, we could still see parts of the “Chapeau Claque” hat railway, which was bought off from the insolvent French theme park “Mirapolis” and was integrated into the Spreepark in the late 1990s. We could see the old driver’s cab as well as some cars of the Hutbahn in the former railway station. In one canal we could discover some old, already overgrown swan boats. The Ride Swan Ride was opened in 1994 in spree park and visitors were able to drive through the countryside in swan boats. Over the then Monte Carlo Drive you could drive with gasoline-powered convertibles, which were replicas of American dream cars (e.g. Corvette). The ride passed lakes and gardens. In the past, dinoswere scattered all over the park, which had also emerged from the insolvency estate of the French theme park Mirapolis. We could also see two of the dinos during our tour; many have since been destroyed by vandalism.

Berlin has several Starbucks stores and also its own cup 🙂

The Starbucks City Cup of Berlin