Cologne was the end of our 7-day river cruise on the Main and Rhine with A-ROSA. In the morning at 9 o’clock we were taken by transfer bus from the ship to the main station. From here we made our way directly to our hotel, because we wanted to stay one more night in the city to see all the important sights such as the Cologne Cathedral or the Old Town within 36 hours.

Things to know about Cologne

The city on the Rhine is the fourth largest city in Germany with 1.1 million inhabitants. Cologne was founded in 38 BC and has more than 2,000 years of city history. Due to the important Cologne Cathedral, the Romanesque churches, medieval monuments and the reputation as a carnival stronghold, Cologne is an important and popular destination in Europe. In addition, the city has international significance as an economic and cultural metropolis, a university and media city, as well as a congress and trade fair location.

The pier for the river cruises of A-ROSA is at the Deutz port (link in Google Maps). It is about 30 minutes on foot to the old town. There is of course also a shuttle service from Cologne Central Station to the jetty. The harbour guide of Cologne is available here as a free .pdf version.

The 25hours Hotel Cologne The Circle

From Cologne Central Station we walked about 15 minutes to the 25hours Hotel The Circle, which is located in a quiet location in the Friesenviertel. The mere sight of the building has already amazed us. In the former circular building of the Gerling insurance company, there are 207 tastefully furnished rooms, a restaurant and a bar – true to the motto “playful retro style meets imaginative utopias of the future”. And this is exactly the motto we could also find on the ground floor, where the reception & lobby, a shop, an incredible number of seating options, a café and co-working spaces are located. The absolute highlight were the futuristic elevators,which are already a highly coveted Instagram spot 🙂

After we liked the ground floor so much, we were now looking forward to our room. We had a Large room on the 6th floor, which was equipped with an open bathroom with rain shower, a large comfortable king-size bed, a smart TV and a free minibar. The room was very individually furnished with different design elements and great attention to detail. An absolute feel-good room on 26 sqm with a view of the city. Of course, there was also very good and free Wi-Fi.

On the 7th floor is the wellness area of the 25hours Hotel The Circle, which is equipped with a sauna and a separate relaxation area. On the outdoor terrace you can relax on loungers in summer, in winter it offers a cooling down after the sauna session.

For us, a great, extensive breakfastis always part of a hotel stay. And you can get that at the 25hours Hotel The Circle in the NENI – the hotel’s own restaurant, which is located on the 8th floor with the best views of Cologne Cathedral. The morning breakfast buffet was very lovingly prepared and left no wishes unfulfilled. Happy and with a full stomach we were able to start our city walk through Cologne well strengthened afterwards.

From our hotel we explored the most important sights of Cologne on foot and were able to get a (first) impression of the city. There are cities we fall in love with at first sight. Unfortunately, Cologne is not one of them. We can’t quite describe why, but the city really didn’t like us during our walk and couldn’t convince us at all. Of course, there are beautiful corners, such as the cathedral and the fish market, but beyond that, the city unfortunately does not have much to offer in sights.

Cologne Cathedral – The landmark of the city

The Cologne Cathedral, whose official name is the Hohe Domkirche St. Peter, is THE landmark of Cologne and as a building an architectural masterpiece. Its construction time is record-breaking at 632 years and two months. The cathedral was inaugurated in 1880 and is still one of the largest cathedrals in gothic style. Miraculously, the cathedral survived the Second World War seemingly unscathed and was seen in the bombed-out city as a symbol of the will to live. Since 1996, the cathedral is listed as a UNESCO World Heritage Site and with about 6 million visitors annually is one of the most visited sights in Germany.

The historic old town was destroyed almost 90% during the Second World War and then rebuilt in years of micro-work. It includes the area around the former Benedictine Abbey of St. Martin, the Old Market and the Heumarkt. In the lively district, restaurants, breweries, shops and old houses line up in squares and small alleys. During our walk through the old town we were able to discover many monuments and fountains (e.B. the Heinzelmännchenbrunnen), churches, small squares and the tower of the historic town hall.

The colourful houses at the fish market

Our most beautiful photo motif of Cologne is the fish market, which is located in the historic old town. We really liked the colourful houses with the Romanesque church of Groß St. Martin in the background. After the narrow, pointed houses at the Fish Market and the well-known church were largely destroyed during the Second World War, they were rebuilt in the historical style. 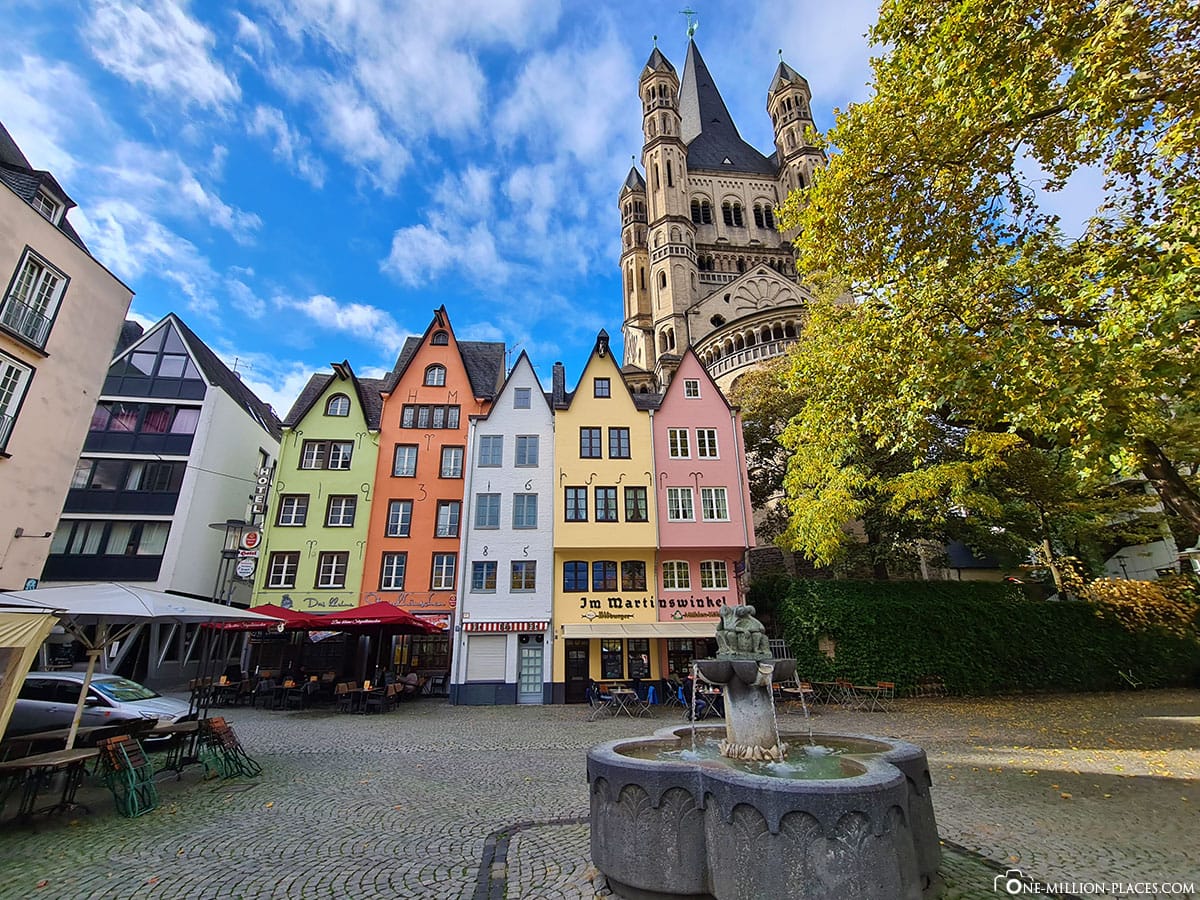 The colourful houses at the fish market and the Cat. Church Groß St. Martin

The Hohenzollern Bridge & the Rhine Promenade

The Hohenzollern Bridge is a pure drawbridge and probably the most famous bridge in Cologne. With its neighbouring main station, it forms one of the most important junctions in the German and European railway network and, as a building, is part of the cityscape of Cologne as well as the cathedral. The bridge is owned by Deutsche Bahn and is one of the busiest railway bridges in Germany with more than 1,200 train journeys per day. We crossed the bridge on foot and passed the thousands of colorful padlocks that in love couples labeled with name and date and attached to the railing of the bridge to swear eternal love. Traditionally, the key is thrown into the Rhine together. On the other side of the Rhine there is a beautiful Rhine promenade with seating, from which you have a very nice view of the Rhine, the Hohenzollern Bridge and the cathedral.

The Chocolate Museum – The Cultural History of Chocolate

Since it had rained heavily in the afternoon, we wanted to visit another museum. And since we are total chocolate fans, the decision was quickly made to visit the Chocolate Museum, which is located in the Rheinauhafen. Buying a ticket was an experience, because you’ve already got a few Lindt Napolitains here. Delicious! Since 2006, the Chocolate Museum has been working with the Swiss chocolate manufacturer Lindt & Sprüngli in the area of the production exhibition, so the chocolate that can be tasted in the museum is from Lindt. With a museum guide in hand, our tour could start. Within 15 stations, visitors will be taught the history of chocolate; by the way, you will learn interesting facts and see exciting statistics. Our highlight in the museum was the glass chocolate factory, which shows the way from the cocoa bean to the packed chocolate bar. The scaled-down mini-plant processes around 400 kg of chocolate every day. The absolute icing on the cake in the museum is the chocolate fountain, through which 200 litres of liquid-warm Lindt chocolate flow and where you can normally snack … but unfortunately not in Corona times 🙁 What a pity!