Googling the most beautiful historical and medieval cities in Germany, Then Rothenburg is at the top of the Tauber! Because of this, a visit to the small town of Central Franconia has always appealed to us. Even though Rothenburg is only about 2 hours drive away from us, we never really managed to visit the beautiful city. So far 😉

Rothenburg ob der Tauber is a small town in Bavaria with about 11,000 inhabitants, which is known – even beyond the borders of Germany – for its largely preserved medieval old town. The historic core of the city is surrounded by a walk-in city wall.

Since 1950, Rothenburg has been one of the highlights of the Romantic Road, the German holiday route that is now internationally known. The road stretches over 29 villages and 460 km – starting on the Main in Würzburg over the west of Franconia to Bayerisch-Schwaben, through a piece of Upper Bavarian territory to the Ostallgäu to Füssen. In addition, Rothenburg is located on Burgenstraße, a 770 km long route with more than 60 castles and castles between Mannheim and Bayreuth.

In a bombing raid shortly before the end of the Second World War, about 45% of the city was destroyed. Originally, the attack was directed at an oil depot nearby, but it could not be attacked due to fog. Rothenburg was the surrogate target, although it had no military significance. However, the destruction mainly affected the newer eastern part of the old town, so that the most important monuments were fortunately preserved. The destroyed buildings were faithfully rebuilt or restored after the war and very simply – which is why the cityscape still looks very original today. The outlines of the old town are best viewed in Google Earth.

Rothenburg ob der Tauber in Google Earth & as a map

Our hotel in Rothenburg

For two nights we stayed at the Hotel Rappen, which is located directly at the Galgentor and thus in close proximity to the historic old town, which can be reached in a few minutes on foot. Free parking is available in sufficient numbers directly behind the building. At the check-in we were warmly welcomed and familiarized with the most important rules of conduct regarding Corona. These include, for example, the wearing of a mouth-nose protection in public areas as well as various breakfast times, for which one has to commit in advance. All these measures are perfectly understandable and correct in the present time.

Our room was located on the top floor and was a deluxe double room,one of the best categories. The room was very spacious with a separate sofa and armchairs, as well as a desk. It was particularly nice that a baby cot was already available next to the double bed – very attentive. We immediately felt very comfortable in the room: modern and bright furnishings, very clean and not at all audible.

Breakfast was served in a restaurant near the reception. At the buffet you can basically use yourself – but only if you have put on one-time gloves beforehand. Sausage and cheese slices were already draped on plates covered in cling film. Everything else could be taken off the buffet as usual. The selection was very good: various pastries (bread, rolls, croissants), spreads, & hot dishes, juices etc. The perfect offer to be strengthened for the subsequent city walk 😊

From our hotel we were able to explore the sights of Rothenburg wonderfully on foot and on our own, because the old town itself is very compact and the most important buildings are not far from each other. A good map with all the sights of the city can be downloaded here.

The old town of Rothenburg is surrounded by a city wall of about four kilometres and is one of the most impressive buildings of the medieval city. The fortification is almost completely preserved and corresponds to the defence systems of the 17th century in its present-day expansion. Many citizens and friends of the city have already worked to preserve the unique city walls of Rothenburg. This can be seen in the countless donor stones attached to the city wall with the names of the donors. Such a donation stone is available from a donation of 1,200 EUR.

The most beautiful motif along the city wall and at the same time one of the most famous sights of Rothenburg is the Gerlachschmiede, a funnel-shaped half-timbered house with a curved roof and weather vane at the top of the roof. The Gerlachschmiede and the Röderturm behind it are best photographed from the tower path. 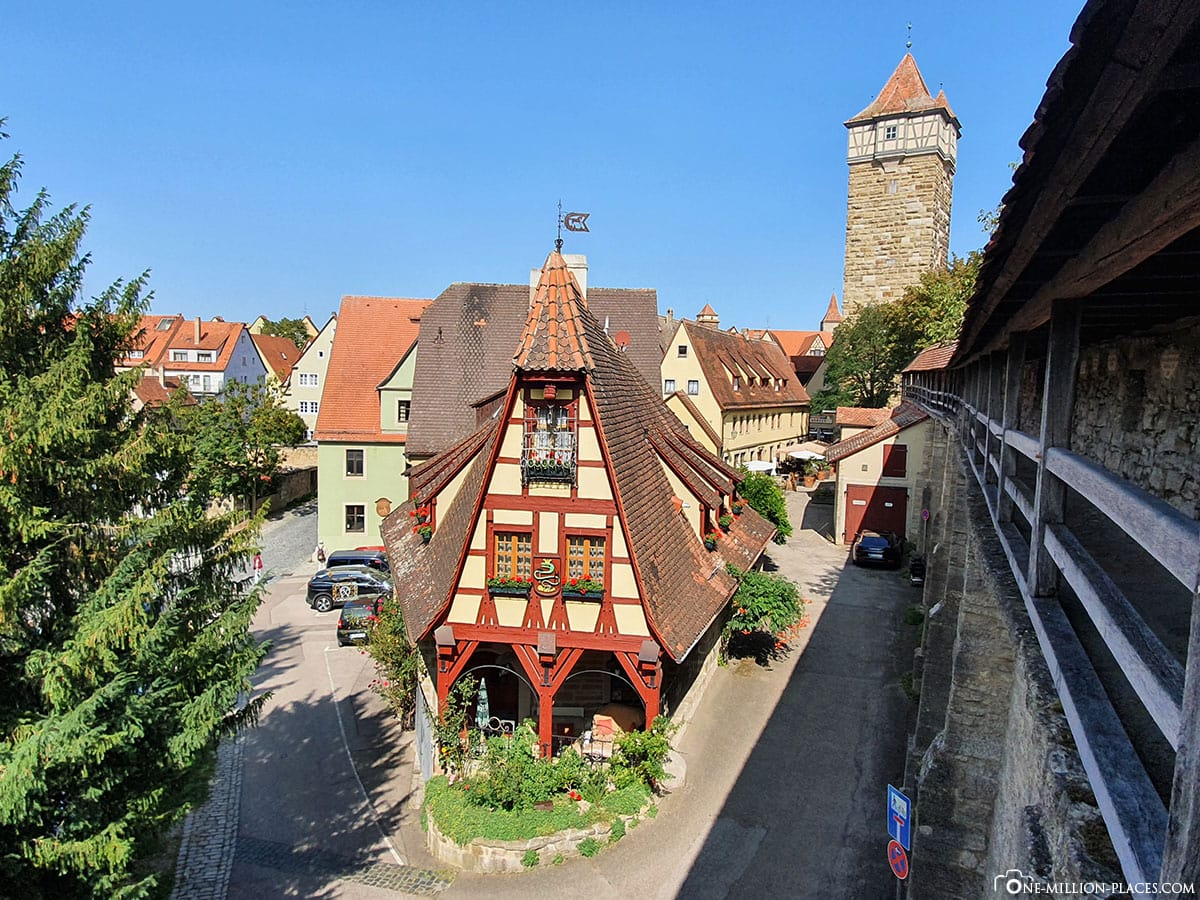 The Gerlachforge on the city wall

The old town of Rothenburg is accessed through six different city gates. We walked over the galgen gate in the northeast into the old town, as our hotel was right in front of this gate. Other gates are the Rödertor (east), Spitaltor (south), Kobolzellertor (Taubertal), Burgtor (west) and klingentor in the north of the city.

The construction of the first “small” city wall began when Rothenburg ob der Tauber was granted town rights in 1172. The cornerstones of this old city wall are e.g. the White Tower and the St. Mark’s Tower with the Röderbogen. The present visible city wall was only built in the 14th century (1350 to 1410).

A walk along the Tower Trail

Our tip: At the tourist information office at the market square there is a brochure “Turmweg Rothenburg”, in which the entire path and the sights are described in detail.

During the walk along the Tower Trail you always have great views of the old town and the fortifications. 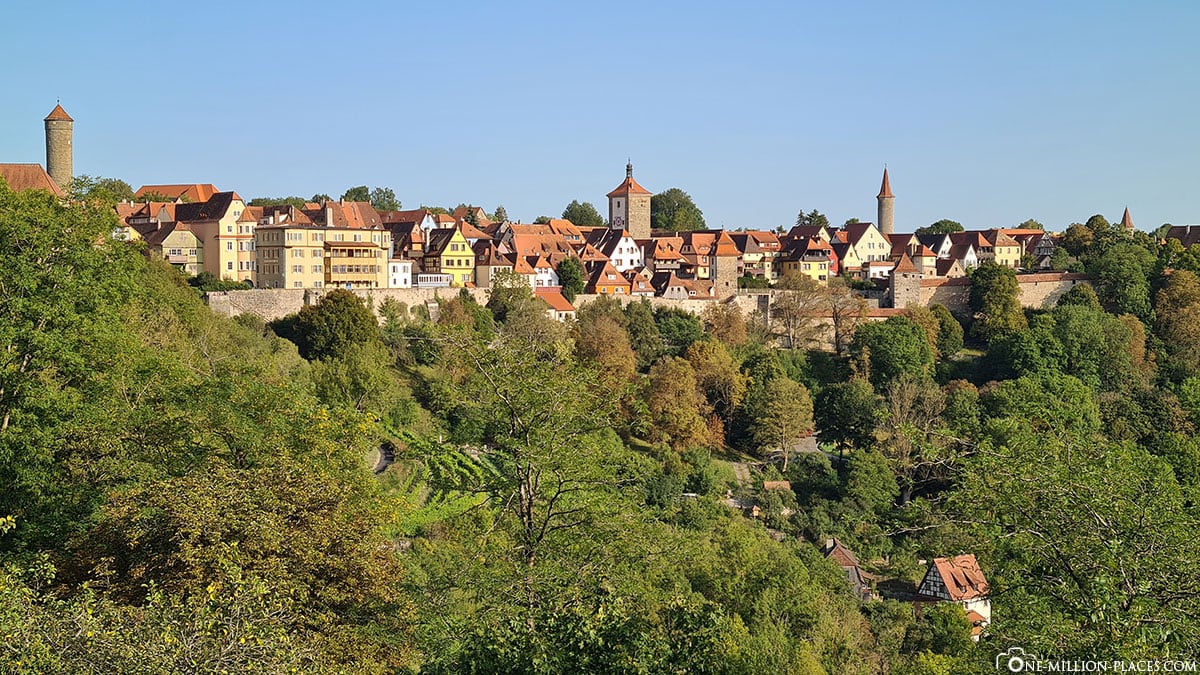 View from the castle garden to Rothenburg ob der Tauber

Centrally located in the old town of Rothenburg is the market square, which we reached from our hotel in a few minutes. Around the square are some of the most important buildings in the city. These include the town hall with its 60-metre-high town hall tower, the Ratstrinkstube, which now houses the tourist information office, and the history vault. In addition, there are very nice cafés and restaurants.

On the edge of the square is the meat and dance house, a very nice patrician house with half-timbered gables. The name comes from the fact that festivals were once celebrated here on the upper floor, while the butcher on the ground floor sold his wares. In front of the Meat and Dance House stands the Georgsbrunnen from 1608. With a depth of 8 meters and a capacity of 100,000 liters, it is the largest well in the city.

The alleys of the medieval old town

A stroll through the old town of Rothenburg is very worthwhile, because you will find countless winding streets with cobblestones, picturesque half-timbered houses and romantic cafés. Every corner has a new great photo motif, so we took countless photos. The Church of St. James takes its name from the location of Rothenburg on the Way of St. James to Santiago de Compostela. More than 1,000 pilgrims arrive at the Jakobskirche in Rothenburg every year. In addition, it trumps with an architectural peculiarity: under the west gate of the church, a street leads through.

Also worth mentioning is the Alt-Rothenburg Craftsman’s House from 1270, one of the oldest, original houses in Rothenburg. Today there is a museum in the building, which shows the life of a family of craftsmen in the Middle Ages in the original furnished rooms.

Probably the most famous attraction in Rothenburg is the Plönlein. We were here several times to take beautiful photos – including at 8 o’clock in the morning, where we actually had the photo motif for ourselves. This beautiful scenery is certainly one of the most famous postcard motifs in Germany 😊

The word “Plönlein” means
“Little Square at the Fountain”
. In addition to the yellow, crooked half-timbered house, the Plönlein also includes the fountain in front of it and the two towers of the old city wall – on the left is the Siebersturm, which leads to the hospital district, on the right the tower of the Kobolzeller Tor, which points the way into the Taubertal valley. 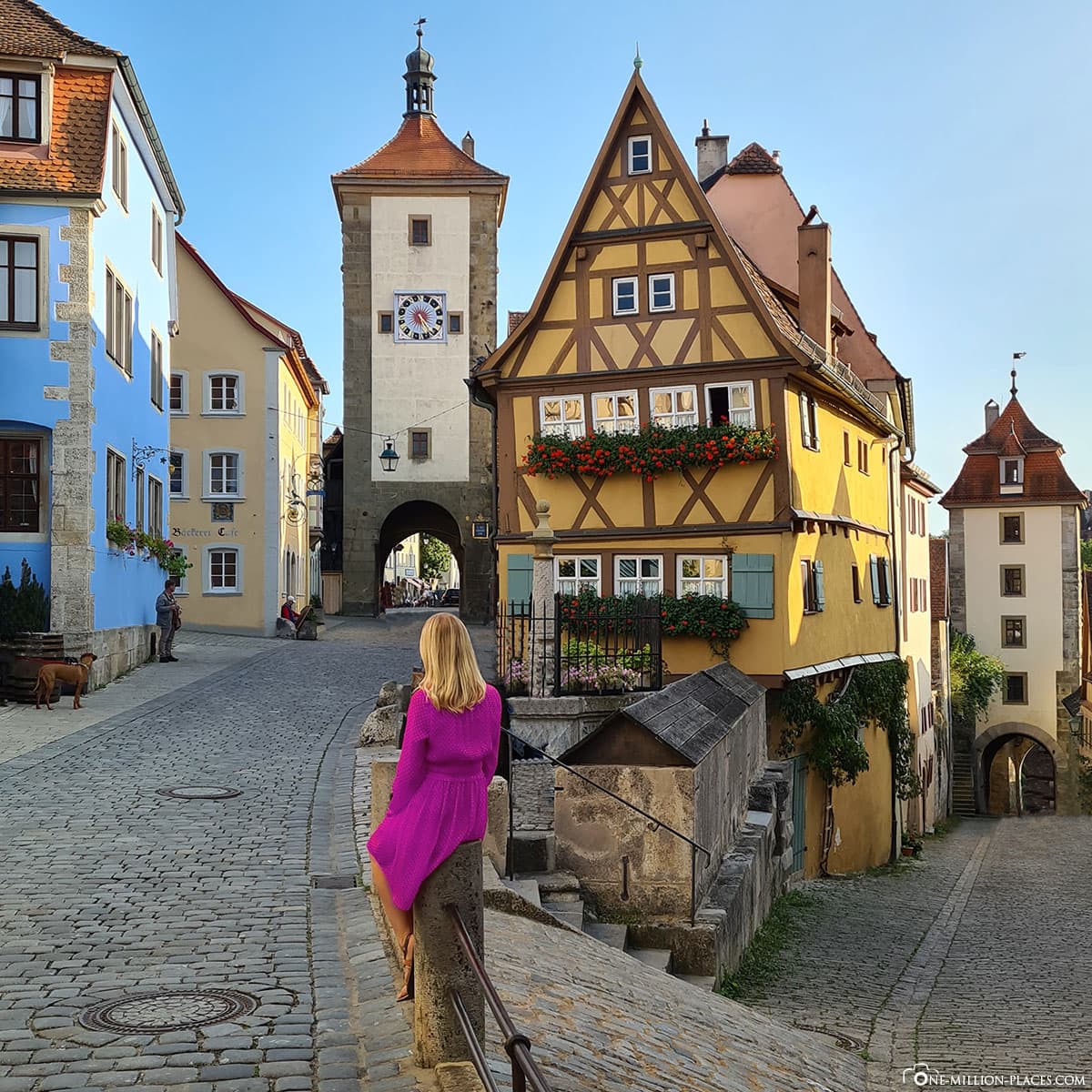 The Plönlein – The landmark of Rothenburg ob der Tauber

Through the coat-of-arms-decorated castle gate you reach the castle garden, from which you have a fantastic view of the old town of Rothenburg and the Tauber valley. In 1142, the Hohenstaufen built an imperial castle on the site of the present-day castle garden, which was destroyed by an earthquake in 1356. Today, the park is an oasis of tranquillity in the city. Particularly worth seeing is a small garden from the 17th/18th. Century. with eight sandstone figures representing the four seasons and the four elements.

A visit to “Käthe Wohlfahrt” shows why Rothenburg is also considered the Christmas capital of Germany. There is a Christmas village, a Christmas museum and a Christmas shop… all year round. In front of the Käthe Wohlfahrt shop in Herrgasse you are greeted by a giant nutcracker and a red history bus before entering the Christmas market. Already crazy to look at Christmas tree baubles and flybows at 30 degrees outside temperature 😉

Käthe Wohlfahrt is by the way the name of the founder. The origin of the company’s history at that time was a small toy box, which aroused the interest of a friendly American family. Later, the welfare companies set up their own products and sold them at weekly markets before founding their own company in 1964, where Christmas items are sold.

The Crime Museum in the old town of Rothenburg is a well-known museum of legal studies, which shows in its 3,000 m2 exhibition the legal development from the late Middle Ages to the 19th century. From the old town, a walk into the Taubervalley below Rothenburg is worthwhile. Here is the double bridge from the 14th century, which is reminiscent of a Roman viaduct. Also in the Tauber Valley is the Topplerschlösschen, which was built in 1388 as a residential building and defensive tower of the mayor Toppler. The building is now decorated with furniture from the 16th to the 19th century and can be visited for an entrance fee.

Snowballs – A specialty from Rothenburg

In Rothenburg all sweet cats definitely get their money’s worth, because here you can find the unbelievably delicious Rothenburg snowballs – a traditional, lard baked mürbe pastry. The snowball takes its name from its spherical shape and traditional icing sugar decoration. In addition to the powdered sugar variant, the snowballs are sold in numerous other variations and with different fillings.

A map with all the sights of Rothenburg

On the following Google MyMaps map we have mapped all the important sights of Rothenburg.