Stavanger is the last stop of our wonderful journey with AIDAsol through the Norwegian fjords. So far, we have experienced very beautiful and unforgettable moments on the cruise, which we will remember for a long time. Today in Stavanger will definitely be part of it 🙂

Things to know about Stavanger

In the early morning at around 8.30 am we arrived at the port in Stavanger and were – as so often on the route – the only ship at the pier. AIDA has a great berth here, right at the historic city centre and only a 5 minute walk to the city centre.

With a population of around 130,000, Stavanger is the fourth largest city in Norway and today an important port for cruise tourism. In the 16th century, Stavanger was an important fishing site. Later, Norway’s first canning factory opened here at the end of the 19th century, which made Norwegian oil sardine known beyond national borders. The canning industry boomed, so there were more than 50 canning factories in the city in the 1950s – but the last one was closed in 2002. There was a second big boom for the city when oil was discovered in the North Sea in 1969, about 300 kilometres from Stavanger. The oil reserves made Stavanger one of the richest cities in Norway. In the meantime, many international oil companies are based here, including the largest Norwegian company Equinor ASA with more than 21,000 employees.

The AIDA Port Info of Stavanger

Our journey from Stavanger to Preikestolen

Shortly after the ship was released for land, we were one of the first to leave the ship. A driver was already waiting for us in front of the ship, who picked us up for our private tour today to Preikestolen. We had decided for a private tour, because today we wanted to be in front of all the tourists and AIDA excursions at the Preikostolen. But we couldn’t have guessed that our plan didn’t quite work out 😉

By car we went first through the city to the ferry port Fiskepiren of Stavanger. In a small car column we went on the ferry, which took us to the other side of the bay to Tau within about 40 minutes. From Tau we drove again for about 25 minutes until we arrived at the parking lot of the Preikestolen Mountain Lodge, which is the starting point for the 4 km long hike to Preikestolen.

With our driver we agreed a time when he would pick us up here and then our hike started. Preikestolen, we come 🙂

Alternatively: On your own from Stavanger to Preikestolen

By the way, the tour to Preikestolen can be organized very easily yourself at a significantly cheaper price:

(1) In Stavanger you walk about 20 minutes from the harbour terminal Strandkaien to the ferry terminal Fiskepiren.

(2) The ferry then takes you to Tau. A one-way trip costs about 6 euros, tickets can be purchased on the ferry. You can find out more about the currently valid ticket prices here.

(3) At the ferry terminal in Tau there are already the buses that take you to Preikestolen. For the round trip you have to reckon with a total of 25 euros. The timetable of the buses depends on the timetable of the ferry. Buses usually run from April to September; outside of the season you would have to take a taxi. More information about the departure times of the buses can be found here.

(4) After about 30 minutes bus ride you arrive at the parking lot of the Preikestolen Mountain Lodge.

Alternatively, you can find other organized tours from Stavanger on the Internet.

Our hike to Preikestolen

From the parking lot we went uphill for us at around 10.30 a.m. in the direction of Preikestolen. It didn’t take us a minute to realize that we were way too late here, because the first people came to meet us again! So if you are not travelling by cruise ship and therefore cannot really determine your take-off time, you should definitely be very early here.

But we didn’t let the other people stop us and we kept going with motivation. The entire route is indicated with a length of 4 kilometres and sections of varying length. When we had researched in advance, it was said that it takes about 1.5 to 2 hours to reach your destination. 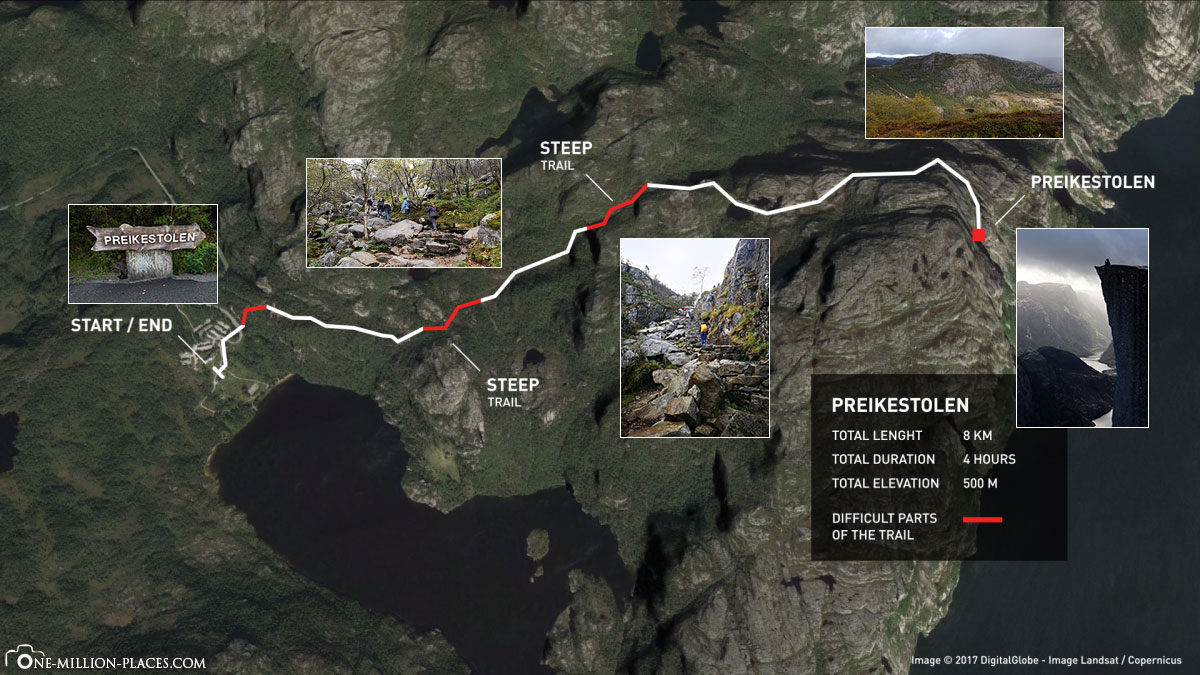 A map of the hiking trail to Preikestolen

Today was unfortunately quite rainy again and again. Since we ran off in drizzle and there were also sometimes cloud breaks (sometimes even with hail!) the stones on which one ran for the most part were quite slippery. Therefore, extreme caution is required here and good hiking shoes are definitely an advantage. Especially since some stages are also really steep – after all, you overcome a difference in altitude of about 500 metersduring the hike to the Preikestolen. By the way, some of the heavy stone slabs of the hiking trail were laid by Nepalese Sherpas (“high mountain carriers”). Their perseverance and ability to carry heavy loads have predestined them for this job.

While walking along the path, you always have great views of the surroundings: small lakes, rivers, streams, a beautiful mountain landscape. And from time to time even the sun came out and accompanied us on our way. We took small breaks again and again and after about 90 minutes hike we arrived at the Preikestolen.

The Preikestolen is a 25×25 metre rock plateau at 604 metres above the Lysefjord and is one of Norway’s most famous tourist attractions and photographic motifs, and certainly one of the most spectacular natural monuments in the world. More than 300,000 visitors climb the rock pulpit every year – that makes about 900 to 1,000 visitors a day! Feeling half of it was already there when we arrived at the top, because it was really full and no trace of natural idyll:screaming children, tour groups and queues at the top photo spots. We did not let ourselves be fooled by this, but enjoyed the view first, because it definitely compensates for the long hike and the crowds: from above you have a breathtaking view of the 40 km long Lysefjord. The passing excursion ships seem almost tiny.

But also the view on the Preikestolen is great. It is assumed that the rock was formed thousands of years ago by a frost blast, i.e. water penetrates into crevices and freezes there. As a result, large angular boulders were blown off.

What surprised us a lot is that there are no safeguards, i.e. you can really go to the edge of the rocks and is not protected. We were also not able to find any reports of any accidents on the Internet, so fortunately everything has gone well so far. One should be careful, because a wrong step can transport a 600 meters into the depth.

After spending about an hour on the rocky plateau, we slowly walked back towards the parking lot. Luckily, the weather had improved a bit and it had stopped raining. 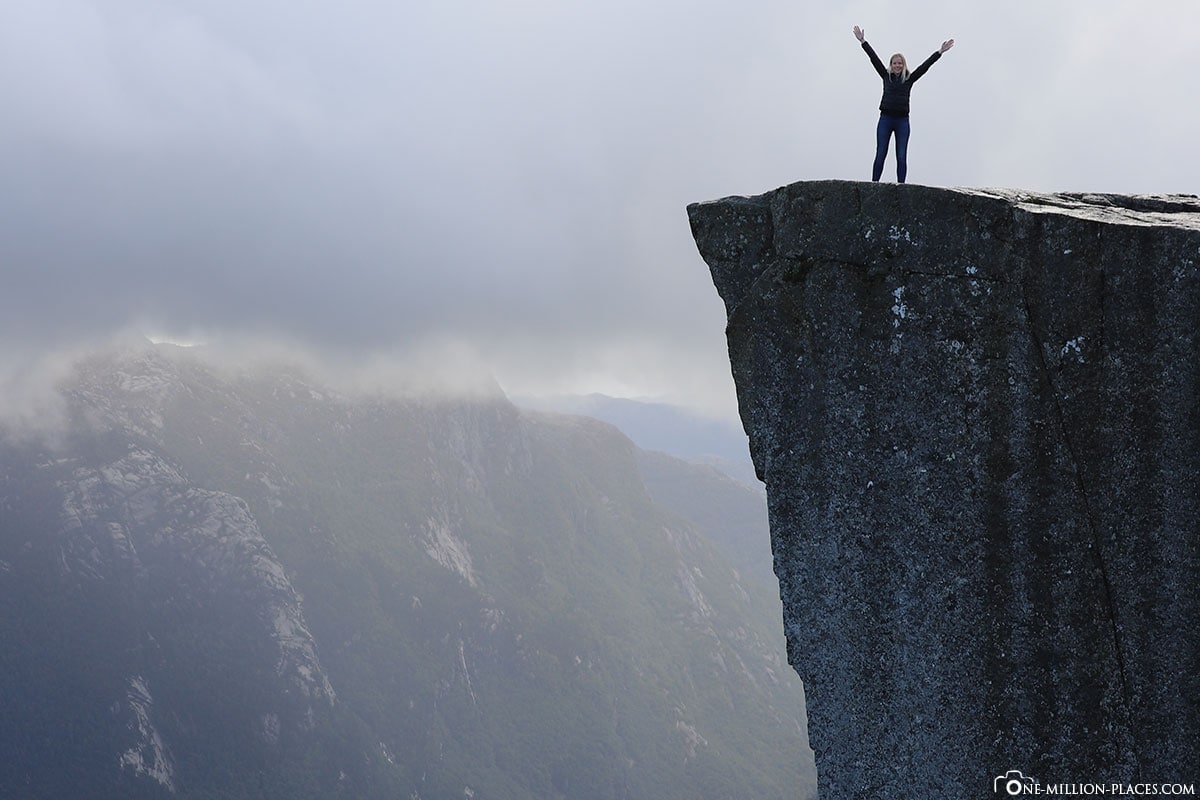 The 3 Swords in the Mountain

The monument “The 3 Swords in the Mountain” is a symbol of the national union of Norway and is located just outside Stavanger on the bay of The Hafrsfjord. From the city centre it takes about 10 minutes by car to get to the monument.

The monument is intended to commemorate the Battle of the Hafrsfjord, which took place here in 872. Harald Schönhaar united Norway into a kingdom here and thus became the first king of the country. The three swords with their three crowns symbolize the three main regions of Norway: the north, southeast and southwest. On the other hand, they also stand for peace, unity and freedom.

A walk through Stavanger

After visiting the 3 swords, our driver dropped us off at the central square directly in front of the cathedral church. From here we wanted to explore the city a little on our own.

Stavanger Cathedral is the oldest episcopal church in the country. It was completed in 1150 as an Anglo-Norman church. After a fire in 1272, parts of the church were rebuilt in Gothic style. We particularly liked the small cobbled streets in Stavanger. We were particularly fond of the street “Evre Holmegate”, because here the wooden houses are painted in very expressive colours and thus give off super photo motifs. The houses have shops, bars and cafés. At the harbour basin of Stavanger there are still about 60 storage houses,some painted colorfully. They used to be used for salting the herring and storing salt and barrels. The owners lived on the back. Today there are many restaurants, offices and apartments in the storehouses.

In the early morning we were able to take a quick look from above on the old town of Stavanger. But of course we didn’t want to miss a stroll through the white alleys before the ship departs. In Gamle Stavanger, which is located on the west side of the harbour basin, there are 173 listed white wooden houses from the 18th and 19th century. This makes Gamle Stavanger the best preserved wooden house settlement in Europe. In the past, the houses were the accommodation for sailors, craftsmen and fishermen. Today most of the houses have been lovingly restored and are a real sight.

We could have walked through these narrow cobbled streets forever. One house was more beautiful than the other, some of the facades had grown with flowering flowers. By the way, the city of Stavanger pays financial subsidies to the inhabitants of the district, so that they maintain and maintain their houses in the historical style.

Just in time at 6.30 pm we were back on the ship and say on AIDAsehen Stavanger. A beautiful cruise with AIDA through the Norwegian fjords comes to an end. The next stop is Hamburg 🙂 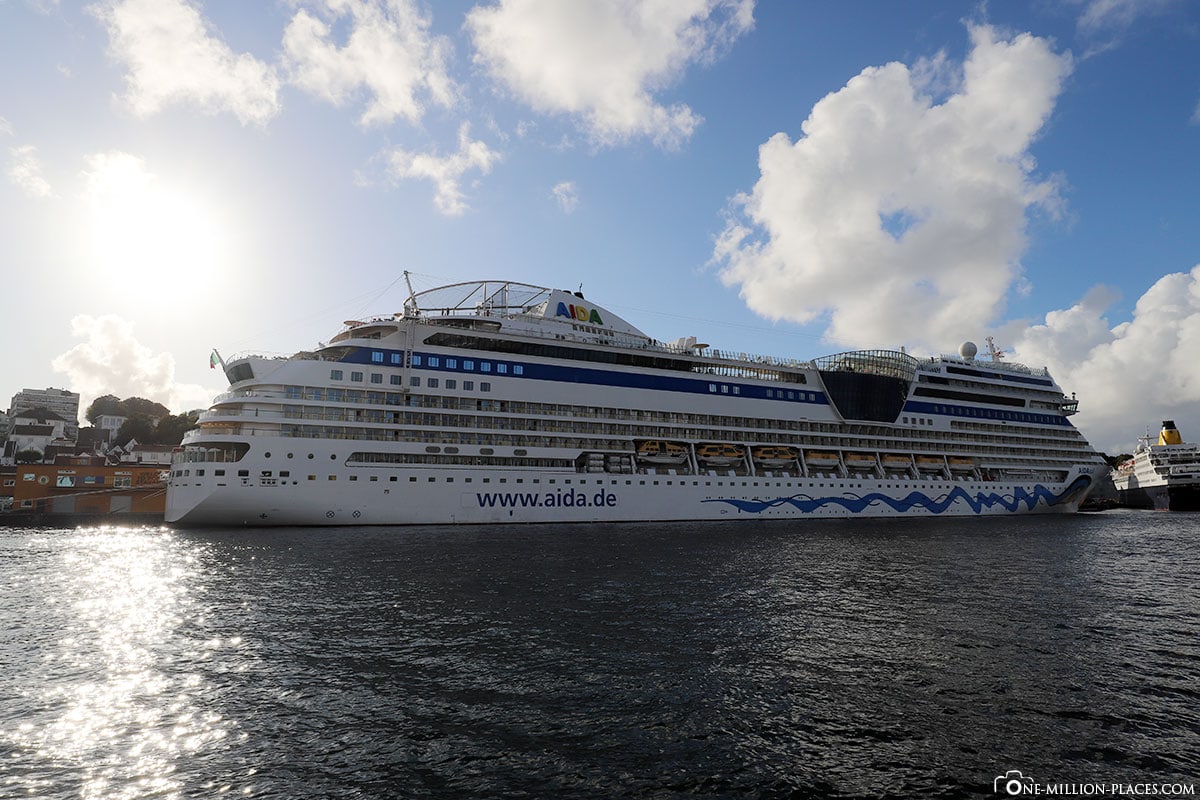 Stavanger has several Starbucks stores, but unfortunately the cup was completely sold out everywhere. That’s why we subsequently bought the cup on eBay 🙂

The Starbucks City Cup of Stavanger