If you are in Rome, a visit to the Vatican – the smallest generally recognized state in the world – and the St. Peter’s Basilica must not be missed.

The city-state is an enclave in Italy within the urban area of Rome, has an area of almost half a square kilometer and with about 840 inhabitants is also the state with the fewest inhabitants. The territory of Vatican City includes St. Peter’s Basilica, St. Peter’s Square, the Vatican Museums, the Sistine Chapel, and the palaces and gardens within the Vatican walls.

The square in front of St. Peter’s Basilica is St. Peter’s Square, whose colonnades form the state border between Vatican City and Italy. Every Sunday at 12 o’clock the Pope (from an open window) speaks the Angelus prayer in St. Peter’s Square, gives a short speech and blesses those present.

In St. Peter’s Square, the Pope celebrates Mass in front of a hundred thousand people. From the balcony in the middle of the facade of St. Peter’s Church, he then gives the blessing “Urbi et Orbi”. On the 2nd day we had the opportunity to experience this live, even if the weather was not so nice.

St. Peter’s Basilica holds 20,000 people and is one of the largest church buildings in the world with an overbuilt area of 15,160 m2. Before entering the cathedral, visitors must pass through extensive security checks; appropriate clothing is also taken care of (covered shoulders and knees).

An insider’s tip is the German cemetery Campo Santo Teutonico, which is located on the western side of St. Peter’s Basilica (Google Maps). This high-walled small cemetery is located about 70 meters within the Vatican walls and still enjoys extraterritorial status, i.e. the cemetery is not part of the Vatican City, but is located on Italian territory, but is only accessible via Vatican territory. Germans and Austrians must be allowed to reach this oasis of silence without hindrance. So when you address the Swiss Guards on German and say that you want to go to Campo Santo Teutonico, the guard lets one through in the morning. The cemetery is now a green oasis and a place of silence in turbulent Rome.

A visit to the Vatican Museums, which mainly house the papal art collections, is also recommended. The collection is one of the most important and largest in the world and the most famous part that can be visited during a visit to the museum is the Sistine Chapel. 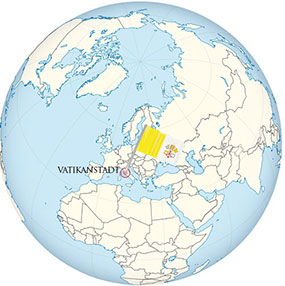