After driving a beautiful panoramic road on the Pacific Ocean of California yesterday with the 17-Mile Drive, we made our way to Los Angeles today on Highway 1.

Things to know about the Highway 1

Highway 1, also known as California State Route 1, is a north-south scenic road that runs along California’s Pacific coast. With a total length of just over 1,055 kilometers, it is the longest state road in California. The name is “Highway 1” on everyone’s mouth, but depending on the section, the road also bears other names, such as Pacific Coast Highway, Cabrillo Highway, Shoreline Highway or Coast Highway.

If possible, you should drive highway 1 from north to south, as you can then drive on the sea side and enjoy the beautiful views even better. The northern terminus is on US Route 101 near Leggett in Mendocino County (300 kilometers north of San Francisco), and the southern terminus of Highway 1 is on Interstate 5 near Dana Point in Orange County ,south of Los Angeles. The road not only passes numerous attractions, but also serves as an important thoroughfare, especially in the Greater Los Angeles Area, the San Francisco Bay Area, and several other urban coastal areas. The highlight is certainly the crossing over the Golden Gate Bridge, over which Highway 1 also leads.

The highway was built in various stages, with the first section opening in the Big Sur region in the 1930s. The designation State Route 1 was first designated in 1939. Unfortunately, since much of the route runs directly along the coast, landslides and erosions result in several sections being closed for repairs for a long time or moved inland. We were actually lucky that there were no closures in our time and were able to drive our planned route from Monterey to Los Angeles. 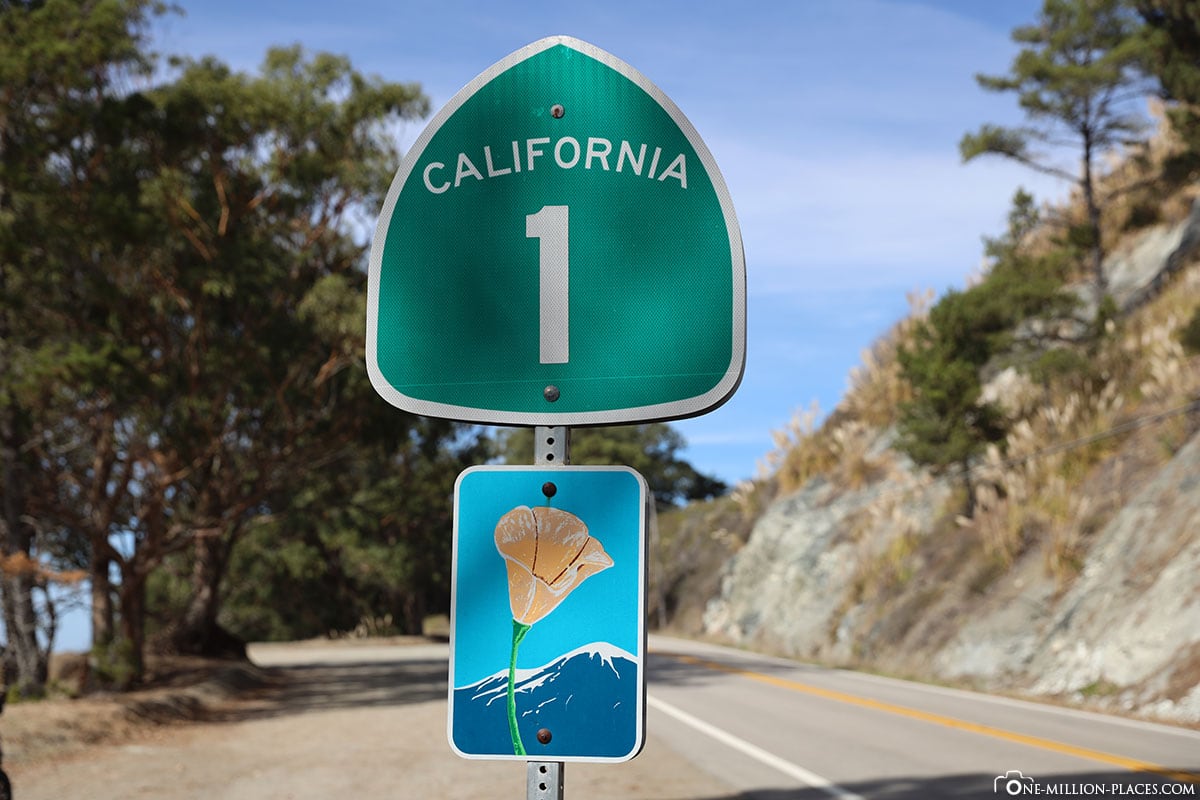 We have stored a map of Highway 1 with all the major attractions between Monterey and Los Angeles in Google MyMaps.

Highway 1 with all photo stops between Monterey and Los Angeles

The most beautiful photo spots between Monterey and Los Angeles

The route is very popular with tourists because of its scenic beauty and numerous attractions. In particular, the section between San Francisco and Los Angeles is very busy, as there are some nice photo stops here. Some of them that we have visited from Monterey to the south, we show you here:

The separate (and chargeable) 17-Mile Drive between Monterey and Carmel-by-the-Sea is the first major attraction on Highway 1 southbound. We have written a separate travel ointt with many more information: The most beautiful photo spots on 17-Mile Drive

The 218-metre-long and 85-metre-high Bixby Creek Bridge is automatically passed when you drive along Highway 1. It is located about 28 kilometers south of Monterey. The bridge is certainly one of the most photographed bridges in California, along with the Golden Gate Bridge. By car you can park directly at the stop ‘Castle Rock Viewpoint’, from where you can photograph the bridge very well.

If you come from the north and pass the Pfeiffer Big Sur State Park on the left, a small turn off on the right. This somewhat uneven, narrow path led us 3.5 kilometers to Pfeiffer Beach. We were a bit irritated when we got to a small ranger house and 10 USD day entry (per vehicle) for the beach were demanded. We thought a little bit at first, but then we paid the fee and drove to the almost empty parking lot. But in the end, the visit was worth it. Apart from the fact that the beach was almost deserted, the sand showed itself in a purple color. We walked along the beach a bit and then we could see several dolphins that have let off the ground in the waves and ridden them. What a spectacle 🙂

McWay Falls is part of Julia Pfeiffer Burns State Park and is located about 60 kilometers south of Carmel-by-the-Sea.

It is best to park in the parking lot of Julia Pfeiffer Burns State Park by car. At the park entrance there is a small ranger’s house, where you usually have to pay your entrance fee of 10 USD per car. When we went into the park, the house was closed. In this case, you have to put the fees in a small labeled envelope and throw them into a box at the entrance. One section is then placed in the car “as proof” to show that the fees have been paid.

From the parking lot, walk along a small path under Highway 1 for about 5 minutes to the coast. With us, the path was blocked from a certain point for security reasons. From there, however, one had a beautiful view of the bay with the turquoise water, the sandy beach and the 24 meter high waterfall,which falls directly from the rocky cliff to the beach and into the ocean. Due to the high cliffs that surround the bay, the beach is not accessible on foot, but only accessible by boat.

On the way back to the parking lot we made a small detour to a cottage where there is a Pelton turbine. With this, the water of the river was converted into energy. 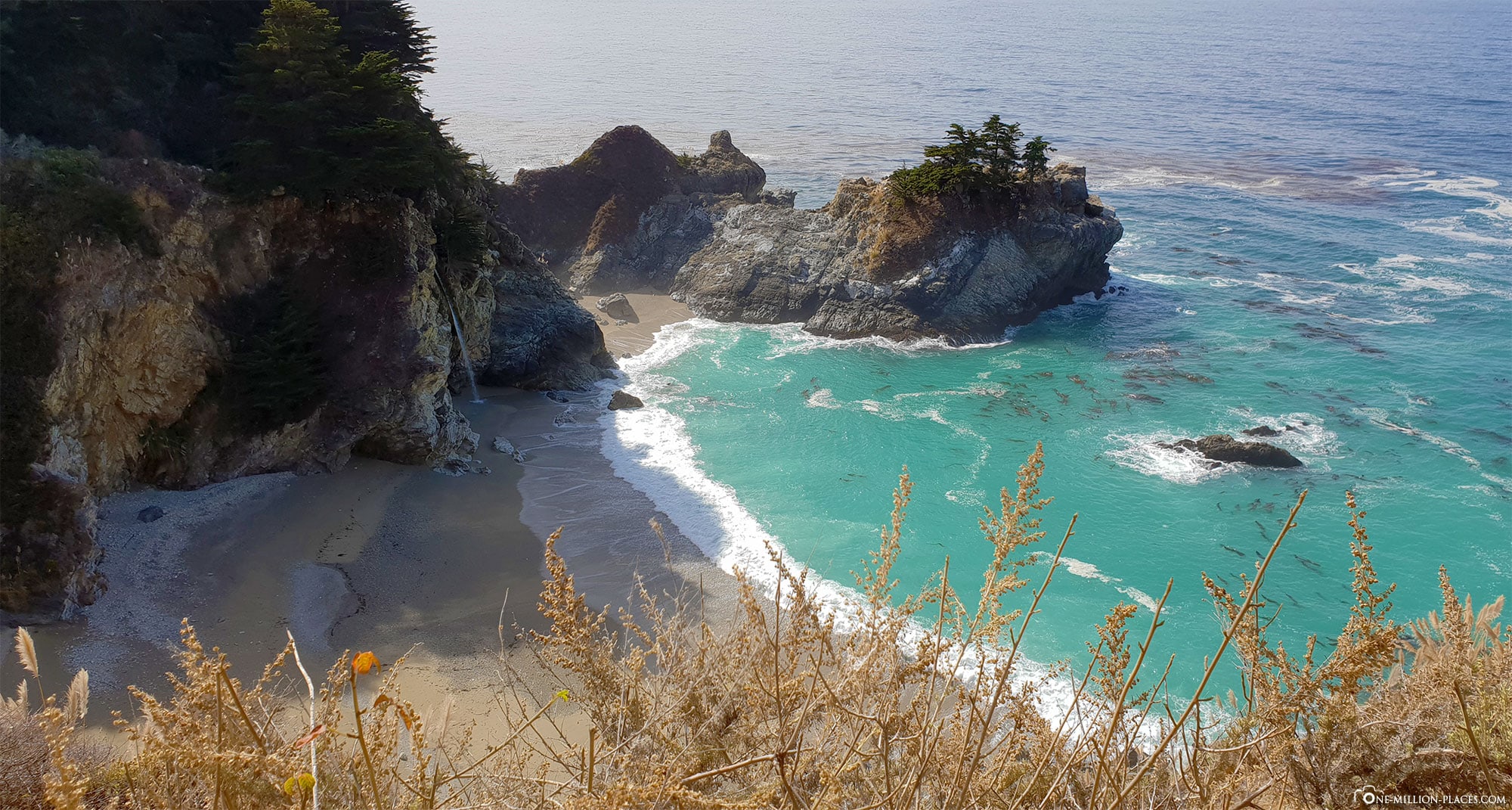 One of the most beautiful stops on Highway 1 was Elephant Seal Vista Point, which is located about 7 kilometers north of San Simeon directly on Highway 1. From the parking lot, a small path leads along above the beach, from which you can directly look at the large colony of sea elephants. Sea elephants are the largest seals in the world and bear their name due to the trunk-like enlarged nose of the adult males.

On the beach it was spooky, noisy and it was just so swarming with sea elephants, seagulls and pelicans. But some were also quite quiet and slept, others fought with each other playfully. There was something new to watch here every few meters, so we could have spent hours here.

Hearst Castle is a castle-like property located above Highway 1 near San Simeon, built and inhabited in the 1920s by newspaper magnate Willliam Randolph Hearst. We have visited the Hearst Castle and show you our impressions of the guided tour in the next post.

On our way along Highway 1 we made a short photo stop in the small coastal town of Morro Bay. There is nothing special to see here, but the Morro Rock off the coast is worth a look that looked really beautiful in the light of the setting sun. 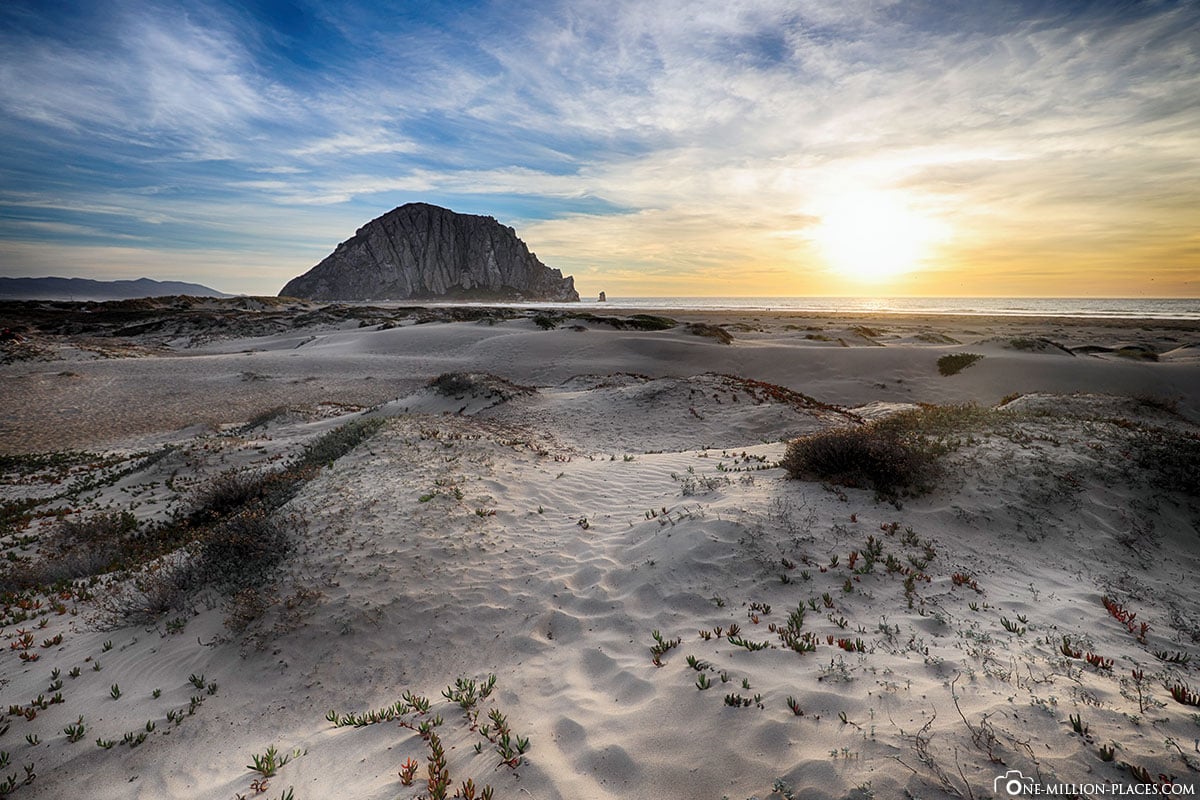 The Morro Rock at sunset

Bubblegum Alley is a tourist attraction in downtown San Luis Obispo, and it’s exactly what its name suggests: a 21-metre-long alley with a collection of used chewing gum on the walls. Here the ghosts are probably different from “Ihhhh, how disgusting!” to “Haha, how cool!”. We hadn’t seen anything like it before and found it kind of funny 🙂

Unfortunately, we didn’t have time to walk through downtown San Luis Obispo. That was a real pity, because there was a small street party here and we liked the city very much at first sight. We would definitely come here a second time, should we be in this area again. 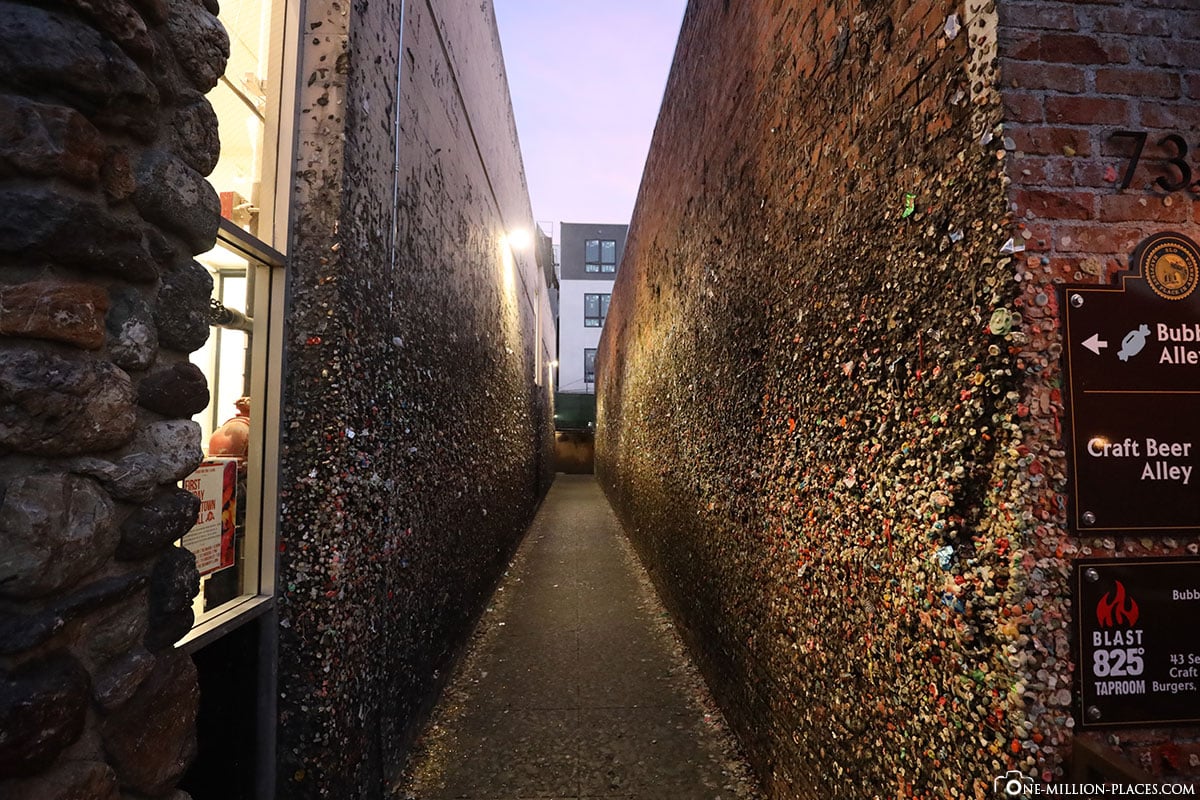 As a stopover on the way to Los Angeles we had chosen the village of Pismo Beach, where we wanted to sleep one night, to start the last part of our route to Los Angeles the next day fit and rested. In addition, the nearby Pismo Beach Premium Outlets were another reason to stay here 🙂

We stayed at the Pismo Beachwalker Inn, a motel-like accommodation for 75 USD per night. One night was quite enough for us here, because unfortunately the room was not clean and we did not feel comfortable either. Therefore, we cannot recommend this accommodation.

The Danish town of Solvang

A few kilometers from Highway 1, Santa Barbara County is still a small sweet town that is definitely worth a visit: Solvang.

Solvang was founded in 1911 on nearly 3,600 hectares by a group of Danish immigrants from the Midwest, who built an elementary school here and later a college. The houses in the town are mostly built in The Danish half-timbered house style, which gives the village its own character. Together with the windmills, the many Danish-style bakeries, restaurants and shops, you don’t feel like you’re in the middle of California. In the city centre there is even a 1:3 scale replica of the Copenhagen Tower ‘Rundet’rn’ and a copy of the famous statue of the Little Mermaid, the original of which can also be found in Copenhagen. We liked the visit to the small Danish-style town very much 🙂

In the city of Santa Barbara, which is about 150 kilometers north of Los Angeles, we have also planned a small stop. However, a visit to the beach was a bit sobering, as we didn’t really like it here. Another stop followed at Coronado Butterfly Preserve, a butterfly garden where we had seen a single butterfly. We think it will get much fuller here at a later time– as in the Pismo Beach Monarch Butterfly Grove. Unfortunately, we weren’t so lucky. On the way to Los Angeles we finished our shopping tour in the Camarillo Premium Outlets.

More impressions of Highway 1 in California

In total, you should plan for the section of Highway 1 between Monterey and Los Angeles at least 2 full days with an overnight stay in the middle of the route (e.g. in Pismo Beach, Morrow Bay or San Luis Obispo ). If you have a little more time at your disposal, you can certainly spend 3 to 4 days along this beautiful coastal road 🙂