Already during our holiday preparation we were especially looking forward to the Yellowstone National Park. The pictures and reports we had seen on the Internet in advance were simply breathtaking. So we were very excited about what to expect.

Things to know about the Yellowstone National Park

Yellowstone National Park was founded in 1872, making it the first and oldest national park in the world. It is named after the Yellowstone River, which flows through the national park. The park is famous for its location above the yellowstone volcano’s magma chamber and its approximately 10,000 geothermal springs, 300 geysers, bubbling mud pots and great scenery. It has been a UNESCO World Heritage Sitesince 1978.

Every year, around 3 million guests visit Yellowstone National Park, whose tourist possibilities are very diverse: in addition to mountaineering, kayaking, fishing, horseback riding and wildlife watching, there are around 2,000 km of marked hiking trails that spread throughout the area and pass the natural beauties.

The park can be reached via the airports of Cody, Jackson (WY), Bozeman, Billings, Idaho Falls or West Yellowstone. By car, you can reach the north entrance on Highway 89 and the west entrance via Highway 20 or 191 at West Yellowstone.

Yellowstone’s main roads are the five access roads coming from different directions, as well as the inner ring road, which is about 230 km long. In the ring you will find, among other things, the visitor centre and various museums. Entrance to the park costs for 7 days 35 USD per vehicle. There are a few days of the year when admission to all national parks in the U.S. is free. This is on the following days: Birthday of Martin Luther King, Jr., First Day of National Park Week, National Park Service Birthday, National Public Lands Day, Veterans Day.

If you visit several national parks on your holiday trip, the so-called America the Beautiful Pass can be worthwhile. The pass costs 80 USD (valid for up to 2 adults) and covers entrance fees for over 2,000 recreation areas (national parks, wildlife reserves, forests, etc.).

Yellowstone National Park is open all year round. However, most entrances and roads are closed to traffic from the beginning of November to the end of April. The road from the north entrance to Cooke City is open all year round. During the winter months, the roads in the park are only accessible to snow vehicles. As soon as the roads are reopened after the winter season, they are passable 24 hours a day.

During the summer season, all visitor centres and information stations in the National Park are open. Most visitor centres are open from 9 a.m. to 5 p.m., the exact opening hours can be found in the park brochure.

A map of the National Park

A clear large map of Yellowstone National Park can be found here. 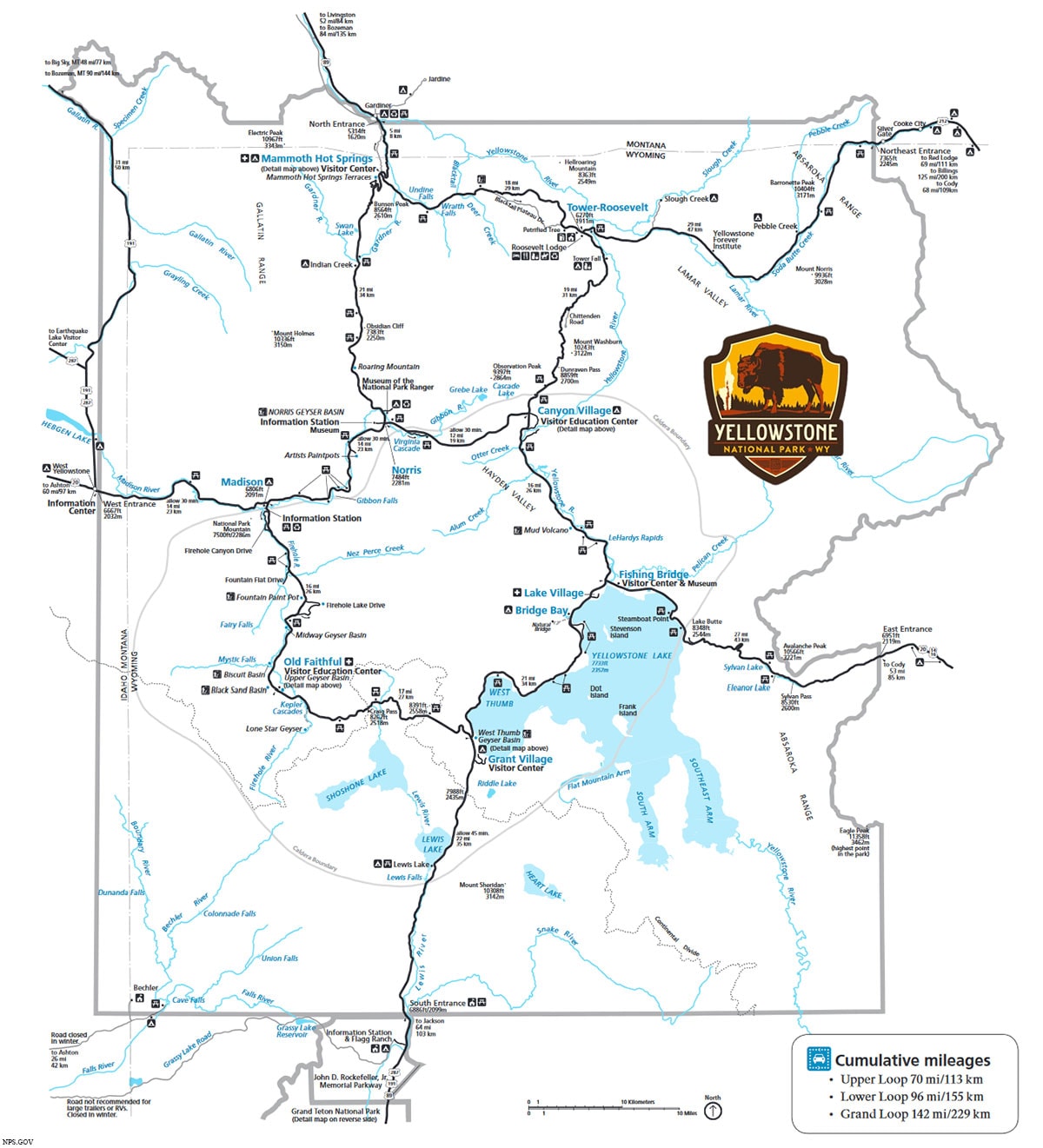 A map of Yellowstone National Park

Our hotels in the park

One of the few properties still open in Yellowstone National Park in October is the Old Faithful Snow Lodge, where we booked a room for a night in a “Western Cabin” for the price of $171. For the 2nd night, we’ve booked a room at the Best Western by Mammoth Hot Springs for a whopping $110, just outside the northern entrance of the national park in the small local Gardiner.

What to see in Yellowstone National Park?

We drove off the most important spots in Yellowstone National Park in 2 days. As you can see on the following map on Google MyMaps, the hotsmail are almost all in a loop (the inner ring road), which you can drive very well with your own car.

Discovered in 18070, Old Faithful is arguably the most famous geyser in Yellowstone National Park. His reputation stems from the fact that it erupts at very regular intervals. You can accurately predict its eruptions at about 10 min. It breaks out every 60 to 90 minutes for 1.5 to 5 minutes and sprays water fountains about 30 to 55 m into the height. The cause of this activity is the water that seeps into the porous lava rock, which is heated by the magma chamber of the volcano and re-enters the earth’s surface in the form of hot springs, geysers or blubbering mud holes.

The eruption of the Old Faithful Geyser is a great spectacle to watch. The exact times for the eruption can be obtained from the nearby visitor centre.

The Lower Geyser Basin is the largest geyser basin in the Yellowstone National Park area, where you can admire fumarole, erupting geysers, hot springs and fascinating mud pools. Many of the thermal facilities of the Lower Geyser Basin are easily accessible via Firehole Lake Drive.

Particularly interesting are the Fountain Paint Pots, which can best be admired over the 800 m long Fountain Paint Pot Trail, which passes close to several hydrothermal springs. The different red, yellow and brown tones of the sludge come from the different oxidation states of the iron in the sludge. As with all hot springs, the heat in the caldera pushes pressurized water upwards through the ground, which is ejected here. Additional ascending gases cause the bubble formation, which varies with the seasons. In early summer, the mud is watery due to the high groundwater level due to rain and snowmelt. At the end of summer, the mud is much thicker as the groundwater level drops.

In addition to these mudslides, there are several important geysers nearby, such as the Fountain Geyser, which usually has several large eruptions per day, the Clepsydra Geyser and the Morning Geyser. These geysers achieved

Our next stop was the West Thumb Geyser Basin on the shores of Yellowstone Lake. The heat source of this area is relatively close to the earth’s surface at a depth of about 3,000 m. The basin was formed by an eruption of the Yellowstone volcano about 125,000 to 200,000 years ago. Later, the resulting caldera filled with water, extending Yellowstone Lake.

Probably the most famous hydrothermal object in the West Thumb Geyser Basin is a geyser on the lakeshore called Fishing Cone. At the beginning of the 20th century, this geyser had eruptions of up to 12 m in height. However, as the water level in Yellowstone Lake has risen over time, the opening is flooded in spring and temperatures have cooled to such an extent that the geyser no longer erupts and is “only” a hot spring.

When visiting Yellowstone National Park, don’t miss the Mud Volcano Area, which is located north of Yellowstone Lake. Most of the attractions in this area are located just outside the car park and are very easy to reach. You can expect boiling, bubbling masses of mud here. The reason for this phenomenon is that overheated water vapor and volcanic gases come to the surface. And since the soil in these places is rich in volcanic ash, clay or other fine particles, they mix with water to mud. The mud is rich in iron sulphides and is therefore dark grey.

Another highlight is the so-called Dragon’s Mouth spring, which bubbles out of a deep cave. Gases and steam are released deep in the cave, creating pressure bubbles that explode against the cave roof. This creates a kind of roaring and gurgling sound that echoes through the cave and can be heard from the pedestrian path. Due to the high temperature of the water, large amounts of steam rise from the cave entrance, giving the impression that smoke is rising from a dragon’s mouth.

Der Grand Canyon of the Yellowstone

The Grand Canyon of the Yellowstone is an impressive V-shaped gorge in the National Park, which stretches for about 32 km. The canyon through which the Yellowstone River flows is about 250 to 400 m deep and between 500 and 1,300 m wide. Due to the geothermally discolored iron deposit in the rock, the canyon is colored yellow, orange to red.

You should definitely look at the Upper and Lower Falls, which are formed by the Yellowstone River. The first waterfalls, the 33.2 m high Upper Falls, can be seen from the “Brink of the Upper Falls Trail”, from the beginning of the “Brink of the Lower Falls Trail” and from the viewpoints of Uncle Tom’s parking lot. Lower Falls is 93.9 metres high and can be admired from Inspiration Point, Grandview Point, Lookout Point and Artist Point viewpoints.

At the southern end of the Grand Canyon of the Yellowstone are the 29-square-mile Crystal Falls, which is best seen from the South Rim Trail.

Our next stop was at the Norris Geyser Basin, which is the hottest hydrothermal area in Yellowstone National Park. There, with the Steamboat Geyser, is the largest active geyser in the world, whose water fountain can reach a height of more than 90 m. Unfortunately, the eruptions of this geyser are not as predictable as the Old Faithful, as the main eruptions take place very irregularly. It is therefore quite possible that between two outbreaks there are four days to 50 years. Since March 2018, there have been regular outbreaks to be admired again.

The Bisons in the National Park

The bison herd in Yellowstone National Park is probably the oldest and largest public bison herd in the United States. In 2019, the herd, which belongs to the species of American bison, was estimated to be just over 4,800 bison.

The Grand Prismatic Spring is and remains our absolute highlight in Yellowstone National Park. With a basin size of 75×91 m and a depth of 91 m, the Grand Prismativ Spring is the largest thermal spring in the USA and the third largest in the world. On average, 2000 litres of 71 °C of hot water flow from the source per minute.

From the parking lot, a pedestrian path leads along the edge of the spring. We have to admit that from this perspective we found the Grand Prismatic Spring to be relatively unspectacular. So we were looking for a way to a nearby hill from which we had a breathtaking view of the spring – the sight really flashed us. From up here you could see the colors and the extent of the pool much more beautifully and clearly.

The colourful colours come from single-celled microorganisms (e.g. bacteria) on the edge of the thermal spring, which is already very rich in minerals. Due to the different water temperatures, they move between orange and red in summer, whereas in winter they tend to be dark green.

Mammoth Hot Springs is the name of the capital of Yellowstone National Park, located near the northern entrance at an altitude of 1,902 m. The village owes its name to the nearby sinter terraces and hot springs, which were discovered in 1871. The sinter terraces are created by the fact that through the hot springs constantly about 70 degrees hot water flows over the terraces. This water contains a lot of lime and minerals, which are deposited on these terraces and have formed over time. Today, the water stores up to two tons of limestone per day. The flow of water also creates shallow basins in which algae and bacteria settle. Depending on the water temperature, these have different colors – from white to blue, brown, green, yellow, orange or red.

Our Video from the Yellowstone National Park

Here we have a short video with some impressions of Yellowstone National Park.