A visit to the Statue of Liberty is an absolute must in New York. With a figure height of 46 meters and a total height of 93 meters, it is one of the highest statues in the world and is considered the most famous landmark of America.

The location of the Statue of Liberty on Liberty Island

The Statue of Liberty stands on Liberty Island, a small uninhabited island in Upper New York Bay in New York Harbor. The island, along with the former immigration station on Ellis Island, is part of the Statue of Liberty National Monument and is now administered by the National Park Service. Liberty Island is located 600 meters from Liberty State Park in Jersey City, about 1.6 kilometers from Ellis Island and about 2.6 kilometers from Battery Park on the southern tip of Manhattan. 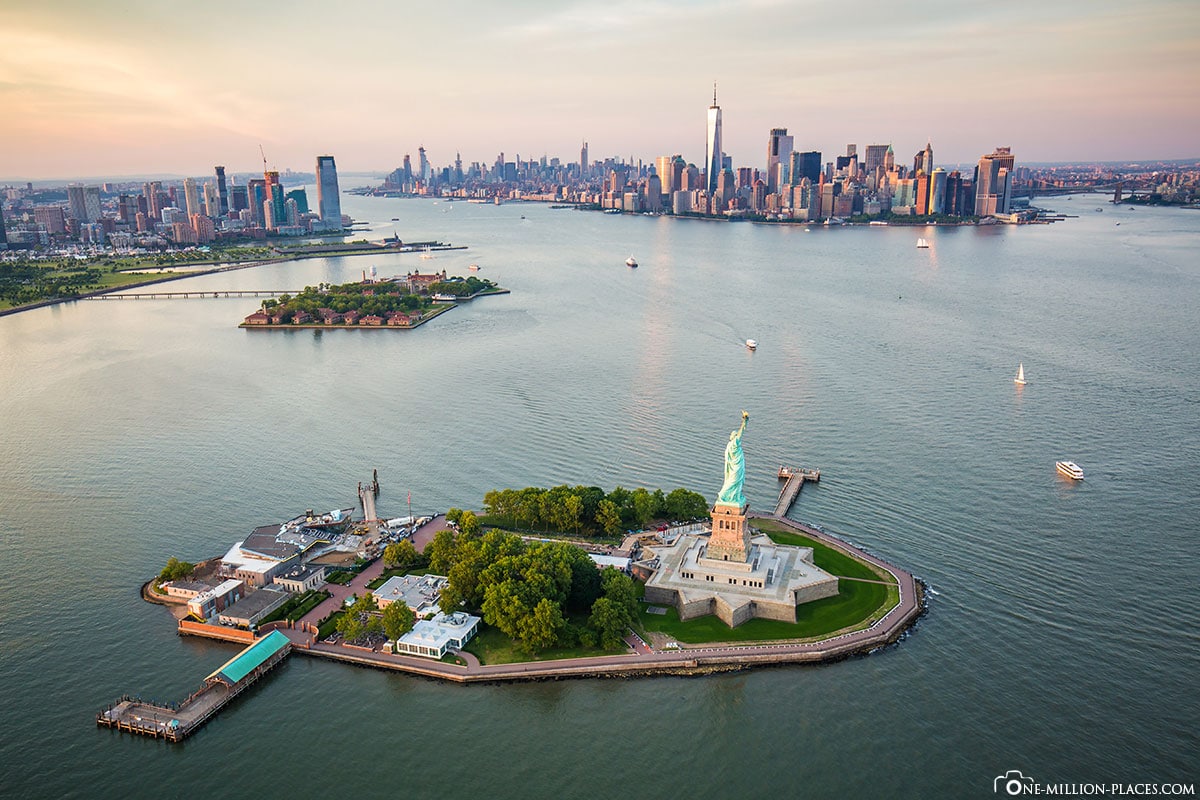 How much does it cost to visit the Statue of Liberty?

There are currently 4 different ticket options: 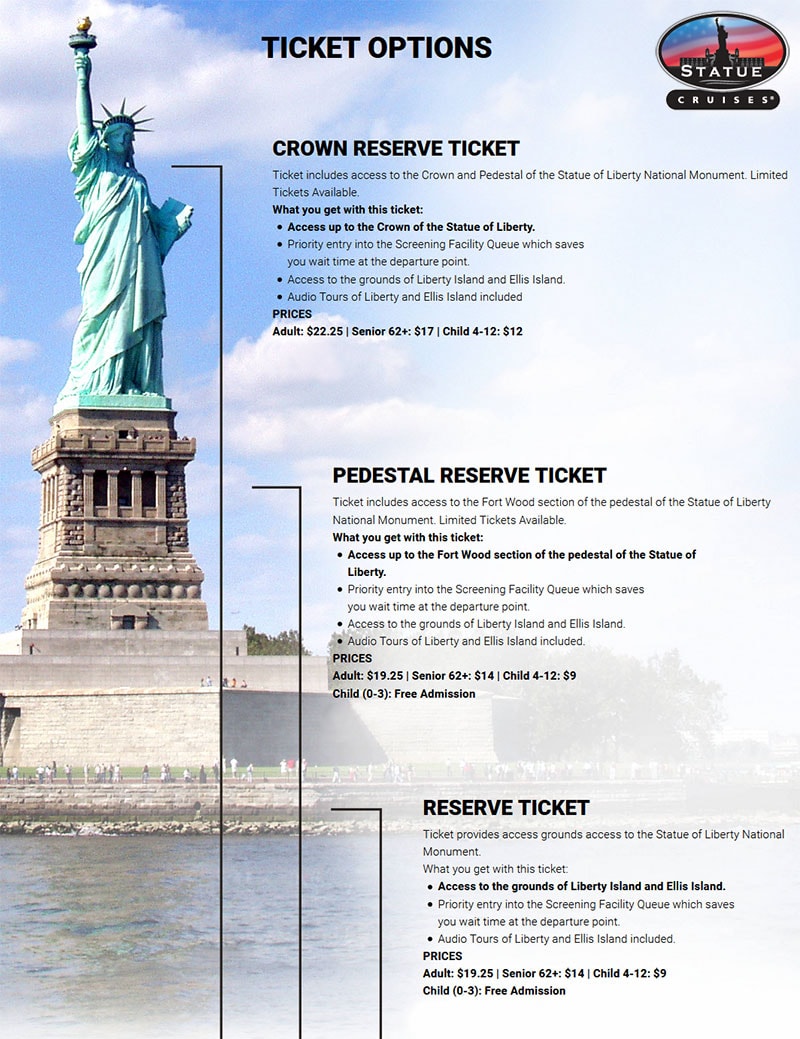 The different tickets for the Statue of Liberty

So you get access to the pedestal and even the crown for just €2.50 more. This is definitely worth it, as it also allows you to take a look inside the Statue of Liberty. Note: With a New York Pass, Explorer Pass or CityPASS you will not have access to the pedestal or the crown. Only the standard ticket is always included in these passports.

Our tip: The tickets with the access to the pedestal and the crown are strictly limited and usually booked out for many weeks in advance. Therefore, you should book here very early via the website of State Cruises.

How to get to the Statue of Liberty?

The ferries of State Cruises depart from Liberty State Park in Jersey City and Battery Park in Lower Manhattan(see map). It should be noted that the ferries from Manhattan are much fuller and therefore long waiting times can arise.

The ferry ride to Liberty Island

If you have bought a ticket from State Cruises, you must first pick it up at the “Will Call” window in Castle Clinton. From here, we continue through the reserve ticket queue into a security check. Before you are allowed to board the ferries of State Cruises, you have to pass strict security checks, similar to the airport. Large bags, backpacks, strollers and other large items are not allowed on Liberty Island and must be stored in lockers.

The ferries to the Statue of Liberty depart about every 20 minutes and there is enough space on the ships. The best views of the Statue of Liberty and the southern tip of Manhattan are already on the way to Liberty Island, which takes about 15 minutes. Therefore, it is essential to look for a good place on the outside and keep the camera at hand 🙂

The view of the statue of Liberty Island

Upon arrival of the ferry, you can freely move around Liberty Island and visit the Freedom Dam from all sides. Shortly after the Liberty Island Ferry Terminal you have the opportunity to get a free audio tour, which leads you to different points on the island and gives historical background information.

The interior of the Statue of Liberty

There are two ways to get inside the statue: you can visit the pedestal or the crown. For both options, however, you have to book tickets in advance as described above. Inside the plinth there is a viewing platform from which you have a good view of the Statue of Liberty and the Manhattan skyline. The crown of the Statue of Liberty is led by a narrow staircase with 354 steps each.

Is it worth a visit?

To answer it briefly: Yes, definitely 🙂 The Statue of Liberty is one of the most important landmarks in the world and to see it up close this time is a very special experience and is definitely part of it for us when we visit New York.

The Statue of Liberty overlooking Manhattan

The immigration station on Ellis Island

After visiting Liberty Island you can take any ferry back to Manhattan or Jersey. There are no times here. But before it goes back to Manhattan, for example, there is a stop on the island of Ellis Island. The island has long been the seat of the State and New York City Immigration Department, and for more than 30 years has been the central collection point for immigrants to the United States. Between 1892 and 1954, about 12 million immigrants passed through the island.

Other ways to photograph the Statue of Liberty

In addition to the trips to Liberty Island, there are of course other ways to see the statue from a distance.

➔ Battery Park: with a good telephoto lens you can also see and photograph the Statue of Liberty, which is about 2.5 kilometers away, from the southern tip of Manhattan (Google Maps).
➔ Helicopter Round Trip: A great (albeit expensive) way to view the statue from the air.
➔ Boat trip with Circle Line: classic tours by boat for tourists
➔ Staten Island Ferry: The Staten Island Ferry is the ferry service between Manhattan and Staten Island. The ferries leave at Whitehall Terminal(Google Maps) and about halfway through there is a great view of the Statue of Liberty and thus an ideal opportunity for photos. In addition, the Staten Island Ferry is free of charge and the round trip can be completed in just over an hour, depending on the punctuality of the ferry.