After 2 really great weeks across California our trip ends in Los Angeles. Since we already knew Los Angeles from previous trips, we had planned only one night here before our return flight to Frankfurt. But nevertheless we visited 3 beautiful places, which we knew from many pictures on Instagram and had not seen ourselves 🙂

Anyone who follows our travels knows that we are active on Instagram, among other things. The platform offers a great way to publish the most beautiful holiday pictures as a photo or as a story and to get direct feedback from the users.

Are you on Instagram? Then of course we would be very happy if you followed us 🙂

The famous, colored angel wings painted on walls … They’ve certainly crossed the path of everyone on social media.

Artist Colette Miller began her Global Angel Wings Project in 2012 in the streets of Los Angeles, the City of Angels. With her works of art, she wanted to remind humanity that we are all angels of this earth. Their murals are interactive, public art on a human scale: wings with which people are supposed to interact and be photographed with them. In doing so, she has created a real hype on Instagram.

Colette Miller has painted these wings in Kenya, Australia, England, Japan, Taiwan, France, Cuba, Mexico and the USA. Although the wings are her work, her public installations are a gift to the world.

You can see the exact location of the pink wings in Los Angeles on Melrose Avenue here on Google. 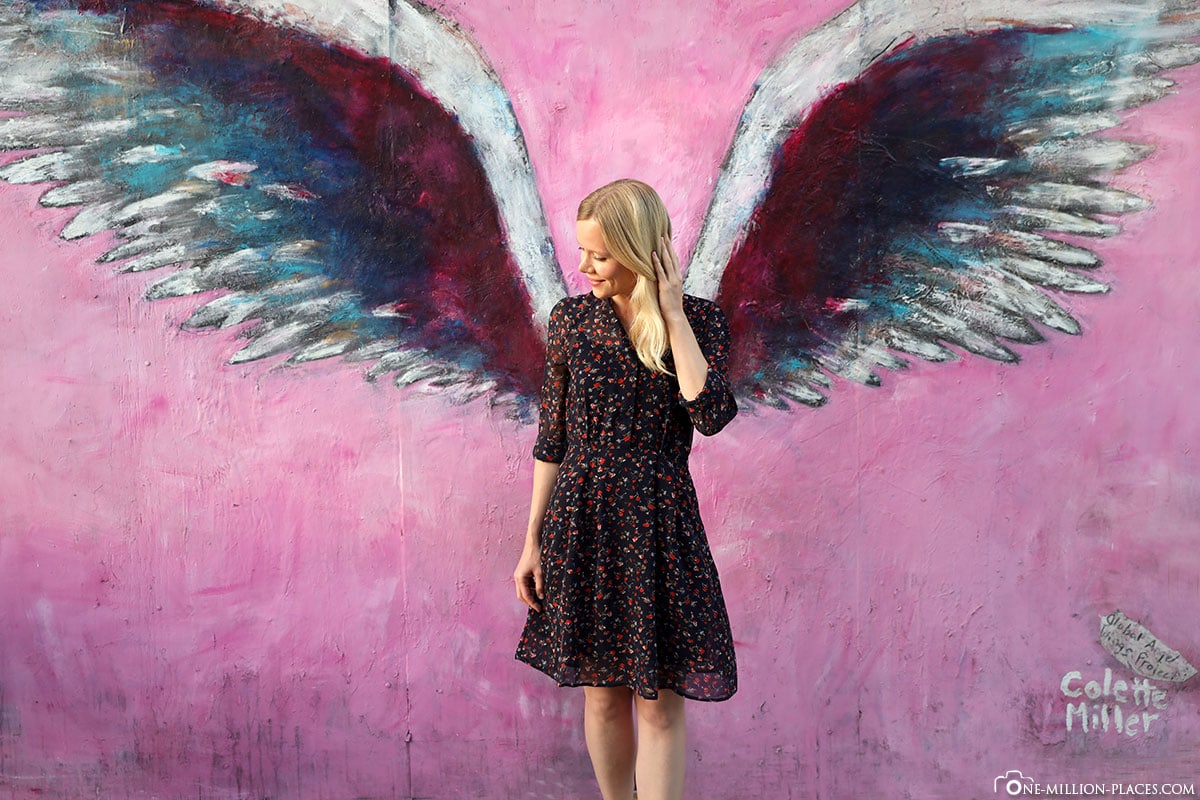 A picture with the wings of Colette Miller in Los Angeles

The mural with the lettering “California Dreaming”

The pink and blue mural with the white lettering “California Dreaming” is painted on the building of a Chinese laundry and points directly to a parking lot. The mural was created by the artist Ricardo Gonzalez, who works under his stage name It’s a Living.

The exact location of the “California Dreaming” mural on La Cienega Blvd. you can view it here in Google Maps. 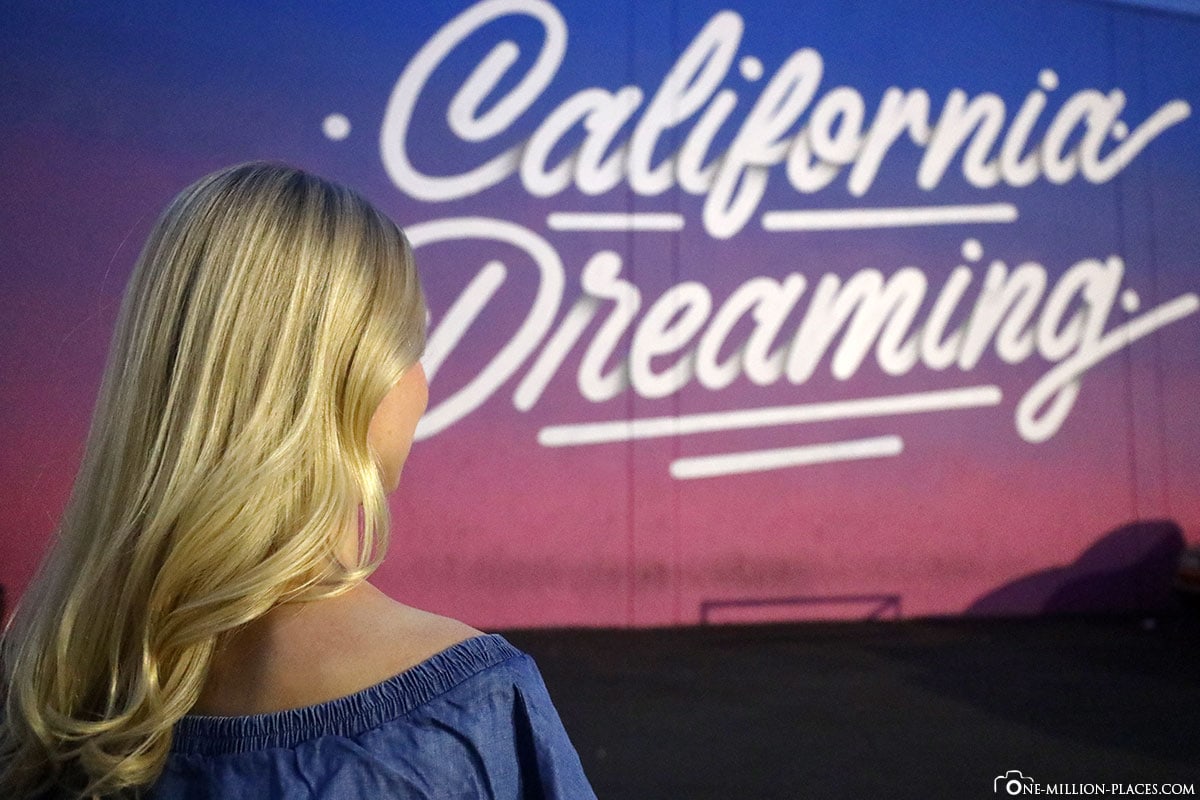 Since its opening on the grounds of the Los Angeles County Museum of Art (LACMA) in February 2008, the installation Urban Light has been unofficially adopted by the city as a symbol of the city and is undisputedly the most popular work of art on the museum’s campus.

The installation at the museum entrance on the side of Wilshire Boulevard is by artist Chris Burden and consists of 202 historic streetlights from the 1920s and 1930s, most of which once lit up the streets of Southern California. Chris Burden started collecting old streetlights in 2000, until it became more and more in his studio. His goal has always been to keep as many streetlights as possible together from his then 150-piece collection. To this end, he invited visitors to visit the streetlights in front of his studio, where he had installed them in dense rows on two sides of the building. Potential buyers in mid-2006 included the Museum of Applied Arts in Vienna (MAK) and the Los Angeles County Museum of Art (LACMA). Eventually, LACMA was awarded the contract and the installations were built on a square in front of the museum. 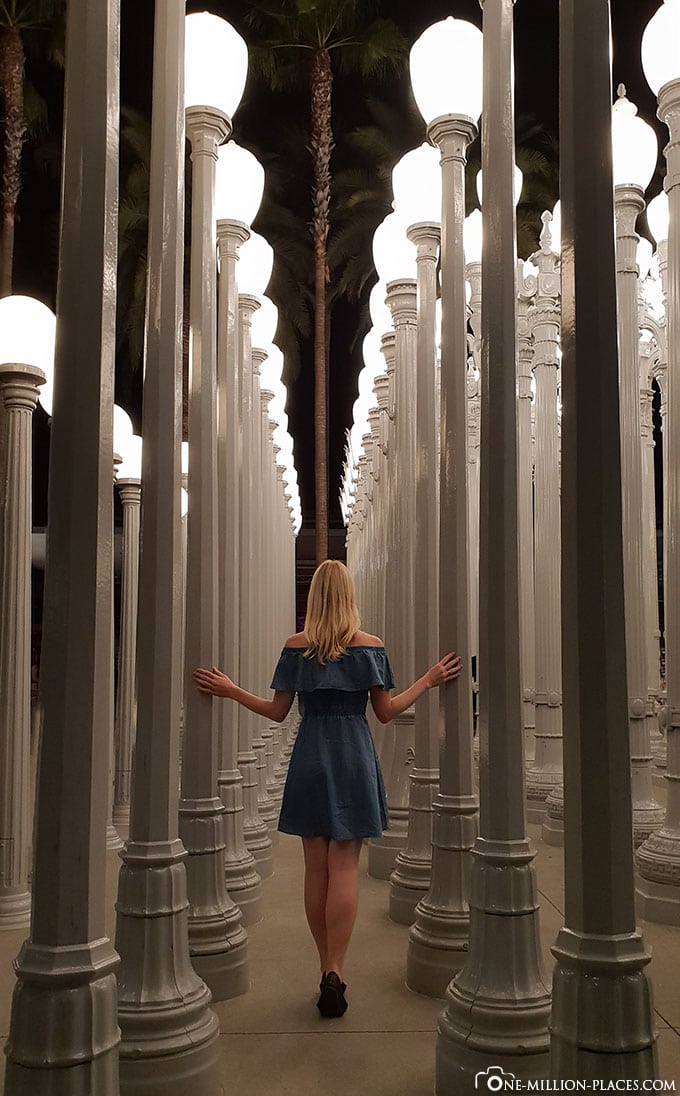 Our picture at the Urban Light sculpture in Los Angeles

Getting a “typical” Instagram photo without other people at prime time just after sunset isn’t that easy. Again and again someone walks through the aisles and you need a lot of patience and a bit of luck to catch the right moment. Then it means being fast and pressing the trigger at the right moment. You can see the exact location of the Urban Light sculpture at the Los Angeles County Museum of Art here on Google.

With these pictures 2 exciting weeks in California and a great journey will end. We have experienced so much, seen so much new things and collected exciting impressions, so it certainly wasn’t the last time we were here 🙂

The Starbucks Cup of Los Angeles

Los Angeles, of course, has a lot of Starbucks stores and also its own cup.