We had once read in a report that Cyprus has one of the most famous shipwrecks in the world – and of course we wanted to see that.

Diving in the Mediterranean

In the meantime we have done over 115 dives in the last 4 years – but have never dived in the Mediterranean. We have made all our dives so far either in the Red Sea, the Indian Ocean, the Pacific, the South Sea or the Caribbean – the Mediterranean, which is actually obvious to us, has not yet been there. Therefore it was clear to us that we definitely wanted to do 2 dives in Cyprus. And since we find wreck diving very exciting and have already dived various shipwrecks or planes in Barbados, Palau, Aruba, Grenada or Cancun, the wreck of the Zenobia has been perfectly heard.

Diving: Our diving reports from all over the world

Why did the Zenobia ferry sink?

The zenobia wreck lies about 1.5 km off Larnaca, in the south of Cyprus, and is considered one of the most important and largest wrecks in the Mediterranean. The Swedish ferry was on a journey from Sweden to Syria in 1980 and then sank off the coast of Larnaca, along with the 104 loaded trucks. The reason for this was a computer error in the ballast system, which apparently caused the ship to tilt by more than 40 degrees. The cargo slipped and the ferry could not be saved and sank off the coast a few days later. 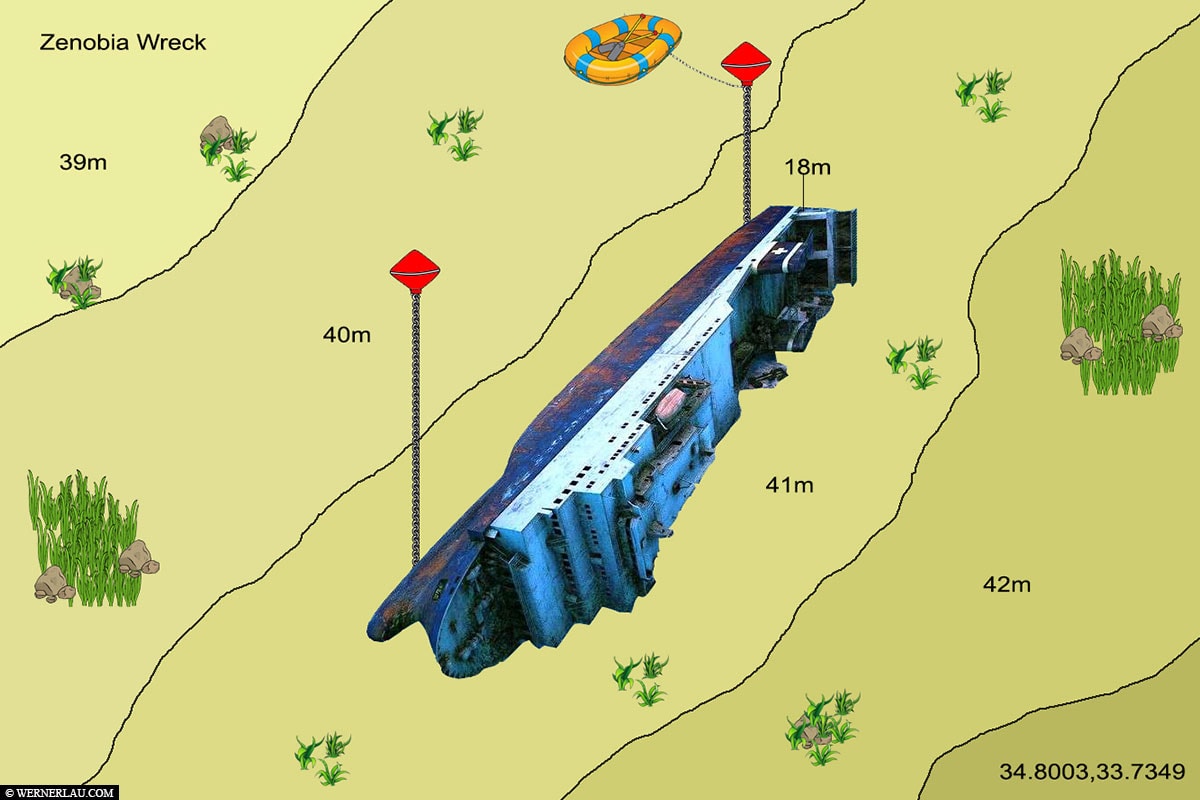 The wreck of the Zenobia in Cyprus

Selection of the diving school

We had already informed ourselves online at home about a suitable diving school, which makes diving trips to the wreck. But since we didn’t know exactly which day we wanted to go diving, we decided to book the dive trip spontaneously on site.

When we did a sightseeing tour in southern Cyprus on one day anyway, we made a short stop at a pre-selected diving school. Unfortunately we were disappointed, because the staff said that they will not go to Zenobia in the next few days, because not enough divers have found themselves for the trip. How annoying. But he was very helpful and immediately called a friend in Larnaca and booked for us two places on a diving boat and a diving instructor right away – and even at a cheaper price than we would have paid in the diving school. Perfect. So the next day we were at the marina of Larnaca at 8.30 a.m., as it was arranged. But unfortunately, nothing could be seen of the diving instructor – of whom we had neither a name nor a telephone number. Luckily, a man from another submersible approached us at the same time and asked if we wanted to go to the wreck of the Zenobia by chance. After explaining our situation to him, we were on the dive boat 10 minutes later – together with about 30 other divers from many different diving schools. The boat goes out to the wreck every day and the various diving schools can rent places there. So do we. Another 10 minutes later we got our diving equipment and a diving instructor was put aside – a Frenchman who was in the sabbatical in Cyprus with his family. So now it was time to go.

Our two dives at the wreck of the Zenobia

During the two dives we were able to dive various parts of the 172 meter long wreck, which lies on its port side at a depth of about 43 meters. On the starboard side, on the other hand, you can already meet a water depth of 18 metres. And the closer you get to the wreck, the more powerful it is. If you want to explore everything here, you probably need at least 20 dives. We only had two, but we have seen some things, such as some of the many trucks, the propeller of the ship’s propeller, a lifeboat and the bridge. Really very impressive. By the way, there was of course also a bit of the underwater wildlife to see, such as groupers, firefish and some other colorful fish. Not as spectacular as in the Red Sea or the South Sea, but that was not the point of these two dives. Here the wreck of the Zenobia was definitely in the foreground.

When we were back on the surface after our two dives, a delicious barbecue was prepared, which we had tasted on the way back to the port. A great excursion, which we can recommend to every diverwho is on holiday in Cyprus.

Video of our two dives at the wreck of the Zenobia

Here is a short video of our two dives at the wreck of the Zenobia.