It was clear to us from the outset that we wanted to explore the entire island of Cyprus on our own with the rental car, because there are beautiful sights in the south as well as in the north of the island.

Rent a car in Cyprus

Finding a rental car in Southern Cyprus (e.g. directly at larnaca airport) is absolutely no problem. Here you will find almost all major suppliers like Europcar, Avis or Hertz and offers are available for less than 10 € per day. This is really extremely cheap!

It will only be difficult if you (like us) want to explore the whole island by car, because almost all car rental companies in Cyprus do not allow to drive by rental car across the border. Mostly it is stated in the rental conditions that trips to Northern Cyprus and leaving the country by ferry are not allowed. Failure to comply can of course have unpleasant consequences, especially in the event of a breakdown or accident.

We did a lot of research and telephone work on this in advance and in the end we could NOT find a landlord in the Republic of Cyprus (south) who allows to drive to Northern Cyprus in his rental conditions. In addition, you will generally not find any offers for car rentals in Northern Cyprus on the well-known comparison portals such as cheap car rental, Sunnycars, Happycar or Holidaycars. This has mainly to do with the insurance cover that does not exist in this case. Although there is the possibility to take out special motor insurance for the northern and southern parts of the island for his vehicle at the border crossings, the car rental companies still do not allow this. If you risk a crossing, there is a risk that you will not get any help from the car rental companies if you have a breakdown in the north with the car. Then it’s up to you to make sure you take your car back to the south.

Car rental companies in Northern Cyprus are also closing a border crossing – except for one provider: Oscar Rent a Car

We have abolished the borders. If you want to see the whole island with your rented car, Oscar Rent a Car is the place for you. We are the only company in Northern Cyprus that allows you to go to the southern part.

Of course, this sounded perfect for us. We chose a group 3 automatic rental car and received a Nissan Note that was very spacious. This was brought to our Hotel Salamis Bay Conti free of charge at the agreed time, as you can only receive Oscar Rent A Car rental cars in the northern part. For this reason, we booked a transfer via Oscar Rent a Car from Larnaca Airport (south) to our Hotel Salamis Bay Conti in the north for 70 Euros.

By rental car across the border in Cyprus

We contacted Oscar Rent a Car again about crossing the border by car and asked for the exact procedure. Then we got the following description:

If you would like to go to South Cyprus you should tell us in advance so that we can give you the logbook for the car and also make a special mark on your rental agreement – saying that we allow you to cross the border with our car. It is free of charge on our side, however, you will need to purchase additional insurance to cover the car on the Southern Side which is a different country (the insurance provided by our company is valid only on the territory of the Northern Cyprus). The cost is approximately 25-30 EUR. Without this additional insurance you cannot cross the border. The insurance is issued by Insurance Office at Metehan Border in Nicosia. The working hours are: Monday – Friday, 08:00 – 14:00, excluding public holidays. After you have gotten this insurance you are free to cross the border at any time and any crossing points. Just the first time has to be at Metehan during the working hours of the Insurance Office.

And that’s how it worked. When filling out our local rental contract, it was noted in writing on the contract that the car rental company allows us to drive to Southern Cyprus. In addition, we have received a 2nd form for presentation at the border for the insurance.

At the border crossing Metehan (Agios Dometios) in Nicosia we left Northern Cyprus on presentation of our documents and passports, then arrived in the southern part and had to buy the additional insurance in one of the adjacent insurance houses for 25 €. 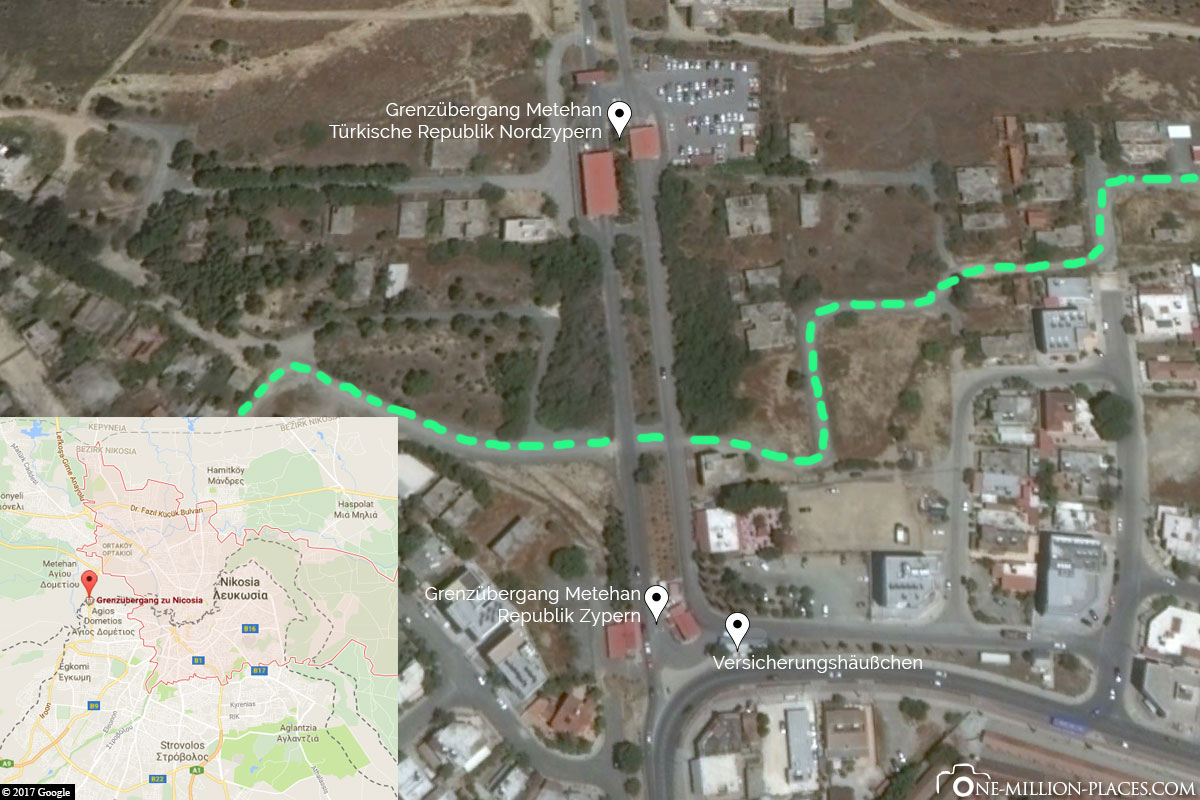 From now on we could travel at all border stations without any problems by car from the north to the south and vice versa. The overview of all border crossings in Cyprus can be found here: Interesting facts about Cyprus

The delivery of our Oscar Rent a Car rental car was just as easy: we could just leave our car somewhere in the parking lot of our second hotel – the Acapulco Resort near Kyrenia – and hand over the keys at the reception. For the trip to Larnaca airport, we had organized a private taxi, also via Oscar Rent A Car, which cost 60 euros.

In total, we drove almost 1,200 kilometers across the whole island and saw a lot. In the next articles we will show you our impressions of Cyprus.

Interactive map of Cyprus with all the sights

In Google MyMaps we have put together a map and entered all important points (sights, border crossings, our hotels). Perhaps this will help some people in their holiday planning a little further 🙂