Athens is certainly one of the most historically important cities in the world with an incredibly long and varied history. All the more we were pleased to explore the city with all its ancient buildings and Tourist Attractions on a beautiful day in June on our own 🙂

Things to know about Athens

– Athens is the capital of Greece and is the most populous and largest city in the country
– The city has about 660,000 inhabitants, while the conurbation has more than 4 million
– Athens is considered one of the oldest settlements and cities in Europe
– The rivers Ilisos and Kifisos flow through the city
– The city is surrounded by several mountain ranges, such as Hymettos (1,026 m), Pentelikon (1,107 m) and Parnitha (1,413 m)
– Southwest, the city opens to the sea, the Saronic Gulf
– The first Olympic Games of the modern era were held in Athens in 1896
– Athens is considered the birthplace of democracy, Western philosophy and literature, as well as basic mathematical principles
– The most important personalities of the city are Socrates, Alexander the Great, Aristotle, Pericles and Plato
– Athens was named Europe’s first European Capital of Culture in 1985

The sights of Athens

She has been on our bucket list for a long time and we have been looking forward to the moment when we would finally see it: The Acropolis. The Acropolis is actually the castle hill, which belongs to an ancient Greek city. The Athens Acropolis is probably the best known example of an acropolis, which is why the entire terrain is often referred to only as “The Acropolis” for simplicity. The Acropolis has dominated the cityscape of Athens for about 3,000 years and has been a UNESCO World Heritage Sitesince 1986. We have collected all important information about the Acropolis in a separate article.

The Plaka district is located below the Acropolis in a northeasterly direction. The best way to reach the district is within walking distance of the two metro stations Akropolis and Monastiraki. A walk through Plaka is worthwhile: the many cobbled streets, small souvenir shops, cosy street cafés and tavernas give the district a village character. The most famous sights of the district are the Tower of the Winds and the Lysikrates Monument. You should also visit the adjacent anafiotika district – here you will find whitewashed houses and feel as if you are on the Road in the Cyclades.

Monastiraki Square is the heart of the district of the same name. In addition to shops, flea markets, fruit and vegetable stalls and many restaurants, the area also has an ancient site, Hadrian’s Library.

Tip: From the Rooftop Bar of the Hotel A for Athens you should have a fantastic view of Monastiraki Square and the Acropolis Mountain.

The Agora of Athens

The ancient Agora of Athens was a meeting place and thus the heart of ancient Athens – here the economic and social life of the city pulsated: trade was held, democratic elections were held, plays were performed, military parades were held and sports competitions were held. Around the square were the important government and administrative buildings of the city. We liked the extensive grounds of the Hephaistos Temple and the Hellenistic Hall of Change.

The Little KooK Café and the Umbrella Alley

Athens can also be colorful and shrill. We wouldn’t have thought of the ancient city before, but a visit to the Psyrri district showed the opposite. Here you will find the Café Little KooK, which is a real feast for the eyes. We had to stand in front of the building for 5 minutes to let the overstimulation affect us. The building is totally insanely decorated: artificial flowers, life-size figures, a sign forest and above a huge Mary Poppins sign. Pure kitsch, but somehow totally cool. Together with the Umbrella Lane, which leaves across from the café, this is a really great place and a great photo motif. We certainly spent 30 to 40 minutes here and the best thing was that there was almost no one here. Apparently, this is more of an insider tip! 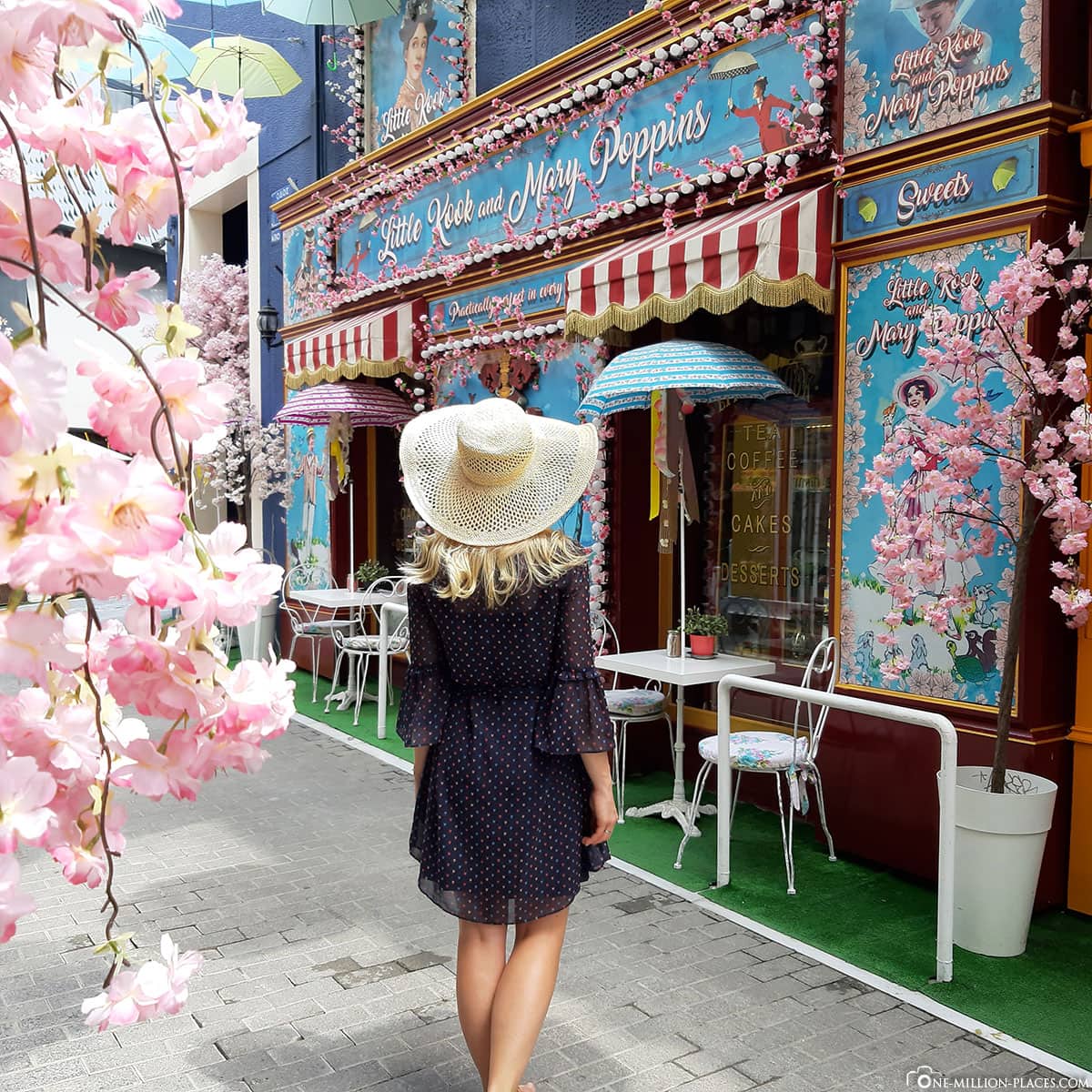 The changing of the guard at Parliament

Syntagma Square is home to the Greek Parliament, which is housed in the old royal castle. Here there is a change of guard every hour the Evzones in front of the Tomb of the Unknown Soldier. Evzones are soldiers of the former Royal Greek Bodyguard. We have to admit that we imagined the change of guard a little more spectacularly. The change itself is done within 20 seconds – there is no proper ceremony, no march or the like. However, every Sunday at 11 am there is a larger parade with music. So we only saw the mini-variant of changing the guard.

Our tip: It is best to be there 15 minutes in advance, so that you can get a standing place in the front row.

Behind the parliament stretches the National Garden, a really green oasis with palm trees, ponds and a small animal enclosure. The former castle garden was left to the city for free use for 90 years in 2004. The voluntary care of the gardens is taken over by an association.

The Temple of Olympic Zeus (Olympieion)

About 500 meters east of the Acropolis is the Olympieion or the Temple of Olympic Zeus, one of the largest temples in ancient Greece. The construction of the temple began in the 6th century BC, but was only completed thanks to Emperor Hadrian in the 2nd century AD. You don’t necessarily have to go into the site, but you can also look at the Olympieion very well from Hadrian’s Gate. However, if you already have a combined ticket to the ancient sites of Athens, don’t miss a visit.

The Olympic Stadium of the first Modern Olympic Games was built in 1896 as a reconstruction on the foundations of the ancient stadium. In the stands there is room for about 60,000 spectators. Today, the Panathinaiko Stadium is only used for very few events, as it is unfortunately subject to many restrictions. Since 1982, however, it has been the goal of the annual marathon, in which the runners conquer the legendary Marathon-Athens circuit.

Our tip: Even if it is exhausting, it is worth walking to the top of the last row of spectators and looking at the stadium from this point of view.

The Athens Trilogy is an ensemble of three beautiful neoclassical buildings,all of which provide great photo motifs: the Greek National Library, the Athens Academy and the University of Athens. All 3 buildings are located on Odos Panepistimiou, a 1.2-kilometre boulevard. A cross street further on is another beautiful building: the National Historical Museum, in front of which is a statue of Theodoros Kolokotronis, a Greek freedom fighter.

The Market Hall in Athens

If you love a bustling market visit, don’t miss the Athens Market Hall. Especially in the morning hours there is a lot of activity here. From fresh fish and meat to spices and nuts to fruits and vegetables, you will find all sorts of goodies here.

The view from the city mountain Lykavittos

After we had already admired the Acropolis up close, we really wanted to find a beautiful viewpoint from which one has a view of the city. The city mountain of Athens, the Lykavittos (also called Lykabettus), is a great place to be. You can either reach the mountain on foot or, like us, take the funicular to the top. At 277 meters, the mountain is the highest peak in the city center and offers a breathtaking view of the metropolis. Since we had very good visibility, we could even see the port of Piraeus from a distance.

View from the city mountain Lykavittos over Athens

In addition to the already mentioned sights, the city has much more to offer. The best way to drive through the streets is to discover the most beautiful corners of the city.

A map with all the sights of Athens

In this map we have entered all the sights of Athens:

Athens has several Starbucks stores and also its own cup 🙂

The Starbucks City Cup of Athens