Over an extended Pentecost weekend, we wanted to take a closer look at the UNESCO World Heritage city of Prague.

The city of Prague

The “Golden City” on the Vltava River is the capital and with 1.2 million inhabitants at the same time the most populous city of the Czech Republic. Prague has been largely spared the devastation of World War II and offers many well-known sights such as Prague Castle with St Vitus Cathedral, Charles Bridge, atomic clock, the oldest active synagogue in the world. The historic centre of Prague is recognized by UNESCO as one of the 12 World Heritage Sites in the Czech Republic and today shows a closed, Gothic and Baroque cityscape. With more than five million foreign tourists a year, Prague is one of the ten most visited cities in Europe.

Our hotel in Prague

We stayed at the Hotel Occidental Praha Five (formerly Barcela Praha Five), which is a few minutes’ walk from the nearest metro and tram station.

The hotel is very modern. The rooms are spacious and clean; we even had a balcony overlooking the city. The location of the hotel is great. Public transport is within walking distance. A shopping center incl. Supermarket is also nearby. The staff at the reception were very nice and helpful. We had placed our car in the hotel’s underground car park. That was also a good thing, because the next morning the windows of a car parked (unguarded) directly in front of the hotel entrance. We highly recommend the hotel and would stay here again on your next visit to Prague.

The sights in Prague

A lot of things can be explored in the city on foot or with one of the many trams. Luckily we had really nice weather over Pentecost, so the sightseeing was twice as much fun.

On Mount Hradschin lies the Prague Castle, which was founded in the 9th century and forms the largest enclosed castle area in the world. Today it is the residence of the President of the Czech Republic. It can be reached from the “Prague Lesser Town” district via the Old Castle Steps, the New Castle Steps and The Nerudagasse. The complex of the castle includes many different buildings, grouped around three castle courtyards, Georgsplatz and Georgigasse. In the innermost courtyard is the Gothic St. Vitus Cathedral with the Royal Tomb. The main tower, which rises about a hundred metres in height, can be climbed in summer. We didn’t want to miss this, because from above you have a magnificent view over Prague. The ascent is highly recommended. Around the castle are the gardens of Prague Castle, which invite you to take a walk in fine weather.

The Charles Bridge over the Vltava River

On the way back to the city through the district “Little Side” there is a lot to see… Shops, narrow streets, restaurant, horse-drawn carriages and much more until you reach Charles Bridge. It connects the old town with the Lesser Town. At both ends of the bridge there are striking bridge towers, which form the entrance to the Charles Bridge. On the bridge itself, artists and small stalls line up next to about 30 bridge statues.

The Old Town of Prague

Prague’s Old Town is particularly marked by its old houses, numerous churches and romantic alleys. The central square is the Old Town Square, the 9,000 m2 market square in Prague’s Old Town. The historic town hall with the astronomical apostle clock, the Teyn Church, the Hussite Church of St. Niklas, the Palais Kinska, the house “Zur Steinernen Glocke” and other buildings worth seeing surround the square. On the market square you could smell a buttrig-sweet scent at many stalls. The rolled rolls of dough are called Trdeln’k and are always freshly prepared. A piece of yeast dough, about the size of a bun, is turned into a long strand and twisted around the hot, buttered wooden or metal rod. The dough is evenly browned over hot coals and finally, when the dough is still hot, rolled in a sugar mixture with cinnamon. Very tasty 🙂

The National Museum in Prague is the leading museum in the Czech Republic on cultural and natural history. It has numerous collections, exhibition buildings and also historically significant buildings.

Wenceslas Square in Prague’s New Town has a width of about 60 m, which corresponds to a boulevard rather than a square. With a length of about 750 m, it is today one of the largest urban squares in Europe.

Another beautiful sight is the Pecan Lookout Tower, which is located on a 318-metre-high hill in the Lesser Town district and is a bit reminiscent of a reduced version of the Eiffel Tower in Paris. You can walk through a park or take the Peton funicular within a few minutes. From above you have a comprehensive view of Prague and the surrounding area.

Prague has several Starbucks stores and also its own cup 🙂

The Starbucks City Cup of Prague 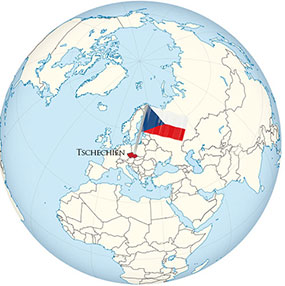