From Traben-Trarbach we made a day trip to Bernkastel-Kues, where we first looked at the city with all its sights and in the afternoon we took an alpaca hike in the surroundings.

Things to know about Bernkastel-Kues

The town of Bernkastel-Kues with its 7,000 inhabitants is located directly on the Moselle about 50 km from Trier (location in Google Maps) and is a state-recognized spa. In terms of area, it is one of the largest cities in the Middle Moselle. The “International City of Vine and Wine” consists of a total of 4 districts – 2 to the left of the Moselle (Wehlen, Kues) and 2 to the right of the Moselle (Bernkastel, Andes) – as well as the district of Kueser Plateau.

There are many reasons to visit the city of Bernkastel-Kues: Romantic alleys, rustic half-timbered houses, cosy wine bars and wine cellars as well as countless restaurants and cafés. Popular are the numerous jetties of the city, of which several daily tours of the Moselle are offered and regularly stop Rhine-Mosel river cruise ships. In addition to tourism, viticulture is an important economic activity here, as in many places on the Moselle. In particular Riesling, but also small quantities of other grape varieties are cultivated here on 5,844 ha mainly in steep areas.

Tourist Attractions & Things to do in Bernkastel-Kues

We parked our car on the Kueser side in a parking garage and walked over the bridge into the old town.

On the way we passed the white-red St. Nikolaus-Hospital (Cusanusstift), which is idyllically located directly on the banks of the Moselle. In 1458, the late Gothic monastery was founded by the cardinal and bishop of Brixen Nikolaus von Kues as a poor hospital for single men. From the end of the 1960s, women were also allowed to be admitted to the nursing home. To this day, the monastery houses a nursing home. Opposite the St. Nicholas Hospital is the traditional “Hotel Drei Könige”.

If you continue over the bridge, you already have a beautiful view of the Bernkasteler Moselleufer, where the Catholic parish church of St. Michael with its imposing bell tower catches the eye. Our walk took us further over Karlovy Vary Square and the square at the Bärenbrunnen towards the old town. We particularly liked the numerous cobbled streets here. Everywhere people sat in restaurants and cafes and enjoyed the beautiful sunny weather.

The highlight of the old town is the medieval market square with its gabled half-timbered houses from the 17th century and the Michaelsbrunnen. We really liked the place with its well-preserved houses and the Renaissance town hall. Also the narrow pointed house from 1416 is an absolute feast for the eyes, but unfortunately it was half equipped during our visit, so you could not see much of it. In order to enjoy the atmosphere on the market square a little longer, we got a delicious ice cream at the ice cream café Bressanone and watched the action from the Michaelsbrunnen. 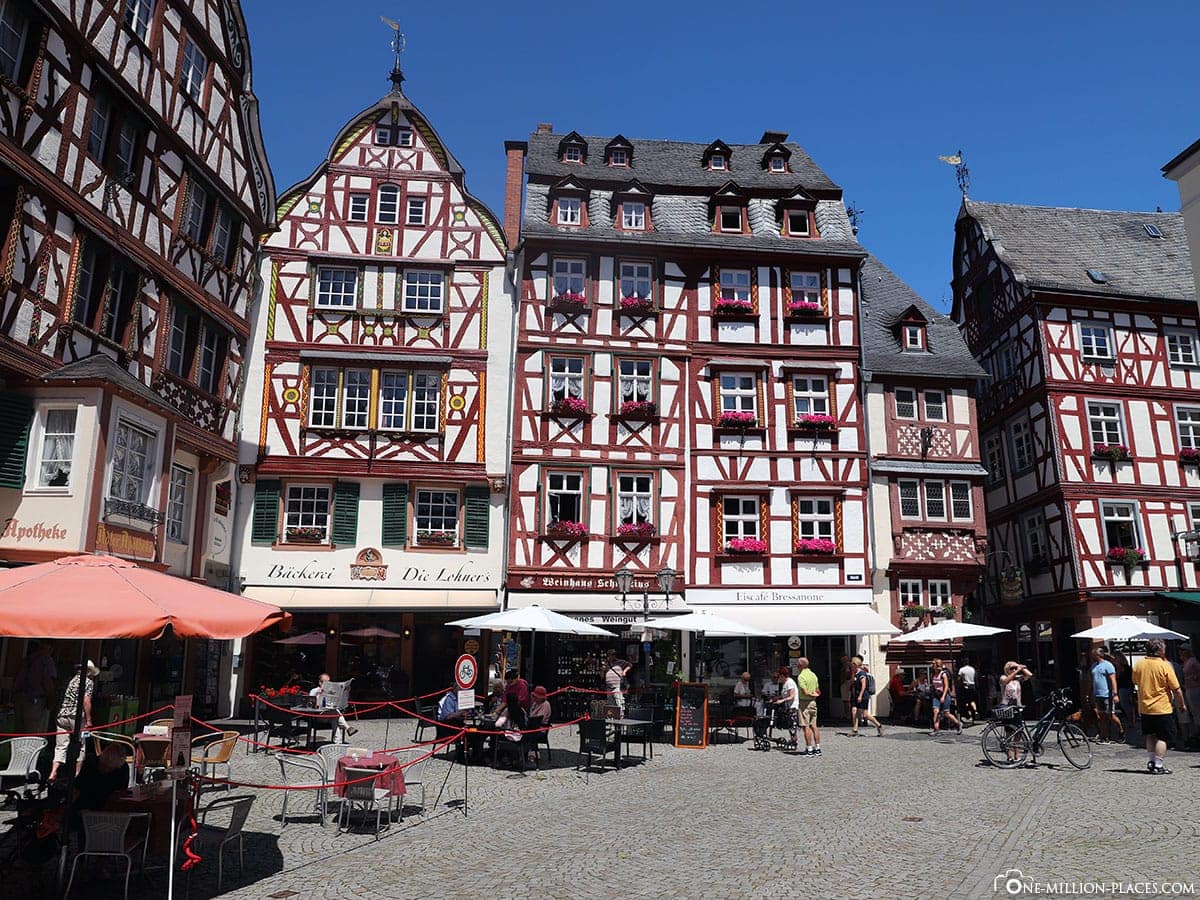 The medieval market square in Bernkastel-Kues

A walk through the old town

Afterwards we walked even further through the small alleys of Bernkastel-Kues and let the city work on us. For example, we also passed the only surviving city gate, the Graacher Tor, which was built around 1300 and has been used as a local museum since 1985.

Our last port of call was the ruins of Landshut Castle, which towers over the old town on the 235 m high castle hill. This can be reached either by a hike from the city or easily by car. Due to time constraints, we chose the auto variant. There is a free car park at the top, from which you can reach the castle within a 5-minute walk. The present castle was built at the end of the 13th century on the foundations of a Roman fortification by a Trier archbishop. In 1692 it was destroyed by an unfortunate fire and has not been rebuilt to this day.

We particularly liked the location of the castle in the middle of vineyards and the great views over the Moselle valley. 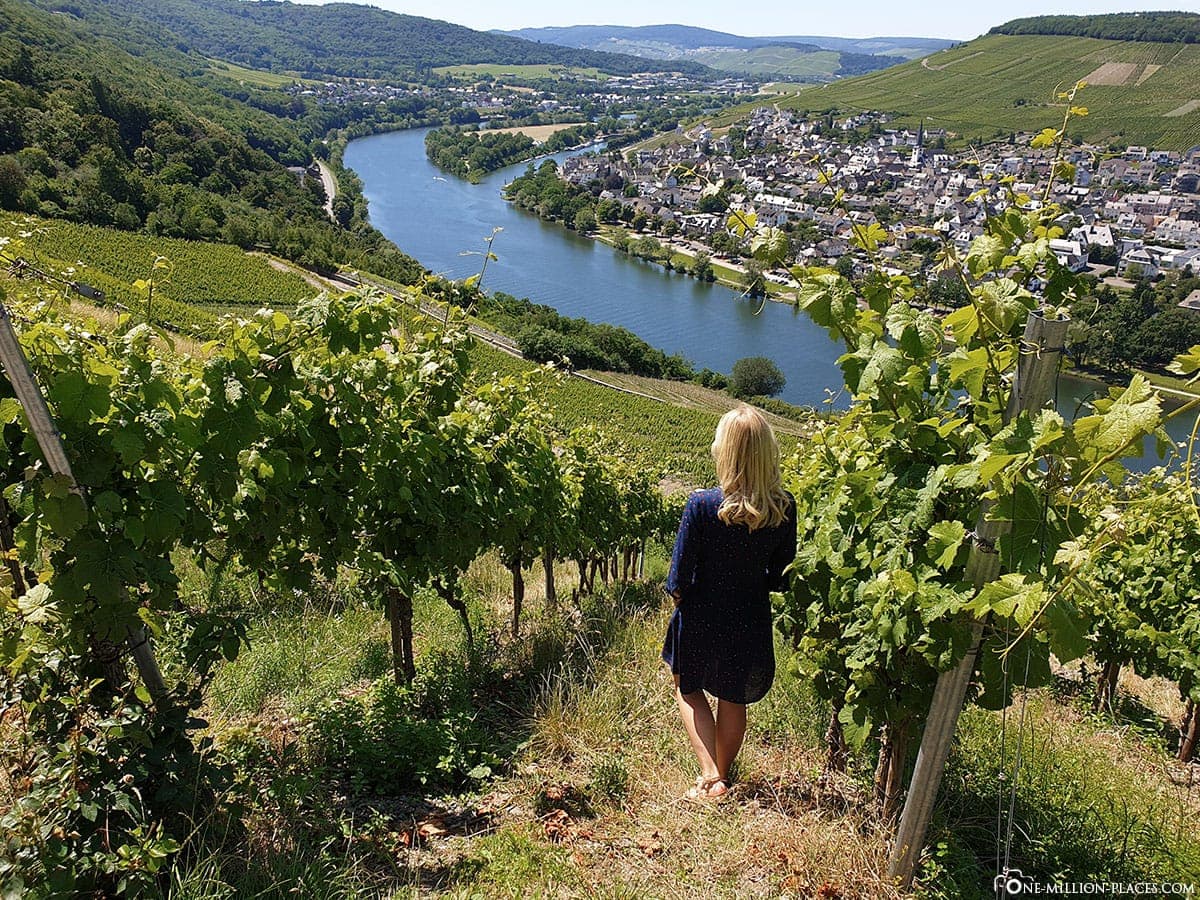 View from the vineyards over the Moselle Valley

The Cistercian monastery of Machern

Just outside Bernkastel-Kues, near the district of Wehlen, lies the former Cistercian monastery of Machern, which today has a winery, a monastery brewery, a toy and icon museum and a restaurant. In the monastery park there is also a small herb garden, which you should definitely look at. Here you can find currant and barbed berry shrubs from various mint varieties to countless kitchen herbs.

By the way, the Cistercian monastery of Machern also has a particularly good view of the newly created Hochmosel Bridge, which has been crossing the deeply cut Moselle valley since November 2019.