After our trip in the morning to the ruins of Delos we took the ferry back to Mykonos town and were able to explore the small town on our own.

The island of Mykonos

The island of Mykonos is an excellent example of the great Cycladic architecture. The largest town on the island is Mykonos town (also known as Chora). It is home to about two thirds of the 10,000 inhabitants of Mykonos and the city is certainly considered one of the most beautiful places of the Cyclades. In the small alleys you will find the traditional architecture everywhere with the snow-white cube-shaped houses and their mostly blue shutters, which together with the flowering climbing plants, such as the tripletflower, produce incredibly beautiful photo motifs. In the cobbled streets you will find small restaurants, sweet cafés, shops for shopping and a variety of picturesque churches and chapels. The whole place is practically a single sight and there is always something new to discover. 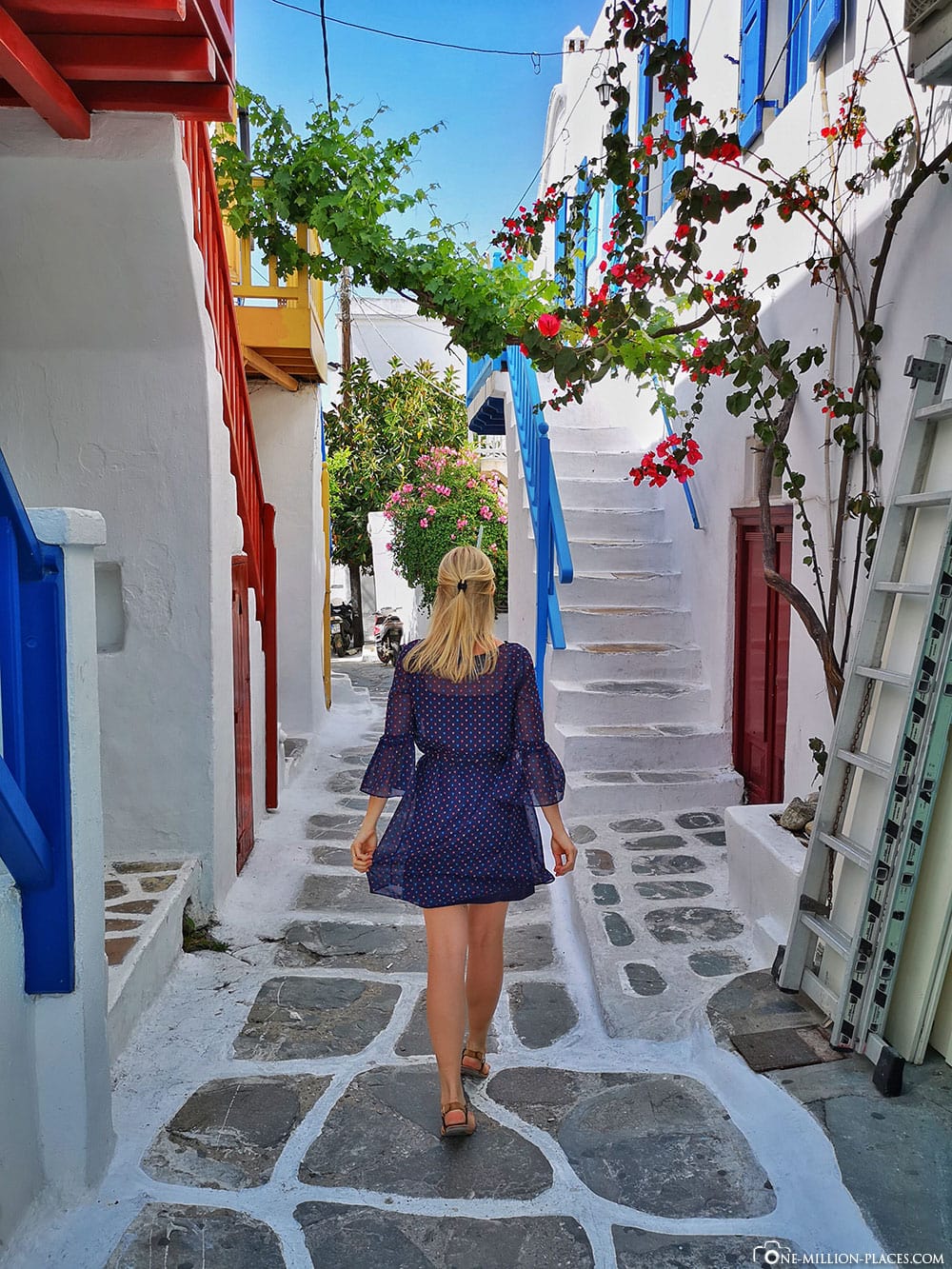 The fairytale alleys of Mykonos

The fairytale alleys of Mykonos Town

We enjoyed it insanely much, strolling through the whitewashed, winding alleys, past churches with the typical blue domes. Together with the bougainvillea flowers, usually colored in pink or red as a triplets flower, which exude a southern flair in front of the white house walls, the city has given an insanely beautiful picture. We didn’t want to leave here!

One of the buildings to be looked at in the city is the 15th-century paraportiani church,which is only a few minutes from the old port. The church complex consists of four originally independent white chapels and the main church, which over time have grown into a complex with a very asymmetrical facade. Since the church is at risk of collapse, visitors cannot visit it from the inside. 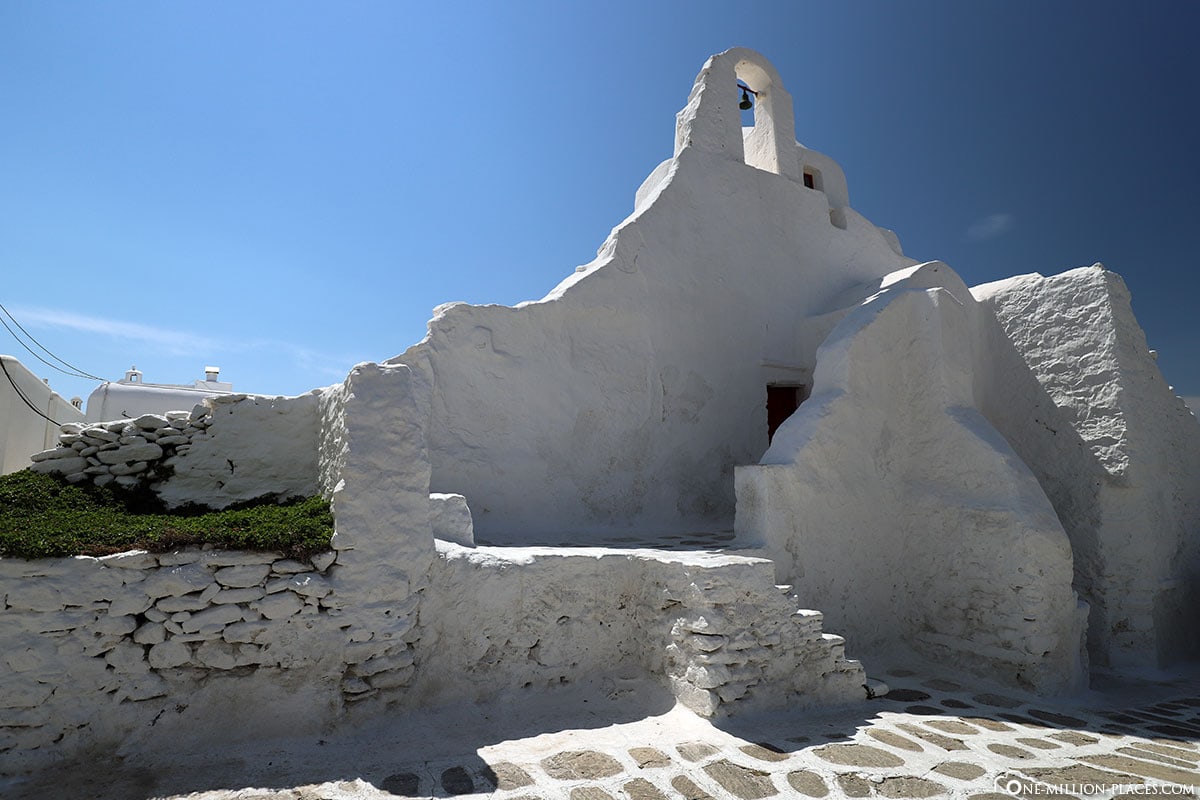 The Church of Paraportiani

The church of Paraportiani is located in the middle of the Klein-Venicedistrict, which is also very well known and attracts many tourists. The name of the district is reminiscent of the former rule of the Venetians. The most photographed motif in the district is the white row of houses with their colourful balconies right on the shore. Countless restaurants and bars can be found here, where tourists can gather all day long and enjoy the view of the crystal clear sea. 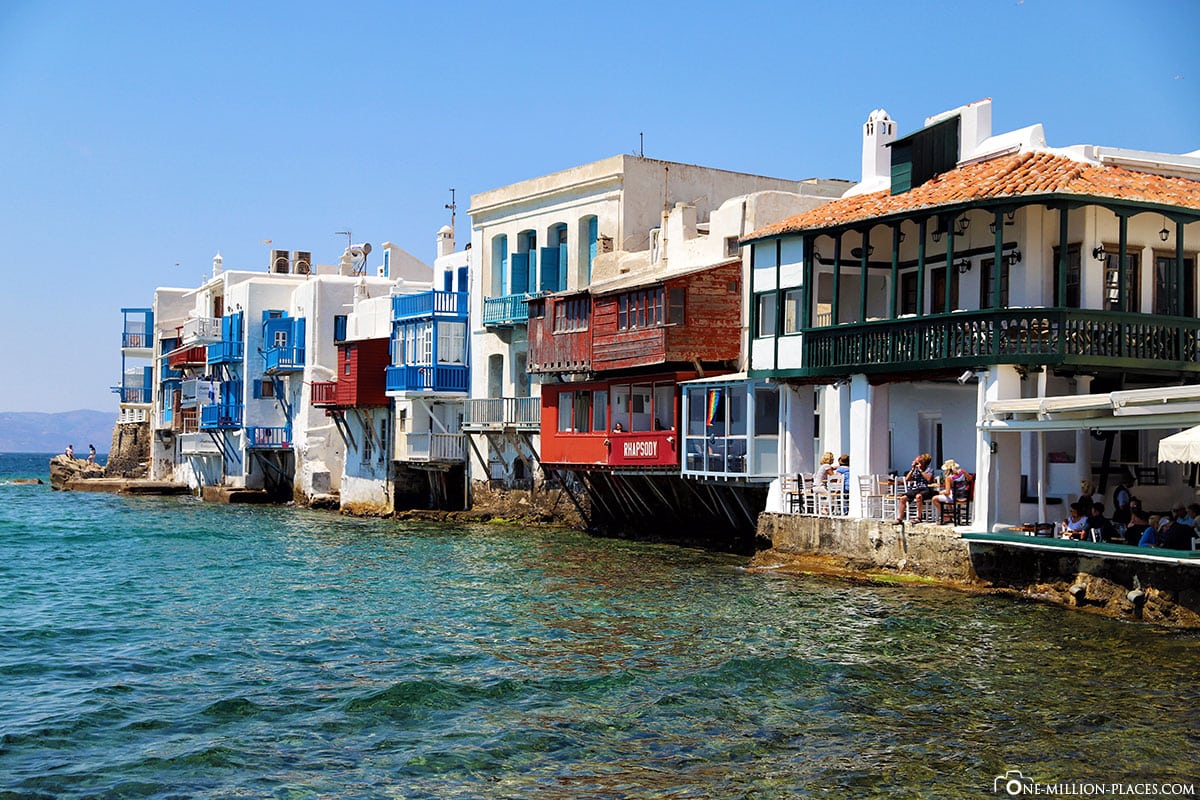 The Little Venice district in Mykonos

THE landmark of the island, however, are the five white windmills Kato Mili, which can be found on a hill on the edge of the centre. 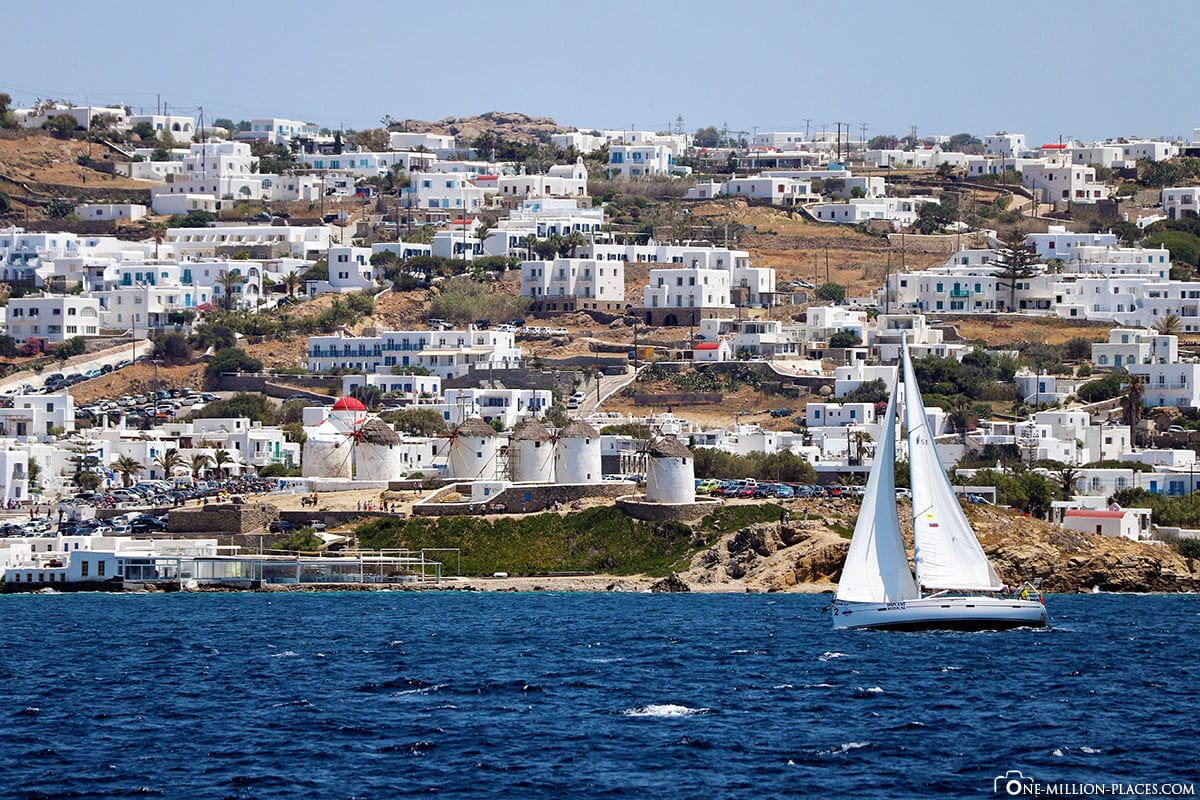 The location of the windmills on Mykonos

In the past, a total of ten mills grinded the grain from all over the area. Today, the five remaining mills are no longer functional and are privately owned. One of the windmills was damaged a few months ago when a stormy wind swept across the island. From up here you have a beautiful view of Little Venice and the rest of the city.

The windmills really give off a great photo motif. We stayed here for about 1.5 hours, took countless photos, but also just sat down and enjoyed the view. We also enjoyed the sunset at the windmills, which was a beautiful sight. 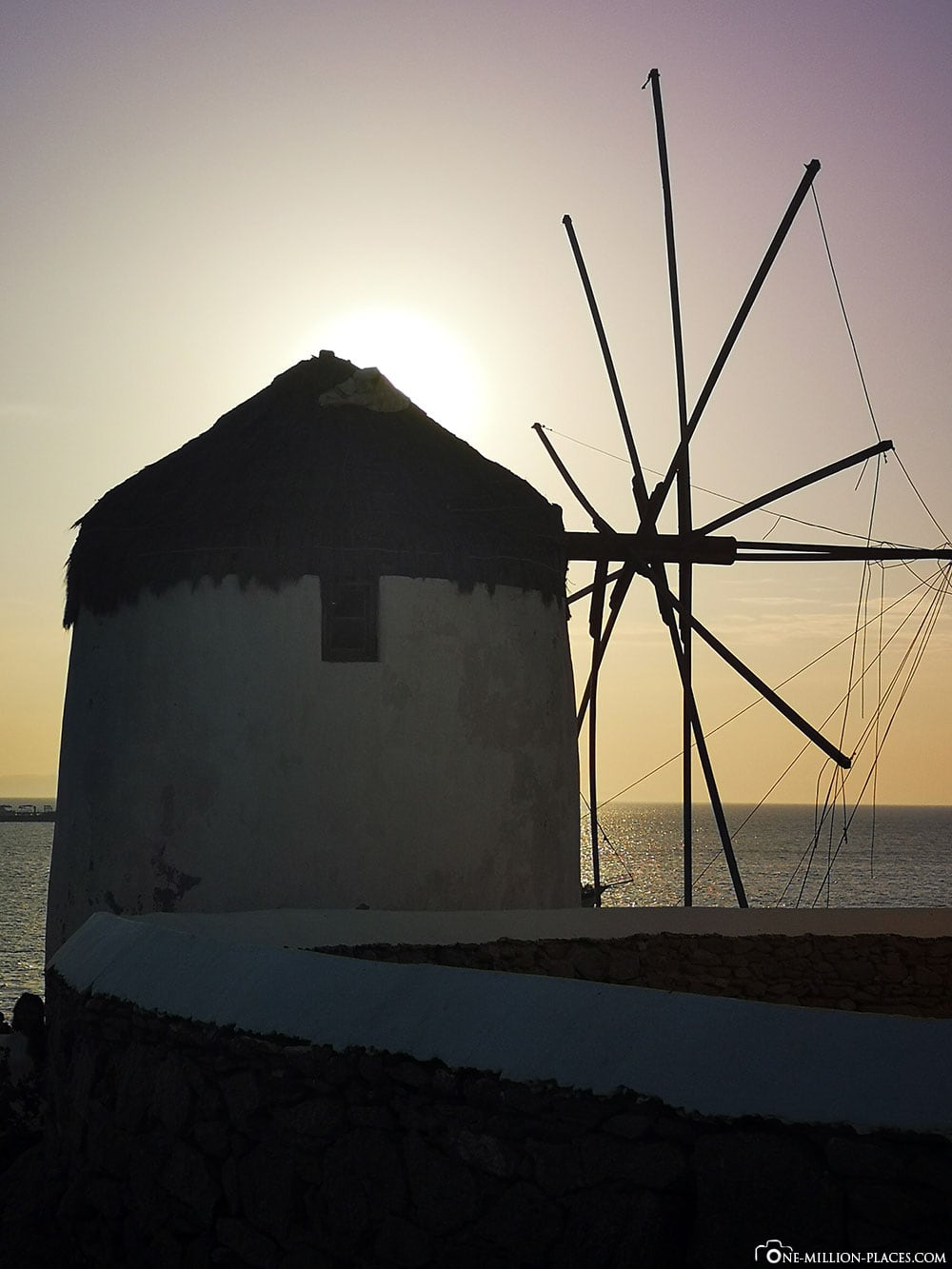 Windmill on Mykonos at sunset

At dusk we walked again through the small alleys, which were by now much emptyer than in the morning. During the day there was a lot of activity in the city and countless tourists were on the way. With us, three or four other cruise ships had stopped at Mykonos. Since the majority of the visitor groups only look at Mykonos city including the island of Delos, the crowds of visitors are concentrated in the city. Such an island has to cope with this first. The other ships have already departed earlier, so that we could enjoy the evening atmosphere very relaxed and without crowds. Our ship was not supposed to leave until midnight.

At 8 p.m. we had an appointment with the rest of our blogger tour group at the Roca Cookery restaurant. We had a great place on the terrace including views of the bay of Mykonos town. It was beautiful. The served food was typical Greek, there was fresh fish and delicious wine. A nice end to an eventful day on a great island.

Around 11 p.m. we went back to the ship. Our excursion today made us very curious about the rest of the island. We would have liked to see more of the island, but unfortunately the time was not enough. Then we will probably have to come here again 🙂

What to see in Mykonos in Google Maps

Here we have again marked the most important sights of Mykonos city in Google Maps:

From Mykonos there is a cup with the beautiful motif of “Little Italy”.

The Starbucks Island Cup of Mykonos