Today was the last stop of our 7-day celestyal cruise through the Aegean Sea. On this last day you had the opportunity to choose between 2 destinations: on the one hand, you can explore the Greek island of Samos, where the ship arrives in the early morning. Or you can stay on board to continue to Kusadasi in Turkey after a short stop on Samos. On the way back in the evening, the guests who stayed on Samos are picked up again. We had decided to continue to Kusadasi and visit the UNESCO World Heritage Site of Ephesus.

The coastal town of Kusadasi

Kusadasi is a coastal town on the Turkish Aegean coast, which has about 100,000 inhabitants and is a popular destination for domestic and foreign tourists. In the past, many other cruise ships (including AIDA) stopped here, but due to the political situation, there are now – besides Celestyal Cruises – only two others (NCL and Royal Caribbean). The city is not necessarily a masterpiece from an architectural point of view. But what is really nice is a colorful row of houses,which is located high up on the mountainside and we really liked it. 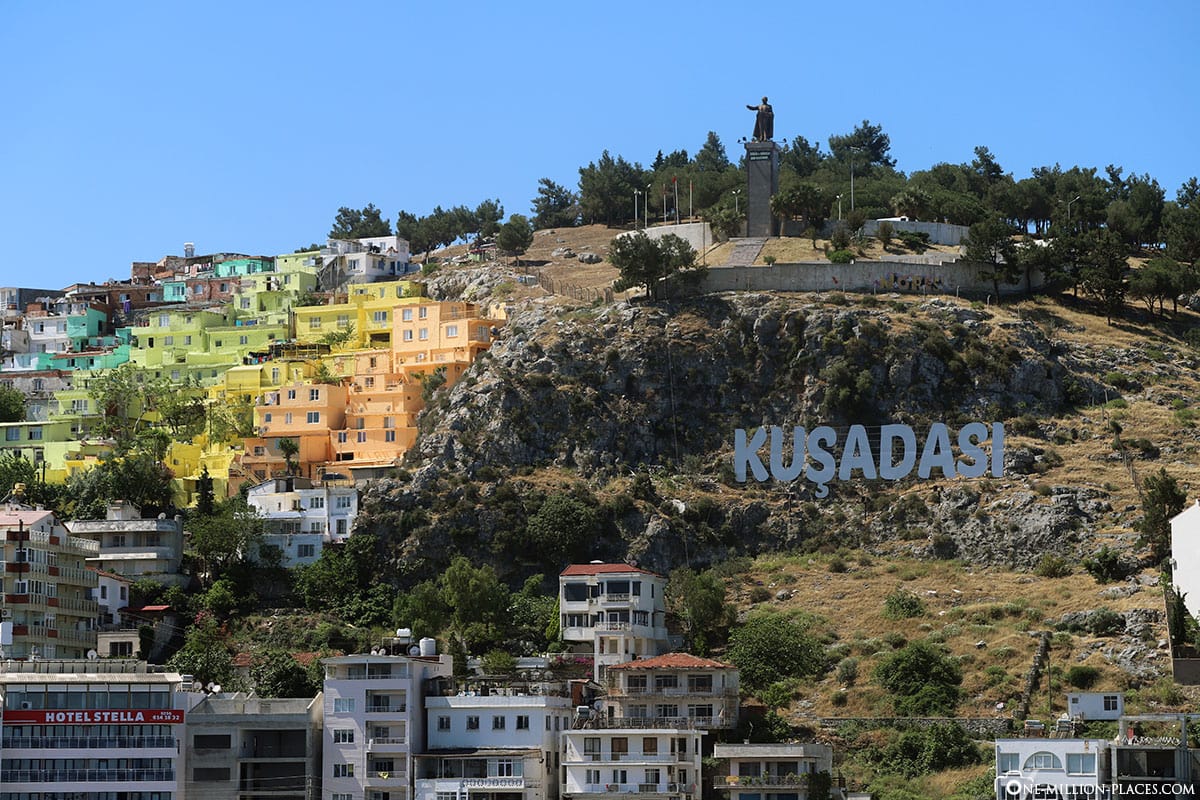 View of the coastal town of Kusadasi

In front of the town is a small island – the so-called “Pigeon Island“, which can be reached via a footpath. The island used to be a military base, later a castle and now a place of peace and relaxation with cafes. In addition, there is a promenade with numerous cafés and restaurants, which we walked along just before the ship left.

The history of the Ephesus World Heritage Site

Today, of course, the focus was not on the city of Kusadasi, but with Ephesus, one of the largest and most visited ruins in the world. With our coach and our 8-person tour group we drove from the port in Kusadasi about 30 minutes to the excavation site. At the main entrance of Ephesus you will find countless souvenir shops. If you go directly into the site, you have your peace and quiet. Our tour guide told us a lot about the story during a walk through the complex. Often we had to push ourselves through other tour groups or push past, because Ephesus was very crowded on the day – perhaps because it was also Saturday and all coaches arrived almost simultaneously.

Ephesus used to be an ancient Greek city, which was located directly on the coast at that time. Due to climatic and seismic changes, however, the coastline shifted over time, so that the ruin site is now several kilometers inland near the city of Seluk. The first traces of settlement date back to the 5th century BC, but it was only later that urban structures developed here. In the 10th century BC, Ephesus was built on the site of the former capital Arzawan by Attic and Ionian Greek colonists. After the city came under the control of the Roman Republic in 129 BC, it flourished in the following years and reached the 250,000 inhabitants mark. However, Ephesus was destroyed and plundered by the Goths in 263 AD. And although it was rebuilt, it lost its importance as a trading center as the port slowly sank through the river. A later earthquake around 614 A.D. partially destroyed the city, it fell into disrepair and became increasingly forgotten.

The first archaeological excavations in Ephesus took place only in the middle of the 19th century. The British architect and engineer John Turtle Wood went in search of the legendary Temple of Artemis, which is one of the seven wonders of the ancient world. In 1869 he discovered the sidewalk of the temple, but as no further discoveries were made, the excavations were stopped in 1874. In 1895, the German archaeologist Otto Benndorf resumed the excavations. He later founded the Austrian Archaeological Institute, which today plays a leading role in the excavations of Ephesus. Archaeologists have uncovered large areas of the city, as well as public buildings, residential buildings with murals and mosaics. In October 2016, Turkey stopped the archaeologists’ work, which has been going on for more than 100 years, due to tensions between Austria and Turkey. In May 2018, however, Turkey allowed Austrian archaeologists to resume their excavations.

The archaeological site of Ephesus was added to the list of UNESCO World Heritage Sites in 2015. 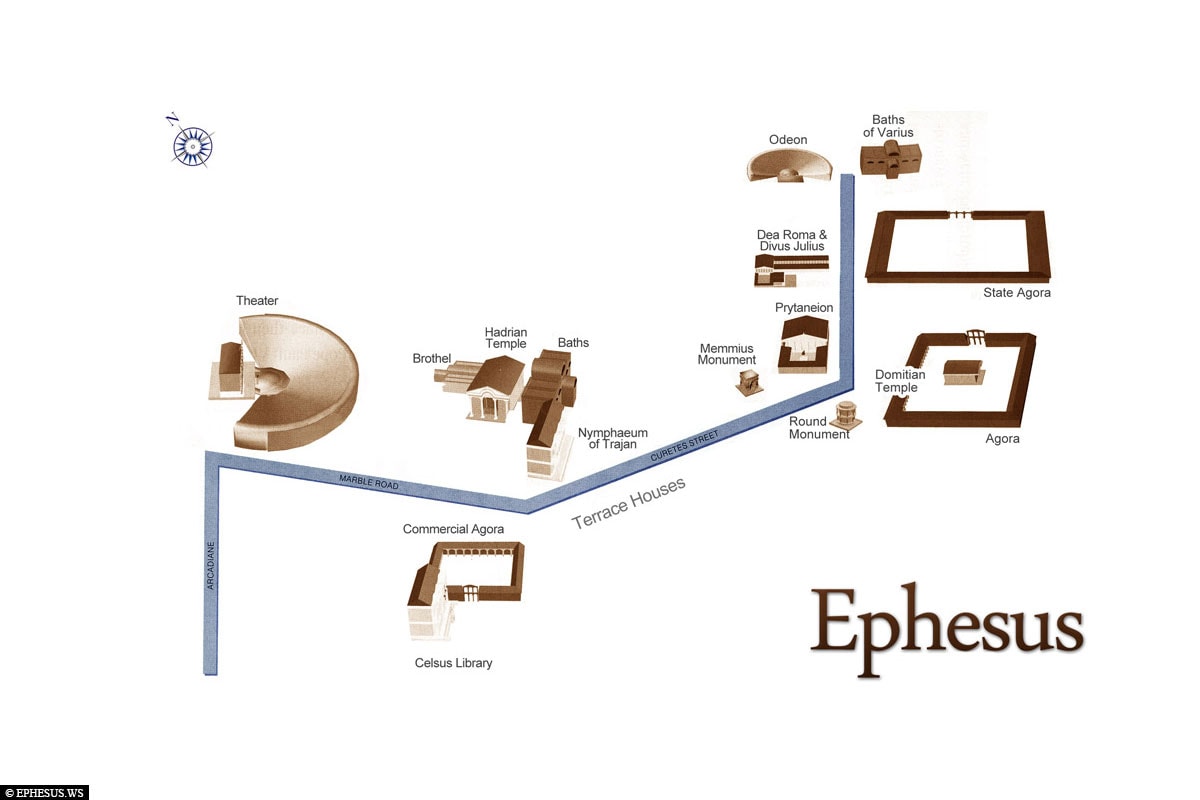 A map of the Ephesus Archaeological Site

The ruins of Ephesus

During our walk over the complex we visited the most important excavation sites or buildings. From the entrance of the Upper Town, one walks along the Kuretenstraße, a magnificent street with marble slabs to an ancient market square. In the upper town there is a small theatre, called Odeon, which was built in 150 Ad and had about 1,500 seats. Walking down Kuretenstraße, you will see many ancient ruins and statues on the right and left of the road, such as the Temple of Hadrian from the 2nd century, which was rebuilt from found fragments.

The Library of Celsus

Our personal highlight of the whole complex was the library of Celsus from 125 A.D., which was discovered in 1903 west of the ancient market square. The present facade was extensively reconstructed from original pieces between 1970 and 1978. It was built in memory of Tiberius Julius Celsus Polemaeanus, an ancient Greek. Celsus paid for the construction of the library with his own fortune and is buried in a sarcophagus underneath. The library once had nearly 12,000 scrolls. 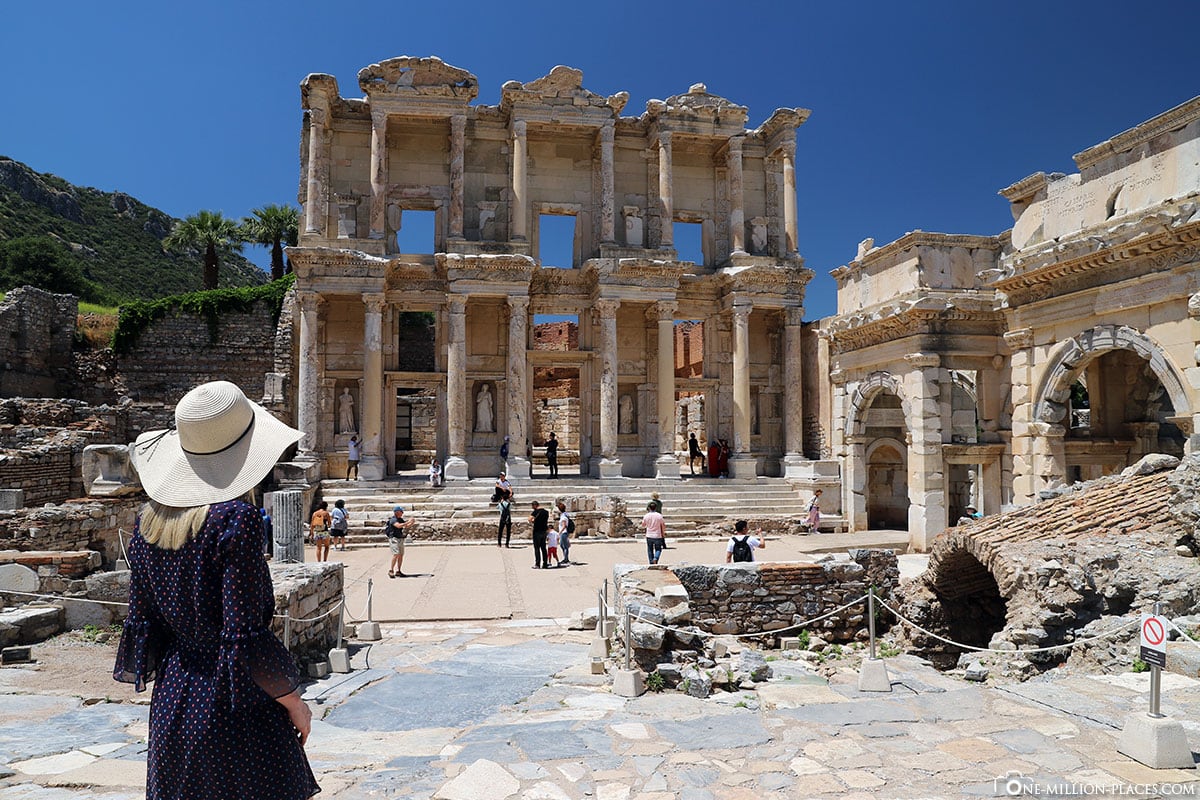 The Celsus Library in Ephesus

The Ancient Theatre of Ephesus

The ancient theatre of Ephesus, which once held about 25,000 spectators, is considered to be the largest theatre of antiquity. When you stand down in the middle and look up at the ranks, it is hard to imagine that an entire small town has fit in here. The open-air theatre was initially used for dramas, but in the later Roman period gladiatorial battles also took place on stage.

The exit of the site is a few meters after the amphitheatre. Outside the complex there are still remains of the temple of Artemis, which once consisted of more than 100 marble columns and was one of the seven wonders of the ancient world. Today, the temple is only represented by an inconspicuous column, which came to light during the excavations and is located on the outskirts of the city of Seluk. Unfortunately we did not visit this place on our tour.

After about 1.5 to 2 hours of historical tour through the ancient Ephesus, we went straight back to the ship – with a short detour over the promenade of Kusadasi. 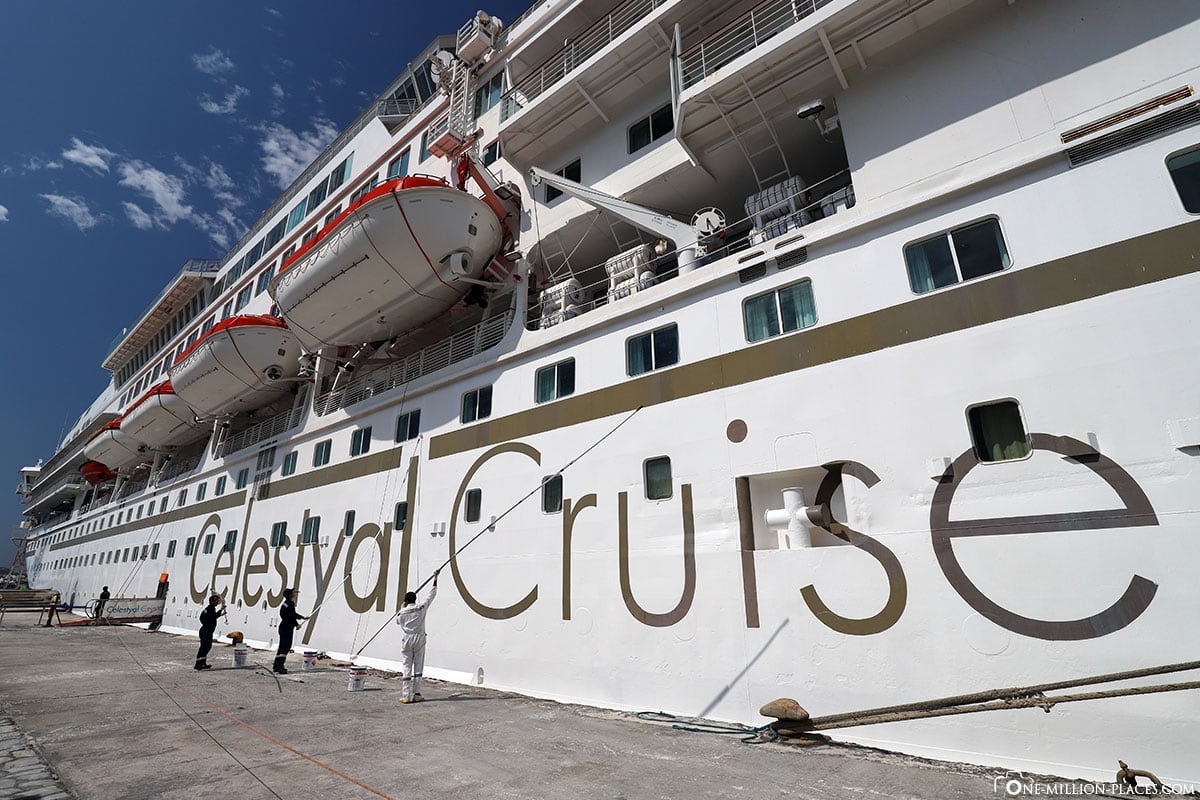 Our cruise ship from Celestyal Cruises 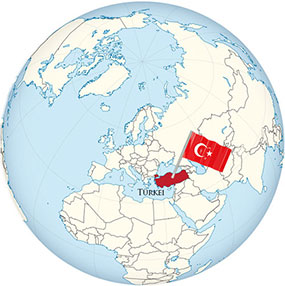