Our penultimate stop on the cruise with AIDAsol through Norway took us today to the small village of Eidfjord, which lies between the Hardangerfjord and the high mountains of Norway’s largest national park Hardangervidda.

The small Norwegian town of Eidfjord

Eidfjord is a small Norwegian town with about 1,000 inhabitants, located on the fjord of the same name.

The Eidfjord is an eastern arm of the Hardangerfjord, which is the second longest fjord in Norway after the Sognefjord. Eidfjord is located on Road 7, the Norwegian landscape route between Oslo and Bergen, which runs through the Hardanger region.

A very popular excursion destination in the area is the waterfall of Véringsfossen. With a drop height of 182 meters and a free fall of 145 meters, it is one of the most famous waterfalls in Norway. The largest employer in the city is the local Sima hydroelectric power station, which is one of the largest hydroelectric power plants in Europe. In addition, the region is one of the most important fruit-growing areas in Norway: due to the gentle climate, the fruit trees and bushes bloom here in spring like almost nowhere else in Norway.

To explore the area around Eidfjord a little more, we decided on the 9-hour AIDA excursion “EID05: Flams Railway, Bergen Railway and Waterfalls”. Since the excursion started only at 11 o’clock, we had a little time to walk through the small town and take some great pictures of the AIDAsol, which was really perfect here without disturbing fences in the harbour.

Here we also tried a “picture-in-picture”. It’s not so easy to get that 🙂 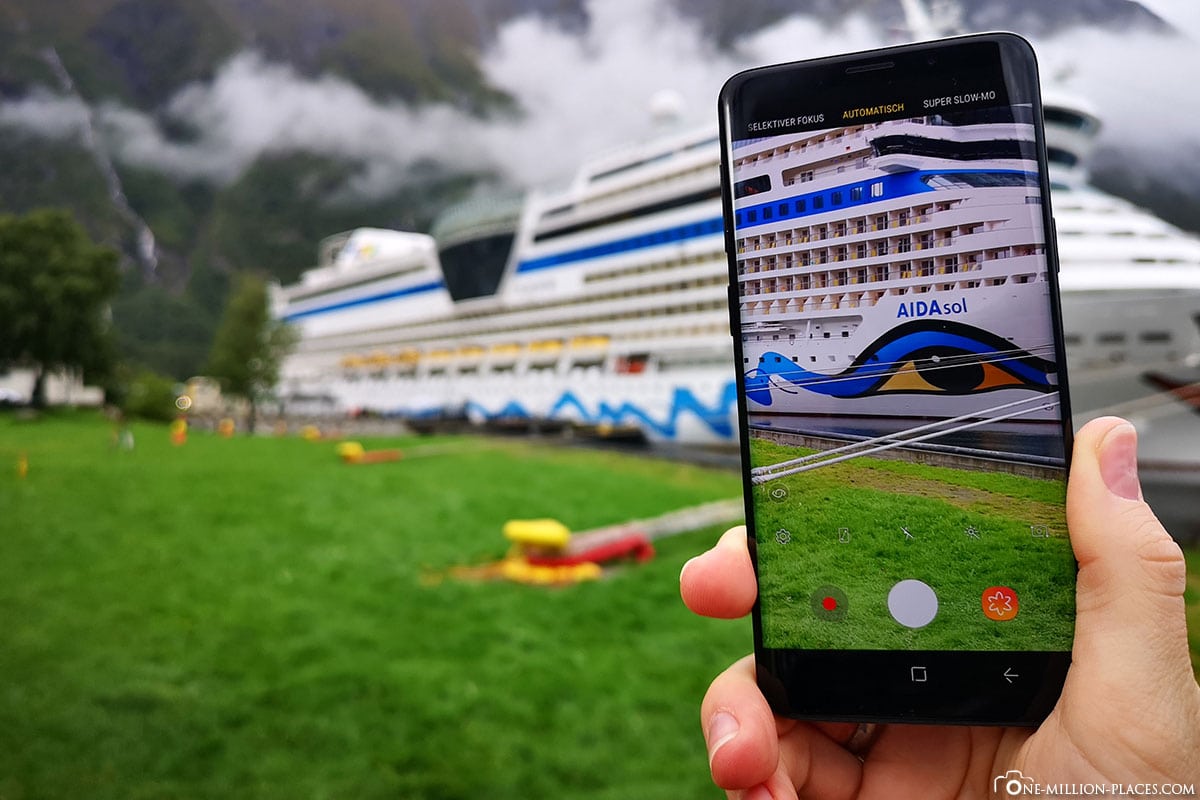 A picture-in-picture with AIDAsol and our mobile phone

The AIDA Port Info of Eidfjord

Our excursion today took us along road 7 to a lookout point, from which one had a great view of the Hardanger Bridge.

The Hardanger Bridge is a 1,380-metre-long suspension bridgethat crosses the Eidfjord. The bridge, which costs more than 200 million euros, has been replacing the ferry service between Brimnes and Bruravik since 2013. In Norway, it is often the case that a toll is required for new bridges, tunnels or sections of road. However, these are only subject to a limited fee until the construction costs have been paid off. For the Hardanger Bridge you have to pay about 15 euros per car to cross it once.

Interesting lynotous lynot, the fjords in Norway are sometimes very narrow, but can be incredibly deep. The fjord has a water depth of up to 500 metres near the Hardanger Bridge, which is why the 200-metre-high pylons had to be built on land. The Sognefjord even has a depth of over 1,300 meters! This is perfect for shipping, but due to the relatively low height of the bridge (55 meters), no large cruise ships can enter the inner Hardangerfjord. 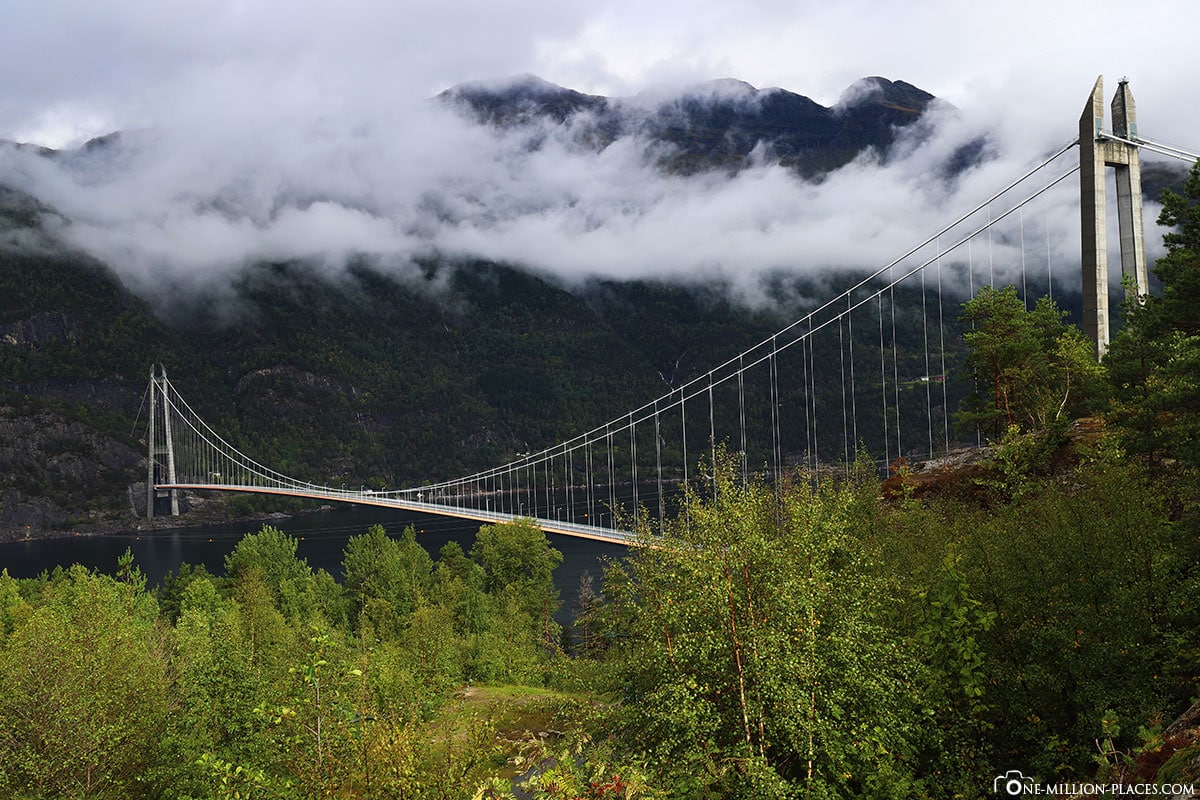 The Hardanger Bridge over the Eidfjord

Our next stop was at the Skjervsfossen waterfall, which is located directly on an old main road, which runs next to today’s road 13 between Granvin and Voss. The waterfall actually consists of two waterfalls, which fall close to each other with a drop height of 150 meters. Since our day of excursion was slightly rainy, the waterfalls were of course very well filled 🙂 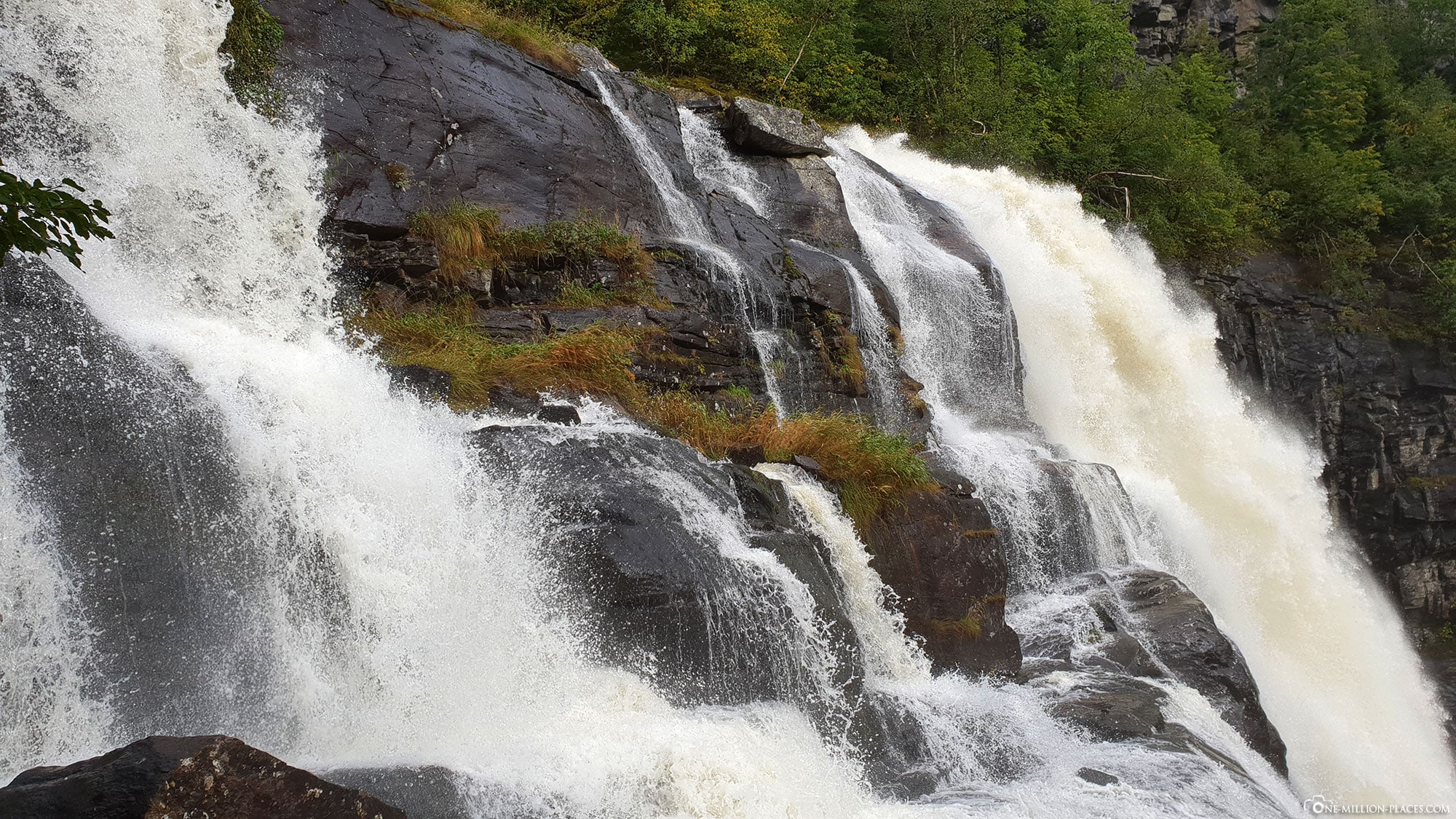 The Skjervsfossen waterfall in Norway

Ride on the Bergen Railway from Voss to Myrdal

After a short bus ride we arrived in Voss, where we were able to refresh ourselves in a hotel at the lunch buffet. Since we still had enough time until the departure of the Bergen-Bahn, we strolled through the small village. In the 7,000-inhabitant town, which is located on Lake Vangsvatnet, there is not so much to see, except for a small shopping street and the church of Vangskyrkja. In a small bakery, which was recommended to us by our tour guide, we tried delicious Norwegian cinnamon snails (Skillingsboller) before we went back to the meeting point. With the rest of the excursion group we walked together to Vosser station.

From here we left in the early afternoon with the Bergen-Bahn in the direction of Myrdal. The 41 km voss-myrdal route is part of the 516 km long route from Bergen to Oslo. The entire line of the Bergen Railway was opened in 1909 and opened to passenger traffic. Until then, it had been a difficult road: 34 years of work were carried out on the entire route, a total of 182 tunnels were carved into the rocks by hand, 300 bridges had to be built. All the more beautiful the result: The Bergenbahn is considered one of the most scenic railway connections in northern Europe.

Small tip: If you drive from Voss to Myrdal, it is best to sit down in the direction of travel on the right – so you can marvel at the passing landscape perfectly from the train 🙂

Ride on the Flam Railway from Myrdal to Flam

After a good three-quarters of an hour’s drive we arrived in Myrdal by the Bergen Train. Myrdal is located at an altitude of 866 meters and is considered a railway transport hub between the Bergen Railway and the Fl’msbahn,which also departs here.

A map of the Flams-Bahn stations © Visit Flam

A few minutes later, the Flam Railway arrived directly opposite, which was to take us down a 20.2 kilometre long route to the village of Flam. The special feature of the Flams Railway is that it overcomes a height difference of 864 metres on the line and is therefore considered one of the steepest railway lines in the world.

The train was well filled, but our tour group still had a train compartment for itself, so that we could sit around nicely and each of us got a window seat. On the route, by the way, it doesn’t matter which side you sit on, because both sides offer beautiful views of the landscape. Actually, we didn’t need a seat at all, because we were standing at the sliding window all the time, from which we could look out and take pictures. And actually every few meters, because there are some highlights on this railway line. The views of the falling waterfalls, the snow-capped mountains and the Flams Valley are worth this train journey. But the fact that 18 of the 20 tunnels were dug by hand is also remarkable. On the upper part of the route there is a 180-degree turning tunnel, which is important to overcome the great difference in altitude.

After 5 kilometers of track, the train stops at the majestic Kjosfossen waterfall and stops here for about 5 minutes, so that all people can leave the train and take a closer look at the waterfall. And here a little surprise happened: Suddenly behind a ruin right next to the waterfall a young blonde woman appeared in a red dress and moved to the music. At first we were slightly confused, because we were not prepared for it and had actually concentrated on the rushing waterfall. So our tour guide had to explain to us first: The woman dressed in red is a huldra, a fairy from the Norwegian legend world. Mostly she is beautiful and beguiles the men with her singing and dancing and takes her off the road. She actually wears a cow or fox tail on her butt, which she hides. If a man throws iron objects over her head, he must marry her. If he is loving to her, it brings wealth and a blessing to the children. If not so, the Huldra turns into an ugly fury.

After the small spectacle, we went the remaining 15 kilometres down to the Flémstal. The ride passed quickly, because there was just a lot to look at on the track. After a good hours of driving, we arrived in Flam with heavy rain.

All in all, the ride on the Flamsbahn is a really great experience!

Video of the waterfalls in Norway

From the train station of Flam we went back to the ship. On the way we made a small detour to the waterfall Tvindefossen, which was filled with a lot of water due to the heavy rain. With each meter we went closer to the waterfall, the clothes got wetter 😉 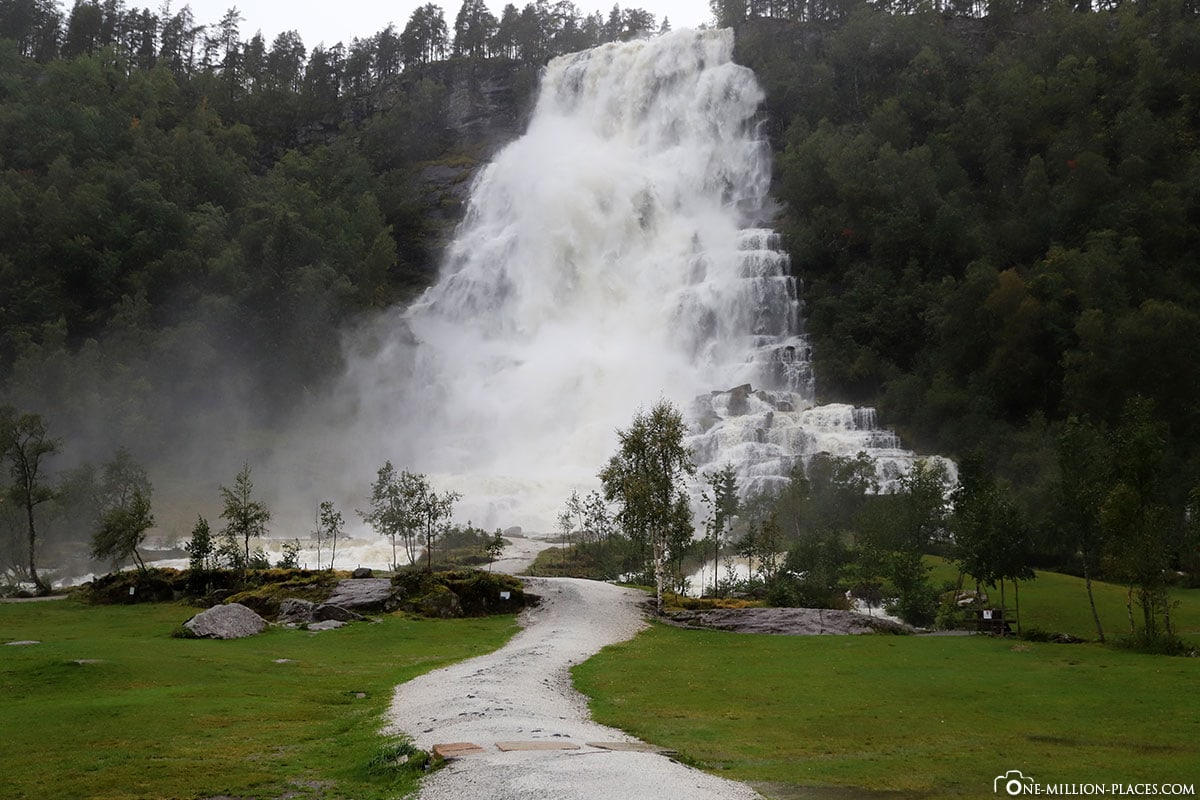 Not far from Tvindefossen is the Stalheim Hotel and the Serpentine Road Stalheimskleiva, which with its 13 hairpin bends is one of the steepest roads in Northern Europe. From the road built between 1842 and 1846 you have a beautiful view of the waterfalls Stalheimsfossen and Sivlefossen as well as into the valley of the valley of the Narydalen.