Since the weather was super nice for this weekend, we decided to make a weekend trip to Luxembourg and Trier. Both cities that we didn’t know yet and both have a lot of attractions to offer 🙂

On Friday afternoon we set out to drive the 260 kilometres from Darmstadt to Luxembourg. Normally you can do this in less than 3 hours, but in the Friday afternoon commute there was one or two traffic jams, so we took about 4 hours in total. Shortly before Trier Sandra noticed two hot air balloons in the distance, which slowly rose into the air. And all of a time it became more and more. Shortly after we left the motorway to take a closer look.

The whole thing is called “MoselBallonFiesta” and is the second largest hot air balloon event in Germany. 80 balloon teams from all over Europe took off for the 12th time this weekend with their different and colourful balloon covers at the airfield in Föhren. On a country road we parked briefly and looked at the many hot air balloons that floated over our heads quite leisurely. We found the balloons in the form of a beer bottle, a unicorn and a clown very funny 🙂

Our Hotel DoubleTree by Hilton Luxembourg

For two nights we stayed at the DoubleTree by Hilton Hotel, which is located about 4 kilometers from the city center. Our choice has been made of this hotel because it offers good value for money on the one hand and free parking is available on the other hand. Another advantage is that the buses to the city centre leave almost at the door (stop: Parc de l’Europe) and you can be in the city within 10 minutes with the bus line 12 (stop: Badanstalt).

Our room was located on the 12th floor and was quite spacious in size. However, the décor was a bit old-fashioned and due to the room location right next to the elevators it was unfortunately also noisy.

Our tip: On Saturday, all buses and trams in the city of Luxembourg can be used free of charge! 🙂

Things to know about Luxembourg

The Grand Duchy of Luxembourg has a population of around 600,000 and is the second smallest country in the European Union in terms of area, with 2,586.4 km2. The capital, also known as Luxembourg (116,323 inhabitants), is famous for its fortified medieval old town. Luxembourg borders Germany to the east, Belgium to the west, France to the south, and is now the last Grand Duchy or Grand Duchy in Europe. The national language is Luxembourgish, the administrative and official languages are French, German and Luxembourgish. Important rivers of Luxembourg are the Moselle, the Sauer, the Our and the Alzette.

In addition to Brussels and Strasbourg, the City of Luxembourg is the administrative seat of the European Union, which is the seat and venue of many European institutions. Luxembourg is also an important financial centre.

A map of attractions in Luxembourg

In the following map we have mapped all the important sights of the city of Luxembourg that we have looked at today. You can see very nicely that everything is quite centrally located in the old town and therefore can be explored well on foot.

What to see in the Upper Town (Old Town) of Luxembourg

The Grand Ducal Palace is the city residence of the Grand Ducal family of Luxembourg and is located in the heart of Luxembourg’s old town. In the past, this site was home to the city’s first town hall; Since 1890, the main part of the building has been used as a grand ducal palace. For 12 euros you can take part in a 50-minute guided tour during the summer months to see the interior of the palace.

If you are standing on Place d’Armes, you will be right in the centre of the shopping streets that stretch in all directions from here. On the square itself is the City Palace (Cercle Municipal), an administrative building with several banquet halls.

On Place Guillaume II (popularly called ‘Knuedler’) there is the town hall (‘Hotel de Ville’) of the city of Luxembourg, built between 1830 and 1838 in neo-classical style, and the equestrian statue of William II, which was unfortunately obscured during our visit due to construction work. Most of the town hall is made of stones from an old Franciscan monastery, which was destroyed in 1829. In 1931, two bronze lions were placed on both sides of the outer staircase.

The Cathedral of Our Lady

The Cathedral of Our Lady of Luxembourg is a Roman Catholic cathedral and is often called Notre-Dame Cathedral. The foundation stone was laid as a Jesuit church in 1613. In 1870, the cathedral was elevated by Pope Pius IX to the Cathedral of Our Lady. Since then, it has been expanded and enlarged again and again. In the crypt, which can be visited free of charge, are the tombs of the large family.

The Monument Of Gélle Fra & the Passerelle Viaduct

After the First World War, the monument was erected in memory of the Luxembourgers who had volunteered in the French and Belgian armies and had died in the First War. It stands for peace, victory and the nation that remembers its war heroes. From here you have a wonderful view of the Petrusstal and the Adolphe Bridge, over which we also walked to the other side of the city. From the Bank Museum Luxembourg we walked down the ‘Rue de Prague’ into the Petrusstal. Here is the viaduct Passerelle (Old Bridge), which connects the station district with the upper town over a length of 290 meters.

Our next port of call was the National Monument of Luxembourg Solidarity on the Cannon Hill. In front of the monument, the Eternal Fire burns in memory of the victims of the Second World War and in memory of the resistance and solidarity of the Luxembourg people against the Nazi occupation. Just a few steps away is the new Palaceof Justice . Since 2010, four 1.80 metre high painted vases made of steel have been standing here. They should stand with their colors red, turquoise/green, yellow and blue for the 4 elements fire, water, earth and air. From the Palace of Justice you also have a great view over the lower city of Luxembourg. The best way to get there is from here with the free lift, which is located in a small building on the left.

The Corniche in Luxembourg, also called the most beautiful balcony in Europe, runs along the ramparts built by the Spanish and French in the 17th century along the Alzette Valley. The trail stretches from the Bockfelsen to the lower part of the Holy Spirit Citadel. At the end of the ‘Chemin de la Corniche’ is St. Michael’s Church, which is considered to be the oldest preserved sacred building in Luxembourg. We particularly liked the colorful stained glass windows here.

Grund is a district of the city of Luxembourg and extends on the banks of the Alzette. The so-called Lower Town was inhabited in early times mainly by craftsmen who used the water of the river to pursue their profession: dyers and fishermen, brewers and tanners as well as cobblers and scissor grinders. In the ground are the Abbey of Neumünster with st. John’s Church, the National Museum of Natural History and part of the old city wall with the Bullbridge. We really liked the village-inspired Grund district, because you can walk here nicely, linger on the banks of the Alzette and enjoy the picturesque area. 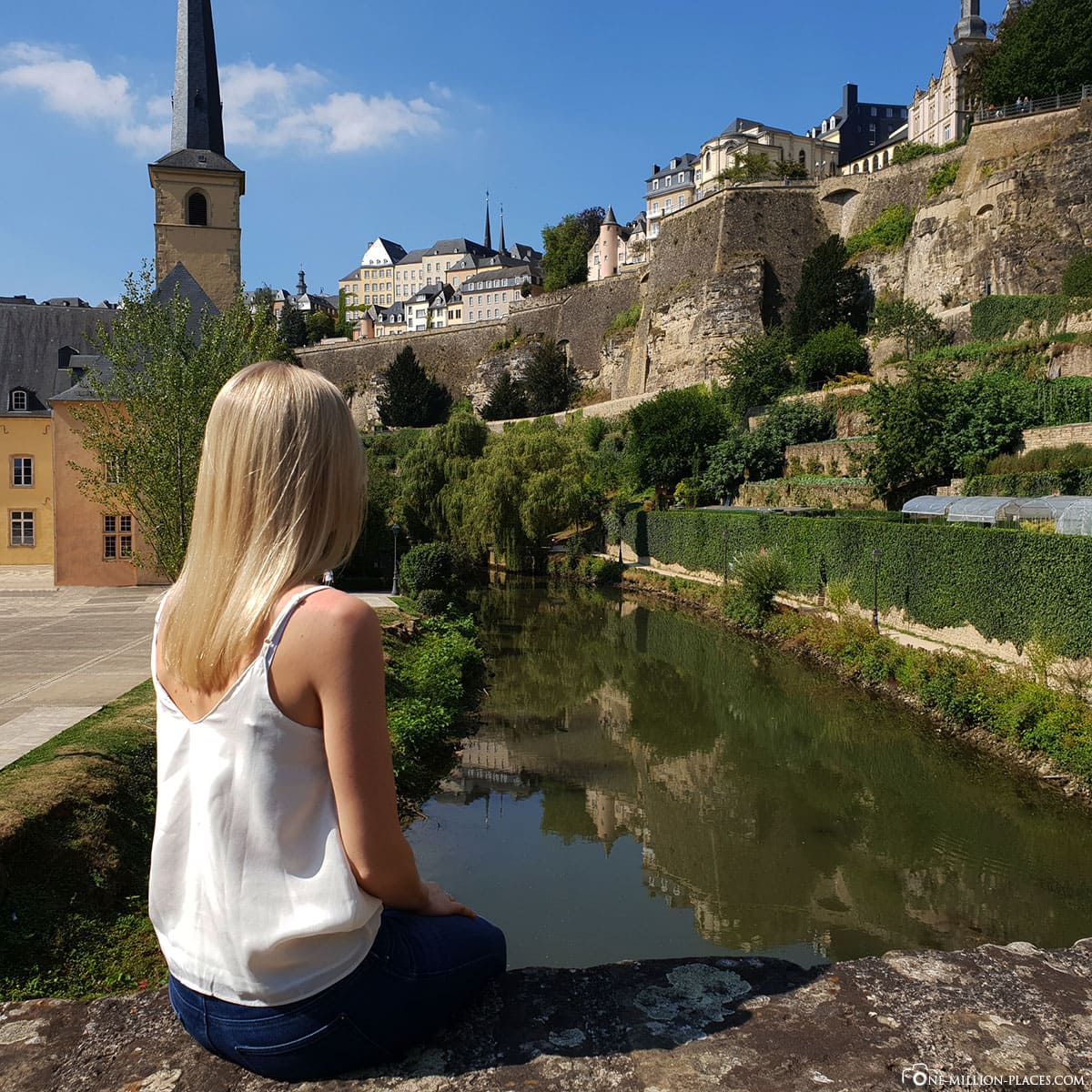 Attractions on the Kirchberg

A few other sights and a good shopping mall are located on the Kirchberg in Luxembourg. Since public transport in the capital is all free on Saturdays, we took a bus to the final stop ‘Luxexpo Entrée Sud’. Here you will find the Auchan shopping centre with many shops, restaurants and a large supermarket in the basement. Directly in front of the shopping centre is the Stater Tram, currently the only tram line in Luxembourg, which opened in December 2017. We then took the tram to the station ‘Philharmonie’. This is where the city’s Philharmonieis located, which is considered one of the most prestigious concert halls in Europe.

Nearby is Fort Thüngen, which is part of the historic fortifications of the city of Luxembourg. We then walked down a hiking trail along the plateau into the Pfaffenthal. This is where the Pfaffenthal-Oberstadt elevator,which opened after six years of construction in 2016, is located here, which takes you from Pfaffenthal to the Upper Town within 30 seconds.

The casemates of the city of Luxembourg

One of the main attractions of Luxembourg are the casemates of the city, the bock casemates and the Petruss casemates. These caves and corridors carved into rocks were originally part of the fortress and were built from the 17th century onwards for defensive purposes. Both casemates have been open to the public since 1933; At the moment, however, the Petruss Casemate is unfortunately temporarily closed (as of August 2018). Therefore, we only looked at the bock casemates. For 6 euros you can move through a labyrinth of corridors and caves – in places on several floors. The special thing about the Bock-Kasematten are the beautiful views of the district ‘Grund’, which you have in many places from the shooting ranges. Since 1994, the fortress and the old town of Luxembourg have been on the list of UNESCO World Heritage Sites.

In total, on this wonderful day, according to our pedometer in the Gear Clock, we walked more than 15 kilometers through the city 🙂

The Starbucks City Cup of Luxembourg 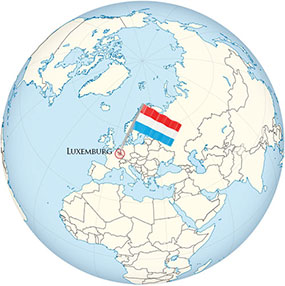