On our way from Traben-Trarbach to Cochem we made a stopover in the picturesque Moselle village of Beilstein. Why Beilstein is described by many guests as the most beautiful Moselle village is quickly clear during a walk through the cobbled streets 🙂

Things to know about Beilstein on the Moselle

The small village of Beilstein is located directly on the right bank of the Moselle and bears the nickname “Dornröschen der Mosel”due to its very well preserved historical townscape. Due to great poverty, there were hardly any structural changes in the city until the 20th century – certainly one of the reasons why the very well-preserved medieval cityscape still exists today.

Beilstein has only about 140 inhabitants – many tourists visit every day and enliven the streets. The place lived for centuries from viticulture, meanwhile also tourism is an important source of income for the many cafes, restaurants and accommodation. 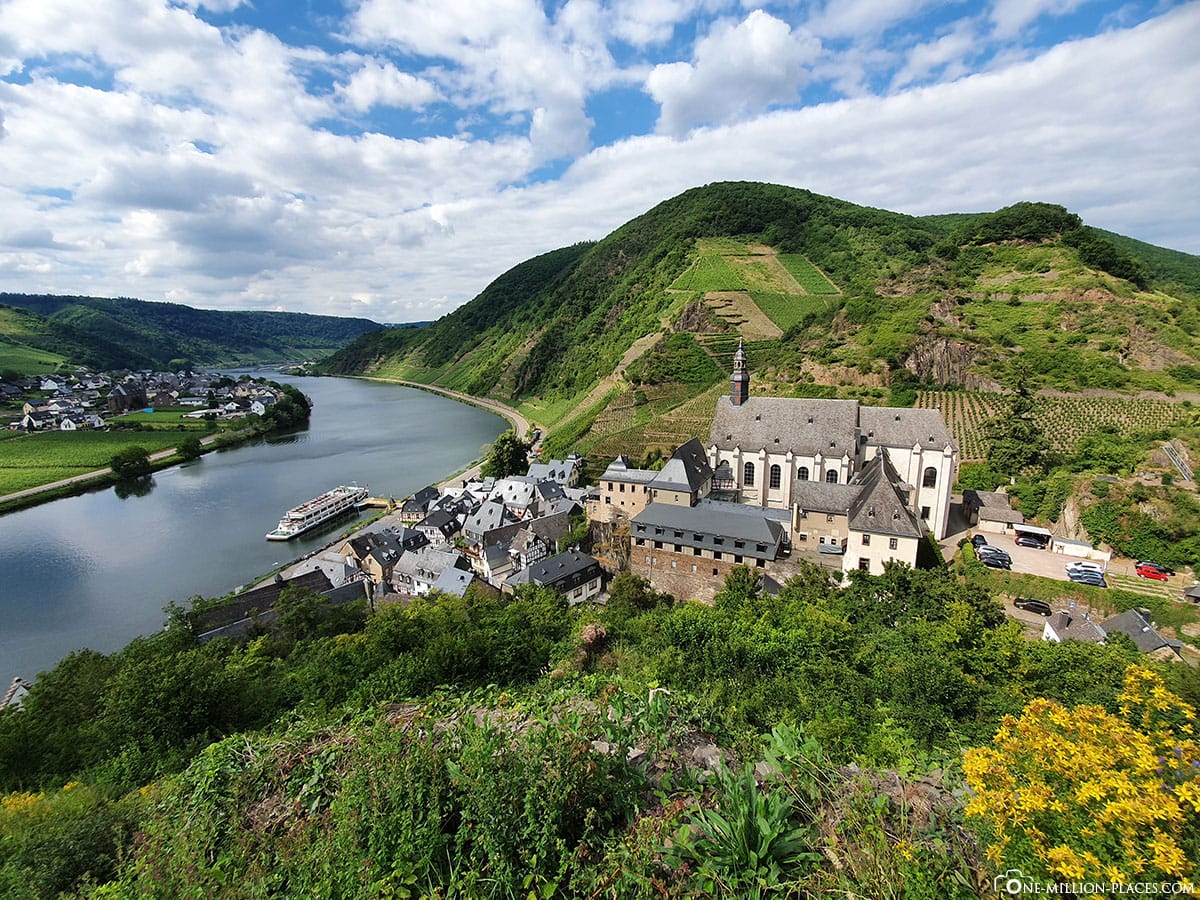 View of Beilstein on the Moselle

A walk through the old town of Beilstein

We parked our car directly on the Moselstraße in a paid parking lot, from which it was only a few minutes walk to the old town.

The old town of Beilstein is relatively compact and easy to explore on foot, as it is really not large. Everywhere there are cobbled and winding alleys with beautifully restored and lovingly decorated half-timbered houses. We liked the picturesque market square from 1322 – it is quite manageable, but it has a very special charm due to the narrow development and the well-attended restaurants and cafés. Also worth seeing on the market square are the former Tenth House, the former parish church of St. Christophorus and the old princely waiter from the 18th century.

The market square in Beilstein

A highlight of the city and certainly one of the most photographed sights is the famous monastery staircase,which leads to the above Carmelite Church of St. Joseph. She fits so picturesquely into her surroundings that she has already served as a film backdrop for numerous feature films.

The Carmelite Church of St. Joseph was built at the end of the 17. and at the beginning of the 18th century built in Baroque style. The church is considered a place of pilgrimage because it is home to the statue of the Virgin Mary, “Black Madonna of Beilstein”, a statue of Spanish origin from the 12th/13th. Century. 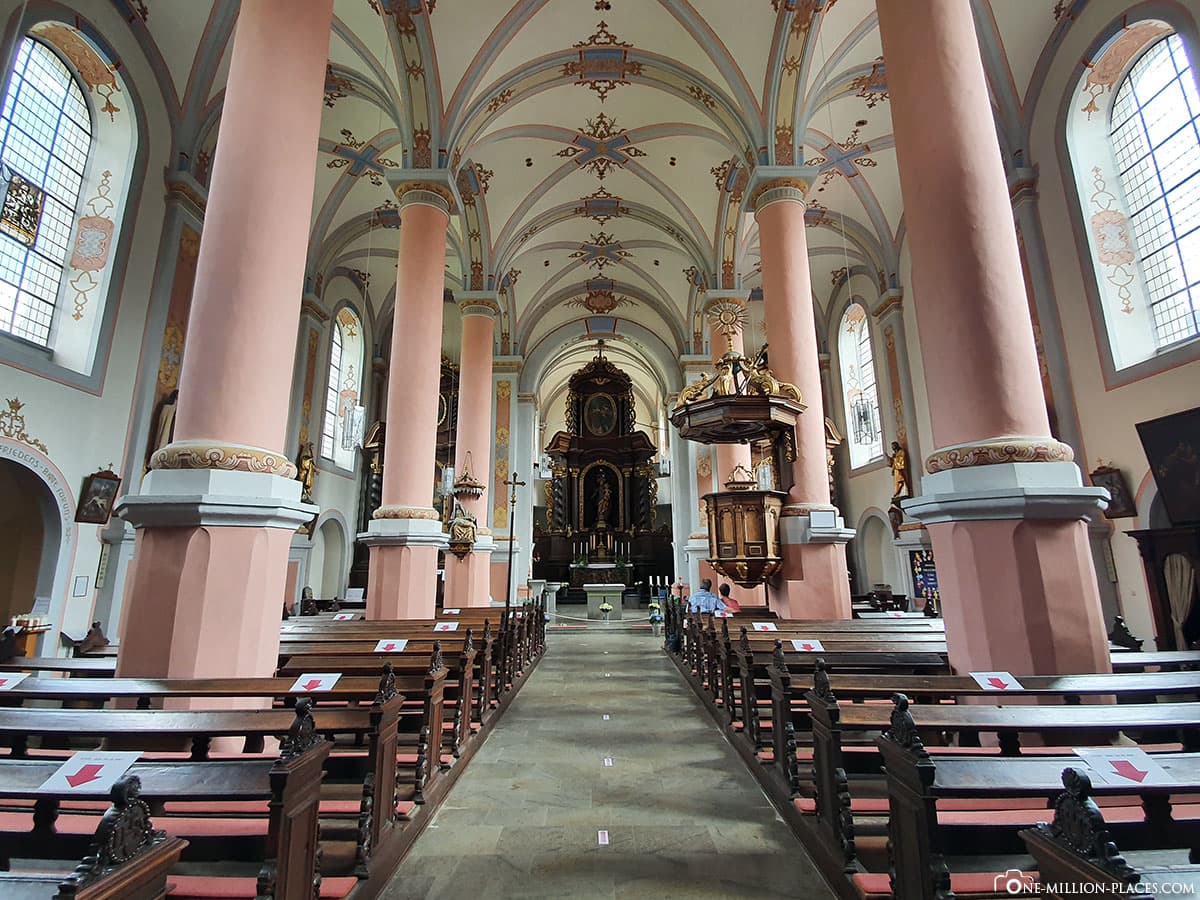 Beilstein is dominated by the ruins of Metternich Castle, which we also looked at. You can either walk to the castle via a steep ascent directly from the city, or drive to a nearby car park, just like us (see Google Maps), puts down his car there and then walks on a moderate footpath for about 5 minutes to the castle. The castle ruins are located on a 60 m high and steeply sloping rocky outcrop on three sides. Entrance to the castle is EUR 2.50 per person.

The history of the castle dates back to 1268, when it was first mentioned in a document. After a few changes of ownership, the castle became the property of the Metternich family in 1637, whose name the castle still bears today. Today it is owned by the Sprenger-Herzer family, who run a restaurant with a beer garden on the premises. In the middle of the castle grounds is the 25 m high pentagonal bergfried, which can actually be climbed as an observation tower. Unfortunately, however, it was closed during our visit due to the Corona pandemic, because the hygiene measures and distance rules cannot be complied with here.

The view from Metternich Castle to the Moselle, which you have from many points, is particularly beautiful 🙂 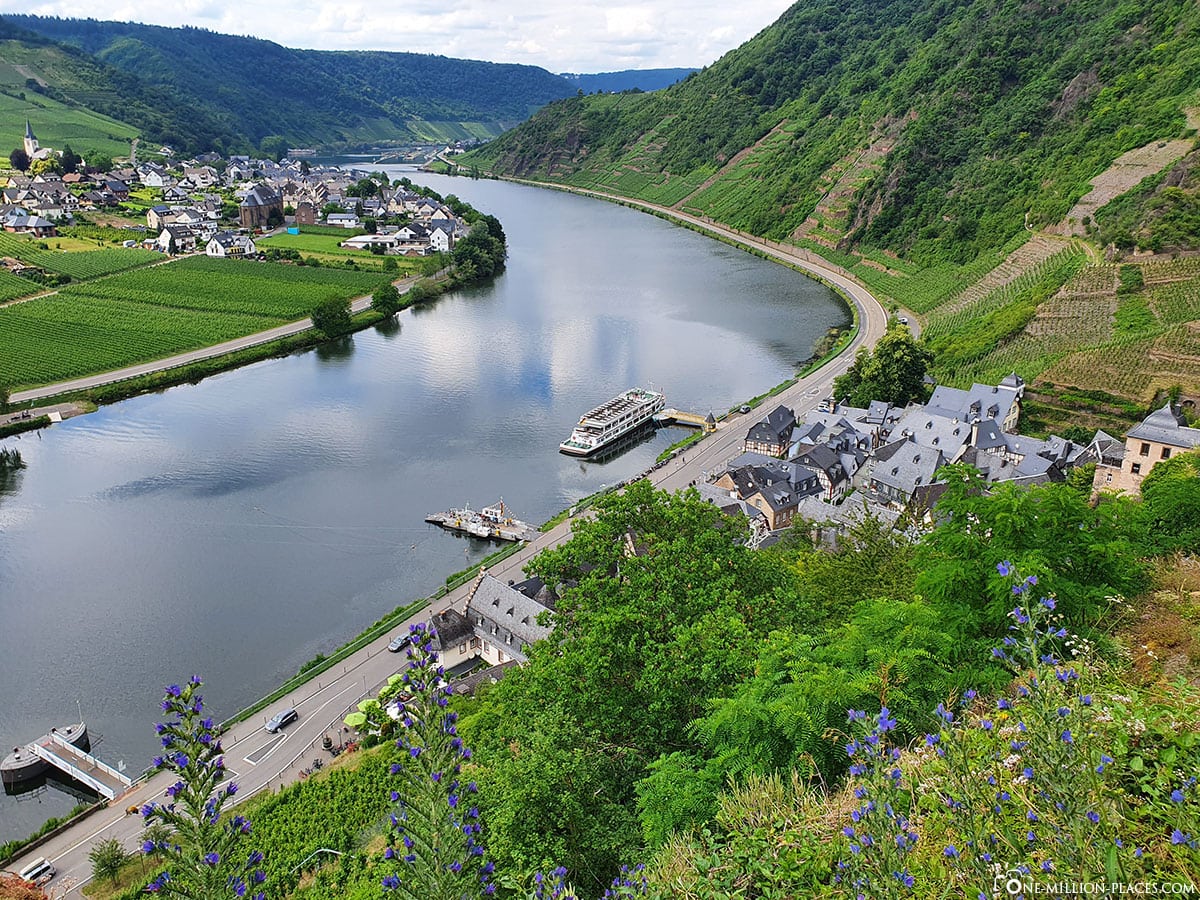 View of the Moselle, Beilstein and Ellenz-Poltersdorf