After we had already explored the city of Luxembourg yesterday in sunny weather, the visit of the city of Trier was scheduled for today. Since Trier is only about 30 minutes from Luxembourg and was on our way home, a sightseeing stop was perfect 🙂

Things to know about Trier

With its foundation in 17 BC as “Augusta Treverorum” Trier is today considered one of the oldest cities in Germany. It was once one of the largest metropolises of the Roman Empire and today has more than 110,000 inhabitants. In the late antiquity period, the thriving trading town was designated an imperial residence. To this day, the cityscape is characterized by monumental Roman buildings, which are among the best preserved of their kind. For us, the visit of the most important sights and monuments of Trier was on the agenda today. Not surprisingly, we were already at the first World Heritage Site at 9 a.m. on this tight schedule 😉

Map with all sights in Trier

In the following Google MyMaps map we have again mapped all the sights of the city of Trier, which we have explored on foot today:

UNESCO World Heritage Roman Monuments, Cathedral and Church of Our Lady in Trier

With the Antikencard Premium, which can be bought for 18 euros at the trier tourist information office or on its homepage, you get admission to the Rheinische Landesmuseum Trier as well as to all four Roman buildings (Porta Nigra, Kaiserthermen, Amphitheater, Thermen am Viehmarkt).

Our first stop in the early morning was the Igel Column , which can be found in the dreamy Moselle village of Hedgehog and which can be reached in about 15 minutes by car from Trier. At first glance, the column stands somewhat inconspicuously between a hotel (on the right hand) and a club building (left hand). But once you stand in front of her, she impresses with her height of 23 meters. The Igeler Column was erected in 250 Ad on this site as a tomb monument of the Secundinians family of cloth merchants and is today considered to be the largest existing pillar tomb north of the Alps. On the relief of the column you can see various scenes that shed light on life in Roman times.

The Roman Bridge over the Moselle in Trier is considered to be the oldest bridge in Germany and represents the oldest Roman bridge north of the Alps. The first wooden bridge was already in the water at this place in 17 BC – coinciding with the founding of the city of Trier. In the following centuries, the bridge always changed somewhat – be it through extensions or repair work.

Almost by chance we passed the Barabarathermen, because we had parked the car here nearby to walk to the Roman Bridge. This would not have happened to the Romans in the past, because the thermal baths from the 2nd century AD were the second largest thermal baths of the entire Roman Empire at the time of their construction and were as big as about 6 football fields. Today, unfortunately, there is not much to see of it. Via a visitor’s walkway you can see some of the remains of the thermal spa area from above and let yourself be transported back in time via illustrations and explanations.

The landmark and certainly the most famous Roman building in Trier is the Porta Nigra (‘the black gate’). The Roman city gate from 170 A.D. is one of the best preserved city gates north of the Alps and was once part of the more than 6 km long city wall. 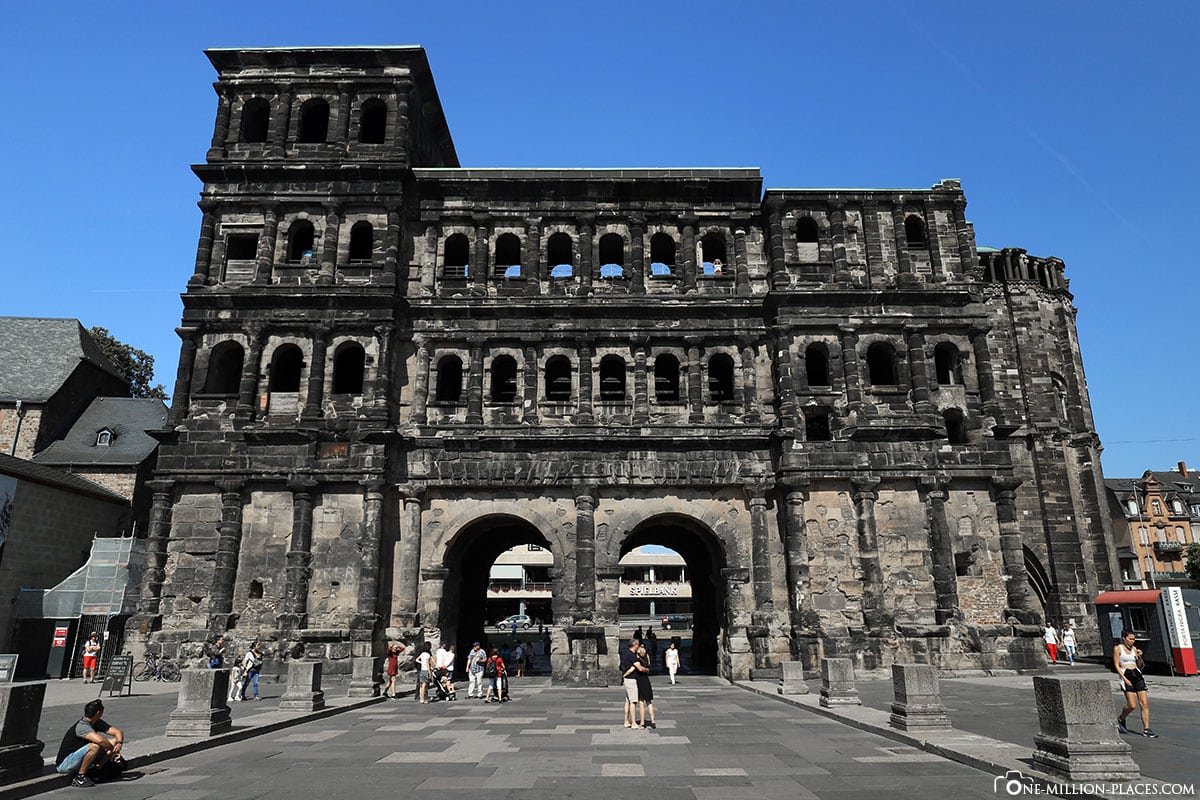 The Porta Nigra in Trier

Today, the gate is open to visitors against admission and you can explore all the rooms and corridors. We found the city model, which can be found in a porch, particularly interesting. But we also liked the view from the windows to the city panorama with the cathedral and main market.

The High Cathedral Church of St. Peter of Trier, located in the middle of the city centre is considered to be the oldest baroque church in Germany and with a length of 112.5 meters and a width of 41 meters it is also the largest church building in Trier. The present cathedral still contains parts of the original Roman core building from 340 A.D., i.e. even original walls with a height of almost 26 meters. After partial destruction, extensions of buildings, tower buildings and elaborate restorations, the Trier Cathedral is now showing its 1,700-year history. The most important and precious relic of the cathedral is the tunic of Jesus Christ, the Holy Rock, which we looked at in the Holy Rock Chapel behind the altar. The authenticity of the piece is somewhat controversial, however, because a textile archaeological investigation could not determine the origin and age of the skirt exactly.

The Church of Our Lady

The Basilica of Constantine

The palace hall, built around 310 Ad by Emperor Constantine the Great, used in earlier times as an audience hall for the Roman emperors. Entering the Basilika, you will only really become aware of the dimensions of the ancient hall: Just 27 metres wide, 33 metres high and 67 metres long – if you include the entrance hall in front of you, it is even 75 metres. In the past, the interior was still decorated with marble, mosaics and statues, but all this was destroyed by destruction and fires. Today the interior of the basilica seems very reduced, but we liked it very much because of the simplicity.

Directly behind the Basilica of Constantine is the Electoral Palace, one of the most beautiful Rococo palaces in the world. Several buildings of the palace complex were built under Constantine the Great, which were built around the Basilica of Constantine. The foundation stone for the later Rococo Castle was laid in 1615 by Elector Lothar von Metternich. The magnificent castle refers to the wealth and influence of the Trier archbishops and electors, who resided in the castle complex until 1794. Today, the Palace is the seat of the Directorate of Supervision and Services. We particularly liked the exterior view of the beautiful south wing, which can be admired today from the palace garden.

In the 4th century AD, a thermal bath with a bath and cold bath was planned on the edge of the Roman palace: the Imperial Baths. Since these were never completed in their originally planned function, they could actually be described as an ancient ruin. In the years after construction began, existing parts of the building were demolished, rebuilt and even rebuilt with other buildings after the project stalled. It was only after the Second World War that the destruction made it possible to examine and uncover the site on a large scale. In the decades since, the present-day complex was created, which can be visited. Particularly impressive is the underground aisle system, in which it is easy to get lost. This used to serve as a supply tract (sewage ducts, combustion points for underfloor heating, water supply, etc.), which was not accessible to the public.

The Trier Amphitheatre was built in the 2nd century AD and was one of the largest arenas in Europe at that time. Gladiotor and animal fights took place on the site under the eyes of up to 18,000 spectators. Today you can see the extensive area, the former stage cellar and the chambers for the preparation of the fights.

The National Museum & the Treasury of the City Library

The Rheinische Landesmuseum Trier is one of the most important museums of Roman antiquity in Europe. In the 19 exhibition halls, the history from the Stone Age to the Roman city & from the Franks to the last Elector of Trier is vividly presented. Most of the museum’s exhibits come from archaeological excavations in Trier and the surrounding area.

A highlight of the exhibition was the Trier Gold Treasure – the largest Roman gold coin treasure ever found. The story behind it is very interesting: the gold treasure was found on September 9, 1993 during the construction of a parking deck in Trier. The excavation pit has already been examined by the Landesmuseum, but during additional excavations, a bronze vessel filled with gold coins was torn apart unnoticed by an excavator. The excavation landed partly directly next to the excavation pit but also on a site near the banks of the Moselle. In both places, amateur archaeologists found the first gold coins a short time later. One of the searchers found most of the coins and then transported them to the National Museum in a plastic bag and bucket. In total, about 96 of the find could be recovered. In total, the treasure contains more than 2,650 gold coinsthat weigh over 18.5 kilograms. The Trier Gold Treasure is invaluable today.

Bibliophile treasures of great value lie dormant in the newly opened treasury of the Trier City Library. Among the highlights of the permanent exhibition is, for example, the ‘Codex Egberti’, which has been a UNESCO World Documentary Heritage Treaty since 2004. The Codex Egberti is a work of Ottonian book painting, which was created under archbishop Egbert of Trier. It is the oldest surviving iconographic cycle of the life of Jesus. Other exhibits in the treasury include the ‘Ada Evangeliar’, the ‘Trier Apocalypse’, the Gutenberg Bible and two large stand globes.

The main market in Trier

The main market is the central square in Trier, which is located in the middle of the historic city centre and where the main business streets converge. The impressive buildings on the main market are partly from the Renaissance, Baroque, Classicism and Late Historicism periods. We particularly liked the Steipe, a white Gothic corner building built around 1430, which was rebuilt in the 20th century after its destruction in world war II. In addition to the Red House, other striking buildings on the main market are the church of St. Gangolf, the Petrusbrunnen, the Marktkreuz, some beautiful half-timbered houses and the Dreikönigenhaus in Simeonstraße.

Other sights in Trier include:

– the thermal baths at the cattle market, whose excavations give an insight into the city’s history
– the Sankt Georgsbrunnen on the Kornmarkt, which is one of the most beautiful Rococo fountains in Germany
– the Alte Krahnen, a harbour crane on the banks of the Moselle from 1413
– the Red Tower,which originally belonged to the Electoral Palace and has served as a bell tower for the basilica since 1968
– as well as the Frankenturm, a medieval residential and defensive tower.

Since 5 May 2018, there is another attraction in Trier: the Karl Marx statue, which was on the occasion of its 200th anniversary. was unveiled on his birthday. The monument is a gift from the People’s Republic of China to the birthplace of Karl Marx, who went down in history as one of the spiritual fathers of communism and socialism. This ideology is still persecuted by China’s government, which is why many people of the People’s Republic celebrate him as a hero. And that’s one of the reasons why Trier is the German city that Chinese tourists prefer to visit! Directly at the junction at the statue you will also find the funny Karl-Marx traffic light males 🙂

Overall, this was a really wonderful day in Trier and we liked the city very much 🙂 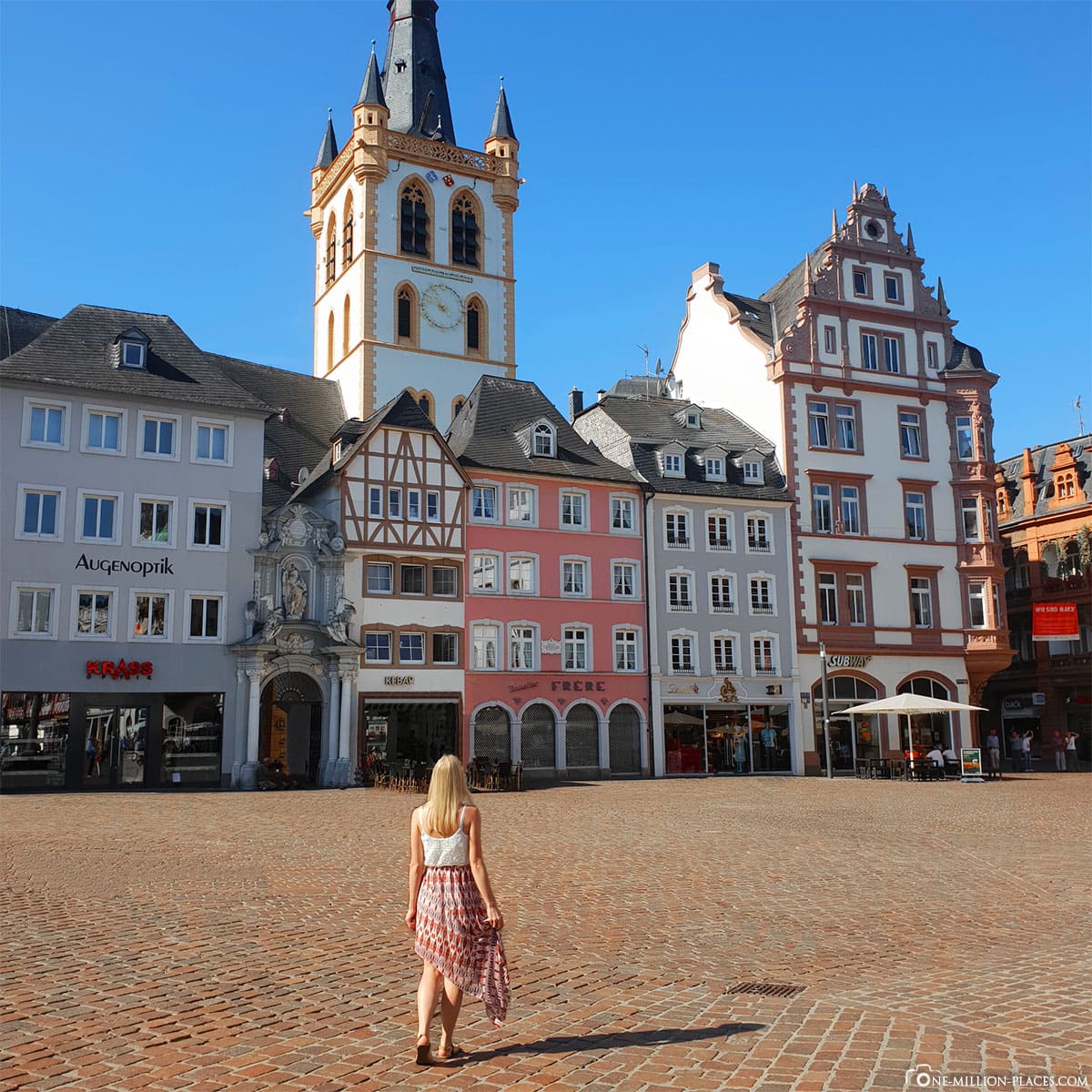 The main market in Trier