Since our flight from Reykjavik took off rather late, we only had one hour to get to the US in Boston before our connecting flight continued to Orlando. As every time, immigration officials asked a number of questions, including when we will return to Germany. When we answered that we were going on a 6-month world tour, we were told with big eyes and the statement “You must be a millionaire. I’m jealous.” looked at. Then there was a “Have a good and safe trip” and that’s it – Welcome to the US 🙂

Arriving in Orlando, we had only rented a small standard SUV at Alamo for more than billiger-mietwagen.de, but were then convinced at the counter to upgrade to the brand new 2015 model of the Ford Mustang. The extra charge was only ‘13.99 per day and the car is simply the bang, the temptation was too great 🙂 It’s interesting that you can actually see Mustangs on every corner in Florida. But it is unbelievable how much this new model interests people here as well. You are even approached in the middle of the motorway by a car driving next to us with a “thumbs up” gesture or approached in the parking lot with a “nice car“. One thing is certain – driving a Mustang is really fun and you definitely notice it extremely.

And what else can you do in Orlando besides all the amusement parks? Shopping! 🙂 So our first day here was reserved only for the Orlando Premium Outlets, the Orlando International Outlets and the Mall at Millenia.

For the 2 nights in Orlando we had booked a room at Sunsol Hotel International Drive.

The hotel sells itself as a resort and can thus charge a resort fee, which has to be paid on site again. When we arrived at night, no one was at the reception and the security guard told us that the receptionist was taking a break but was back. After 20 minutes, he came and didn’t even disappoint. That really isn’t possible. After we moved into our room, which is spacious but has a motel-like furnishing style, we first realized that you can’t exhibit the air conditioning. The receptionist confirmed this to us. Since the air conditioning is directed at the bed, this is of course really unfortunate. Our room was on the ground floor and pointed to the pool. It wasn’t very loud, however. The free breakfast was served in the Splashbar, located directly by the pool. You can sit inside and outside. Breakfast is typically American: bagels, toast and doughnuts – but ok. The free WIFI worked well. 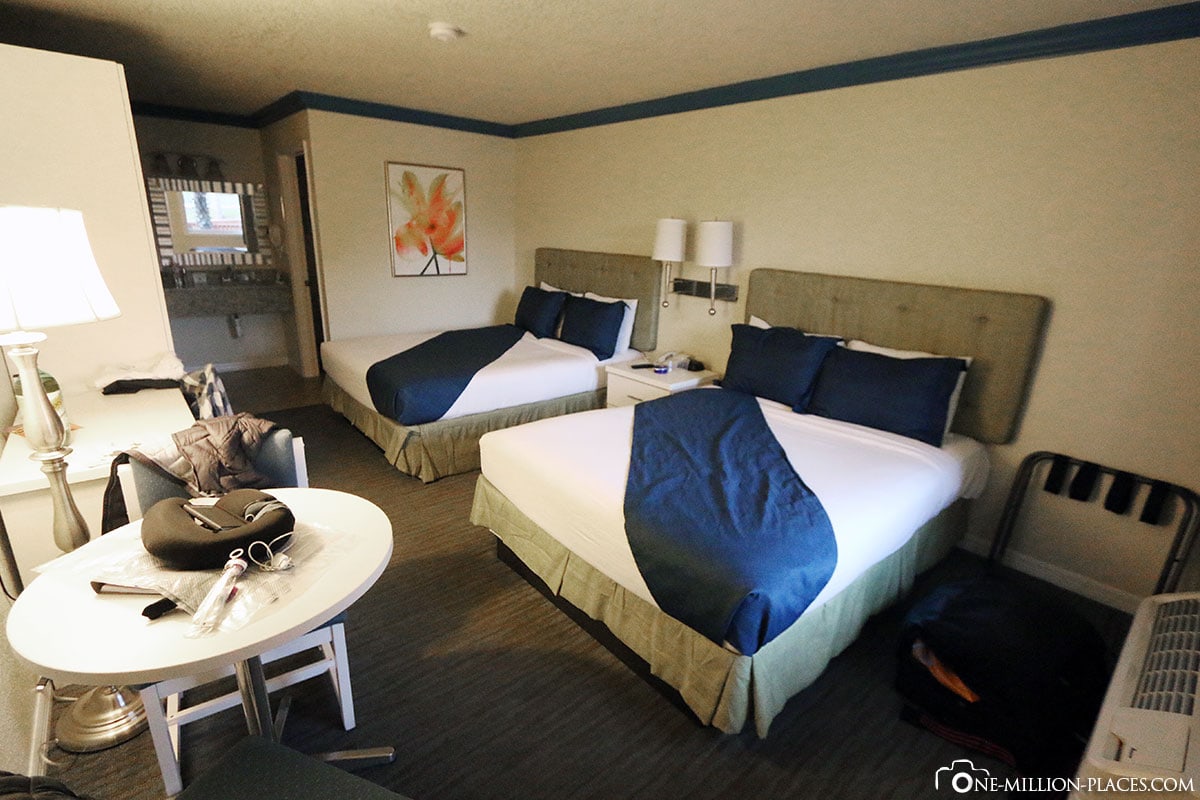 Our room at SUNSOL International Drive

Swim with Manatees in Crystal River

The next morning we took a trip to the Crystal River on the Gulf Coast of Florida, 130 kilometers away. Crystal River is best known for swimming with manatees. This is either possible with a guided tour or you simply rent your own small boat (Jon Boat like us), for that you don’t need an extra boat license here – a simple Driver’s License is enough. A short instruction on what to consider and then we were able to get started. 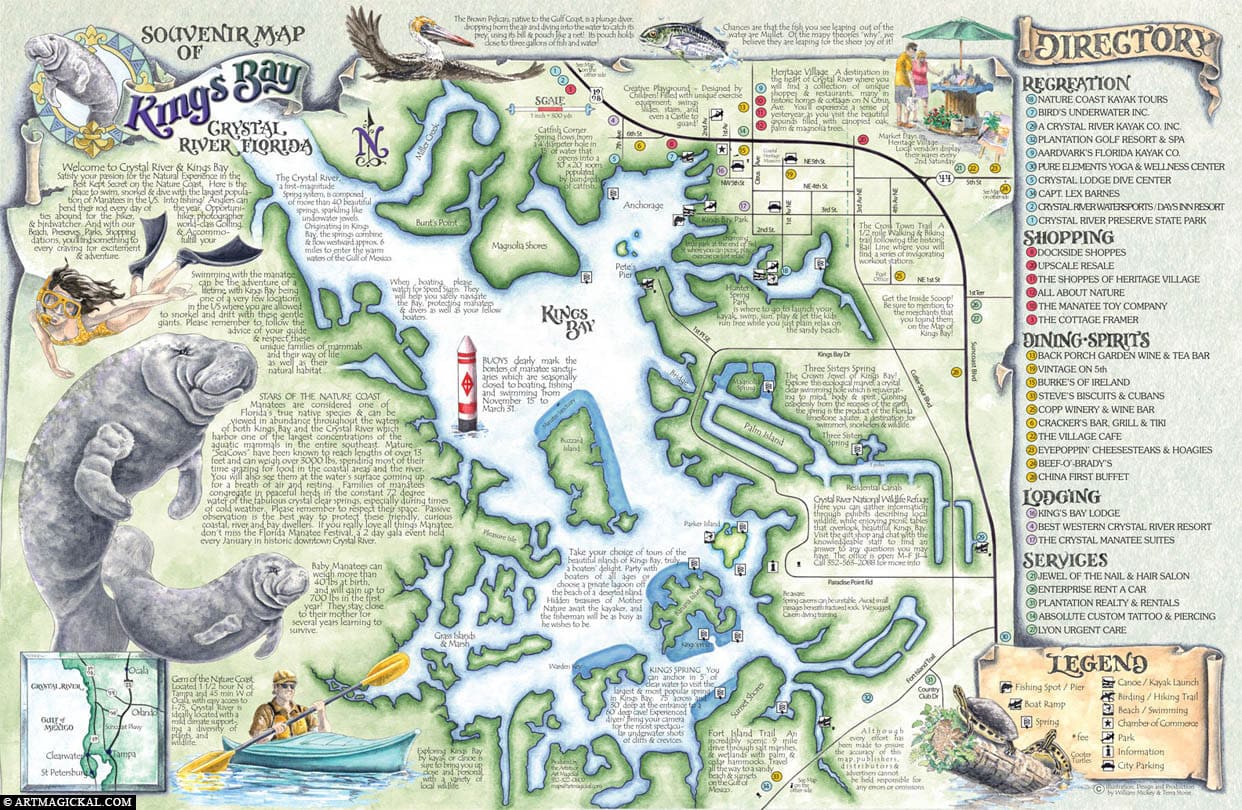 Kings Bay is a beautiful nature reserve and the second largest source in Florida with more than 70 springs. All springs flow into the Crystal River, which itself flows into the Gulf of Mexico after only 10 kilometres. The Crystal River is also the largest winter habitat for manatees on the Gulf of Mexico. We rode around Kings Bay a little bit by boat and it didn’t take long for us to see the first Manatees. It said: Throw anchors, put on wetsuits & snorkeling gears and get into the water 🙂

Manatees (or also called manatees) are really quite harmless animals and we were lucky that we found a totally trusting and above all curious animal. The manatee let itself be stroked, turned again and again and played with the anchor cord of our boat. Manatees can be found here at this time of year, as they gather in the warm springs of Kings Bay during the colder winter months.

It wasn’t so nice that at some point the engine of our little Joan boat went off and any attempt to get it back on track failed. But it didn’t take long and other visitors offered to take us in tow and move back to our boat rental 🙂 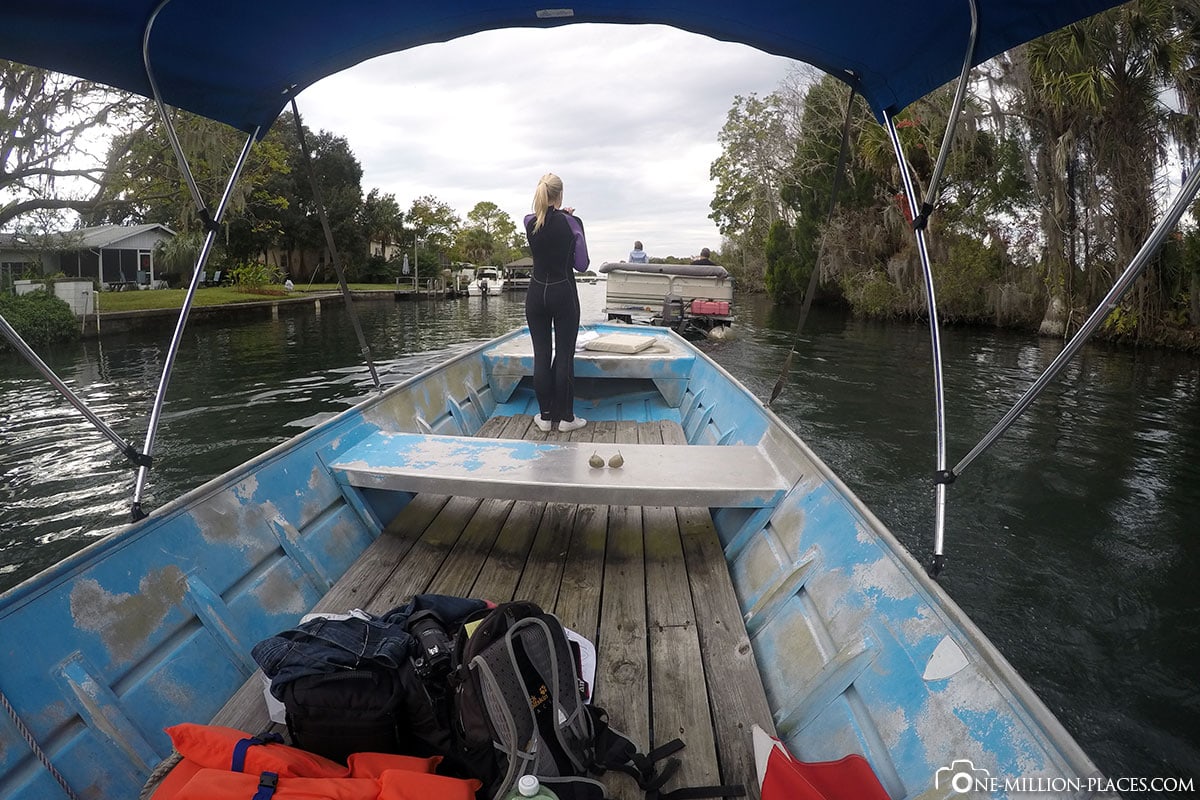 We are towed by another boat

Our video of swimming with Manatees in Crystal River

Overall, it was a great day here at Kings Bay. And here’s a video of how we swam with the Manatees.