During our 3 days in Taipei we visited the most important sights and photo spots of the metropolis in the city.

The sights of Taipei

At Tripadvisor, tripadvisor ranks 2nd out of 551 activities with the National Palace Museum – just behind Elephant Mountain, whose viewpoints rank first. With one of the red sightseeing buses we were able to get off right at the gates of the Palace Museum, which is located in the northern part of the city. The Palace Museum houses the largest collection of Chinese works of art in the world, making it one of the most important museums in the world. Every year, more than 6 million visitors are expected to come here to see the collection of porcelain goods, paintings, jade and bronze pieces. Although we are now being branded as cultural bans, we unfortunately have to admit that we unfortunately do not care about Chinese art museums at all, so that we only looked at the building complex from the outside, but did not go to the exhibitions.

On the grounds of the Palace Museum, besides various administrative buildings, there is also the Zhishan Garden, which can be visited for a very small entrance fee. The garden has some small ponds with swans, ducks and koi fish, which can also be fed.

The white marble memorial hall with the blue brick roof stands at the end of a very large square – surrounded by a beautiful park with small ponds and promenades. Just across the street are the National Theatre, a concert hall and an imposing white archway called “Gate of Great Centrality and Perfect Uprightness”. A longer boulevard and 89 steps (each step represents the president’s year of life) lead to the mighty memorial hallthat towers above everything. In the main hall you can see a 16-metre-high bronze statue of the late President Chiang Kai-shek sitting in an armchair. Especially at the full hours there are a lot of people here, because at this time a changing of the guard takes place. The statue is well guarded at all times by two soldiers – one on the left and one on the right.

With one of the next red Hop On Hop Off buses we drove through the city again and got off at another memorial hall, the Dr. Sun Yat-sen Memorial Hall. The site of the Memorial Hall, which also includes Zhongshan Park, covers almost 29,500 square meters and was built as a memorial to the founder of the Republic of China, Sun Yat-sen, and completed in 1972. In the hall itself there is a statue of Sun Yat-sen, where there is also an hourly change of guard, as well as a museum about his life and the revolution he led. Here we walked through briefly. By the way, you don’t have to pay for the hall and the exhibition – everything is accessible here free of charge.

After a complete round that lasted about 45 minutes, our first stop was the Taipei 101, the most famous building in the city and from 2004 to 2007 also the tallest building in the world. The Taipei 101 is 508 meters high and named after the number of its floors. Building such a high skyscraper in this city is not entirely harmless: Taiwan is one of the most active earthquake regions in the world with over 4,000 earthquakes per year! In addition, several typhoons race over the island every year. In order to withstand these stresses, the supporting structure of a rejuvenating bamboo pole was modelled on it. In addition, between the 88th and 92nd floors there is a 660 tonne steel ball with a diameter of more than 5 meters, which counteracts the fluctuations of the building. Until 2013, the building had the fastest elevators in the world: at around 60 km/h, it was brought up to the 89th floor. There is a viewing platform open to tourists. However, since we did not want to look down on the city from Taipei 101 (there is not much to see), but wanted to see the city WITH The Taipei 101, we did not visit the observation deck. In addition, the visibility was also very limited. There was always a haze bell over the city.

The Love Sculpture in Teipeh

In front of the main entrance of Taipei 101 is one of the well-known LOVE sculptures by the artist Robert Indiana, which can be found in major cities worldwide. We have seen the sculpture before in Tokyo, New York and Philadelphia.

A highlight in Taipei is a hike to Elephant Mountain Viewpoint. We had already researched for the best views of the city and the 101 and this name has appeared over and over again. From Taipei 101 you can easily walk to the “Elephant Mountain”. You only walk a few minutes east down Xinyi Road until it crosses Songren Road. Just follow Songren Road for 700 metres, leave Junior High School on the right and then , when the McDonald’s is on the right at the corner and a 7-Eleven at the left corner – simply go down the left of the road. After about 100 meters, the road makes a small bend – here just walk right and then left up. After another 100 meters turn right and then you can already see the entrance arch of the hiking trail with the many steps. The stairs lead to a viewing platformon which only we were and on which we had a beautiful view of the city including the 101. Dreamlike ❤

After we were back in the city, visiting an important temple was on our agenda. The complex of the Temple of Confucius in the Datong district with its many colourful roofs was built in honour of the great Chinese scholar Confucius. Around the six buildings there is a park with a lake. Since there was nothing going on here, we could look at everything in peace. Right next to the Temple of Confucius across the street is the Dalongdong Baoan Temple. It is hard to imagine that it will have taken almost 25 years for the temple to be completed … among other things, because the complete wood and stone material as well as the craftsmen came from mainland China.

The next stop on our sightseeing tour through Taipei was the presidential palace with its 60-metre-high tower, which was completed by the Japanese in 1919. Since the architects of the time had studied in Germany, the building is stylistically oriented towards Wilhemin town halls. The building is strictly guarded. As we walked past, a black sedan just came from the site and it was meticulously taken to ensure that no photos were taken of it. 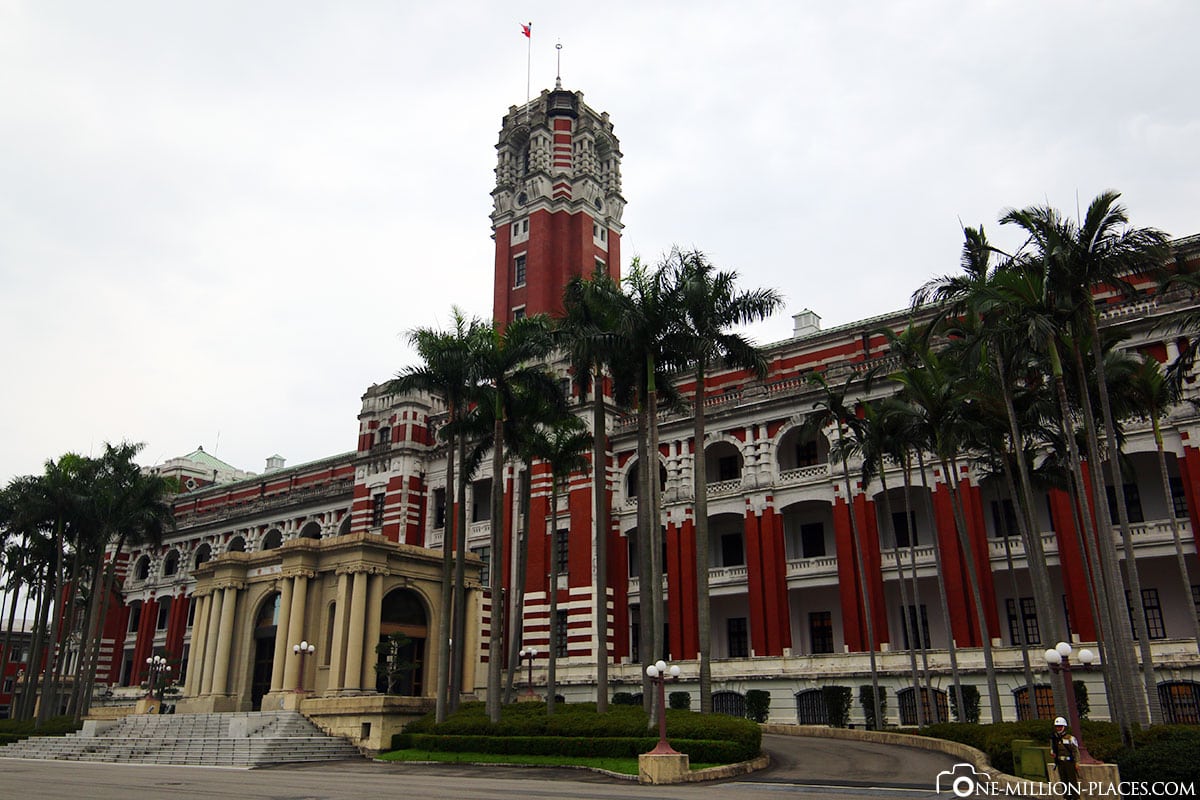 The Presidential Palace in Taipei

Longshan Temple, with 254 years of Taipei’s oldest temple, is located in the city of Manka. The magnificent temple is always well visited – mainly by believers who bring their offerings, light incense sticks and pray … or actually simply use the temple as a social meeting place. When we arrived at the temple, there was a roar of people, a small “parade” and New Year’s Eve firecrackers were constantly lit. The masses of people and everything around them did not radiate the tranquility of a temple on us and seemed almost commercial. Fittingly, the temple even has its own website.

Taipei Jianguo Holiday Flower Market is a very large flower market set up at the weekend under the Jian Guo Road. Here you can admire and buy plants of all kinds, colours and sizes at countless stalls. We just strolled through the market for an hour and looked at the hustle and bustle.

You can spend a little more time in the district of Ximending, which with its pedestrian zone is a popular destination for tourists and also offers plenty of shopping opportunities. We were able to reach the area within walking distance of our hotel. Here you can find, among other things, the Red House (Ximen-Honglou-Theater), which is currently unfortunately hidden behind a renovation tarpaulin. In addition, we have discovered the Tianhou Temple, where a lot of lampions hang on the ceiling. The temple is indeed easy to overlook, as it is barely recognizable from the street and rather inconspicuous. 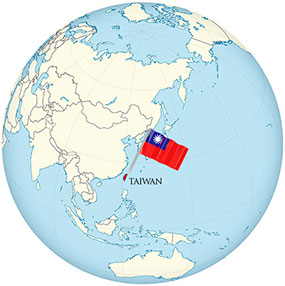