A drive from Miami across the Florida Keys to the southernmost point to Key West is a highlight of any Florida tour! Of course, we didn’t want to miss this and show you some of the most beautiful sights along the route on U.S. Highway 1.

Things to know about the Florida Keys

The Florida Keys are a chain of more than 200 coral islands and stretch off the southern tip of Florida over a total length of more than 290 kilometers. Until a hurricane in 1935, the Florida Keys were connected only by a railroad line. Today they are connected by 42 bridges via the Overseas Highway. Incidentally, the word ‘keys’ does not have to do with ‘keys’, but comes from the Spanish word ‘cayo’, which means ‘small, flat island’. The Florida Keys consist of 5 regions: That’s from north to south: Key Largo, Islamorada, Marathon, The Lower Keys and Key West.

You can download a large map of the Florida Keys here as a PDF version. 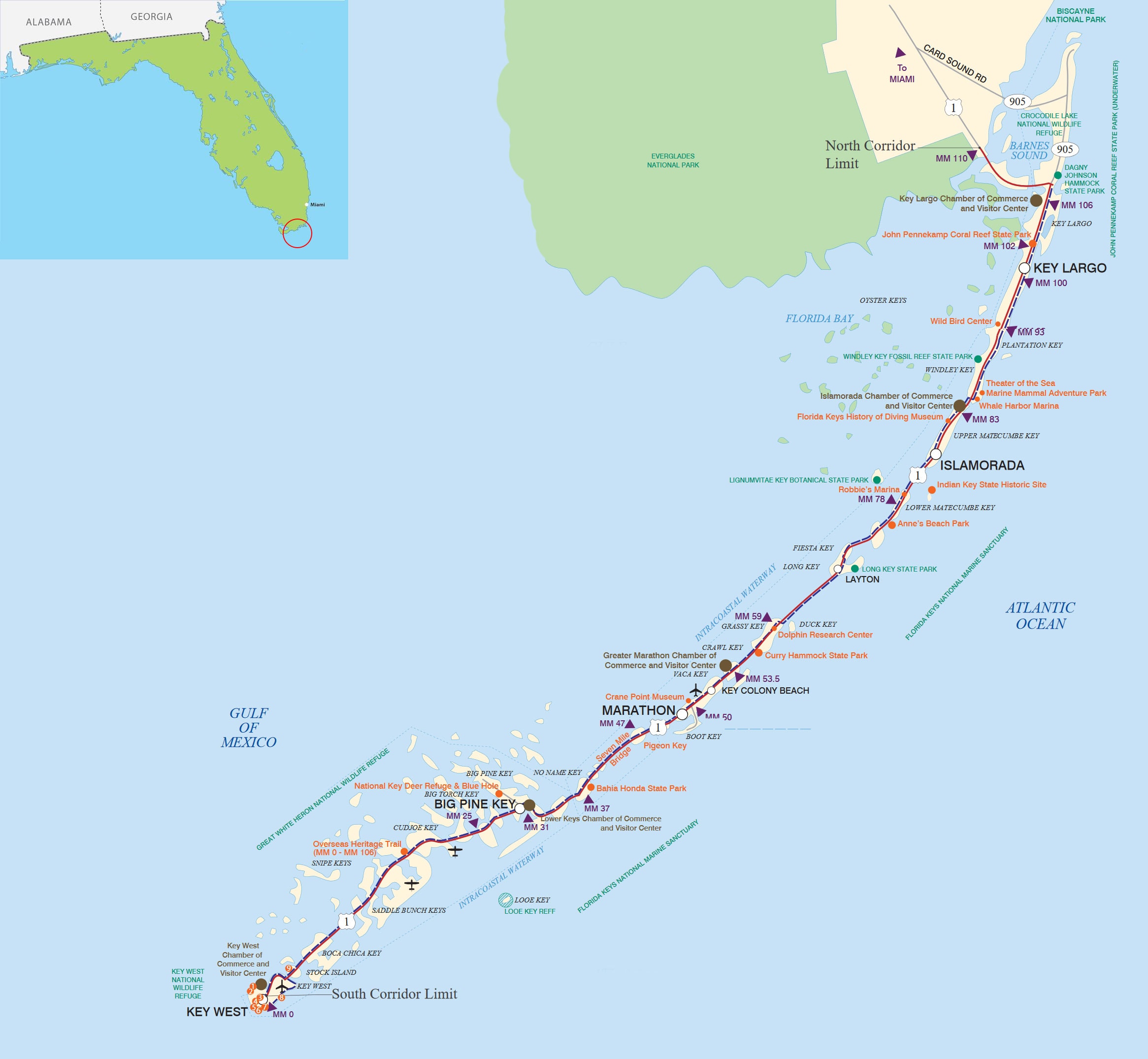 A map of the Florida Keys and the Overseas Highway

Drive along the Overseas Highway

We have to admit that we imagined the trip over the Overseas Highway a little more spectacular. You can only see some of the water at isolated passages, especially if you drive over the bridges between the individual keys. For much of the route, however, it feels like you’re in the middle of a city – on the right and left side of the two-lane road you’ll find plenty of shops, supermarkets and hotels. Only from the island Marathon and the ride over the Seven Mile Bridge comes the real island feeling of the Keys while driving on 🙂

From time to time we went down from the highway and made small stops, such as at Harry Harris Beach and Park.

In the northern part of the Florida Keys is the John Pennekamp Coral Reef State Park. As an absolute underwater lover, we really wanted to make a stop here. But the night before we had received the news that our snorkeling trip unfortunately had to be cancelled due to the weather forecast. What a pity. We would have liked to have explored the State Park in more detail.

The park is over 200 m2 in size and extends over 5 kilometres into the Atlantic Ocean. The State Park is worth seeing both on land and underwater: the land area is covered with tropical vegetation and mangrove forests, and in the water you can explore the only living coral reef in the continental United States. With a total length of 355 kilometers, 40 different coral species and more than 650 fish species, it is considered the third largest living coral reef in the world.

In 1965, a 2.6 metre high bronze statue (Christ of the Deep) was sunk at a depth of seven metres at the Key Largo Dry Rocks in front of the park and has been a popular photo motif for divers and snorkelers ever since.

Our hotel in Islamorada

Since we didn’t want to drive the route to Key West in one day, we were looking for a stopover for the night and booked a room at the Sunset Inn Hotel in Islamorada. Located directly on the Overseas Highway, the hotel is perfect for a stopover.

We got a very tastefully decorated room, which has been recently renovated. Also the bathroom was super equipped. An absolute feel-good room if it hadn’t been for the leaky door and the thin exterior walls. Since our room was not so far from the Overseas Highway, there was a lot of street noise in the room, which did not let us sleep half the night. Here the trucks thunder past every minute. But there are also a few rooms a little further away from the street. Unfortunately, these were all already documented. Actually a pity, because otherwise the hotel is really great!

A very well-known stop along the Overseas Highway is Robbie’s Marina, because here you can feed a lot of huge tarpune. Tarpune are silvery fish that can reach up to 2.50 meters in length. Every day a group of up to 100 Tarpunen comes to Robbie’s Marina and lingers at the pier. Tourists can watch the spectacle daily from 7 a.m. to 8 p.m. for USD 2.25 per person from the pier, or buy a bucket of fish for USD 4 (with about 5 to 8 fish).

Since we were the first visitors around 7.30 am, a nice gentleman from Robbie’s Marina gave us the entrance as well as a bucket of fish for free. How great 🙂 With our bucket we walked over the pier and could already see the first Tarpune swimming under the jetty. We are sure that they already knew that they would get something from us right away. So we threw the fish into the water one by one and watched dozens of tarpunes throw at them. What a spectacle.

The story of why there are so many Tarpune here in Robbie’s Marina is also quite nice: In 1976, Robbie and his wife started feeding a certain Tarpun at the pier – he was later called ‘Scarface’. After a short time, the two saw that the right side of his jaw had been torn open. To save him, Robbie put the tarpun in an oxygen-rich shrimp container and called a veterinarian. The vet approached with needle and yarn and sewed the cracked jaw of the tarpuns again. After several days of forced feeding and after ‘Scarface’ had recovered well, he was released back into the water. Afterwards ‘Scarface’ continued to visit Robbie’s Marina and sometimes brought other fish. Soon more and more fish appeared, which still come to the pier today.

Our next stop was the Dolphin Research Center in Grassy Key, which was founded in 1984 as a nonprofit marine mammal education and research facility that houses a group of 26 dolphins and 3 California sea lions. There are various program points for visitors every day, where you will learn interesting things about the behaviour of dolphins. We stayed about 2 hours in the center and report in a separate post about our visit.

The Turtle Hospital in Marathon

Another non-profit organization for animals in the Florida Keys is the Turtle Hospital in Marathon, which we unfortunately could not visit due to time constraints. A few months ago, however, we got an insight into the facility in a TV documentary. The Turtle Hospital has been in existence since 1986 and has four main objectives:

Since its inception, the Turtle Hospital has successfully treated and released over 1,500 sea turtles.

The Seven Mile Bridge is the most famous and longest bridge on the Overseas Highway and certainly the highlight when driving to Key West. It is 6.79 miles, or 10.93 kilometers, connecting Knight’s Key in the central Keys with Little Duck Key in the lower keys.

When you see the Seven Mile Bridge, you see it twice, because there are two bridges – the old and the new Seven Mile Bridge. The modern bridge is accessible for car traffic, while the older bridge is only accessible to pedestrians and cyclists. The older bridge was built from 1909 to 1912 under the direction of Henry Flagler as part of the Florida East Coast Railway, also known as the Overseas Railroad. However, after a hurricane damaged the line in 1935, the line was sold to the U.S. government, which renovated the Seven Mile Bridge for automotive use. For this purpose, the new carriageway of the Overseas Highway was simply placed on the old railway tracks. Since the old bridge had come of age after some time and no longer corresponded to the level of safety, a new road bridge was built right next to the old bridge, which was opened in 1982.

The old bridge is currently inaccessible as it is undergoing extensive restorations, which will be completed by around the end of 2021. The Seven Mile Bridge has been the filming location in several movies and TELEVISION series, including “James Bond 007 – License to Kill”, “True Lies – True Lies” and “2 Fast 2 Furious”.

Bahia Honda is an island in the lower Florida Keys. The island is virtually uninhabited, but it is home to the 212-hectare Bahia Honda State Park, which was founded in 1961 and occupies most of the island. The park is open daily from 8 a.m. until sunset. For cyclists and pedestrians, admission costs USD 2.50 per person. If you come by car, you pay 4.50 USD per person, for 2 people 9 USD, for 3 people 9.50 USD and for 4 people 10 USD. At the entrance you get a small map in which the most important things are marked.

The main reason for our visit is the great view of the Old Bahia Honda Bridge. At the old railway bridge you can still see that the new carriageway of the Overseas Highway was simply placed on the old railway tracks. Unfortunately, the bridge is only partially accessible.

Of course, we also took a closer look at the beaches of Bahia Honda State Park, because we had already read in advance that the beach was voted the best beach in America in 1992. Expectations were therefore high 🙂

However, we found the beach now not incredibly beautiful or somehow special. On the one hand you will find a lot of seaweed in the water and also directly on the beach. This is intentionally not removed, as it is very important for the ecosystem of the Florida Keys. But of course it stinks accordingly and just doesn’t look beautiful. So we couldn’t quite understand the election. But nevertheless it is of course nice to spend a little time here and enjoy the sun. In the State Park you can also spend your time with kayaks, snorkeling trips or boat trips.

Key West is the southernmost city of the Florida Keys and the continental United States. Here is the western terminus of the Overseas Highway. Whether you want to explore the city as one of many cruise tourists or individually, Key West has all sorts of attractions and activities to offer. Victorian-style villas, palm-fringed streets, a lighthouse, countless butterflies, museums, restaurants and the famous Sunset Celebration in Mallory Square.

What we have seen and experienced in Key West, we show in a separate post.

A video of the Florida Keys

If you want to see some impressions of the beauty of the Florida Keys, you can watch this video that we found on YouTube. A really fascinating and great island world in the south of the USA 🙂