One of the most important points of contact in the Miami metropolitan area is certainly Miami Beach and Ocean Drive in the Art Deco district. The many colourful houses, the palm trees, the wide beach with its colourful Lifeguard cottages, the many restaurants, bars and nightclubs and many hotels in all price ranges – there is always something to discover here 🙂

What you need to know about Miami Beach

Miami Beach, or simply “The Beach”, is a very densely populated city with about 100,000 inhabitants, located east of Miami on an upstream, long-drawn island. The island initially developed from a reception station for shipwrecked people in 1876, over a coconut plantation in the 1880s, the tourist beginnings with the first hotel and the founding of the city in 1915 to a lively own city. Today there are countless hotels, holiday homes, restaurants and nightclubs. The tourist magnet is the region around South Beach with its Art Deco district and the long wide sandy beach. 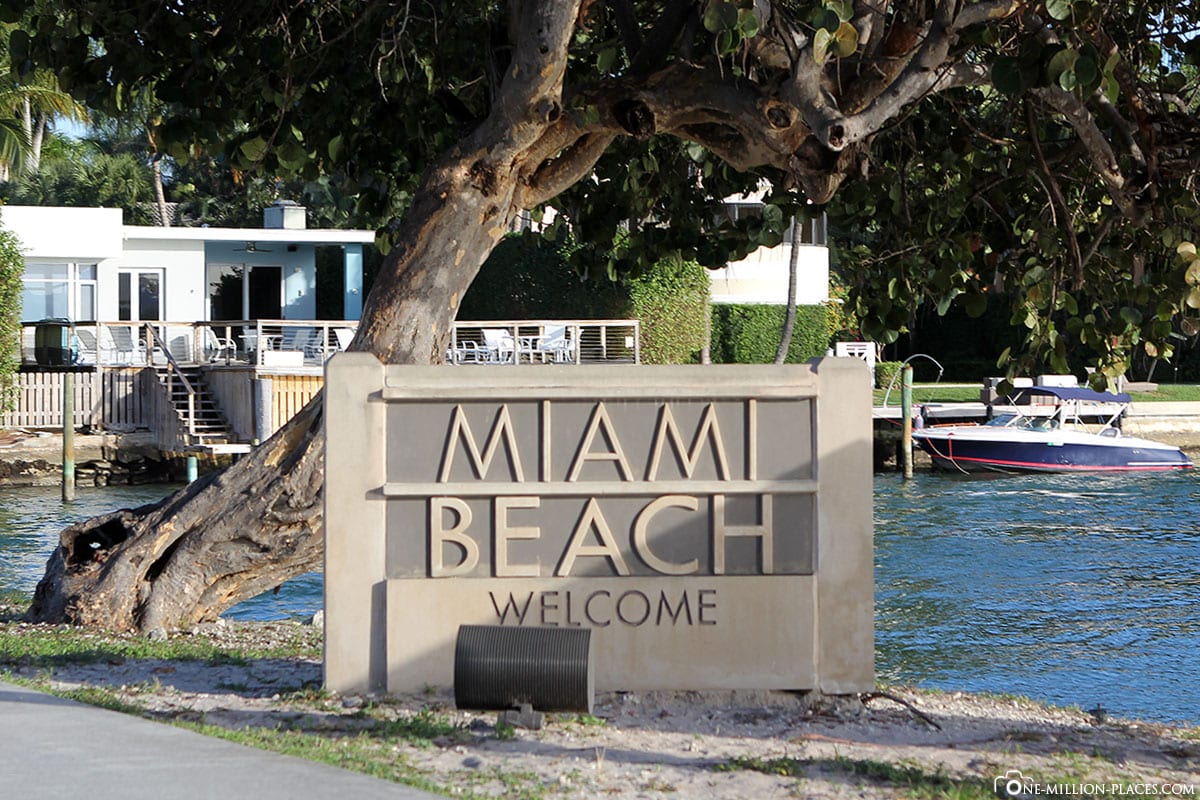 Since we had rented a car for our road trip in Florida, we were also in Miami Beach by car. The island is covered by free car via the A1A (MacArthur Causeway), Interstate 195, Florida State Road 934 or Collins Avenue from the north. On the other hand, the Broad Causeway (2 USD) and the Venetian Causeway (3 USD) are subject to charge.

You can also park directly on the street, but this is twice as expensive. From Ocean Drive to Pennsylvania Avenue and from 5 Street to 15 Street, including Washington Avenue, parking here costs USD 4 per hour. Under this link you can find all parking garages incl. View prices in Miami Beach that are part of the city and therefore offer a reasonable price.

South Beach, located in the south of Miami Beach, is now one of the most popular areas in the city. Many may know South Beach from the television series “Miami Vice”, which has contributed significantly to the neighborhood’s reputation. Prior to the series, South Beach was considered a poor area with a high crime rate. This has changed significantly, because today South Beach with its luxury apartments and apartments is considered one of the most prosperent areas of the city.

South Beach runs from the southern tip to 24th Street and attracts thousands of tourists every day – both during the day and after nightfall, when the streets are even busier due to the many restaurants, bars and nightclubs. The neighborhood is considered the center of the LGBT lifestyle and has been the site of Pride Parade since 2009 during the annual Miami Beach Pride Week celebrations.

Ocean Drive is the most famous and important road in South Beach. The road starts at South Pointe south of 1st Street and runs to 15th Street in the north. The street is mainly known for its many Art Deco-style hotels,as it is located in the heart of the Art Deco district with over 900 well-preserved historic buildings. This makes it the world’s largest contiguous area of houses in this architectural style, after Napier, a city in New Zealand. Most of the houses were built in the 1930s and 1940s, and it was only through the support of citizens’ initiatives that they could be prevented from being demolished in the meantime. In 1979, the Art Deco District, located between the Atlantic Ocean, 5th Street, Alton Road, and Collins Canal, was declared the U.S. Historic District.

One of the most famous hotels on Ocean Drive is the 1939 Colony Hotel. But we have seen many more beautiful hotels and buildings that we really liked. Especially cool was the white-yellow classic car in front of the Avalon Hotel – a great photo motif that fits really well into the ambience of Ocean Drive. We walked a few hundred meters along Ocean Drive, took a lot of photos, watched people and went into one or the other shop. Back we went through Lummus Park, which stretches between Ocean Drive and the Atlantic Ocean.

The beach of South Beach

The mile-long beach of South Beach is another attraction in Miami Beach. During the official opening hours between 5 a.m. and 10 p.m., countless tourists and bath-hungry visitors flock here. Unfortunately we didn’t really like the beach, because at the moment unfortunately there is an unbelievable amount of seaweed lying around on the beach. It must also be said, however, that we have just seen the deserted and fine-puddy sandy beaches in the Bahamas 😉

But what we really liked about the beach are the many colorful lifeguard housesthat you will find every few meters. These shine in the brightest colours and are certainly THE photo motif of the city. Each of the 29 Lifeguard Towers is designed in a different design and only this year some old houses were replaced with new models. So even if you already know the Lifeguard Towers, it is worth a visit again, because there is always something new to discover 🙂

We couldn’t get enough of the cottages and would have liked to have walked the entire beach to see every single cottage, but unfortunately we didn’t have that much time. We liked the southernmost Lifeguard Tower, designed in a red and white lighthouse.

South Pointe Park, a 6.9-acre city park, is located to the south of South Beach. Prior to its use as a public park, it served as a place for police horses, an intelligence unit, and the pilots of the Port of Miami. After all buildings were demolished in the 1980s, the park, which opened in 1985, shone in a new splendour. Today you will find Picknitz squares, a children’s playground, wide sidewalks and a beautiful wooden pier, the South Pointe Park Pier.

From the pier you have a super nice view of the beach and the skyline of South Beach. On the other hand, from here you can also observe very well the passing cruise ships that sail to the port of Miami. Unfortunately, on the day we were here, there was no cruise ship to be seen far and wide – on the other hand, of course, that was also our luck, because the city was not so crowded. Since Miami is the starting point of many American ships for cruises to the Caribbean, there may be days when 3 or more cruise ships dock here.

Our Starbucks Cup from Miami

In Miami, of course, there are many Starbucks stores and also a nice cup of the Global Icon series 🙂

The Starbucks City Cup of Miami