About halfway along the Florida Keys on Grassy Key Island is the Dolphin Research Center, a facility that promotes peaceful coexistence, collaboration and communication between dolphins, humans, and the environment through education, research, and rescue.

The Dolphin Research Center was founded in 1984 as a non-profit marine mammal education and research facility and houses a group of 26 dolphins and 3 California sea lions. We spent about 3 hours visiting the center and learned a lot about the behavior of dolphins.

A professional fisherman named Milton Santini was the first person to deal with dolphins on Grassy Key. As early as the 1940s, he caught dolphins for other marine mammal parks and aquariums as well as for private individuals. His experience with marine mammals led Santini to build the “Santini’s Porpoise Training School” on Grassy Key in 1958 and to train dolphins. Milton Santini is considered a pioneer in the field of dolphin training and keeping.

One of his favorite dolphins was Mitzi, who later got the lead role in “Flipper” and its sequel. After Mitzi’s death in 1972, Santini sold the facility, which continued as the Flippers Sea School. In 1984, the new owner, Jean-Paul Gouin, handed over his facility to his manager Jayne Shannon and his head coach, Mandy Rodriguez, who opened what is now the Dolphin Research Center.

Due to the financial burden, the Dolphin Research Center grew only slowly in the following years. The center included animals that needed a new home, as well as those with chronic conditions that needed urgent medical care. Over time, dolphin babies were also born at the Dolphin Center, so that second, third and fourth generation dolphins now live in the center’s lagoons. Over time, the Dolphin Research Center has become a leader in dolphin care, research and training. This includes educating people and developing programmes for the public.

The Dolphin Research Center is located directly on the Overseas Highway on Grassy Key and is best reached by car (route planner on Google Maps). Free parking is available on site.

The Dolphin Center is open daily from 9 a.m. to 4:30 p.m. The normal entrance fee is 28 USD per person. With this ticket, however, you can only walk across the grounds and watch the animals. If you want to interact with the dolphins, you have to book them additionally.

Things to know about Dolphins

Dolphins belong to the whales and are mammals. They are between one and a half and four metres long. The killer whale as the largest dolphin can even be eight meters long. There are a total of 40 dolphin species, 2 of which can be found in the Dolphin Research Center: there are 25 bottlenose dolphins and 1 atlantic spotted dolphin.

We can already marvel at many dolphins in the wild on our travels, such as in Monkey Mia in Australia, on the east coast of Mauritius,on Dominica,on Curacao,in Egypt or even the funny pink river dolphins from the Amazon 🙂

What do dolphins actually drink?

Do you really know that dolphins live in the sea but can’t drink the salt water? They can only endure salt water in small amounts, because it damages their kidneys. Like all mammals, they have to eat fresh fresh water. Dolphins need around 30 litres of water a day and water intake takes place exclusively through their food. They eat up to 40 kilograms of fish per day. The fish filter the salt from the sea water in their organs and thus contain enough fresh water for the dolphins.

Since older animals can often be undersupplied due to lower food intake, the animals are trained in the Dolphin Research Center to feed fresh water into their mouths via a hose. If a dolphin can no longer absorb enough liquid through the food, it can then easily insert the hose and supply it with liquid. Swallowing the hose does not cause any problems for the animal, as the hose has a smaller diameter compared to the fish. A false supply of water into the trachea is not anatomically possible in dolphins. They only breathe through the blowhole and not over the beak.

The site of the Dolphinarium

When we arrived at the Dolphin Research Center, Mary Stella (Director of Media & Marketing) was already waiting for us. During our stay here, she accompanied us about the site and gave us important information about behavioural training, current research and the establishment in general. We could always ask them everything we wanted to know about dolphins and training, which was really great 🙂

The Dolphin Research Center has an 8,400 m2 area with several lagoon pools where the dolphins are staying. A total of 26 dolphins between the ages of 4 and 45 live here, as well as 3 sea lions. It is possible to connect the dolphin pools together and thus bring the animals together.

When Hurricane Irma passed over the Florida Keys in 2017, the Dolphin Research Center’s terrain was also badly affected. Fortunately, nothing happened to the animals during this time. However, hotels in the region were hit hard in some cases, so that the number of visitors and thus also the revenues in the aftermath of Hurricane Irma decreased significantly.

Research has always been an important part of the Dolphin Research Center, and there are several reasons why research is being done here:

(1) The dolphins and sea lions receive a mental stimulation. For the researchers, it is “cognitive research”, for the dolphins a “thinking game”.
(2) Research contributes to the scientific knowledge of dolphins and other animals. Although a lot of research has been done in recent years, there is certainly still a lot that we do not yet know about dolphins.
(3) The new knowledge generated by research can benefit animals, both in human care and in the wild. Because: The more you understand the animals, the better you can meet their needs.

In addition to its function as a research facility, the dolphins are also used for therapeutic purposes. During our tour of the terrain, we could observe how a boy with a disability interacted with the dolphins in the water. The mother told us that as a family they have flown here twice a year from England for 16 years because the therapy has a positive effect on their son. That was really great to see 🙂

Throughout the day, various program points with the dolphins take place in the water pools, where you can get a very good insight into the training of the animals as a visitor. By the way, the dolphins are not forced to participate. We have experienced for ourselves that a dolphin suddenly had no desire to train. He was immediately left alone and the training or interaction was stopped. The trainings are very important for the research, because it gives you valuable information about the behaviour or certain behaviorpatterns of the dolphins.

Interaction with the dolphins

In addition to the normal visit to the Dolphin Research Center, you can also book various interactions with dolphins, which you then have to pay separately:

(1) Dolphin Encounter (199 USD): At The Dolphin Encounter you go into the water with a dolphin for about 20 to 25 minutes and experience e.g. a dolphin kiss, a “handshake” or you can be dragged by the dolphin through the water.
(2) Family Dolphin Splash (119 USD): In The Dolphin Splash, you stand waist-high in the water on a platform and wait for the dolphin to splash you with water.
(3) Ultimate Trainer for the Day (695 USD): This experience includes food preparation, a small dolphin training session with a trainer, playful dolphin encounters and painting with a dolphin.
(4) VIP Experience (475 USD): At the VIP Experience you accompany the trainers at the dolphin trainings, you look behind the scenes of the sea lions, experience a dolphin family up close under the guidance of a trainer, can be dragged by a dolphin through the water and can have a picture of a dolphin.
(5) Researcher Experience (475 USD): On this tour you can look over the team’s shoulder and learn interesting things about the behavior and training with dolphins. A dolphin encounter is also included.
(6) Play with the Dolphin (85 USD): In this interaction, you can choose a toy and play with a dolphin from the dock.
(7) Paint with a Dolphin (80 USD): We witnessed this interaction first-hand because we were standing at the dock when a family booked this session. The dolphin gets a brush with paint in his mouth. The visitor holds a stretched white T-shirt over the dolphin, which then makes some movements on the T-shirt with the brush. The masterpiece is finished 😉
(8) Meet the Dolphin (30 USD): For this encounter, you sit on a floating pedestal and wait until the dolphin comes to one to pick up your petting unit.
(9) Dolphin Explorer (75 USD): From the dock, you can watch the trainer perform mind games with the Dolphins as well as research-related activities. In addition, trainers provide first-hand information about the research carried out in the center.

In total, we spent a good 3 hours at the Dolphin Research Center, learning a lot about the animals and life on the Florida Keys from Mary 🙂 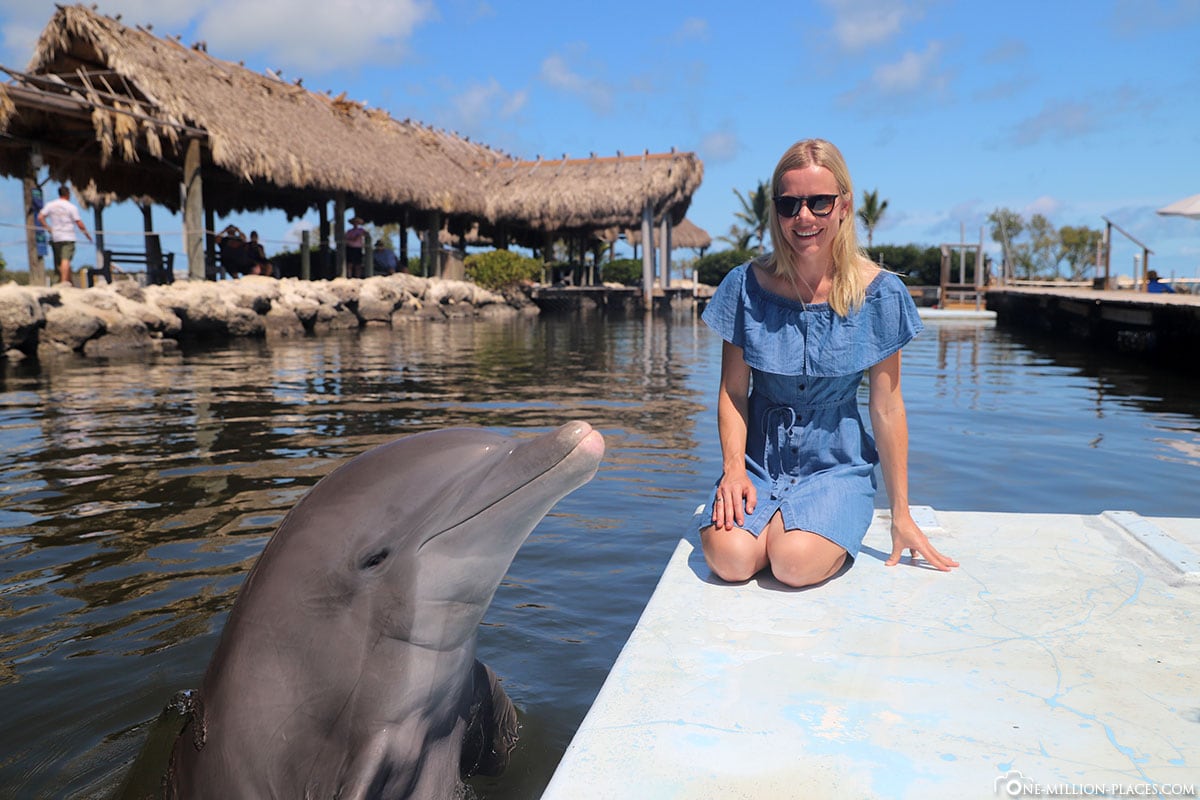 Interaction with a dolphin at Dolphin Research Center