After visiting Philadelphia yesterday, the last stop of our trip was the capital of the USA: Washington D.C.

Arrival in Washington & our hotel

From Philadelphia, we drove the 220-mile route to Washington, D.C., via Interstate 95 and the Baltimore-Washington Parkway. We chose the Americana Hotel in the Arlington district as our hotel.

Washington D.C. is the capital of the United States since 1800 and has a population of about 600,000. The metropolitan area is home to more than 5.5 million people. The city is named after George Washington, commander-in-chief of the War of Independence (1775-1783) and the first president of the United States. With the White House as the president’s office and residence, and the Capitol, which houses the Senate and House of Representatives, and the Supreme Court, the top three constitutional powers are in the city. Washington is also home to the International Monetary Fund, the World Bank, and the Organization of American States.

Many of Washington’s attractions (such as the Capitol, the Washington Monument, or the White House) are centrally located around theNational Mall,the city’s national promenade.

A “Hop On Hop Off Tour” with Big Bus

However, since some sights such as the Jefferson Monument or Arlington Cemetery are a little further away, we decided to do a Hop On Hop Off tour with Big Bus. A large map of the Big Bus Tour in Washington with the different routes can be downloaded here. 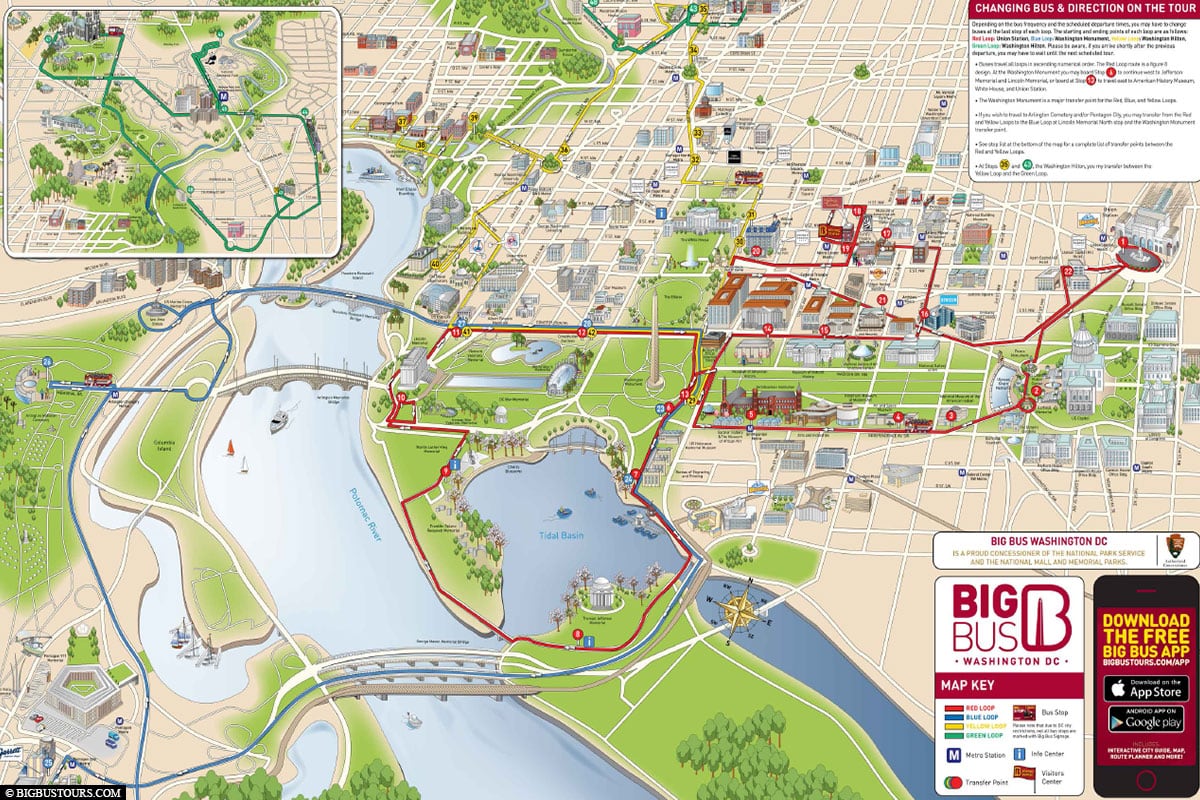 Hop On Hop Off Tour routes in Washington

Travel Guide & Things to Do in Washington D.C.

Next we walked to the Washington Monument, which is right on the national promenade. The National World War II Memorial is also located here.

The Jefferson Memorial was built in honor of the third president of the United States, Thomas Jefferson.

To the west of the Jefferson Memorial is the Franklin Delano Roosevelt Memorial,inaugurated on May 2, 1997. Four different areas lead through 12 years of the history of the United States, each area stands for a term of Franklin Delano Roosevelt. If you go a little further, you can get to the Martin Luther King Jr. Memorial. The memorial is reminiscent of the American Baptist pastor, civil rights activist and Nobel Peace Prize laureate Martin Luther King, who was assassinated in 1968, the history of the african-American civil rights movement and its concerns.

A tour of the U.S. Capitol

Next we went to the Capitol, as we had booked a guided tour online through the U.S. Capitol Visitor Center for 1:30 p.m.

Our tip: It is best to book a tour of the Capitol a few weeks in advance via the official website, as the tours are quickly fully booked!

The National Air and Space Museum

The National Air and Space Museum is a museum affiliated with the Smithsonian Institution, which displays numerous exhibits from the history of aerospace, including the Spirit of St. Louis or rocks from the moon.

On our Hop On Hop Off tour, we also passed Washington National Cathedral, which is the sixth largest cathedral in the world and the second largest in the UNITED States.

With nearly 5,400 funerals a year and more than 260,000 burials since its inception, Arlington National Cemetery is the second-largest cemetery in the United States after Calverton National Cemetery in New York. Probably the most famous grave in the cemetery is that of john F. Kennedy, the 35th President of the United States, who was assassinated on November 22, 1963, with an eternal flame.

The U.S. banknotes and their original buildings

We had once seen a picture on the Internet of someone showing half of the US banknotes and completing them with the original building. Since buildings from Washington D.C. are depicted on almost banknotes, we did not want to miss this opportunity, and also try this 🙂

The Starbucks cup from Washington D.C.

Washington has several Starbucks stores and also its own cup 🙂