If you’re in New York for the first time, this 18 million metropolis with the Bronx, Queens, Brooklyn, Staten Island and Manhattan can easily overwhelm you. There’s so much to see – but where do you start best? This travelogue shows you a walk through Manhattan that combines the main sights and photo spots.

There are currently 315 million cities in the world, according to Wikipedia. That’s a lot! And whether Beijing, Mumbai, Sao Paulo, Delhi, Tokyo, London or Paris – none of these cities we have seen on our travels so far is like New York. New York is simply unique and fascinating at the same time. Michael has been to New York 20 times, we have been there three times. And again and again this impressive skyline impresses us and you will always find new shops, buildings and sights to explore. This statdt has simply captivated us.

Compared to many other major American cities, New York has a really well-developed public transport networkfrom our point of view. With the metro alone, you can move around in this huge city relatively well and cost-effectively and get to the main attractions without any problems.

Nevertheless, we find it best to explore the city on foot, especially when you’re in New York for the first time.

Most of the sights in New York are in The Manhattan neighborhood:Times Square, Central Park, 5th Avenue, Empire State Building, World Trade Center, Grand Central Station, Wall Street and more. Manhattan can be imagined as a vast built-up island with more than 1.6 million inhabitants, bounded to the west by the Hudson River, to the east by the East River, and to the northeast by the Harlem River. Manhattan is nearly 22 kilometers long and up to 3.7 kilometers wide.

But how to explore all these sights on foot now – and best in just one day? Here we have compiled from our experience an ideal route, how to walk through Manhattan from Central Park to the southern tip and pass some of the most famous sights of the city. 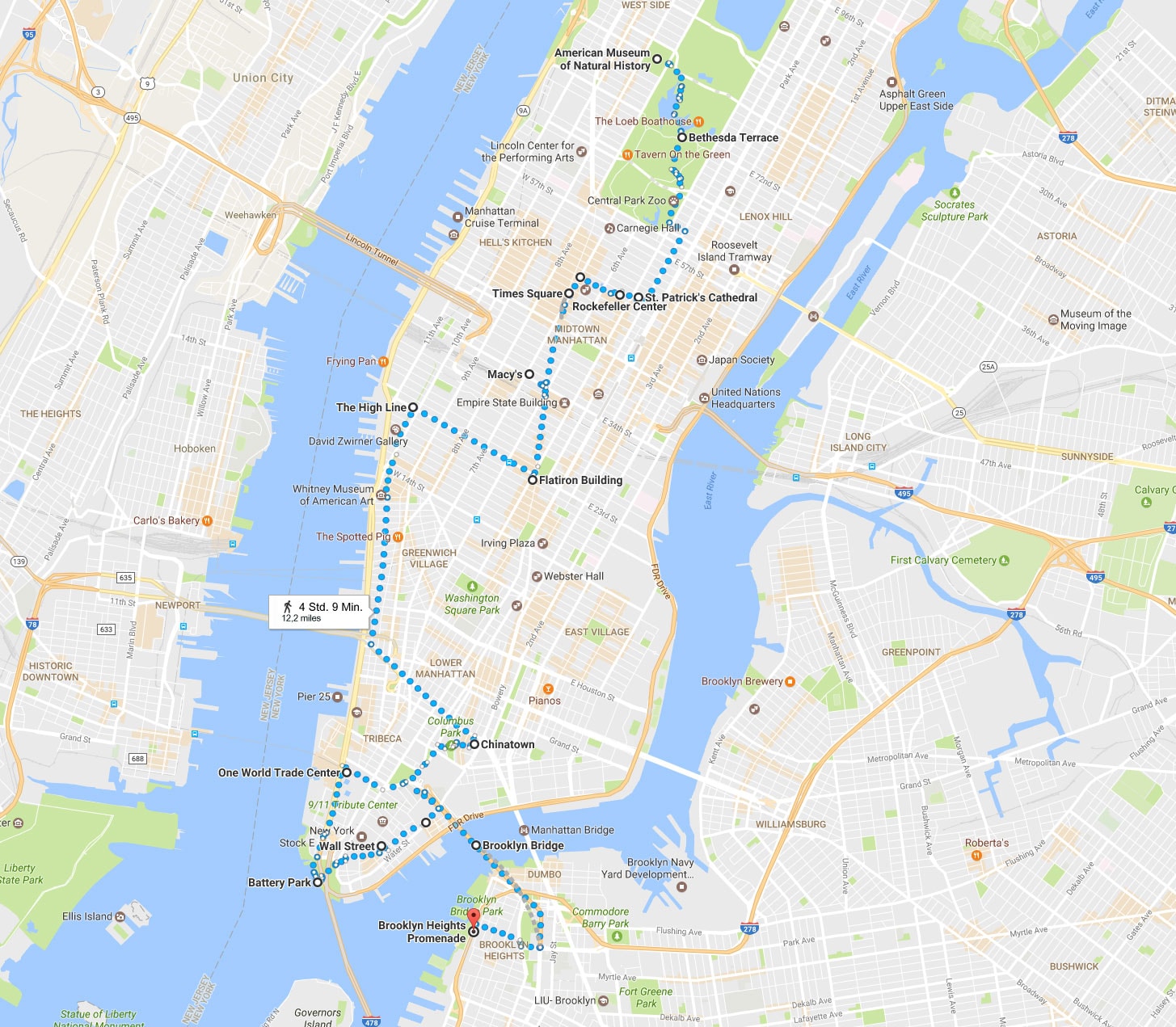 Our Walking Tour of Manhattan

From Central Park to Lower Midtown

The individual stations at a glance:

The start of our walking tour is at the American Museum of Natural History at Metro Station 81 St – Museum of Natural History (lines A B C). From here it goes directly to Central Park. In Central Park, the first step is Belvedere Castle, a small castle from 1869 with a lake. From the tower of the castle you have a fantastic view of the park and the adjacent streets like 5th Avenue. And the best thing is – admission is free. Then we continue south to Bethesda Terrace and Fountain. The angel over the waters of Emma Stebbins was erected as a monument to the construction of the Croton Aqueduct water pipeline in New York’s Central Park. Next, in the southwest corner of the park, you’ll come to Umpire Rock, or Rat Rock. This is one of the most impressive rocky outcrops in the park and testifies to the existence of long-gone continental glaciers. Here you can climb the granite rocks and have a magnificent view of the Manhattan skyline.

After leaving Central Park via 59th Street, continue along 5th Avenue past The Plaza Hotel and the Apple Store. The more than 10 km long 5th Avenue is considered one of the most famous streets in the world and is the most expensive street in the world in terms of rental prices. Here you will find above all the flagship stores of major brands.

The nearest attraction is St. Patrick’s Cathedral, the largest neo-Gothic-style cathedral in the United States. We recommend to go to the interior of the cathedral. Admission is free, from which you have one of the best views of New York!

Almost opposite St. Patrick’s Cathedral is the Rockefeller Center. This is mainly known for the huge Christmas tree and the ice rink in front of it at Christmas time. Here, however, is also the viewing platform “Top of the Rocks”.

From Rockefeller Center, it’s within walking distance of the colorful lights of Times Square,which is located at the intersection of Broadway and Seventh Avenue. The numerous illuminated advertisements and the lively activity around the square leave you amazed every time and are also great photo motifs.

On Broadway, we continue to Macy’s in Herald Square, which describes itself as the largest department store in the world.

Not far away is the Empire State Building, which is still the most famous building in the city.

Another New York landmark is the 91-meter-high Flatiron Building, with its unusual wedge shape, “wedged” between 5th Avenue and Broadway.

From Lower Midtown to Brooklyn

Part 2 of the route (14 kilometers, at least 3-4 hours) takes you from the Flatiron Building to Downtown and finally via the Brooklyn Bridge to the Brooklyn neighborhood.

The individual stations in the Überbick:

From the Flatiron Building, head west to the High Line. The High Line is a two-mile decommissioned freight train line in western Manhattan. Since 2009, you can walk 10 metres above sea level on the old railway line through the canyons of the Chelsea district.

At the northern end of the High Line, you reach Hudson Yards, a new neighborhood on the western edge of Manhattan that opened in 2019. The district has many residential and office towers, as well as shops, restaurants and a hotel. The center of the district, however, is “The Vessel” – a walk-in sculpture with 154 stair elements, 2,500 steps and 80 viewing platforms! As a visitor, you can visit this new attraction every day between 10 a.m. and 9 p.m. – and completely free of charge.

From High Line Park, it goes through the Greenwich Village district to Little Italy.

Continue to the district Chinatown. In the middle of New York, you think you’re in a completely different city. Totally crazy.

The 9/11 Memorial & One World Trade Center

From here it is not far to the One World Trade Center and the “North & South Towers Mermorial”. It is also home to the National September 11 Memorial and Museum and the One World Observatory.

Battery Park & the Statue of Liberty

From World Trade Center it is now not far to the southern tip of Manhattan. Here is Battery Park,from which ferries depart for Ellies Island, the Statue of Liberty and Staten Island.

Again a little northwards it goes over to Wall Street and the Federal Hall.

More information about this route

In total, the route from Central Park to Brooklyn so a good 20 kilometers! And of course, there are many other sights along the way, such as the Central Park Zoo, Grand Central Station, New York University, the Metropolitan Museum of Art, Radio City Music Hall, Madison Square Garden, or the Manhattan Bridge.

If you want to see the sights described above in one day, you have to leave relatively early in the early morning, so that you are in Brooklyn at sunset. The whole thing only works if you only look at the sights from the outside. If you want to go to the observation deck of the Empire State Building or the One World Observatory, if you want to go by boat to the Statue of Liberty or visit the 9/11 Museum, then of course you can’t do it all in one day. New York is just too big for that! But if you really want to walk through Manhattan in one day from Central Park to Downtown, this is an absolutely great route 🙂

New York, of course, has many Starbucks stores and also its own cup 🙂