Today we went to the second island of our Hawaii holiday. We were looking forward to Big Island, because on the largest Hawaiian island we had already planned some great activities. The official name of Big Island is ‘Hawai’i’, as is the name of the entire state and archipelago. But not to confuse the two, most people just talk about Big Island.

As with our last Hawaii vacation, we chose Hawaiian Airlines for interisland flights. The connection between the islands always fits perfectly from the times and the airline makes a safe, serious impression. We had already booked and bought our tickets online. The price per ticket from Oahu (Honolulu) to Big Island (Hilo) cost us about 85 euros. Unfortunately, the baggage is not included in the fare and would normally cost US 25 US dollars per person per bag. Quite a lot. On our trip around the world we had already won a Hawaiian Airlines Membercard (“HawaiianMiles”) because even if you don’t fly often with the airline, you can save a lot from the first booking. For example, with the luggage: If you are a member, you pay only 15 US dollars in baggage fees instead of the 25 US dollars. A whopping saving of 40.

After about 45 minutes we landed safely on Big Island and had our luggage in our hands super fast. Now all we were missing was our rental car. The airport in Hilo is really not big, so within a few minutes you can stand at the car rental desks, which are located directly opposite the entrance/exit hall. We had already booked our car online in advance via billiger-mietwagen.de with the provider ALAMO. Since our complete data was already in the system, it was also very fast that we had our keys. Quickly load the luggage into the car, search the route and off we went to the hotel.

Our room at Hilo Hawaiian Hotel

For the next three nights we stayed at the Hilo Hawaiian Hotel, which is located right on the coast. It takes just 7 to 8 minutes from the airport. The central location of the hotel was very important to us, because the routes on Big Island can be very long. But since we also wanted to have a few supermarkets, malls and restaurants around us, the choice quickly fell on the town of Hilo.

The Hilo Hawaiian Hotel has 286 rooms and is located on beautiful Banyan Drive, which is lined with countless Banyan trees. For a double room we paid just 104 euros – that was already relatively cheap for Big Island around this time. But if you compare a lot and use a discount coupon from time to time, you can save really well at hotels. Parking is free on the hotel grounds and if there aren’t any celebrations taking place in the hotel (was like this with us in one day), you can easily find a parking space here. The lobby is very open and generous. Even though we were already here around 11 o’clock, we got our room directly, so we had the opportunity to move again before we grabbed our cameras and went on an island discovery tour.

Our double room was also very generously designed. There was nothing missing – we even had a small balcony (which we didn’t use). The internet here is free of charge and has worked quite well. Only the air conditioning was a bit noisy and disturbed. Otherwise we liked the hotel and we can recommend it without hesitation.

Akaka Falls State Park is located only about 27 kilometers north of the Hilo Hawaiian Hotel and can be reached by car in about 30 minutes by car via Highway 19.

If you drive towards the gates of the park, you can park right and left right in front for free. As soon as you are in the park, there is also a parking space, but you pay 5 US dollars for it. You can save yourself that easily. If you park outside, you still have to pay the entrance fee of 1 US dollar per person. So if you come here with several people, you can also park quietly in it, because the entrance fees are already included in the 5 US dollar parking fee and it doesn’t make much difference where you park.

From the car park, the hiking trail goes directly to the two waterfalls – Akaka Falls and Kahuna Falls. The trail is a 700-metre-long circular trail,which we first followed straight ahead. The path is fixed and in some places it is necessary to take several stairs. But the surroundings are really great – a real jungle to walk through here. And if you look closely, you will also see some inhabitants and beautiful plants.

First you passed a lookout point where you should actually see the 30 meter high Kahuna Falls. Unfortunately we haven’t seen anything here – but we’ve heard it 😉 A short walk further you will come to Akaka Falls.

Already from a distance we were able to break the Akaka Falls, which from a height of 135 meters into the depth. This looks breathtaking when you stand at the top of the railing and look at the opposite waterfall. At the vantage point there are still some information boards and seating. If you follow the circular route, you will arrive at the starting point after a short time. 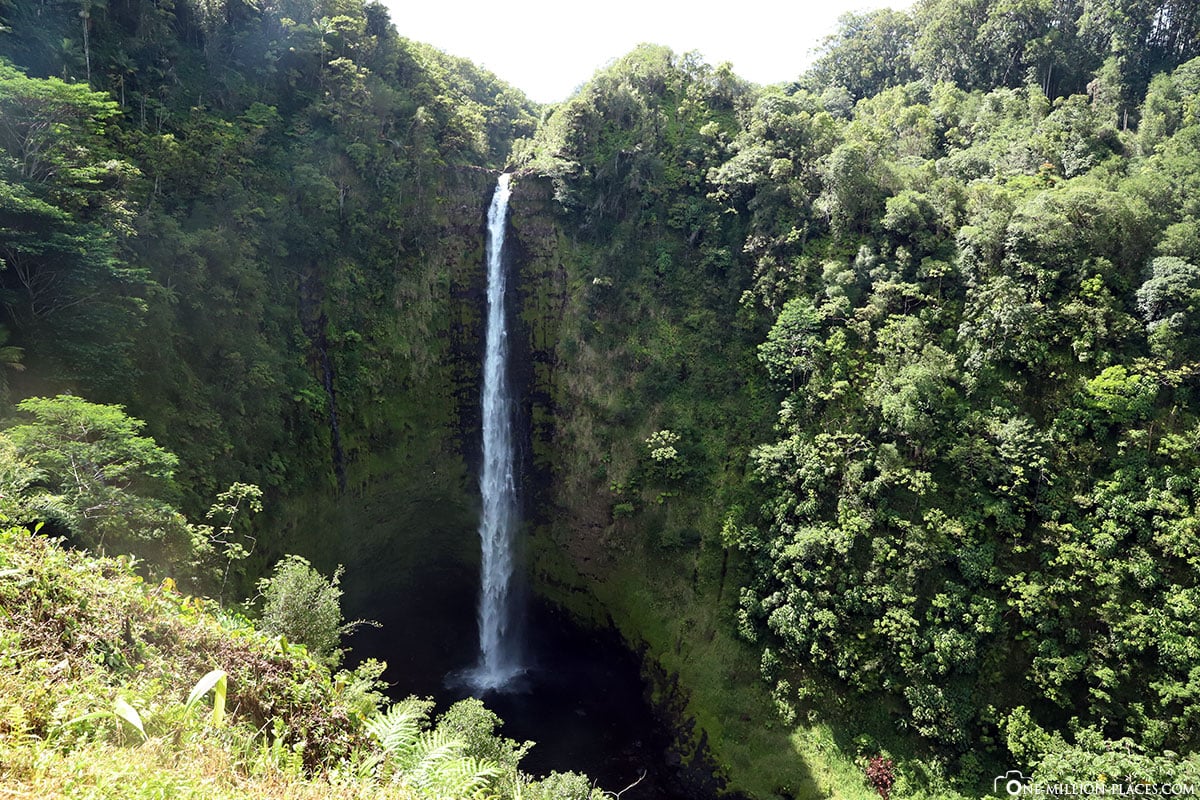 The Akaka Falls on Big Island in Hawaii