After our visit to the Hawai’i Volcanoes National Park we drove the Highway 11 further west, as there are other interesting places here that we had not seen during our last visit during our world tour.

Punalu’u Black Sand Beach is located between Péhala and Nélehu. From the entrance of Hawai’i Volcanoes National Park it is about 45 kilometers or 30 minutes to reach the beach. Directly on the beach there is a small gravel parking lot as well as a little further along the road even a larger asphalted parking lot at the picnic and toilet houses. Parking is free here.

As the name suggests, Punalu’u Black Sand Beach is a beach with black sandthat has a high concentration of black volcanic gas. Such black beaches are created when liquid lava flows into the ocean, quickly solidified by the cold water and disintegrates into tiny particles. The waves then break down these particles into smaller sand fragments and through the currents they are washed back to shore.

The beach is known not only for its black sand color, but also for the sea turtles, which come out of the water at this point and rest on the beach.

And in fact, on our beach visit we were lucky 🙂 Directly on the black sand rested a green sea turtle. There weren’t really many people here on the beach, but to give the turtle its rest, the section around the turtle with red hats was cordoned off by the Beach Guard. After about 10 minutes, the turtle slowly set off again towards the sea.

To get to Papakolea Green Sand Beach, take the Mamalahoa Highway to S Point Road to the end. There is a small gravel parking lot here, which is free of charge. 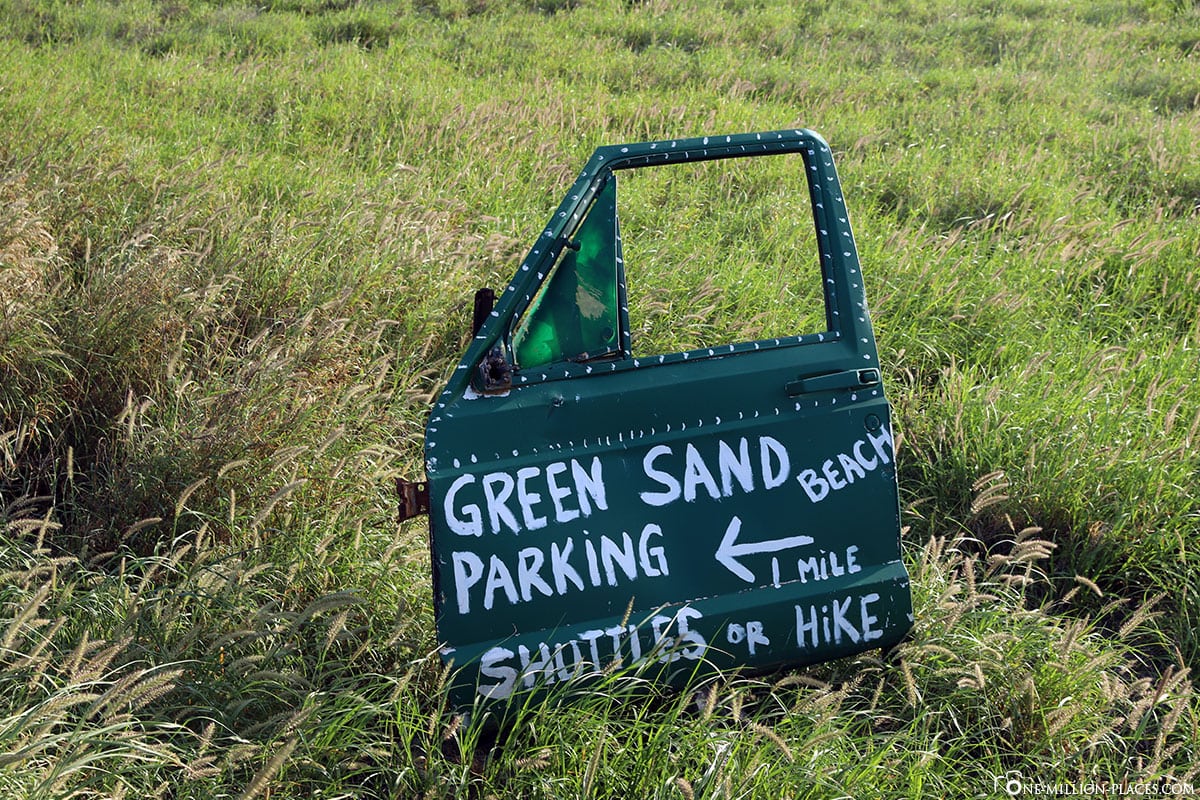 From here you have two ways to get to the green beach. Either you run or you use one of the private pickup shuttles. Directly when you arrive at the parking lot, you will be immediately approached by locals if you want to have a shuttle to Green Sand Beach. Since the price of 20 US dollars per person (back and forth) was found quite high, we decided to run the almost 4 kilometer long distance (one-way). As hikers, we were not alone on the route, but we estimate that about 90 of the visitors use the shuttle service. By the way, it is not recommended to drive the route with your own rental car (unless you have a jeep), as the way is really very sandy and full of big potholes and stones.

The hike goes down sandy paths to the sea and then always along the coast. Again and again the fully occupied pickups met us here or overtaken us. That always looked a bit funny, because on the loading area (!) of the pickups the people stood close together – that reminded us a bit of a cattle transport 😉

After about 1 hour hike we arrived at Green Sand Beach and have to admit that we were a bit disappointed. Yes, the sand shimmered slightly greenish,but we had imagined that somehow a little more intensely. We were even too lazy and too tired to go down the steep slope to the beach, because we still had the 4 kilometer long way back in front of us. So we quickly took some photos and walked back towards the parking lot.

Incidentally, the unusually green hue of the sand comes from olivine crystalsthat erode from basalt (lava). The crystals are heavier than most sand species on the beach and remain behind when lighter grains of sand are washed away by strong wave activity. 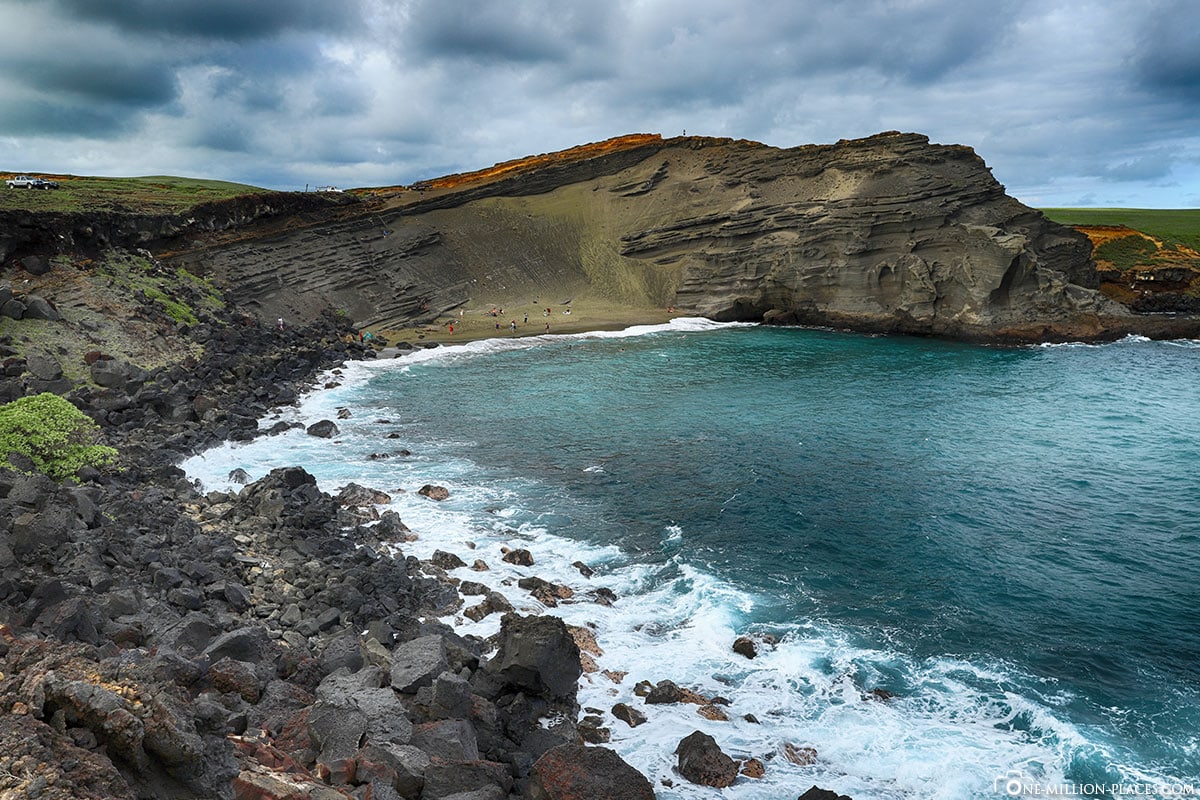 Ka Lae South Point – the southernmost point of the USA 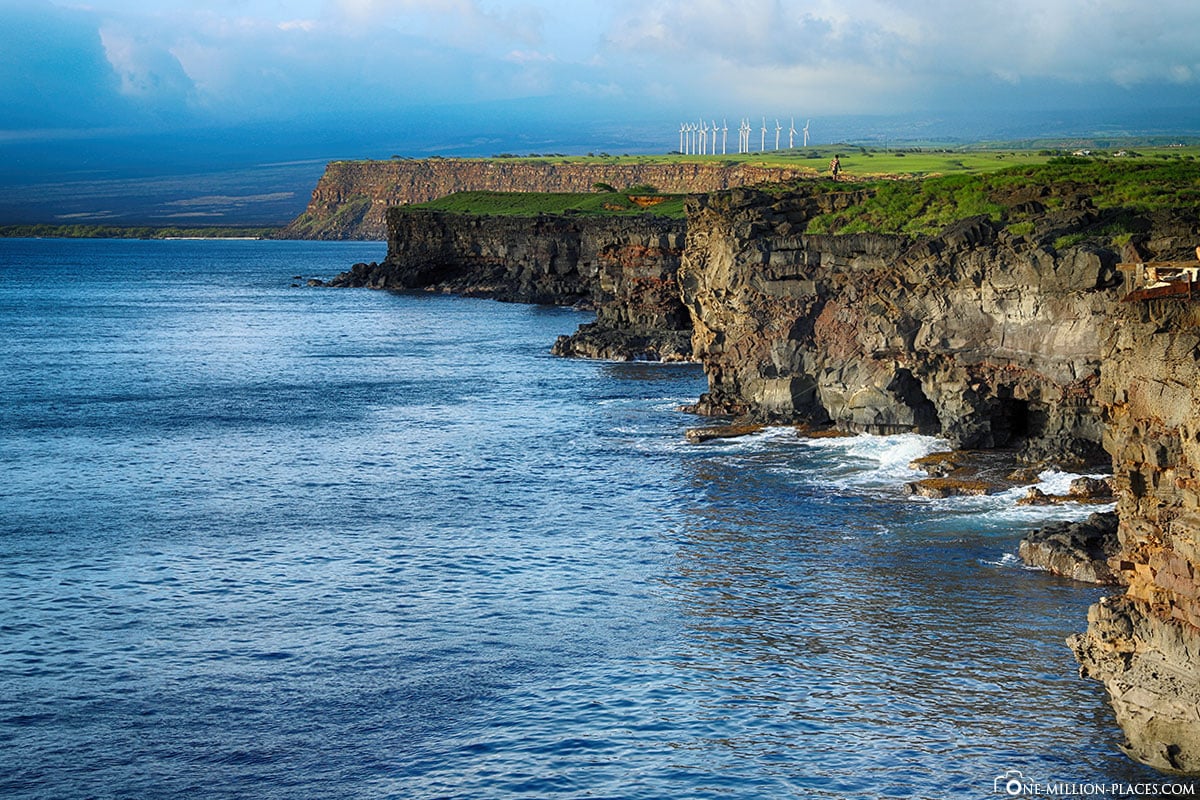