After picking up our rental car at Alamo in Waikiki in the morning, we set out to explore the Manoa Waterfalls and the Tantalus Lookout.

Since it rained quite heavily, we went first to the Waikele Premium Outlets. The outlets are located only about 30 minutes from Honolulu and are the only outlet center on the island of O’ahu. More than 50 shops and a large foodcourt invite you to linger and shop. Perfect so that we could pass the time until it stopped raining. 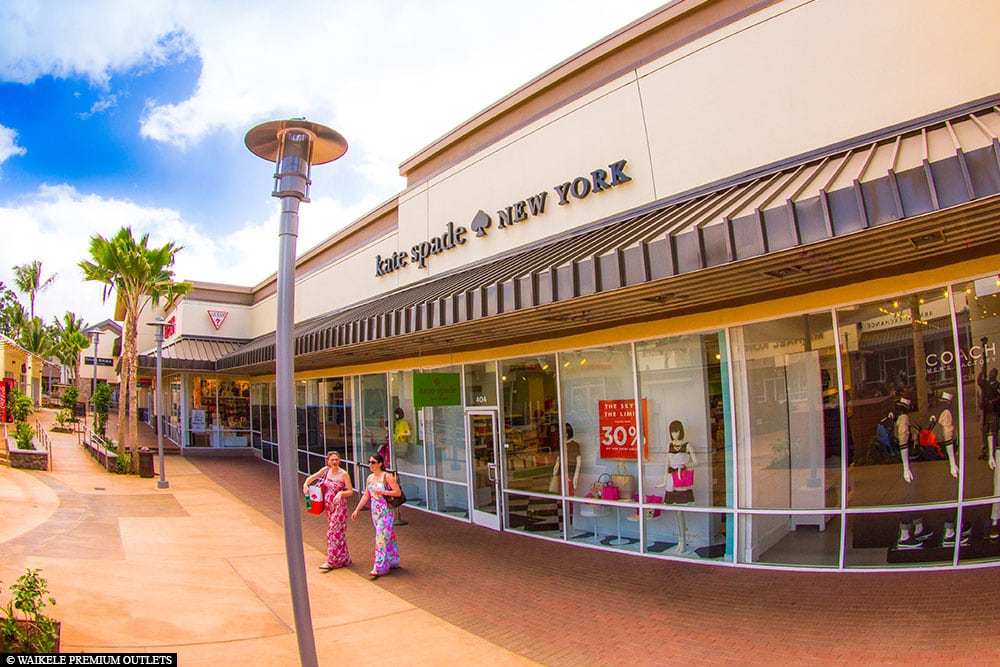 View over Honolulu from Tantalus Lookout

After it had stopped raining around noon, we drove to the Tantalus Lookout. The Tantalus Lookout is an ideal vantage point to admire Honolulu, Waikiki, Diamond Head and the Pacific Ocean. The approximately 15 km long Tantalus Drive winds over Honolulus over countless serpentines and through lush green vegetation into the Pu’u Ualakaa State Park.

Entrance to State Park is free. From a small parking lot, a path leads to the actual lookout point, which is located at the end of the mountain. And even if you walk along this path, you can already see the beautiful skyline of Honolulu and the vastness of the ocean. 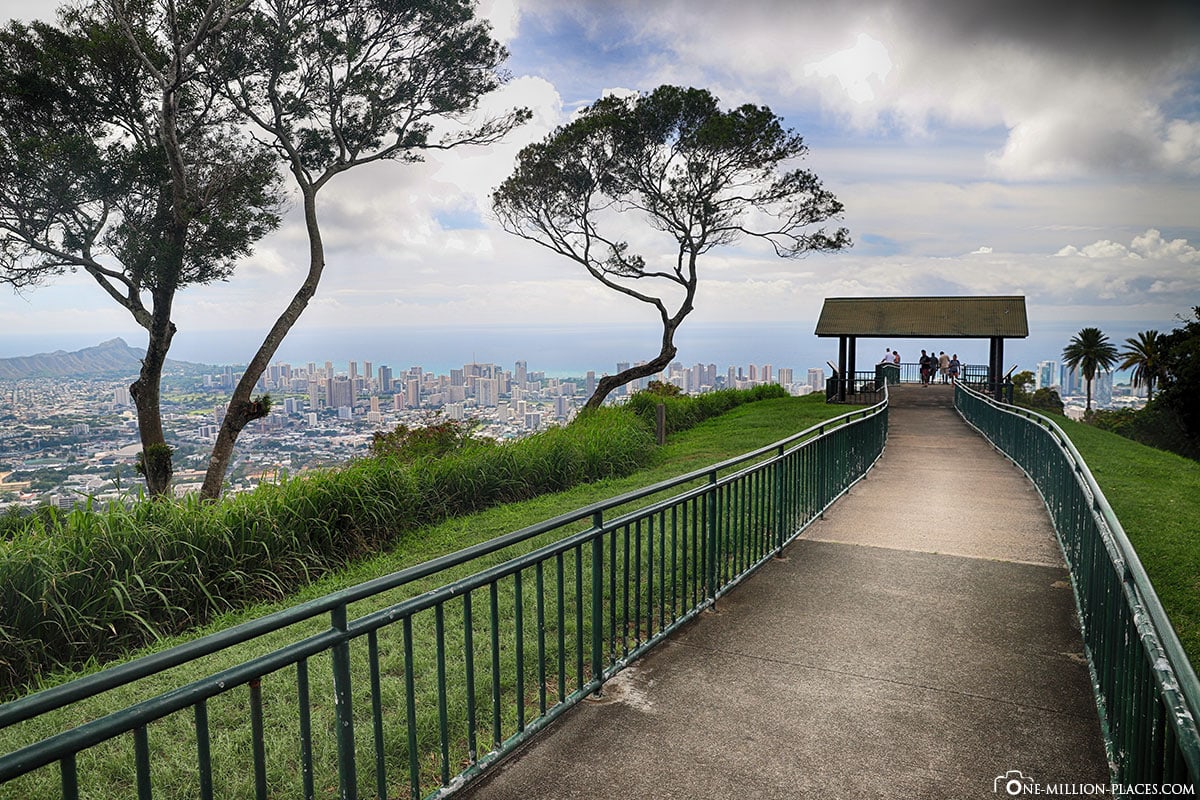 The road to the Tantalus Lookout

The view from up here is really fantastic. You can see the entire city of Honolulu, the hotel skyscrapers of Waikiki and in the background the Diamond Head Crater. In the other direction, the runway of the airport is beautiful to see – and if you stay up here a bit, you can even see planes taking off.

Today we wanted to explore another attraction: the 45 meter high Manoa Falls in the Manoa Valley of Honolulu. The best way to drive is to Manoa Road to Treetops Restaurant. Directly behind it is a private car park, which costs $5 per car. 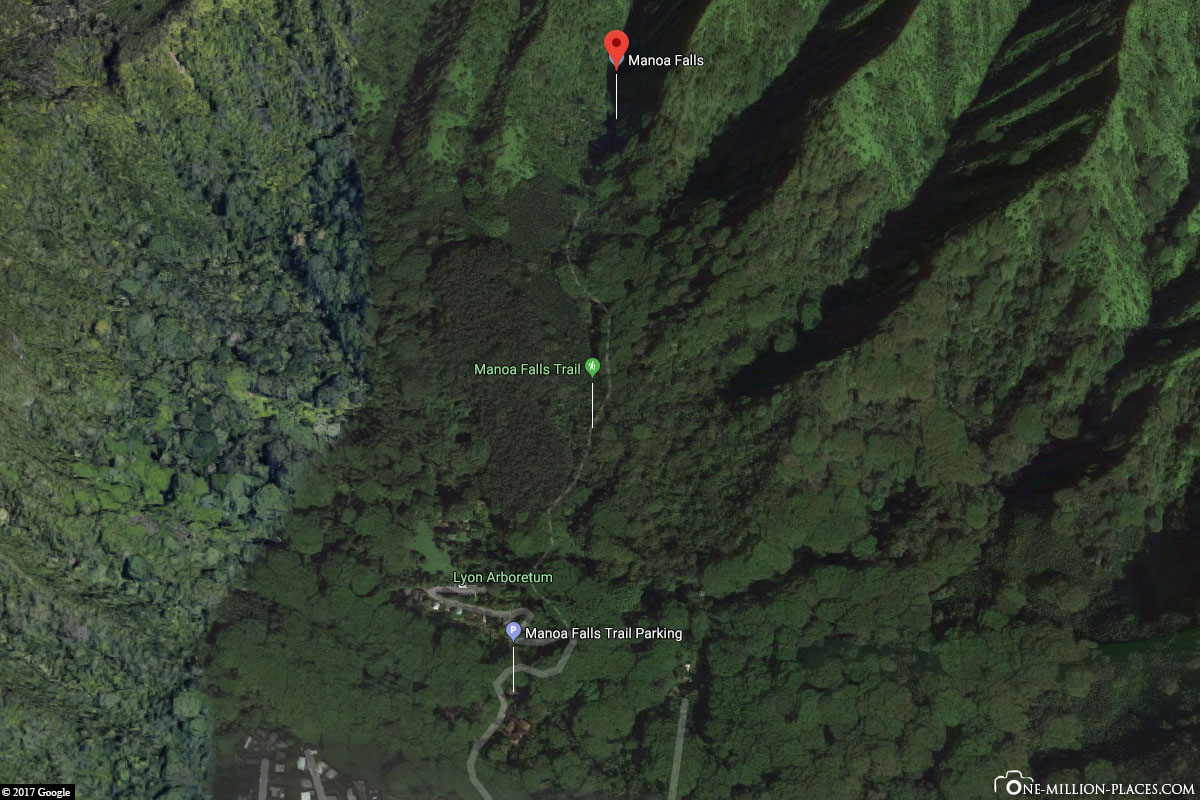 The Manoa Falls in Google Maps

From the parking lot you walk one piece along the road and then come directly to the entrance of the “Manoa Falls Trail”. After a short hike, you suddenly stand in the middle of the jungle. We really liked the lush green of the pans and trees! Every five meters we stopped, looked into the depths of the jungle and were firmly convinced that this must be the Hollywood filming location. The forest scenery was really great.

The very well developed Manoa Falls Trail leads you through bamboo forests, over small bridges and stairs to a beautifully shaped gate of trees.

After about 30 minutes you arrive at Manoa Falls. The waterfall flows into a small water basin surrounded by large stones. Bathing is not allowed here – at least it is on the prohibition signs. At one corner is a small viewing platform from which you have a good view of the waterfall.

Since it started to rain slightly after a few minutes, we just took a few photos quickly and then made our way back. Due to the heavy rains, which often occur here due to the dense tropical rainforest, the soil is often moist and muddy. Accordingly, our shoes looked like this when we arrived at the parking lot again. Luckily, the owners of the car park have set up a small corner where you can spray your shoes with a garden hose 🙂 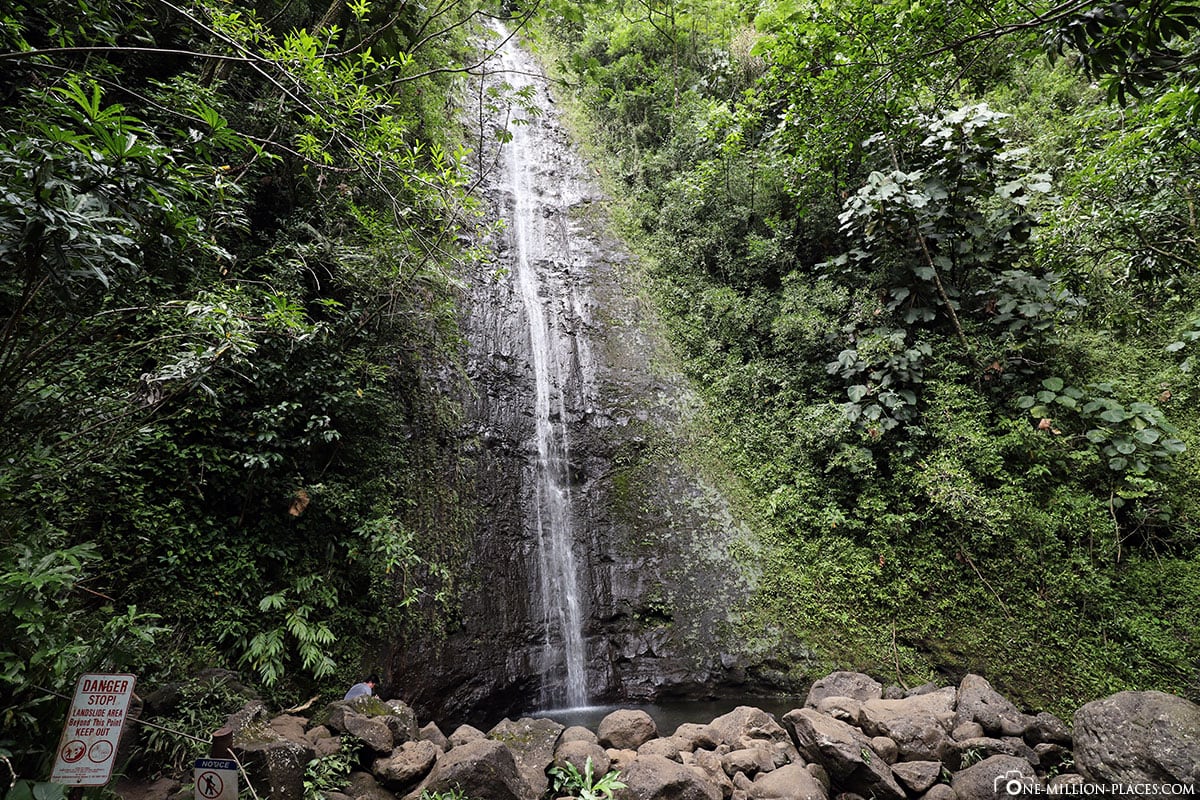 We enjoyed the hike to Manoa Falls very much. If you are looking for a place for an hour-long walk in a breathtaking natural setting, this is the place to be!