After we left the small town of Geiranger and had left the Geirangerfjord, so today there were 2 destinations on our route through Norway’s fjords: First we have a stop in the city Andalsnes made at the Romsdalsfjord and in the afternoon we went on to the town of Molde on the north shore of the Moldefjord.

The journey through the Romsdalsfjord to Andalsnes

It is also known as the Alpine town on the fjord. It is located on the Isfjord, an arm of the Romsdalsfjord, and has a population of just over 2,300. The small town does not really have much to offer in terms of sights, but is a popular starting point for excursions in the surrounding area such as the Raumabahn railway, the Norwegian landscape route Trollstigen, the Rod Church, the vertical rock face Trollveggen and the mountain ridge of Romsdalseggen. The Romsdal region is a paradise for climbers, cyclists, base jumpers and mountain hikers in summer, and a popular ski area in winter. Due to the many nearby massive rocks and mountain walls and some of the most difficult climbing passages in the world, the city of Ndalsnes also bears the unofficial title of the mountaineering capital of Norway. The Norwegian Mountaineering Museum (Norsk Tindesenter) has been located directly at the harbour since 2016, bringing its guests closer to the history of mountaineering in Norway and owning its own large indoor climbing wall.

The AIDA Port Info of Andalsnes

We decided on the 3-hour excursion AND02: Ride to the Trollstigen of AIDA. Our first destination by bus was the Trollwand Trollveggen. The Trollveggen is a total of about 1,700 meters high. The perpendicum part of the wall alone is up to 1,000 meters high and thus Europe’s highest vertical mountain wall. In 1965 the Trollwand was climbed for the first time and today there are more than ten different hiking routes that lead up to the summit.

Who or what are trolls?

Trollers can be seen everywhere in Norway: in souvenir shops, in front of shops and restaurants, at bus stops or at many vantage points. You can buy them almost anywhere as small figures, signs or wood carvings. But who or what are trolls? 🙂

A troll is a goblin, demon and mythical creature of Norse mythology and they are found all over Scandinavia. Long ago, when there were no humans, the trolls ruled the far north along with elves and dwarves. As a rule, trolls are good-natured beings – but they shouldn’t be too annoyed, because they can easily become very angry and then quite violent in their anger.

Trolls live mainly in forests (“forest trolls”) and mountains (“mountain trolls”), but have also been seen in fell regions, lakes, the sea and rarely also in populated areas. Trolls can get very old and their appearance is completely different. They can be several meters in size or even dwarfly small. Trolls often look quite similar to humans: they are hairy creatures, with big hands, mostly big noses and sharp teeth. Some trolls have only one big eye, some have several heads. Trees and grasses often grow on their heads. Most of its kind have a tail, at the end of which there is a tuft of hair. They have only four fingers on each hand and only four toes on each hand.

Trolls are generally quite shy and only active at dusk and at night. If they do not manage to disappear into their mountain in time before sunset, they break apart or become stone. The often mysterious Norwegian landscape with its mighty rocks was therefore largely created from trolls who did not make it to their caves in time…

The following well-known trolls are available:

– the nck, which lives in lakes and ponds in fresh water and the angler or fisherman moves down into his underwater realm
– the Sjotroll, who lives in salt water and supposedly does not mean so well with the fishermen. It can create a terrible storm, smashing boats and ships and has made many fishermen’s wives widow
– the Skogtroll, a one-eyed shaggy forest troll who rips out trees and kills those who venture into the forest after dark. But there are also tiny forest trolls that live under tree roots and like to give hikers a leg
– the Fossetroll lives behind waterfalls
– the nisserswho keep order in the house and yard when they are given small gifts
– the Huldras, female trolls, sweet and golden blond, but always equipped with a cow’s back and a ringtail. They lure men and young men into the forest and no one has yet returned alive
– the Dovregubben is the most powerful troll among all

So be nice to the trolls if you ever meet them, because just as they protect the forest, they will protect you as well. If you encounter an evil troll, always have a bright flashlight with you to turn it into a stone if necessary 😉 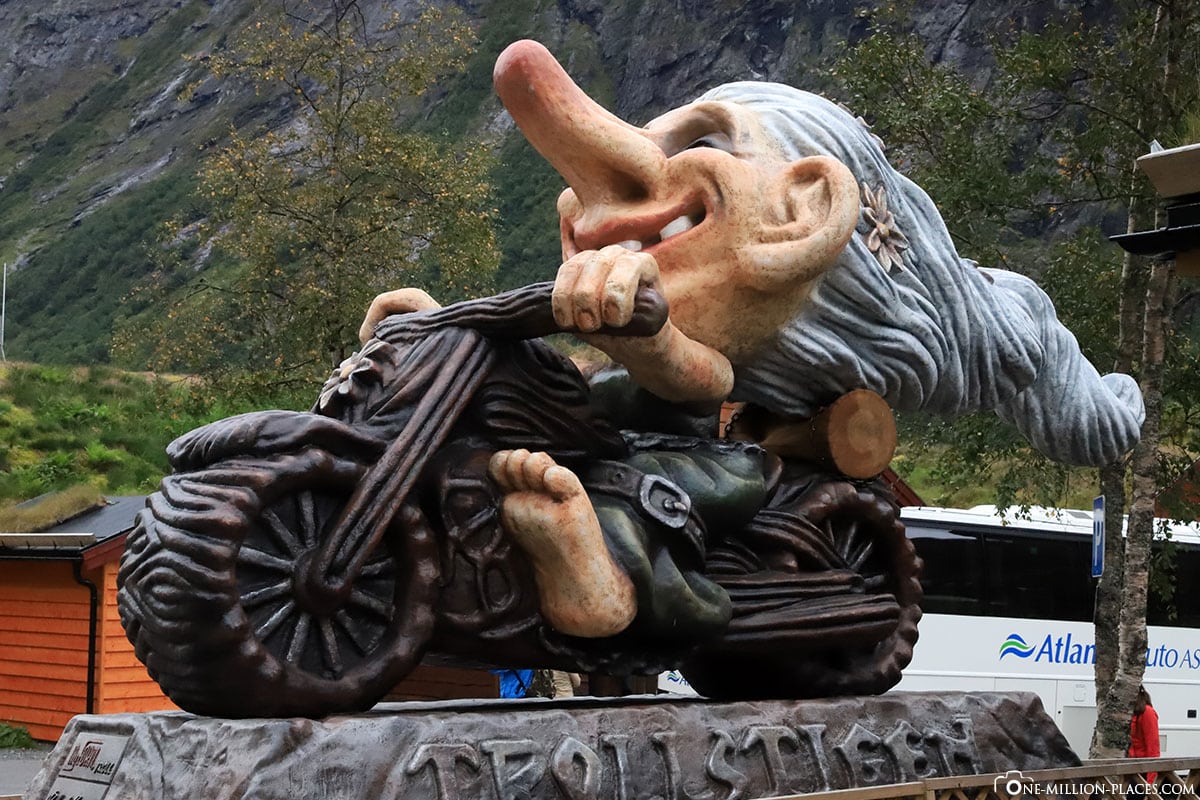 A troll on a motorcycle

The panoramic road Trollstigen, the road of trolls, is a spectacular mountain route. Shortly after the endalsnes, it rises from the Isterdal over a length of 18 kilometers in 11 serpentines with an incline of an average of 12 to the pass height at 700 meters. Depending on the weather, the road can be used from mid-May to the end of September. The panoramic route is surrounded by several 1,450 to 1,700 metre high mountain ranges with majestic names such as King, Queen or Bishop. 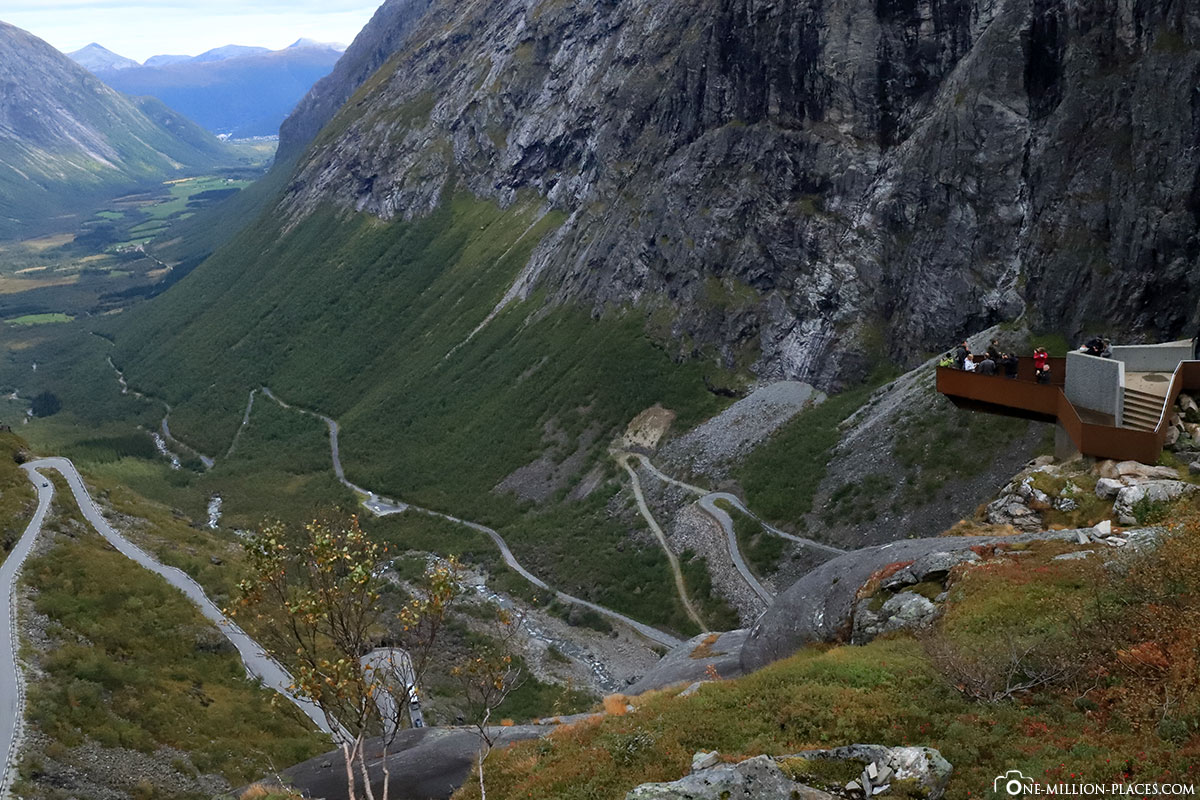 The serpentines of the panoramic road Trollstigen

About halfway along the panoramic road you reach a beautiful natural stone bridge. Here, the 320-metre-high Stigfossen waterfall winds its way down the slope down to the valley.

The observation deck on the Trollstigen

At the pass height of the panoramic road Trollstigen there is a small visitor center with a large parking lot. From there, extended paths lead to 2 different viewing platforms:on the left there is a short way to a lookout point above the Stigfossen waterfall and on the right a 500 meter long path leads to the Utsikten (view) – a platform above an edge, 200 meters above the Trollstigen. From here you have a beautiful view over the many serpentines and the valley up to the fjord.

By the way, admission to the viewing platforms is free of charge.

The train cappella in Andalsnes

When we were back on the ship at 12.30 p.m., we had a short time to look at the train chapel in the town of endalsnes. It is located directly at the train station of the town of ndalsnes, which is located directly at the pier of the cruise ships. The ‘Church on Rails’ is an old railway wagon, which was set up like a church – the altar consists, for example, of discarded railway sleepers. However, there are no divine services in the Zugkirche; the place is simply to offer people silence and peace.

The railway chapel was consecrated by the bishop in 2003 in the presence of King Harald and Queen Sonja. Admission is also free here.

That was already our short stay in the town of ndalsnes. Now we move on to the next destination: Molde. 🙂 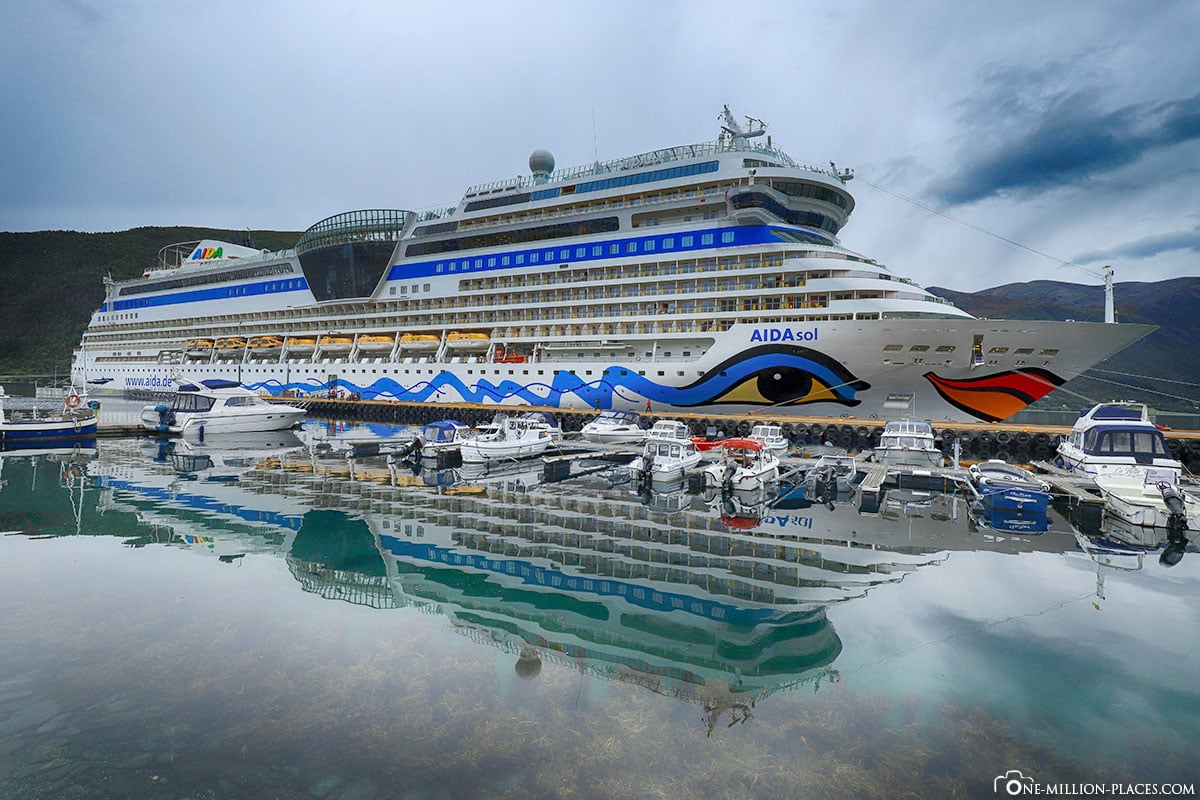