Already at 6.30 o’clock today we set off on the 180 km long way to the ice caves of Vatnajökull in the Skaftafell National Park. We had happened to see some pictures of the caves on the internet (The Most Breathtaking Natural Places In The World) and were so excited about it that we really wanted to see it.

Day
3
of our trip around the world

The trip to Skaftafell National Park

After a three-hour drive from the small town of Vellir with our rental car under difficult (due to the weather) conditions, we arrived on time at the agreed meeting point in the southern part of skaftafell National Park. Two Chinese, two Canadians and an Austrian went on tour with us. In the replacement jeep (the actual jeep “won’t make it – too much snow“) we drove 20 km along a normal road, until it suddenly went off-road across the snow-covered landscape of Iceland. At the latest here, every normal car would have failed miserably because of the many snow. After about 4 km we stopped in front of a small dark cave entrance, to which we (equipped with helmet and headlamp) had to stagger through deep snow.

Things to know about the Ice Caves

Walkable glacier caves made of ice are a fascinating wonder of nature and therefore extremely rare to find. The ice caves in Iceland can only be visited in the winter months from the beginning of November to the end of March. In summer, running meltwater forms caves under the glacier. The deep blue colour of the ice is due, among other things, to the incredible pressure that weighs on the ice.

As the caves in the ice change from year to year, local guides from the area are looking for new caves every autumn. The (not quite cheap) tickets for access to the ice caves should be secured in good time, as the capacity is very limited and the demand is quite high. We had already secured our tickets at the beginning of October through Local Guide of Vatnajökull, when the sale of the tours for this year was just starting 🙂

The blue glacier caves of Vatnajökull

The Vatnajökull (“Water Glacier”) is the largest glacier in Iceland and also the largest glacier in Europe outside the polar region. Its ice volume is estimated at over 3,000 km3 and has a thickness of up to 900 meters. In 2008, the area of the glacier was incorporated into the newly founded Vatnajökull National Park, which has since become the largest national park in Europe. In order to get into the actual part of the ice cave, we had to bend at the beginning and later even crawl over the ice and the snow on all fours 🙂

What awaited us was just fascinating. The ice that arched over us shone in a variety of shades of blue – as in the pictures we had seen beforehand. The individual caves went deeper and deeper into the mountain massif and there were always ceiling breakthroughs. Some ice caves were really high, while others were very narrow.

We had enough time to explore the individual cave chambers ourselves, crawl through different ice tunnels and take many photos. 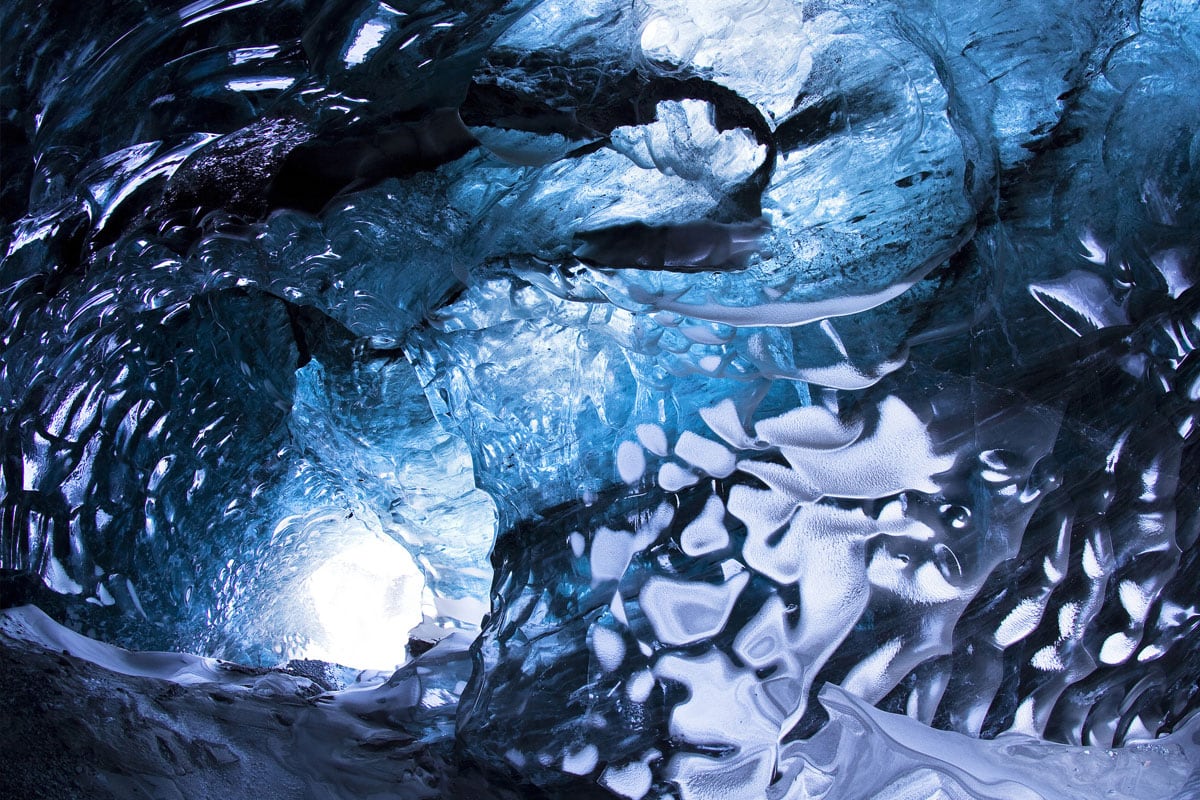 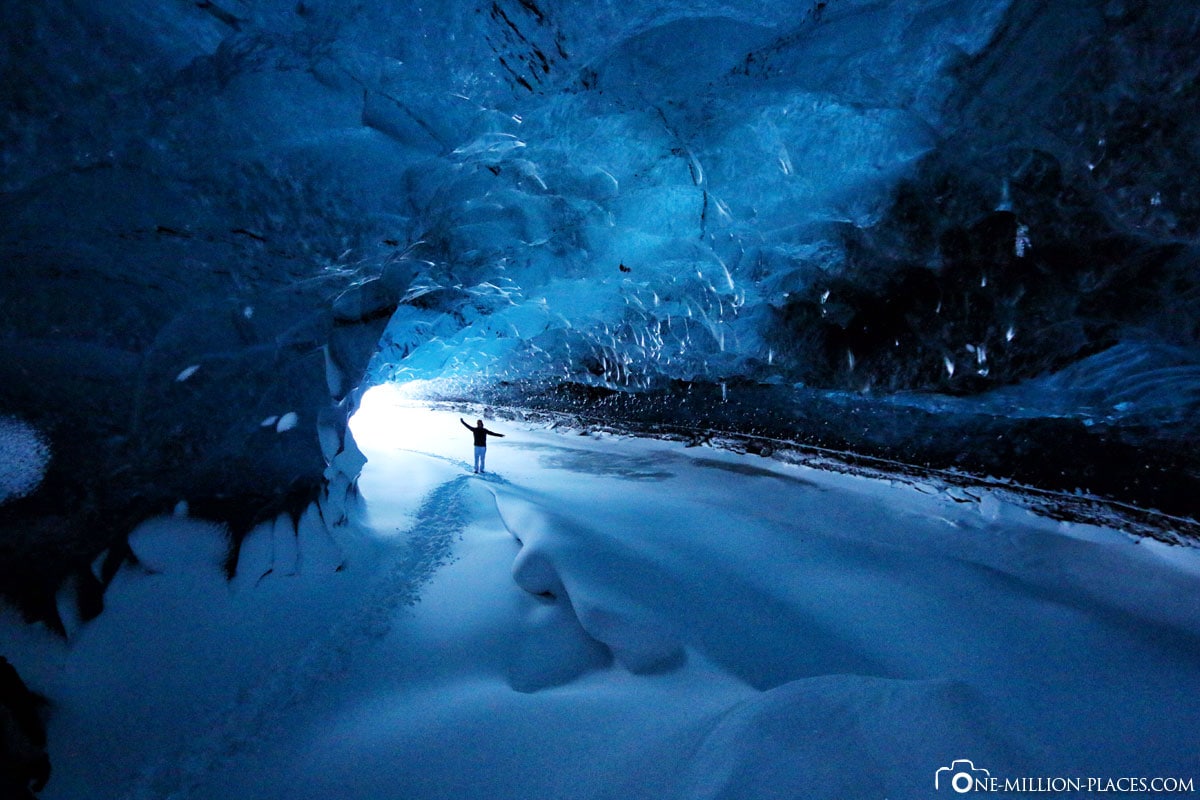 One of the great caves

After a good 2 hours we went back to the Jeep. But even for the Jeep, the snow was too high in some places on the way back, so we got stuck twice. So it was: get all out, shovel snow and push.

Skogafoss Waterfall on the way back to Reykjavik

After 3.5 hours we had arrived back at our starting point. Now we had the long drive to Reykjavik (approx. 350 km) with a short stopating at the waterfall Skogafoss. 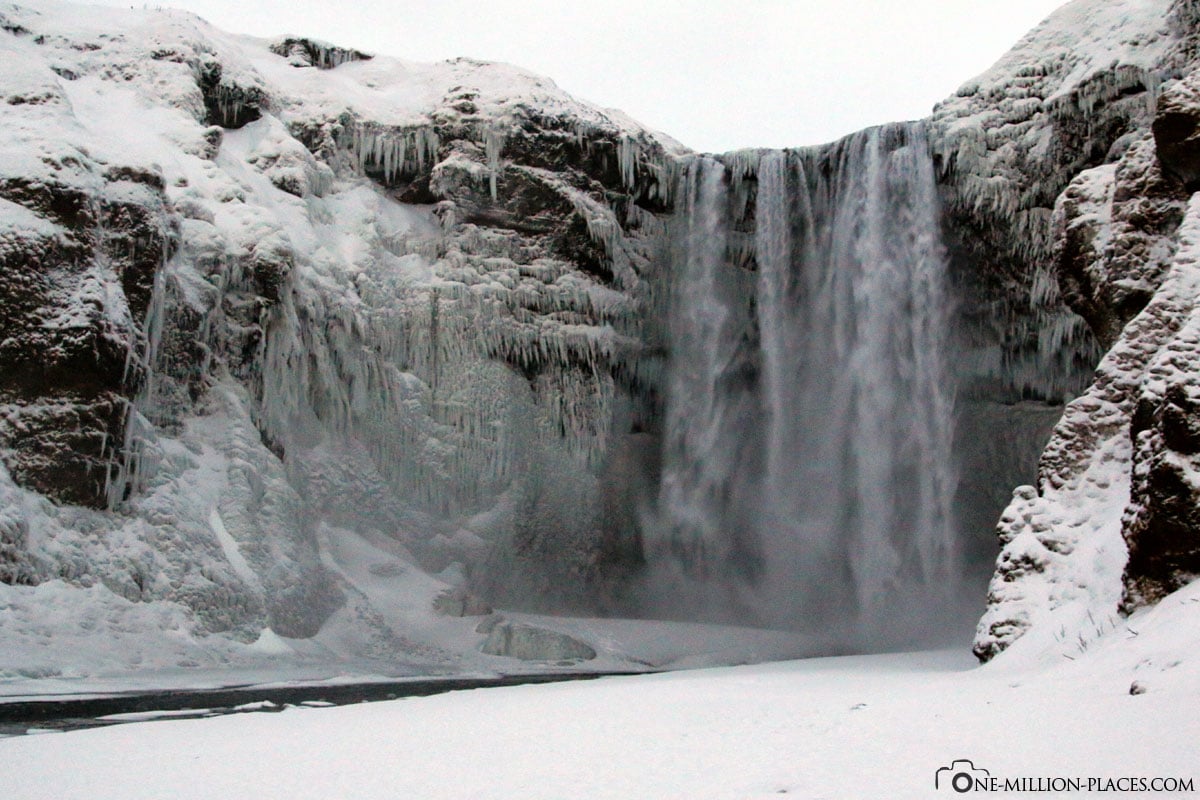 On the route, we got to know all the weather phenomena of Iceland – from bright sunshine to hurricane-like wind gusts to strong snowstorms with visibility of less than 2 meters.

Shortly before it got dark we arrived at our accommodation CenterHotel Skjaldbreid in Reykjavik.

We chose this hotel because of its central location in Reykjavik. Parking is possible right in front of the door, if something is free even free from 6 pm to 9 am, otherwise via the parking meter. We got a free upgrade to a larger room, which was very spacious and clean. However, it was very noisy as the rooms went directly to the street – so prefer to take out a room at the back. Breakfast was great – there was nothing missing. WIFI also worked without problems. 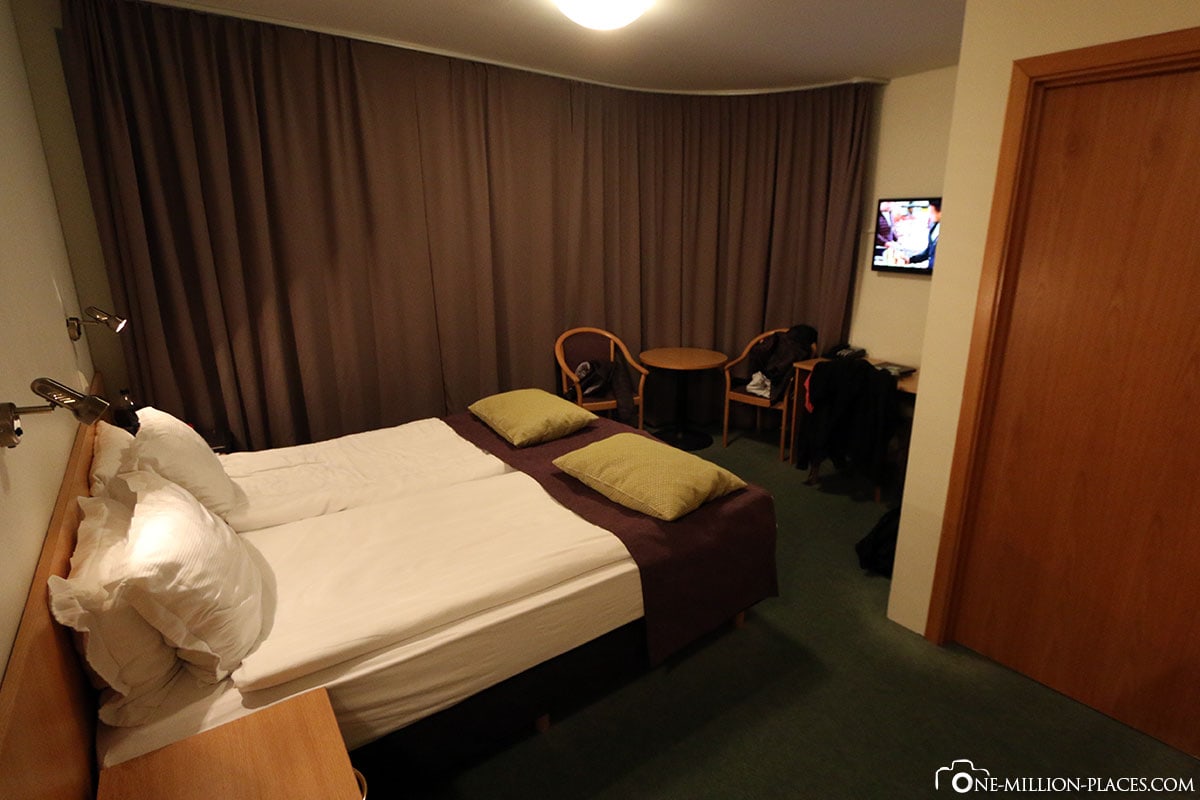 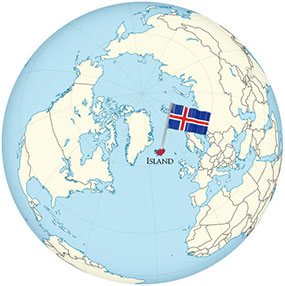