After 2 nice days in Hanoi and Halong Bay we took the bus directly to the train station in Hanoi, from where in the evening our 13-hour train journey started on the night train to Hue.

The night train from Hanoi to Hue

We have never slept on a train before and were all the more excited about what to expect on the train journey from Hanoi to Hue. About an hour before departure we arrived at the train station in Hanoi with our Gebeco tour group, so we still had enough time to get something to eat. In Hanoi Station there is a small snack shop “VinMart” as well as a small baker/sandwich shop. Since we didn’t know if there would be food on the train, we preferred to cover ourselves with a few snacks as well as instant noodle soups as a precaution.

About 30 minutes before the departure of the train, our tour guide handed out the train tickets and the boarding was able to start. Since there are 4-person sleeping compartments on the train, we were able to choose with whom we would like to share a compartment from the tour group or were simply allocated. On the train tickets were the corresponding wagon, compartment and sleeping place numbers on it, so we went in search of the right compartment. There wasn’t that much going on at the station, so we quickly found our way without crowds.

The 4-sleep compartments surprised us positively. On the left and on the right there was a lying surface at the top and bottom – equipped with a duvet, a pillow (both were welded in foil) and a small packed lunch. In the middle was a small table with a lamp, a flower vase and a basket with water, juices, toothbrush sets, waffles and refreshment towels. Of course, the compartment was very small for 4 people, but the equipment and food had actually surprised us. But there was a small problem when it came to storing the suitcases. Not all of them fit under the two lower couches due to the size, so we had to put two suitcases under the table. What was very positive, however, was that there were USB sockets on every couch and that we were able to charge our mobile phones.

After we had eaten our instant noodle soups, we first looked around in the wagon, what there is here. To anticipate: Not much 😉 There was a closed toilet, which was shared with 25 people in the wagon and therefore after a few hours it didn’t look quite hygienic. There was also a separate sink that could be used for brushing your teeth or washing your face. Amenities such as a shower or similar are not available on the train.

In the evening and in the morning, train attendants came by the train, which offered various snacks, but e.g. have also sold hot coffee or instant noodle soups. For the soups there is a hot water boiler in each wagon, where you can take hot water free of charge.

Around 11 p.m. we tried to lie down and it worked out more or less well. The train was of course very loud and it always jerked, so we found it a bit difficult to sleep. But the bad air in the compartment bothered us the most. Unfortunately, you can’t open the windows throughout the train and the air conditioning didn’t work properly either, so it got warm and stuffy over time. We don’t want to imagine what it’s like in midsummer. With the sleep it worked out quite well, so that we arrived in Hue the next morning not completely unsleep.

We arrived at the train station in Hue at 8.30 in the morning. Our Gebeco tour guide Thuan Nguyen was already waiting for us here, so that we could board the coach directly. The next stop was our hotel in Hue, where we slept for one night. Here we had the opportunity to have breakfast extensively and to get fresh for a short time before our trip to the imperial city started. 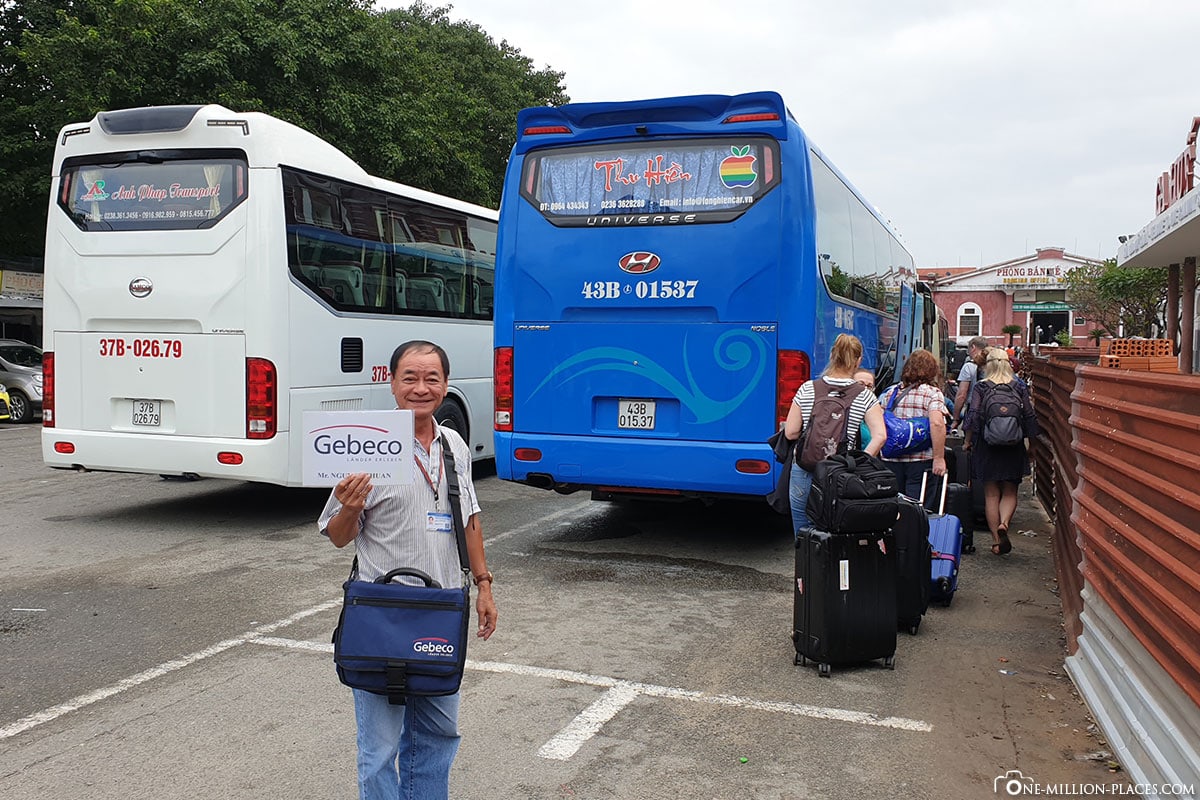 Reception from our guide in Hue

The Park View Hotel in Hue

For one night we stayed at the Park View Hotel in Hue. We found our twin room very spacious, there was even a small balcony. The location of the room was right next to the elevators, but we did not notice any increased noise. The bathroom was also well equipped with a bathtub, hairdryer and various bathroom amenities.

Breakfast was included in our stay and was offered on the top floor. We were pleasantly surprised by the offer, because the selection was really good: from various hot dishes, to freshly sliced fruit to cold cuts and cornflakes/cereals/cereals. Especially beautiful was the outdoor area of the restaurant, from which one had a beautiful view over the city.

In the evening we were eating in the nearby food court (see Google Maps) of a large cinema, which was cheap, clean and tasty.