A visit to Halong Bay is not to be missed on the sightseeing list when travelling in the north of Vietnam. Because it is one of the absolute highlights of a visit to Vietnam and is one of the seven wonders of nature.

Things to know about Halong Bay

Halong Bay is located about 180 km east of Hanoi and is located in the Gulf of Tonkin. The name (Vénh H’Long) means “Bay of the Diving Dragon”. Halong Bay describes an area of about 1,500 km2 with a 120 km long coastline, in which about 2,000 limestone rocks sometimes rise several hundred meters high from the water. It has been a UNESCO World Heritage Sitesince 1994.

By bus from Hanoi to Tuan Chau

The day trip to Halong Bay was part of the program of our typical Vietnam trip with Gebeco, so there were no separate costs. In the morning at 7 o’clock we started at our hotel in Hanoi and our bus was moving east. The trip to Tuan Chau – an island in front of the town of Ha Long – took about 3 hours, including a 10-minute break. The Tuan Chau pier is the official gateway to Halong Bay, from where both day tours and overnight trips to Halong Bay start.

Our boat tour in Halong Bay

A boat trip through the almost unreal landscape is one of the most popular attractions in Ha Long. From the boat you can really experience the Halong bay, in which you drive over the emerald-green water past the numerous limestone rocks.

Our 26-strong tour group had a whole boat on their own, which was really nice. There was enough space for everyone – whether under deck or on the sun deck. When we left the pier at around 10.15 am, the weather was at its best: there was plenty of sun and a beautiful blue sky.

For about an hour we cruised through the bay, partly you past the limestone rocks. With us some boats have entered the bay – that Halong Bay is a real tourist magnet, we had already noticed on our last visit here.

We made the first stop of our tour on Bo Hon Island at the Sung Sot Caves. This limestone karst grotto was discovered by the French in 1901 and was originally called the “Grotte of Surprises”. It is located about 25 m above sea level and covers an area of about 10,000 m2.

From the jetty you climb about 50 steps to the entrance of the cave. Once here you will be rewarded with a beautiful panoramic view of the bay in front of you. 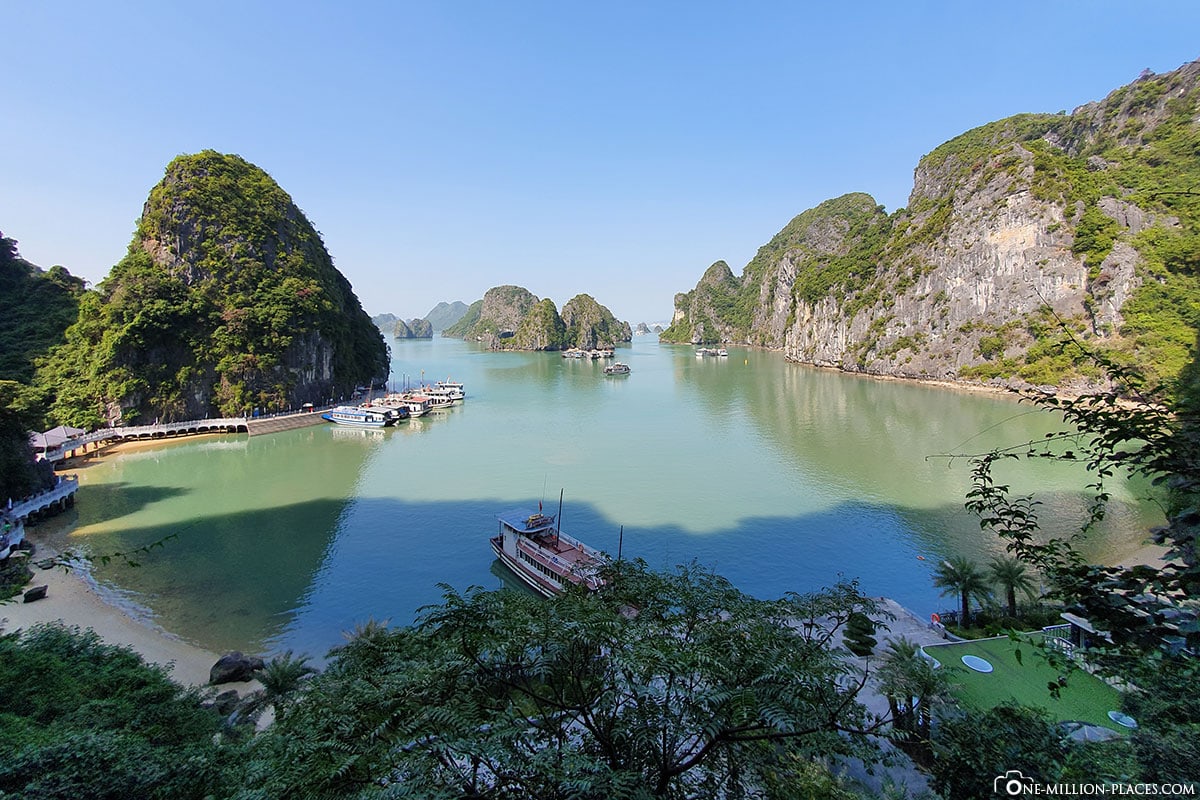 The Sung Sot cave system includes several adjacent caves. The first cave is about 30 meters high. From here you have access to a larger, second chamber, which can be reached via a narrow path between the two caves. If you walk along this small path and then enter the second chamber, the nickname “surprise cave” becomes clear to you, because a huge cave appears, which could hold thousands of people at the same time. Above and below, impressive stalactites and stalagmites extend, sometimes stretching from the floor to the ceiling. There is also a winding path around the chamber from which you can view the cave from different angles. 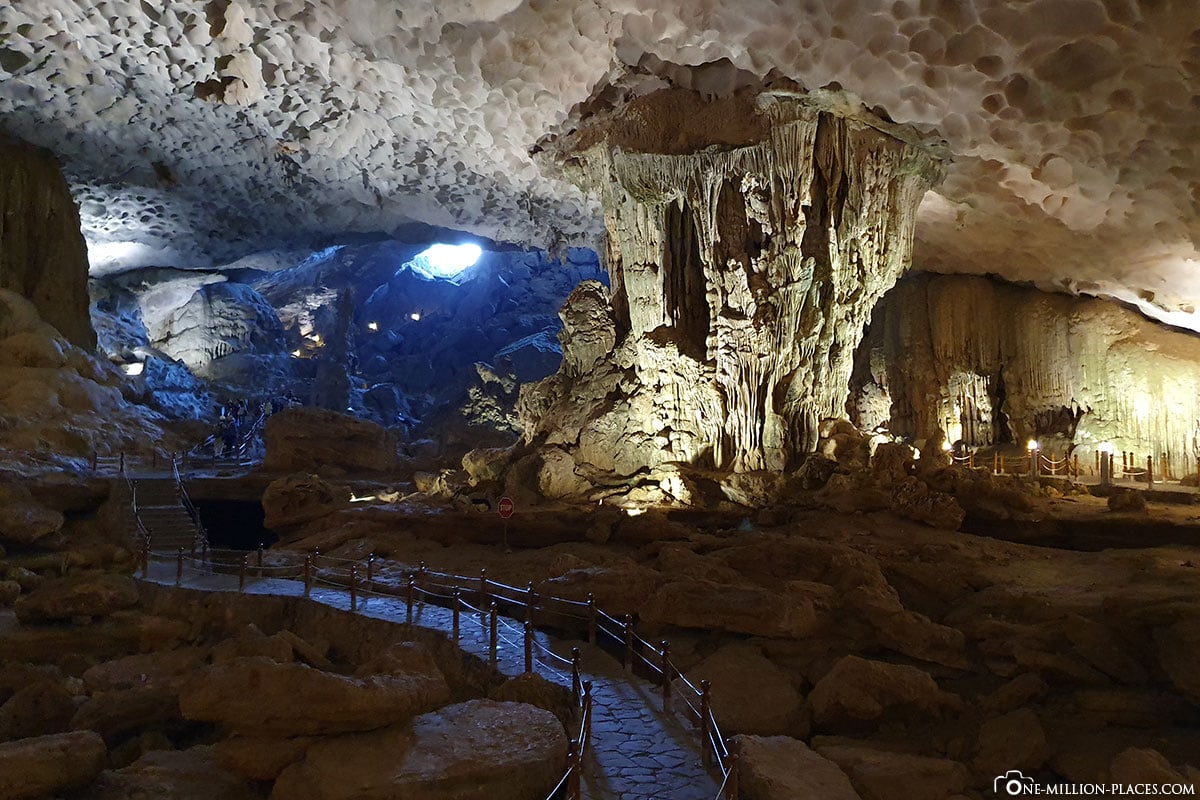 The view from Ti Top Island

After visiting the cave there was a delicious lunch back on board consisting of fish, meat, vegetables and rice. Well strengthened we reached our second stop a short time later.

Already on the approach to the Ti Top island, we have already seen the many boats and people, because a visit to the island – just like the cave – belongs to the standard program of almost all boat tours. Our guide gave us exactly 20 minutes to stay on the island. Far too short! Because on the island there is a beautiful viewpoint, which you have to climb first. And that’s what we really wanted! So we tormented ourselves with a hundred other tourists up the mountain, but the effort was definitely worth it: from above we had a magnificent view of the bay and could enjoy the view at least for a few minutes. But since we were a bit in need of time, we went down again very quickly, so as not to be back at the boat too late. We took 30 minutes instead of the 20 minutes, but we weren’t the only ones in our group who were on the lookout 😉

When everyone was back on the boat, it was called “Leinen Los” towards the harbour. It was a beautiful day in Halong Bay, even if the sky had closed a bit at the end.