In addition to the most famous places Fira and Oia, the island of Santorini has much more to offer. Among other things, we visited the archaeological site Of Akrotiri, the Black Beach of Kamari and an old winery.

The new port of Santorini (Port of Athinios)

In the morning we were picked up by a transfer boat on our cruise ship Celestyal Crystal and taken to the new port of Thira (Port of Athinios). In contrast to the old port of Thira, from which the cable car goes up, a winding road goes up from the new port to the edge of the caldera. This means that from the new port all the bus tours for the island start and here also arrive sit the ferries, which offer day trips from the other islands to Santorini. There have already been 30 buses waiting for the tourists of cruise ships and ferries. Our group of 8-strong travel bloggers got their own bus, which was super handy, because we weren’t dependent on larger tour groups (where everything usually takes a little longer). 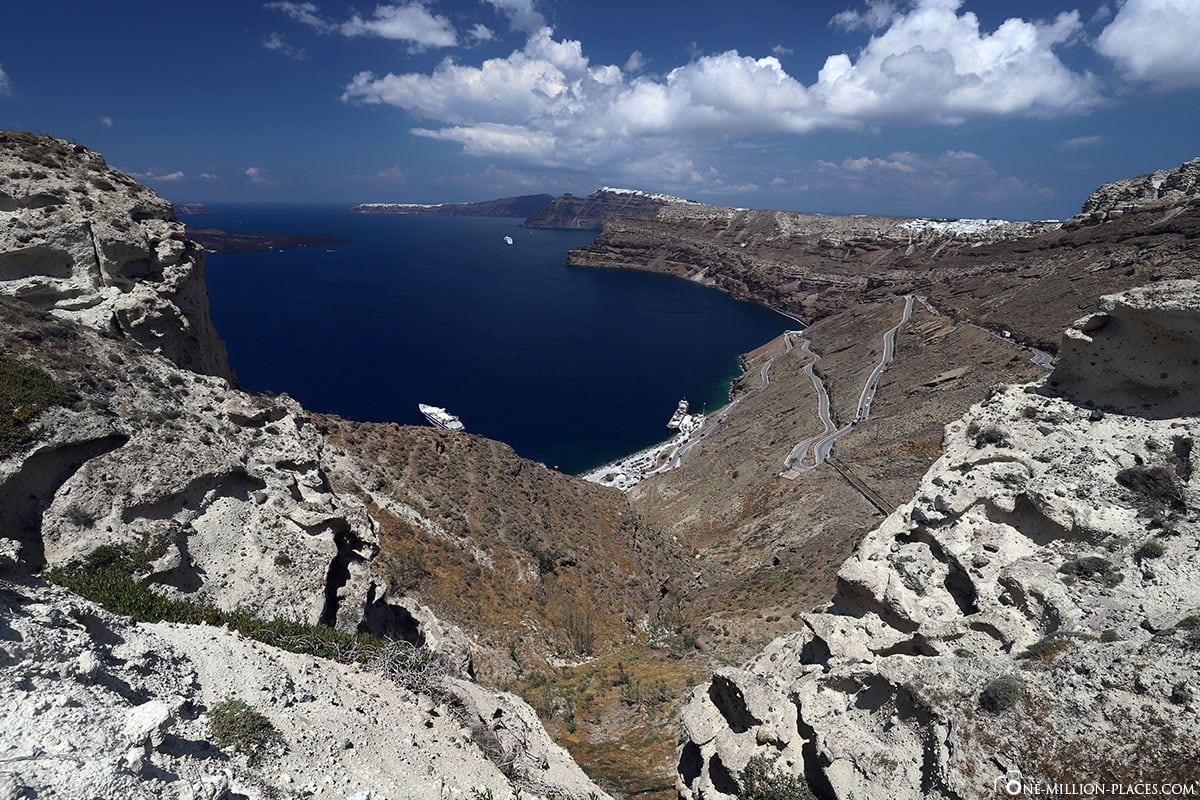 View of the new port and the Caldera

The archaeological site of Akrotiri

Our first destination was the archaeological site Akrotiri, which is located in the south of the main island of Thira. Akrotiri is a prehistoric city covered by the ashes of the great volcanic eruption of 1627 BC. In 1967, the excavations in Akrotiri were systematically started to prove an old theory. And in fact, many finds were found here, which can be seen in today’s exhibition hall.

A system of wooden bridges allows you to walk through the hall and take a look at the various excavations To watch. The circular trail leads from the south along the largest complex of houses to the main square of the former city, over the longest road uncovered to date up to two small squares. During the tour, for example, you can see that the former settlement had a very well developed infrastructure and a sophisticated sewage system. During the excavations, imported products could also be found in the buildings, which proves that the city was very well developed. However, the growth of the city abruptly ended at the end of the 17th century BC, when the inhabitants packed their belongings due to strong earthquakes and left the island. A short time later, the volcano erupted and buried the city and its contents under volcanic material – until excavations began after more than 3,500 years.

So far, only a fraction of the former much larger urban area has been uncovered. The excavations so far do not shed any conclusion as to how large the city once was and how many inhabitants lived in it. Scientists estimate that the city had a population of 2,000 to 9,000.

The village of Akrotiri

The archaeological site of Akrotiri was named after the present-day village of Akrotiri, which is located only about 700 meters northwest of the excavation site on a hill. After visiting the excavations we made our way to the small village. The image of the village is characterized by the ruins of a castle complex dating back to the period of Venetian rule (13th to 16th century). We walked up to the castle and had a wonderful view of Santorini from above, recognized the excavation site from afar and could see the villages on the edge of the caldera. There is not much else to see in the village. There are some very nice guesthouses, but otherwise it is relatively quiet here.

On Santorini, wine growing has a long tradition. Although the area under cultivation has been significantly reduced in recent centuries, the wine produced on Santorini is still one of the best in Greece. The island produces a large number of high quality wines, mainly dry or sweet white wines.

By the way, the wine-growing on Santorini is somewhat extraordinary or different from that in Germany. The vines grow on a mixture of volcanic rock, limestone and bimstone. As a result, the soil has little organic matter, but is rich in essential minerals, resulting in wines with a naturally low pH value and high acidity. And that is probably also what makes the wine on Santorini so distinctive. During the rainless summer season, the vines get their water needs from the humidity that condenses in the morning on the leaves and on the ground. The vines are usually pruned in such a way that they often spread around each other directly above the ground. This allows the grapes growing inside to be protected from rough winds. You can see that the wine-growing in Santorini has a sophisticated system. The winegrowers have managed to ensure that the wines from Santorini have been awarded a seal of protection for the highest Greek quality level.

In order to get an idea of the wines for our tour group, a wine tasting at venetsanos Winery was on the agenda. Built in 1947, the winery is located directly above the new harbour on the edge of the caldera. A member of staff first told us about the history of the winery and the techniques of winemaking and then guided us through the winery. Afterwards there was something for the palate: we could taste three different types of wine and enjoy a few snacks. But the best part of the whole thing was the view: the sun terrace on which we had our wine tasting offers a breathtaking view of the caldera and the surrounding volcanic islands. Just wow!

The Black Beach in Kamari

On Santorini there are a variety of beaches. Since the island is of volcanic origin, you will find here – next to a red beach – mainly black beaches. At one of them we also made a short stop to hang our feet in the cool water in the sunny weather. In the seaside resort of Kamari, which is located southeast of Fira, there is a beach that is about 4.5 km long and 200 m wide and is completely covered with black pebbles. The accompanying seafront promenade offers a mix of bars, restaurants and souvenir shops.

A map of Santorini

In this Google Maps map we have mapped all the sights of Santorini that we visited in our 2 days on the island: