The island of Santorini (or Santorini) has been on our bucket list for a few years now. So we were very pleased when we saw that the island is on the program as part of our 7-day cruise with Celestyal Cruises through the Aegean Sea. Best of all, the Celestyal Crystal stays on reeds for a full two days compared to other cruise operators. Simply perfect 🙂

The island of Santorini

On Instagram or Facebook you can’t miss the many beautiful pictures of Santorini. No wonder, because Santorini is considered a top destination in the Mediterranean and the world and attracts 2 million tourists a year.

Santorini is a group of islands in the south of aus 5 Inselnthe Cyclades. The well-known main island of Thira as well as Thirasia and Aspronisi form the ring of a water-flooded caldera,in the middle of which lie the two islands Palea Kameni and Nea Kameni. The islands were once formed by volcanic activity. Each of the 12 eruptions caused the central part of the volcano to collapse, creating a large crater. The last major volcanic eruption took place 3,600 years ago and covered the three islands with ash, bimstone and lava. Leaking gases created a huge vacuum that led to the collapse of the central part and the formation of a huge boiler – today’s caldera – with a size of 8×4 km and a depth of up to 400 meters below sea level. The most recent volcanic activity on the island took place in 1950. At that time, the volcano erupted on the island of Nea Kameni, which is now located in the middle of the water-filled caldera. The different layers of the volcanic eruptions can still be seen very well today, if you look at the rock faces of the main island. 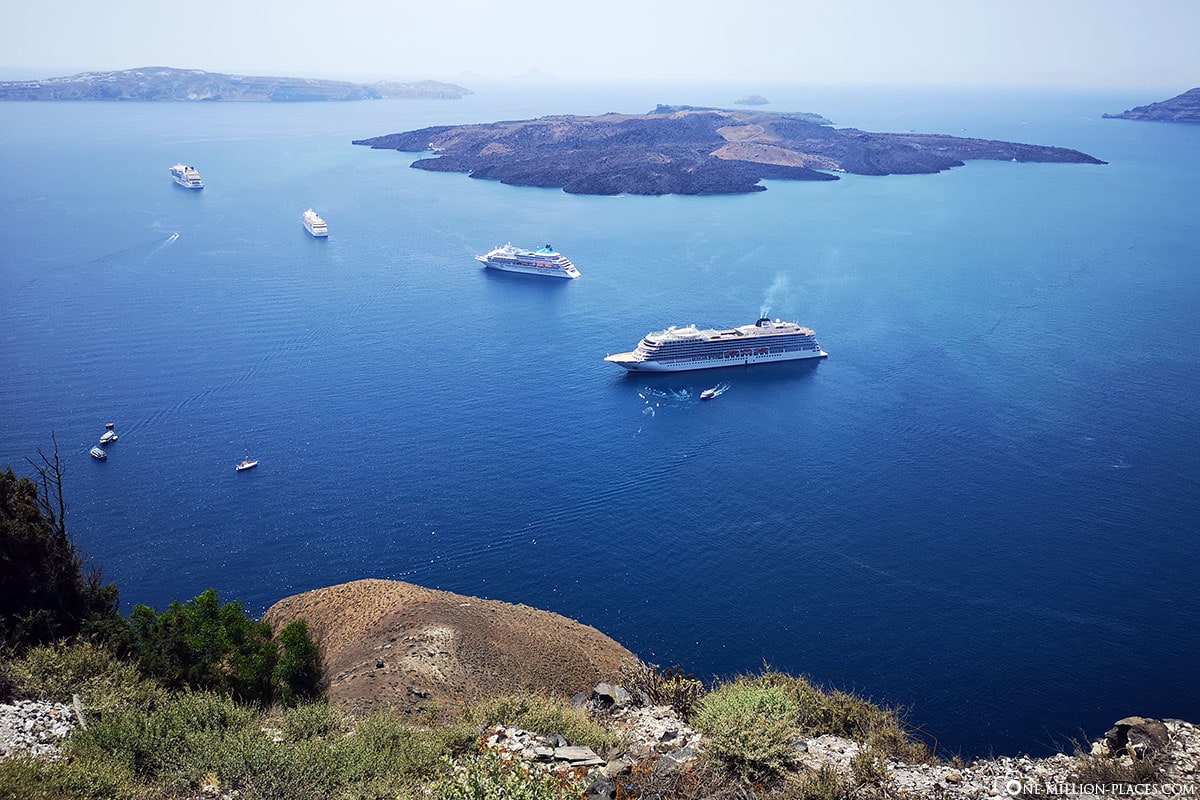 View of the Caldera and the cruise ships off Santorini

The Old Port of Fino

Our ship Celestyal Crystal entered the caldera in the morning and laid the anchor at the foot of the capital, Firé. By boat from the island we were then picked up from the ship and taken to the valley station of the cable car, which is located at the old port. By the way, cruise ships here are forbidden to use their own tender boats. The reason is relatively simple: this brings additional income to the island and creates jobs.

View from the tender boat to the cliffs of Fira

By cable car from the old port to Firo

Probably the easiest and fastest option is to ride the Santorini Cable Car. A one-way ticket costs 6 euros per person. The Austrian cable car was opened in 1979 and can carry up to 1,200 people per hour. Within 3 minutes you can reach the beautiful town of Firo, which is 220 meters above sea level.

A tourist attraction on Santorini is to ride by donkey or mule from the old port up to Firo.

Although historically this was certainly the only way to transport the goods from the old port along the steep cliffs to Fino, today we would advise everyone not to use the Donkey Tour. We have certainly seen 100 donkeys and mules at the valley station and up in Fito, which stand every day in the blistering heat, close to dense, without food and above all without water. Many donkeys and mules seemed almost disturbed and pushed themselves against the rocks, probably in search of some shade. Some of the animals have muzzles, some don’t.

Of course, the donkeys and mules give a great photo motif and are certainly also a tradition for the locals on the island. There will also be some families who live off it. But when we walked the stairs through the “Donkey Alley” our impression was that this is an absolute animal cruelty. Unfortunately, we have seen a lot of tourists on our way who have used this “means of transport” for the way.

A press release from the Santorini Animal Welfare Association shows that this is not the only way we feel about this:

Mainz, 10 October 2015. The front page of today’s BILD laments the death of a German tourist who was trampled dead by a donkey on Santorini. What no one knows: It is not the owner of the donkey who is now being sued who is to blame for this tragic death, but the island government. It has allowed the donkeys to be used in an animal-cruel manner for the transport of tourists, which has repeatedly led to minor accidents. We have been pointing out the problem with the donkeys in Thira for years. As our pictures show, these are driven every day in scorching heat without water the long steep way from the harbour up to the city of Thira and driven down again at an even faster pace in order to be able to charge the next tourists. The exhausted, sweaty, rear-powered animals have hardly any opportunity to pay attention to the additional tourists running there. They run down the cobblestones and inevitably push some pedestrians against the wall. Apart from the fact that this is absolute animal cruelty, it is life-threatening for humans. It was only a matter of time before such a tragic accident happened. Susanne S. (67) was on foot with her husband on this dangerous route – in contrast to the report of the Bildzeitung – and tragically died because she was overrun by a donkey. This should not have happened. But the island government has not taken care to comply with the current animal welfare rules, nor has it closed this dangerous route to pedestrians. Tierschutzverein Santorini

As we walked down the stairs into the valley, two groups of tourists with donkeys came to meet us. And it is definitely true that the donkeys don’t really care if you meet as a pedestrian. The tourists can not steer the donkeys in this case either, they go strictly on their way. So you should be a little careful here and definitely go to the side in time!

The 588 steps of the Karavolades Staircase

For us it was clear from the outset: we are running 🙂

The serpentine-like Karavolades staircase connects the capital, Firo, withthe old port within 588 wide steps. On the path, which runs right next to the cable car, there are some resting places, so that you can stop again and again and enjoy the breathtaking view of the Aegean Sea. We recommend using the steps on the way down – this is much more relaxed than having to walk up in the blazing sun. 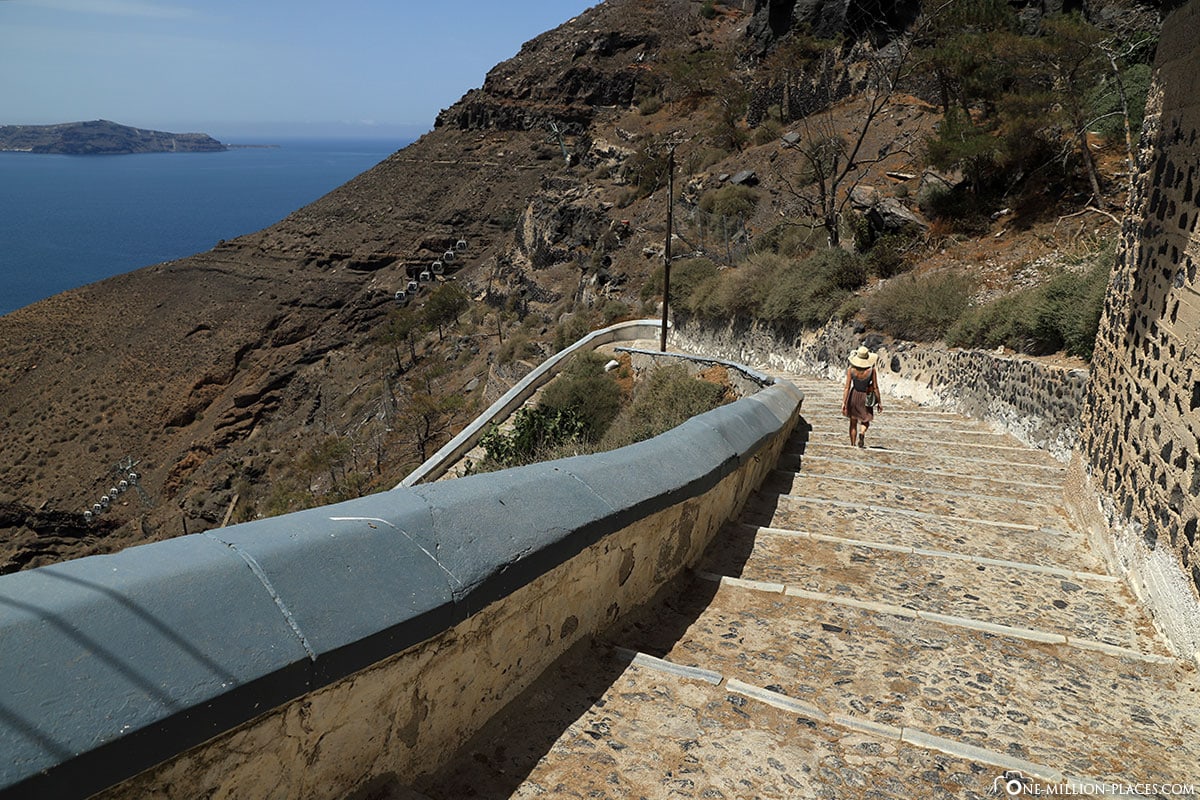 Attractions of the capital, Fino

Arriving at the top of The River, there is a breathtaking view of the Caldera of Santorini, the cruise ships and the wide sea. It is the picturesque capital of Santorini and is located on the western edge of the semicircular main island of Thira. The typical Cycladic village is home to 1,600 permanent residents living in whitewashed houses with colourful windows and doors. When we visited Firé, the central squares and streets were very crowded by tourists. It wasn’t so nice, but it didn’t stop us from looking at the small town in peace.

The first port of call in Fito was the Orthodox Metropolis Cathedral, which is prominently located on the edge of the caldera. It was built in 1827, but unfortunately later severely damaged by an earthquake in 1956. Soon after, the cathedral was completely renovated and now features a large bell tower, mosaics and frescoes, and a quiet courtyard.

After visiting the cathedral we strolled through the alleys and just let ourselves drift and let the town affect us. Again and again you have a beautiful view of the sea at the edge, but also of Firo itself. Automatically you will also come to the Roman Catholic Church of Saint John the Baptist, which is also located in the centre of the city. The church was built in 1823 and completely restored and rebuilt in 1970, after the earthquake of 1956. The church building and the bell tower are painted in the colours cream-orange as well as blue-grey.

One of the most photographed motifs in the whole of Fito, however, is definitely the Assumption of the Blessed Virgin Mary Catholic Church, which at first glance looks really very inconspicuous from the way. The real highlight, however, is the view of the blue dome from above. To do this, you have to climb a small hill above the church. The path is easy to find, because the lookout point is well signposted. Strangely enough, the vantage point wasn’t as crowded as we thought: there were two wedding couples there doing a shoot and a few individual tourists.

Apparently few people find their way up here. The view is sooooo insanely beautiful. We took half an hour of photos and couldn’t see enough: the white houses, the bright blue dome and the sea in the background. 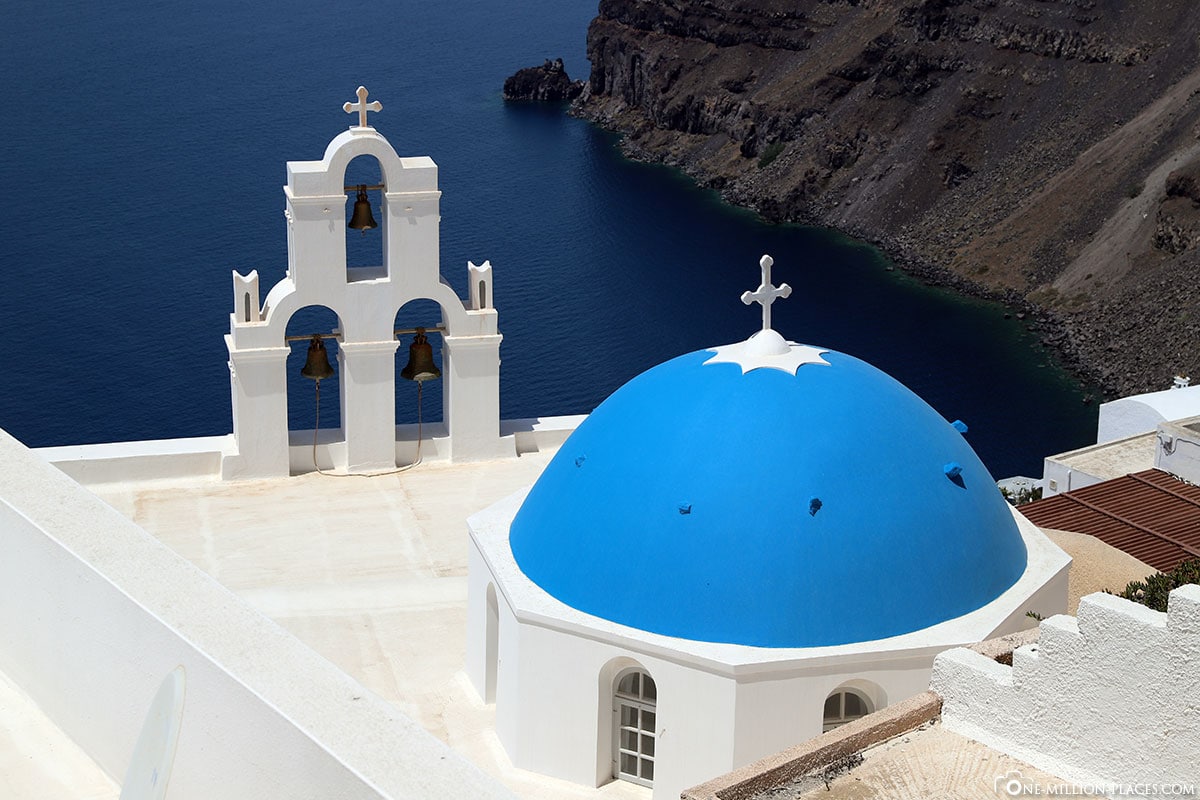 The Assumption of the Blessed Virgin Mary Catholic Church

A map of Santorini

Here we have drawn all the stations we visited in our 2 days on Santorini: