After looking at some sights along Highway 1 this morning, a visit to the pompous Hearst Castle was on the agenda this afternoon.

Things to know about the Hearst Castle

Hearst Castle is a castle-like propertylocated above the Pacific Coast Highway near San Simeon, built and inhabited in the 1920s by newspaper magnate Willliam Randolph Hearst. 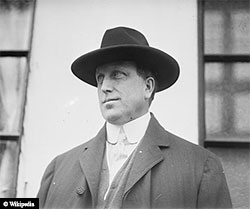 The history of Hearst Castle begins as early as 1865, when George Hearst bought 40,000 hectares of land near San Simeon. After his mother’s death in 1919, the newspaper publisher William Randolph Hearst inherited this land and bought additional land, so that it was ultimately 250,000 hectares. His plan was to convert his parents’ estate into a stately estate. And so he and the architect Julia Morgan designed a property he called ‘La Cuesta Encantada’ (Spanish for ‘Enchanted Hill’). During the construction of the castle, the client and his architect orientated themselves on different European architectural styles. Some even imported original building material from Europe; for example, Hearst removed an entire suite from a Spanish palace.

Some Hollywood stars and the political elite often visited Hearst Castle in the 1920s and 1930s. Hearst’s guests included Charlie Chaplin, Franklin Roosevelt and Winston Churchill. At the time, it was a fixed rule that each of his house guests appeared for a formal dinner.

In 1937, Hearst ran out of money. By 1947, when Hearst had to leave the remote site because of his health, the estate was still unfinished, although the castle, which cost USD 37 million, already included 165 rooms, numerous outbuildings, 127 acres of gardens, a cinema, terraces, pools and sidewalks – all built according to Hearst’s specifications and equipped with a large art collection. The property also included the largest private zoo in the world with exotic animals at the time.

William Randolph Hearst died in 1951, and in 1958 the Hearst Corporation donated the estate to the state of California. One condition for the Donation of the property by the Hearst Corporation was that the Hearst family be allowed to use it at will. Hearst Castle joined the National Register of Historic Places on June 22, 1972, and was designated a National Historic Landmark of the United States on May 11, 1976.

Hearst Castle is located near San Simeon, about 400 kilometers from Los Angeles and San Francisco, at the northern end of San Luis Obispo County. The property itself is located eight kilometers inland on a hill of the Santa Lucia Range at an altitude of about 490 meters. The area around the castle is relatively sparsely populated. There is really no more than bleak land. 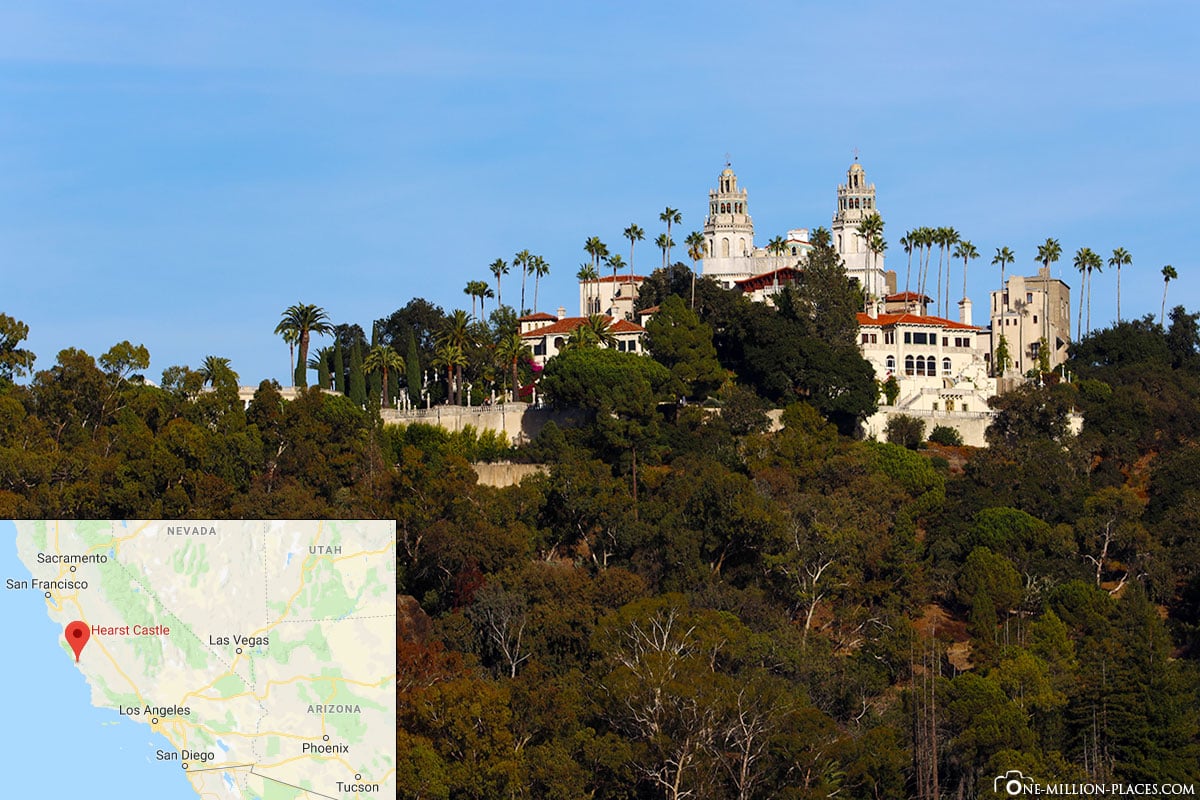 The location of Hearst Castle in the Santa Lucia Mountains

If you want to visit Hearst Castle, you can get from Highway 1 to the free car park and the visitor center. From here, the bus shuttles depart, which take the tourists up to Hearst Castle. It is not possible to drive your own car to the castle.

In the shuttle bus you can find all sorts of information about the builder William Randolph Hearst and his history. At the castle, the buses then leave at regular intervals directly in front of the Roman indoor pool to the visitor centre. In the visitor centre, every guest has the opportunity to watch the film Hearst Castle – Building the Dream, which is shown here free of charge every 45 minutes in a cinema.

The only way to visit Hearst Castle is through a guided tour. It is not possible to visit the castle alone. These tickets can be purchased up to 60 days in advance at the local visitor center or online on the official website of California State Parks. The times of the Hearst Castle tours vary depending on the season, with tours starting at 9am on most days. Hearst Castle is closed on Thanksgiving, Christmas Day and New Year’s Day.

Various tours are offered to explore the property, so there is something for everyone. Probably the most famous and best-selling tour is the Grand Rooms Tour for 25 USD per person. There are also other, more special tours, such as the ‘Upstairs Suites Tour’, the Cottages & Kitchen Tour, the ‘Art of San Simeon Tour’ and many others. An overview of all tours including ticket prices can be found on the official website of Hearst Castle.

A map of the castle

Here you can see a map of Hearst Castlethat gives a nice overview of the property. We have also made the map available for download here.

A map of Hearst Castle

We chose the Grand Rooms Tour, which is recommended for people visiting Hearst Castle for the first time. The tour takes about 60 minutes and you walk a total of about 1 kilometer on the terrain and in the house.

The 6,300 m2 main house La Casa Grande has several floors and consists of a total of 115 rooms. With our guided group we entered the building through a side entrance and took a tour of the meeting room, the refectory, the room, the billiard seam and the theatre. 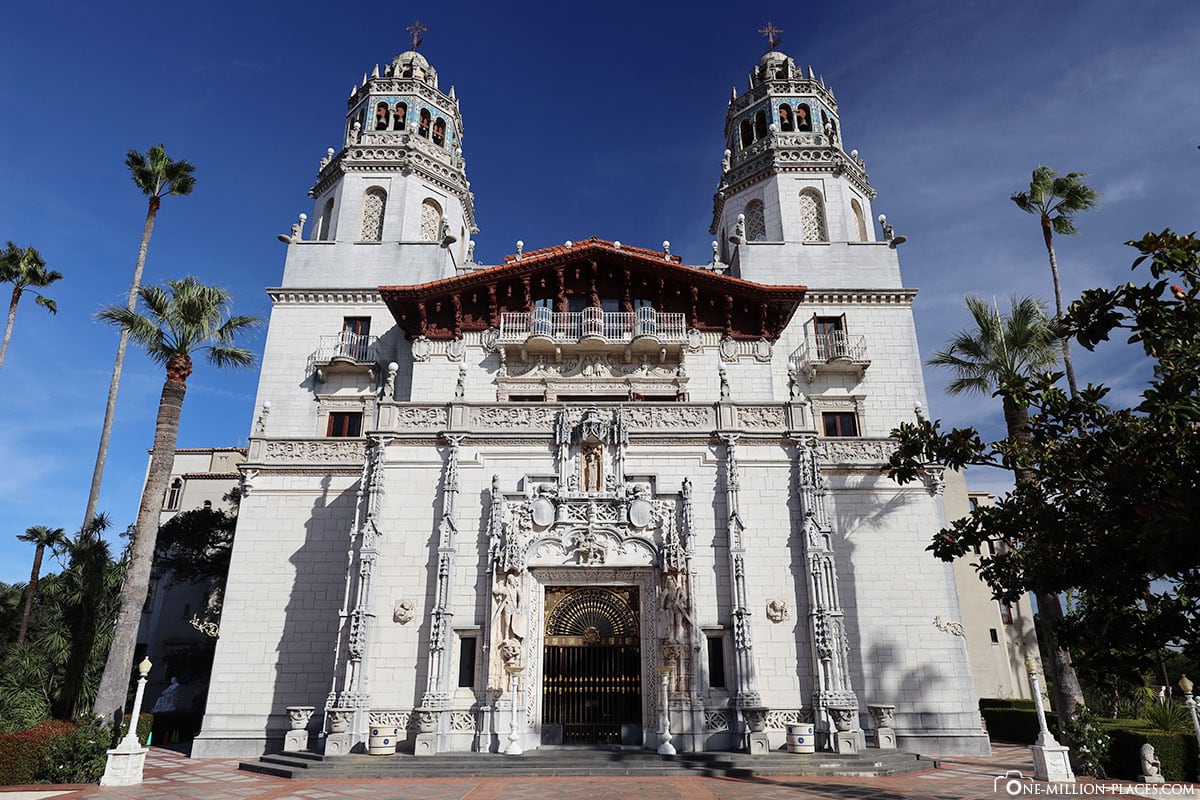 The large rooms in the main house

The first room on the ground floor is the so-called Assembly Room, where Hearst’s guests used to meet with their host for talks and cocktails. The room is filled with all kinds of works of art – both on walls and ceilings – from different eras, so that at first you don’t know where to look first. The room is huge and looks very magnificent.

The dining room that followed was called a refectory, as a dining room in monasteries. The high windows, bright silk banners and shiny silver candle holders give the room a medieval atmosphere. The billiards room was a popular spot at Hearst Castle where guests could relax. The room features a 15th-century Spanish ceiling painted with scenes from courtly life, as well as a Flemish tapestry from 1500. In the theater, Hearst met with his guests every night to see a full-length film and a weekly show.

At the stop, where you return by bus to the visitor center, is the Roman indoor pool. Following the example of ancient Roman baths, this pool was tiled with coloured mosaics. Around the pool there are eight marble statues of Roman and ancient Greek gods and heroes. We particularly liked the reflection effects that have resulted here due to the intense colours and the smooth water surface.

The turquoise-blue shimmering Neptune pool is the outdoor pool on the grounds of Hearst Castle and includes other fountains, ornamental pools, sculptures, marble pavilions and lanterns in the immediate vicinity of the pool, in addition to the swimming pool.

Due to a drought in Southern California, the pool was drained in 2014 because it was leaking and, on the other hand, a lot of water evaporated due to the dry season. In 2017, extensive renovations began to replace the tiles and fix leaks. We were really lucky during our visit, as the pool renovation was only completed in August 2018 and the pool was filled with water again after two years of restoration.

The guest bungalows & the outdoor area

On the grounds of Hearst Castle there are three guest houses,which Hearst has designated after their view: Casa del Mar, Casa del Monte & Casa del Sol. The guest houses were the first buildings on the property and were used by guests of the house as well as the family. All three guest houses have bedrooms, living and bathrooms. However, there was no kitchen or dining room, as Hearst’s rule was that you should have dinner together in the main house.

On the property there is also a tennis court as well as many sculptures and fountains.

When we took our shuttle bus up the mile-long road to Hearst Castle, there wasn’t much to see on the route. This used to be different in the heyday of Hearst Castle, because at that time there were exotic animals on the right and left of the road.

It’s hard to believe, but Hearst had built the world’s largest private zoo on this site at the time. There were animals kept in cages, such as bears, lions, tigers, leopards, jaguars, pumas, chimpanzees, orangutans, monkeys, swans, storks, a tapir and an elephant. But there was also a large fenced enclosure where the animals could move relatively freely. There were llamas, kangaroos, ostriches, emus, deer, giraffes, oxen, deer and sheep.

When Hearst ran into financial difficulties, he began dismantling the zoo in 1937. This included donating or selling many of his animals to public zoos. Today you can still see the remains of this private zoo, when you take the shuttle bus back down to the visitor center and pass the old bear cages. There are also some zebras grazing in the pastures along Highway 1 near San Simeon. It’s kind of weird to see zebras in California – but somehow it’s also totally cool 🙂 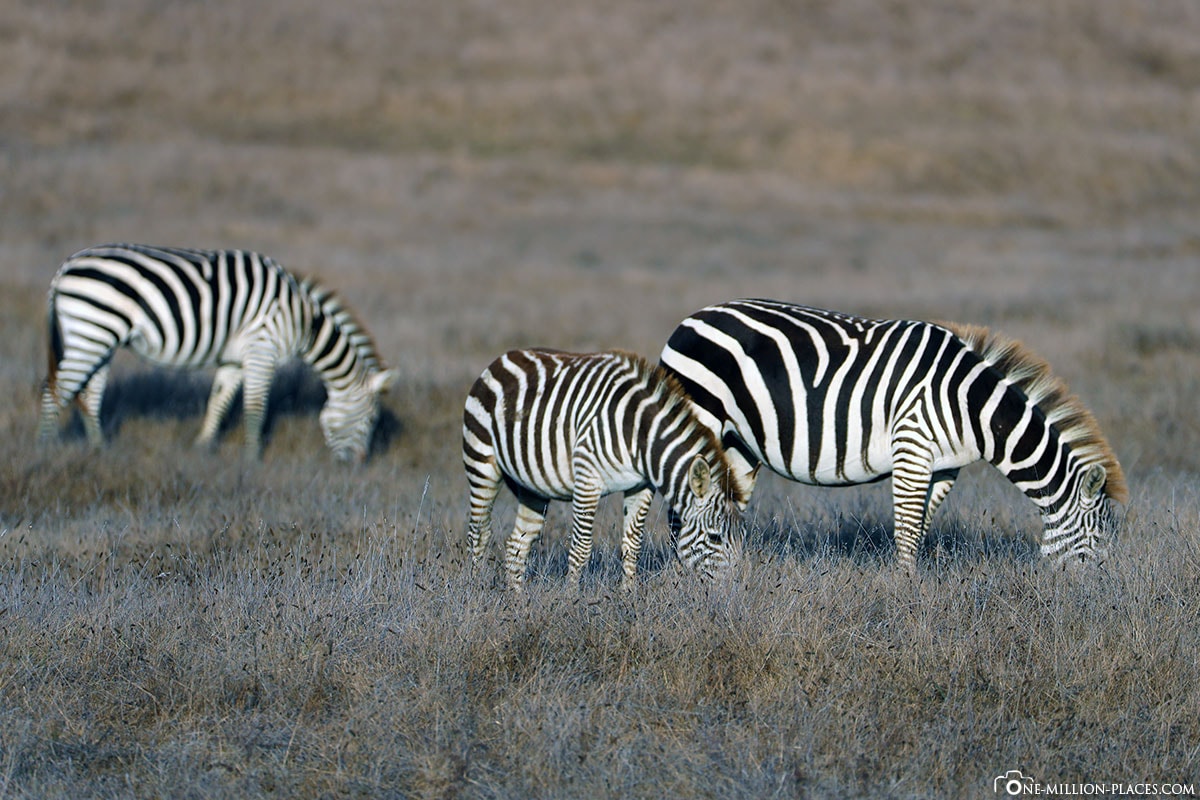 Zebras on the grounds of Hearst Castle