On a beautiful sunny day in May, which was also a public holiday, we set out to explore our surroundings a little more. Our day trip took us to the Upper Middle Rhine Valley and the adjacent Rheingau ❤

The Upper Middle Rhine Valley, which is located on the border of the two federal states of Rhineland-Palatinate and Hesse, extends up the Rhine in the southeast between Bingen and Rüdesheim and down the Rhine in the northwest to the Lahn estuary in Lahnstein, above Koblenz – on a length of 65 km along the breakthrough valley of the Rhine through the Rheinische Schiefergebirge.

On 27 June 2002, the cultural landscape of the Upper Middle Rhine Valley was added to the UNESCO World Heritage List. In doing so, UNESCO recognized this region as a landscape of great diversity and beauty with a wealth of cultural testimonies and artistic associations. Here you will find beautiful monuments, extensive vineyards, about 60 small towns and the approximately 40 high-altitude castles lined up on rocky outcrops, which were built during the last 1000 years. The epitome of Rhine romanticism ❤

Today we explored the area of the Upper Middle Rhine Valley marked in red in the map in 11 hours as part of our day tour. We have also mapped the individual sights on the following Google MyMaps map. 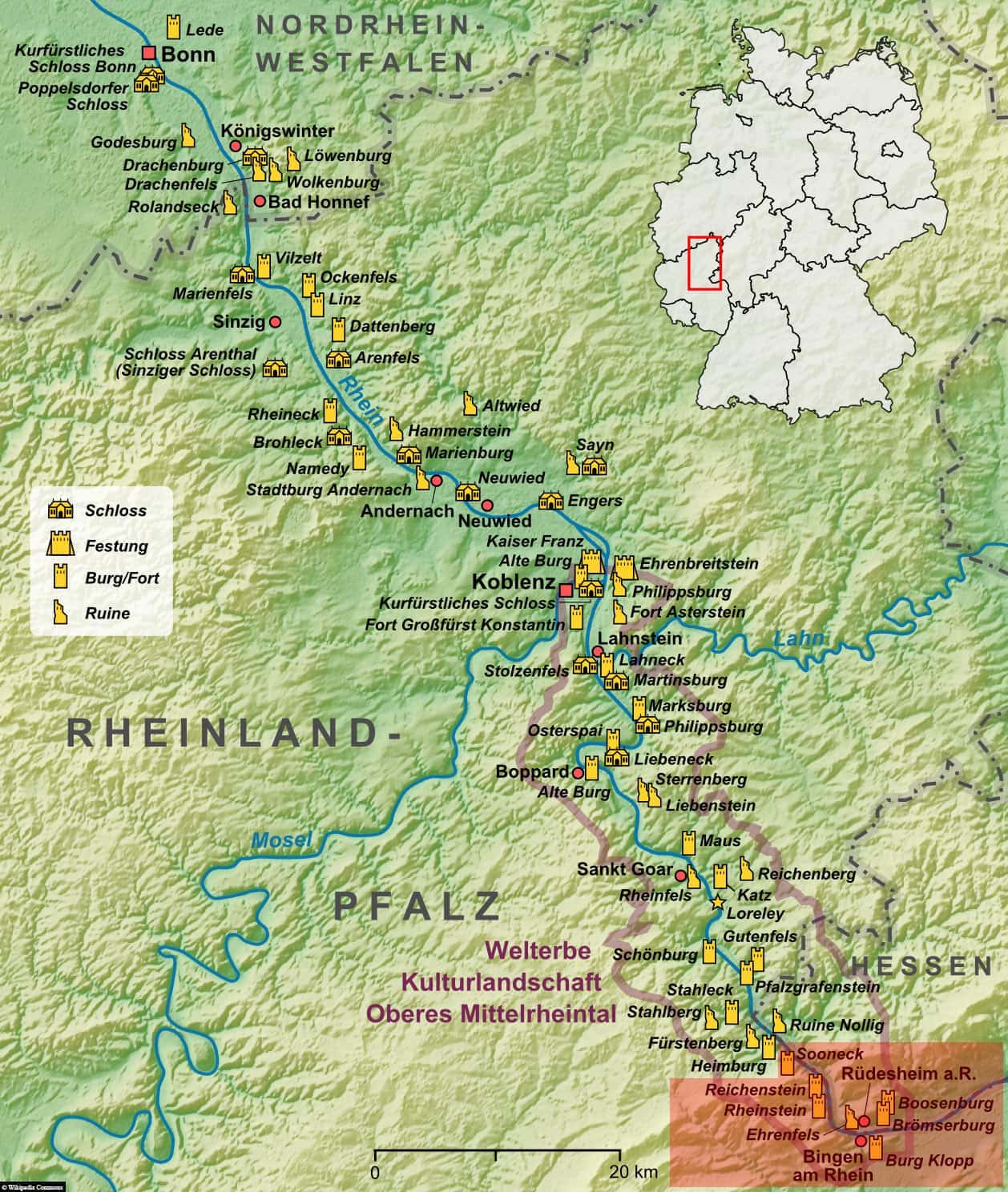 Our first port of call on the left bank of the Rhine was the town of Bingen am Rhein. From here we were able to see some sights on the 13 km long route to Niederheimbach.

The 27,000 inhabitants town of Bingen stretches along the picturesque banks of the Rhine and forms the gateway to the Upper Middle Rhine Valley. We have looked here at the castle Klopp, built between 1240 and 1277, which is situated on a hill in the middle of Bingen. Today, Klopp Castle is part of the City council of Bing, including the mayor’s office.

From Klopp Castle, in the distance you can see the Binger Mauturm, a former defensive and watchtower located on the Mauturmisland in the middle of the Rhine. The 24 m high mausturm, built at the beginning of the 14th century, got its name from a legend in which the Archbishop of Mainz Hatto was allegedly eaten by mice.

By car we continued along the Rhine to the north to the Romantik-Schloss Rheinstein, which is located on a 90 m high rock spur directly on the Rhine. We were here before opening, so we could get one of the parking spaces directly on the street below the castle. Parking is free for two hours – this time is enough to visit the castle, the museum and a nearby viewpoint.

The castle complex is privately owned and you can visit it for an entrance fee of 6 EUR per person. As a rule, you can explore the castle on your own and can orientate yourself here on the basis of a signposted tour, for which it takes about 45 minutes. On our tour of the castle, built in the early 14th century and now beautifully restored, we were able to discover all sorts of things: stained glass from the 14th to the 19th century, wall and ceiling frescoes, antique furniture from the 17th and 19th centuries, armour from the 15th century, a neo-Gothic chapel with Prussian tomb, as well as gardens and terraces with a fantastic view of the Rhine Valley.

Our tip: Just above the castle complex runs the Rheinburgenweg (see Google Maps). It is worth walking a bit south, because after only a few minutes you reach an old watchtower, from which you have a fantastic view of the castle Rheinstein and the Rhine Valley.

Just 2 km from Rheinstein Castle is the nearest imposing medieval castle complex: Reichenstein Castle, situated on a rocky outcrop and surrounded by vineyards, near the wine-growing village of Trechtingshausen. The entrance fee for visiting the castle complex is EUR 8.50 per person.

The origin of Reichenstein Castle can be traced back to the beginning of the 11th century; the first documentary mention of the castle, however, dates back to 1213. Over the centuries, Reichenstein Castle had an interesting history from the foundation building on the land of the Kornelimünster monastery to the Raubritterburg castle, to the ruins over a residential castle to the present museum. Since 1899, the Kirsch-Puricelli family and its descendants have been in the possession of Reichenstein Castle.

A tour of the castle complex follows in the footsteps of earlier times: antique furniture, ancestral galleries, minion and knight’s armour, one of the largest collections of antlers in Germany, weapons and guns from the time of Napoleon I, as well as a unique collection of historical furnace and took plates can be admired here. From the outdoor facilities you can again enjoy a fantastic view of the Rhine.

Castle Sooneck & the ferry across the Rhine

The fourth castle, which we passed on the left bank of the Upper Middle Rhine Valley, is the castle Sooneck. We did not visit them, but only looked at them from a slightly distant vantage point.

The castle towers above the Rhine on the northeastern slope of the Binger Wald not far from Niederheimbach. After the first mention in 1271, the complex was conquered, destroyed and rebuilt over the centuries. After the First World War, Sooneck Castle became state-owned; After the Second World War it was sent to the state of Rhineland-Palatinate and from 1948 to the State Palace Department of Rhineland-Palatinate.

From here we went to the car ferry in Niederheimbach. This costs 4.80 EUR for a car (incl. driver) and 1.50 EUR for each passenger. The ferry runs on a regular basis, so the waiting times are very short.

Right Rhine Site: from Lorch to Eltville am Rhein

After we arrived in Lorch by ferry, our route continued south. Always along the Rhine we explored the route from Assmannshausen to Eltville with all its sights and photo spots.

Assmannshausen is a small, picturesque place directly on the Rhine with just 1,000 inhabitants. Both tourism and viticulture characterize the “red wine village”. With 75 hectares of vineyards, the municipality has the largest contiguous late burgundy area in Germany. The vines grow here in sun-drenched steep slopes directly above the Rhine, whose slate-containing soil provides a particularly racy wine. A tourist attraction in the village is a ride on the chairlift to the niederwald hunting lodge. During the trip you have a wide view over the Middle Rhine Valley near Rüdesheim, Bingen, the Nahe and Bingerbrück. Once at the top, you can reach the Niederwalddenkmal via a 30-minute hiking trail.

Halfway between Assmannshausen and Rüdesheim is the ruins of Ehrenfels Castle, which was once a customs castle of just under 600 square metres. What remains are the 4.6 m thick and 20 m high shield wall with its two 33 m high corner towers as well as remnants of the Palas and a Tobaus. If you walk along the RheingauRiesling Trail, you pass the castle ruins, which are no longer accessible to visitors today.

The wine-growing town of Rüdesheim am Rhein is probably the most visited city in the Rheingau: Every year, more than 3 million visitors crowd through the streets of the town, which has just about 10,000 inhabitants. Finding a free parking space here on a public holiday is a miracle 😉

We parked our car near the Brömserburg, which is the oldest castle in the UNESCO World Heritage Site “Upper Middle Rhine Valley”. At the moment you can’t visit the castle again due to restoration work, but in fine weather you can enjoy the atmosphere in the garden of the castle with drinks & snacks. In the immediate vicinity of the Brömserburg is the Boosenburg, from which the 38 m high tower has been preserved. Since 1938, the castle has been owned by the Carl Jung winery, which also includes a beautiful rose garden.

From here we walked along the Rhine promenade, to a junction that led us into the famous Drosselgasse. In the 2 m wide and about 144 m long, cobbled street there are numerous wine gifts as well as gift shops and souvenir shops. Other sights in Rüdesheim include the 15th-century Klunkhardshof, one of the oldest buildings in the city, the market square, the parish church of St. Jakob from the 15th century and the cable car that leads to the Niederwald denkmal.

It took us about an hour to tour Rüdesheim. If you want to sit down in peace in a restaurant or café and watch the colourful hustle and bustle on the streets, you should plan more time for a visit.

High above the town of Rüdesheim is the 38 m high and 75 t heavy Niederwalddenkmal. It is located on the edge of the Niederwald Landscape Park and at its feet are the vineyards of the Rüdesheimer Berg. The monument, inaugurated after 6 years of construction in 1883, is intended to commemorate the German-French War of 1870/71 and the subsequent foundation of the German Empire on 18 January 1871. The monument consists of several different sculptures and reliefs, including the 12.5 m high Germania, which stands on a pedestal.

To get from Rüdesheim to the Niederwalddenkmal, there are several options:

Cable car: From the city centre of Rüdesheim you can easily ride in a gondola up to the monument. The price for a return ticket is 9 EUR.
Hike: If you would like to be active, simply follow the marked access road of the Rheinsteig up to the Niederwalddenkmal from Rüdesheim. The trail leads through the beautiful vineyards and takes about 30 to 40 minutes, depending on the walking pace.
Car: From Rüdesheim you can reach the parking lot near the Niederwalddenkmal within 7 minutes by car. Parking fees are 4 EUR, but you can park here for the price all day.

Once at the top, you should not miss a visit to the round temple in the Niederwald Landscape Park. And the best thing is that of all points you will be rewarded with a wide view into the Rhine and Nahe valleys 😊

Schloss Johannisberg is a winery in Geisenheim, which is rich in tradition and is about 35 hectares in size, which is one of the best in the Rheingau. Only Riesling is grown here.

Located directly on the banks of the Rhine, the Oestricher Kranis located 5 km from Johannisberg Castle. The baroque, wooden harbour crane was formerly mainly used for loading wine barrels, but also from other goods such as tree trunks on Rhine ships.

The monastery is run by a non-profit foundation that takes care of the operation and maintenance of the monastery, i.e. no taxpayers’ money goes into the institution. In order to generate the costs of about 10,000 euros per day for the monastery, the foundation is therefore dependent on entrance fees, parking fees, rental income and donations.

After we paid the entrance fee of 9.50 EUR per person, we walked alone over a marked tour of the extensive complex. Incidentally, the monastery of Eberbach became known worldwide because of the film “Der Name der Rose”(DVD on Amazon), which was partly shot in the monastery in 1986.

The last stop of our day trip leads us to Eltville am Rhein, with 17,000 inhabitants the largest city in the Rheingau. The landmark of the city is the Electoral Castle, which is located directly on the banks of the Rhine. Unfortunately, the whole castle was equipped when we visited here, so unfortunately we could not take a photo.

All the more time we had to walk through the beautiful, cobbled streets, in which many half-timbered houses stand. It is not for nothing that Eltville is located on the German half-timbered road, which combines unique landscapes, historic locations and lovingly restored monuments over a length of around 3,500 km.

Tip: In Burgstraße there are a number of very photogenic half-timbered houses 😊