Since we only had 72 hours to visit Beijing because of our transit visa, we have put together a very tight program for the most important sights in Beijing and an all-day trip to the Great Wall of China. But that’s what we’re used to 🙂

Our Hotel in Beijing

From Beijing Airport we took the Airport Express train to the city, which costs only 3.50 euros and runs every 15 minutes. The Airport Express ends at dongzhimen stop, from where we had to take the metro before arriving at our Hotel Days Inn Forbidden City Beijing at around 9 p.m.

We spent three nights in the hotel and had a room with two beds. The room was ok in size, but a bit habitual. The bathroom was very spacious, but in some places you saw mold. The wifi worked better, sometimes worse. The reception staff was not very friendly when checking in. We were greeted with “Passports please”… no “Hello” or “Welcome”. The location of the hotel is unbeatable. It takes 8 to 10 minutes walk to the Forbidden City or the shopping street.

Our first stop today was Tiananmen Square, also called Tian’anmen Square, which is centrally located in the city, directly opposite the Forbidden City. With 40 hectares, it is the largest public square in the world. Up to a million people can gather here. When we came to the square after the security check, the crowds almost killed us. Today is Sunday and apparently half China is visiting Beijing. 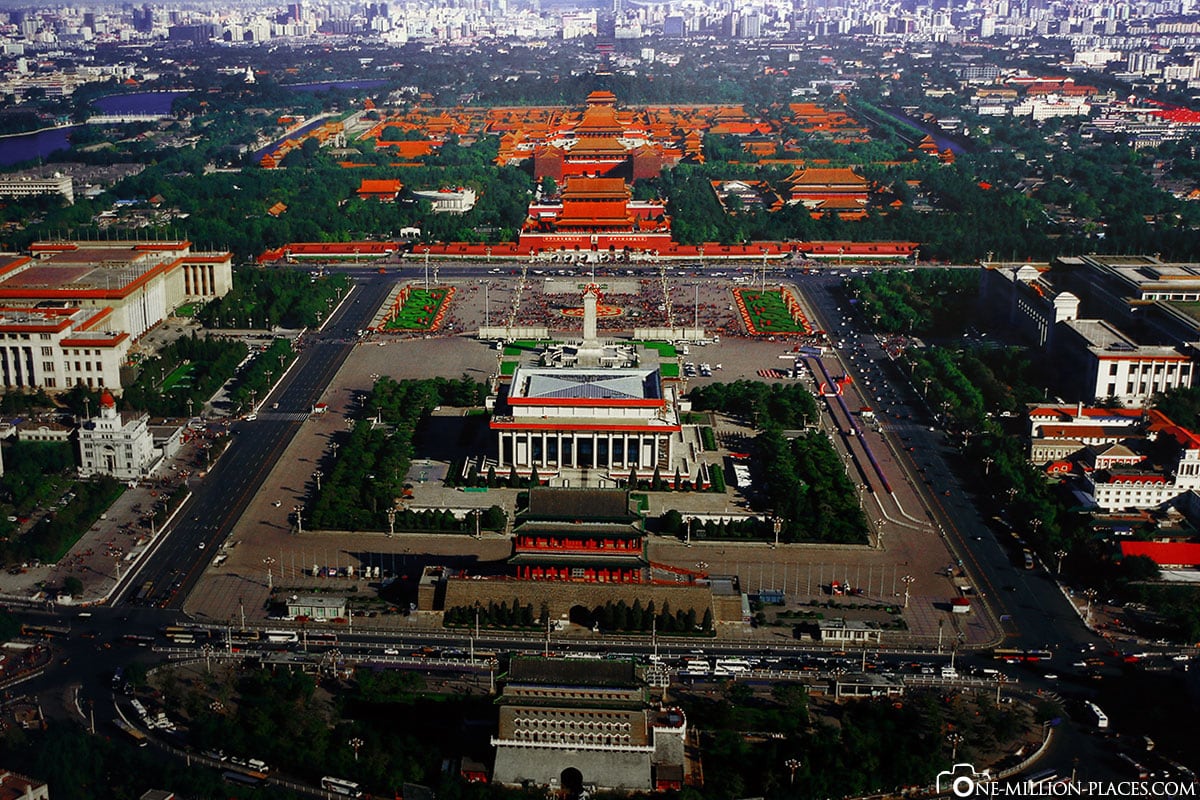 In the center of the square stands prominently the “Monument to the Heroes of the People” and the tomb of Mao Zedong. The mausoleum can of course be visited for free, but the queue today was just way too long for us. On the sides of the square there is the “Great Hall of the People” as well as a museum. There was a huge queue in front of the “Memorial Hall for Chairman Mao”. This memorial hall has served as the mausoleum of Mao Zedong since 1979, where his body was found. Even if the entrance is free, the queue was just too long for us. From the temple Qianmen, which is located at the back of the square, one had a beautiful view of other parts of the square.

From Tiananmen Square, we strolled along 800-metre-long Qianmen Street – a beautiful pedestrian street where you can mainly find souvenir shops, tea shops and restaurants.

Around the Temple of Heaven you could also watch dozens of wedding couples at their photo shoots today. The park has many other sights, such as the EchoMauer,the seven-star stones or the double pavilion.

When we left the park after two hours, it started to rain slightly.

The Starbucks City Cup of Beijing